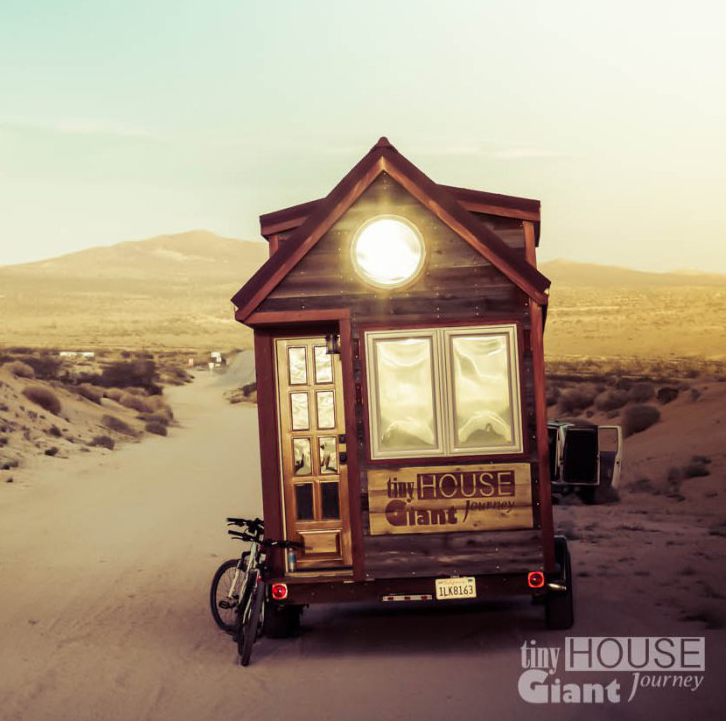 We had a baby! Well… it feels that way. What I mean is, our tiny house emerged from the driveway and received her birth certificate. She is officially DMV registered as a coach trailer. License plate and all! We are so proud. But let’s back up…

Do you remember how hard it was for us to fit the trailer into Uncle Matt’s driveway?

Well, now that we have an actual thirteen foot HOUSE on top of that trailer, multiply the level of difficulty thirteen-fold! A few tree branches had to be sacrificed, a steel rod that was encased in cement and part of the gate had to be physically sawed off, and three people had to guide Guillaume as the trailer wheels rubbed the walls on both sides of the driveway.

The amount of Austin Powers maneuvering required was astronomical. Stress levels were high. I’m telling you, it felt like labor… or what I imagine labor to feel like from the standpoint of an expecting father, helplessly watching his first born squeeze its way into this world. I wanted to faint… but instead I held my breath and watched our “baby” come out into the world.

To recap, I’m the father. I guess that makes Guillaume the midwife, and the truck… forceps? The driveway is obviously the birth canal and the dog is the annoying hormonal Aunt who cries and screams at the first sight of the baby (Salies…. Shhhhhhhh. No bark)! Whew, glad we cleared that up.

Our child’s first steps were a treacherous 1.5 mile trip to the DMV. It was a bumpy, frightening ride. I followed Guillaume and the tiny house down congested Los Angeles streets, while passers-by rubbernecked to see this strange house on wheels.

I was petrified by every creak, bump, and sharp turn. Will she fit under that branch or that telephone pole? Somehow she waddled down the road unscathed, that is, until Guillaume went over a rather large pothole (thanks Los Angeles!). That’s when the trailer broke free from the truck.

And then proceeded to skid for about fifteen feet.

I knew something bad had just happened, but I wasn’t sure if I should be scared or devastated. After what felt like an eternity, Guillaume got out of the truck.

“She detached herself from the trailer.” He said calmly.

“What???” I was so confused. How could that be possible?

Luckily there was no real physical damage aside from a slight bend in the trailer tongue jack and a long scratch in the pavement. We certainly left our mark! But the embarrassment of holding up traffic, WITH A HOUSE, in Los Angeles rush hour? I don’t think my cheeks could have been pinker.

The problem had been that we left in such a hurry we forgot the trailer lock pin!

What kind of parents are we???? The new kind, that’s what.

Aside from that hiccup, our maiden voyage went off without a hitch (see what I did there? Hold the applause please). We confirmed that Tumbleweed has made a mighty fine trailer (read our review about it), and our tiny house received her papers. Does that make her more of an American Citizen than Guillaume?? I wonder. . .

After the excitement of an almost crash and burn on our first flight , we thought: why not take a spin up the coast?

We took her down the Pacific Coast Highway, but before the road started winding we turned off at Sunset Blvd. and headed north for an unexpected dirt road adventure. Yes, we like to press our luck.

Salies and I jumping for joy at the end of the world!

Our first adventure was full of surprises, and it’s only a taste of the crusade to come.

Hopefully you’ll check back in soon because our Giant Journey is about to begin!

Thank you to our Sponsors: Dometic, Onduvilla, E&K Vintage Wood, BuyMyDoors.com, Screw Solutions, and Live Edge Naturals. Find out how you can become a sponsor here!