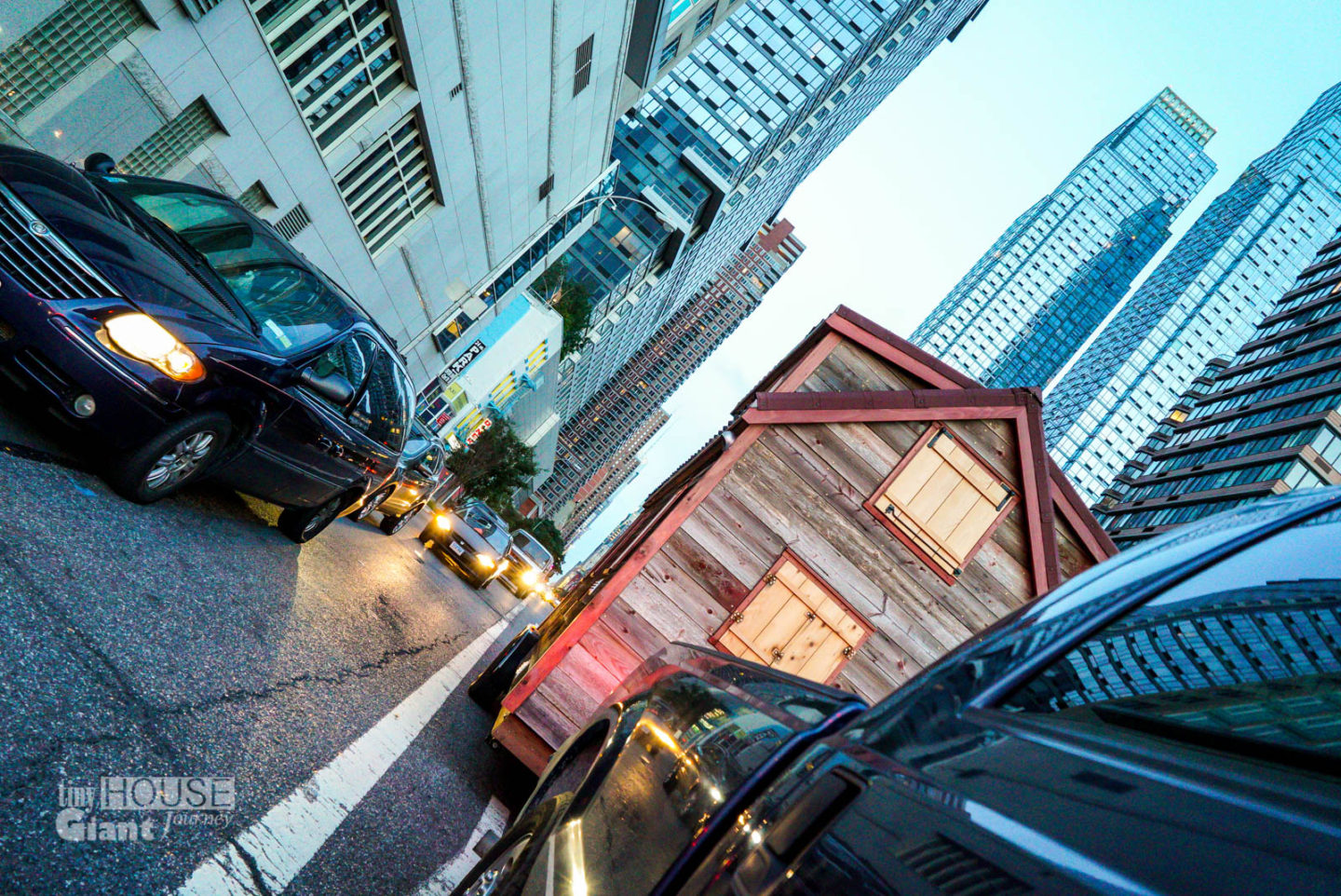 New York! Oh how I’ve dreamed of meeting you my entire life. And here we are: you with all your poise and prestige and me, with my tiny home.

Guillaume and I giggled as we squirreled our way through New York’s rush hour traffic, high on the excitement of doing something utterly stupid. Are we really pulling our tiny home through downtown Manhattan? Yes, we are. Because we can’t turn around now.

It took what locals would no doubt describe as a miserable hour to get to central park, yet I was enthralled by every pothole. And there were many, many potholes. We dodged thousands of pedestrians, yet we received fewer reactions than we have in other locations. Everyone seemed to be in frantic hurry, too numb to constant cacophony enveloping them to notice our strange “redneck-cabin-on-wheels.” We slipped by relatively unnoticed.

Rattling and shuttering, our tiny home entered the oddly serene oasis in the heart of the city. Central Park is enormous and full of surprises. At sunset I sat down by a murky green pond, watching as other tourists rowed by in rented boats. A woman from Texas gave me a piece of bread, which I shredded and donated to a family of happy turtles hovering just below the water’s surface. Guillaume, Salies and I strolled through the park’s winding paths, past a few of my favorite fairy-tale characters depicted in brass and across strawberry fields. 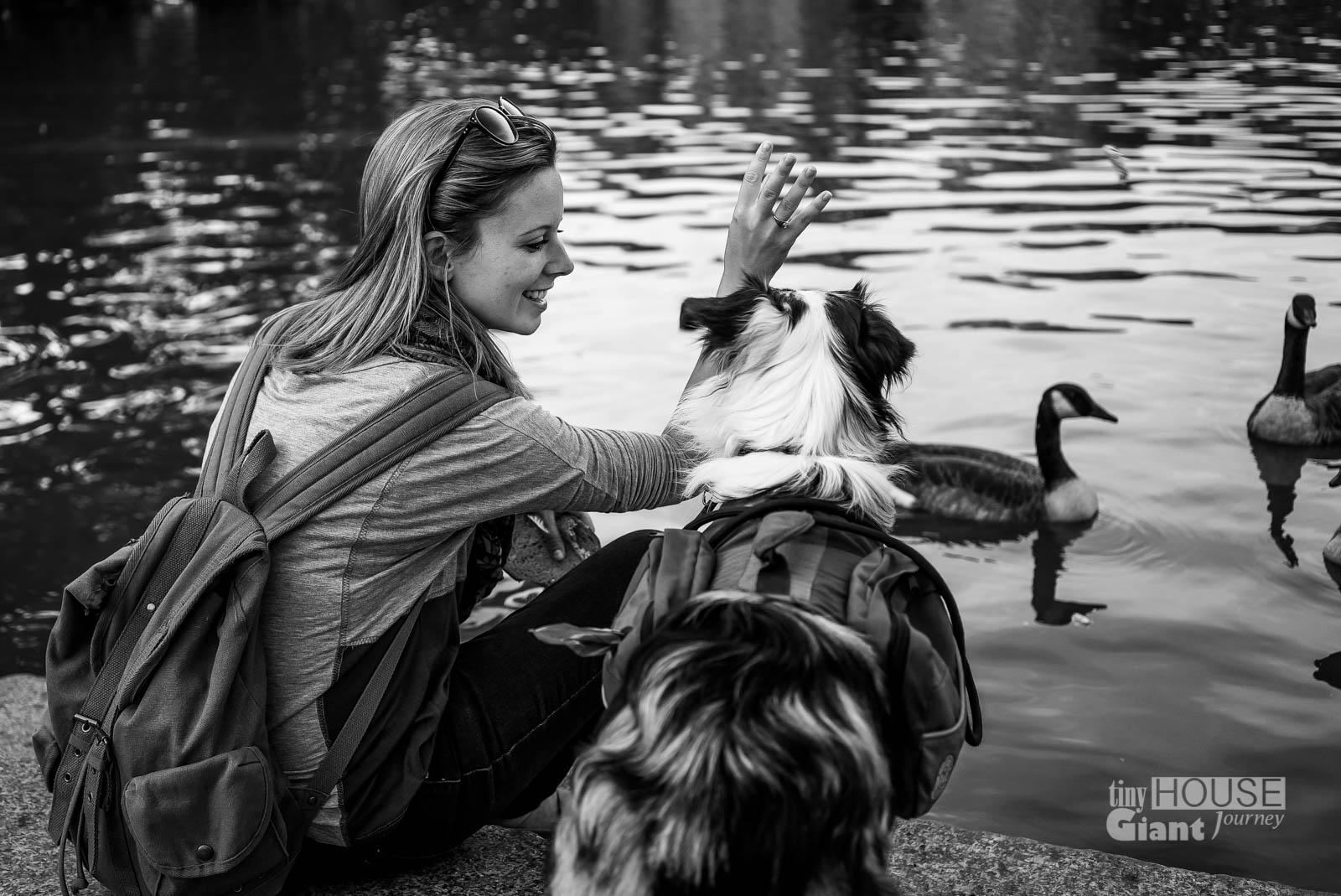 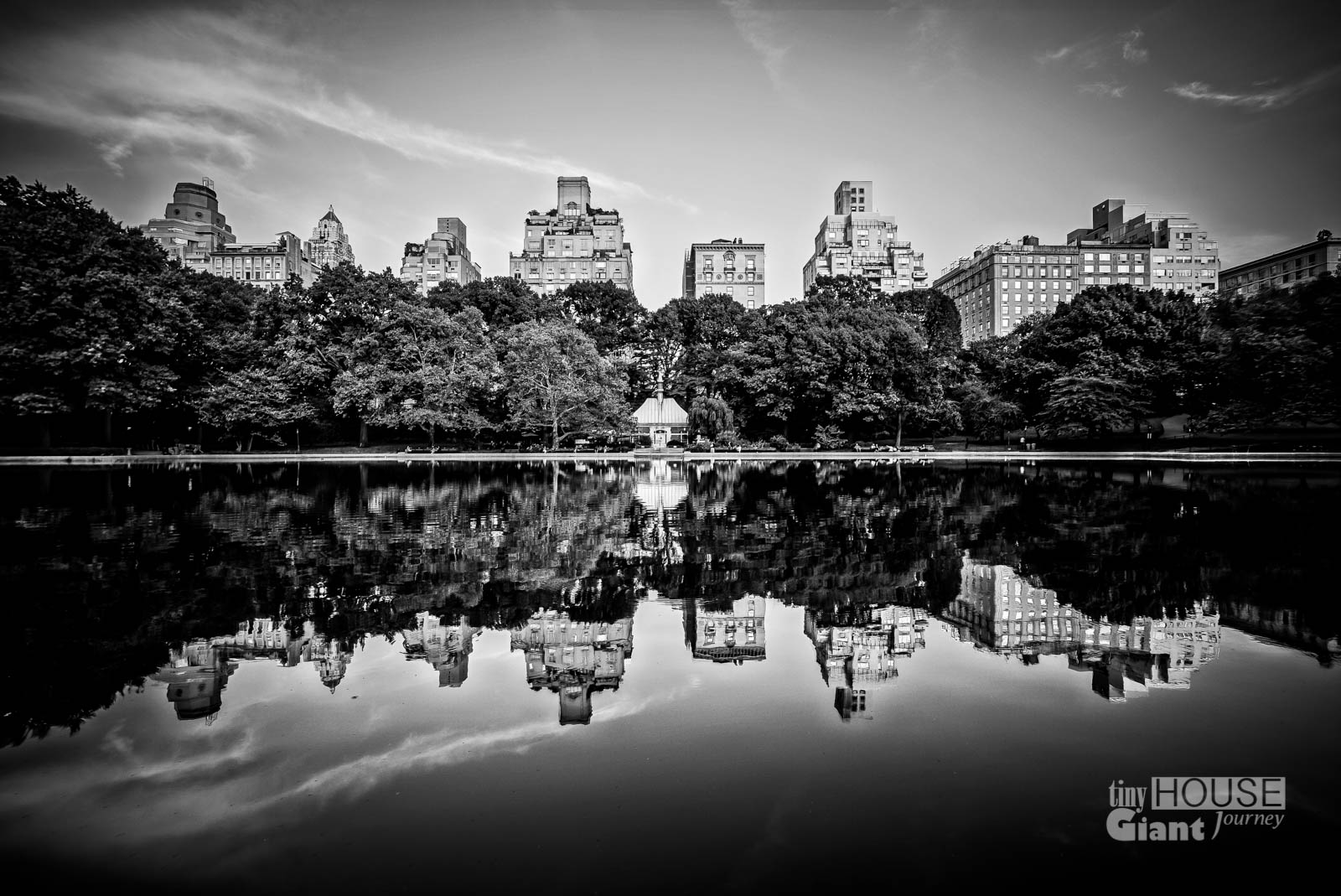 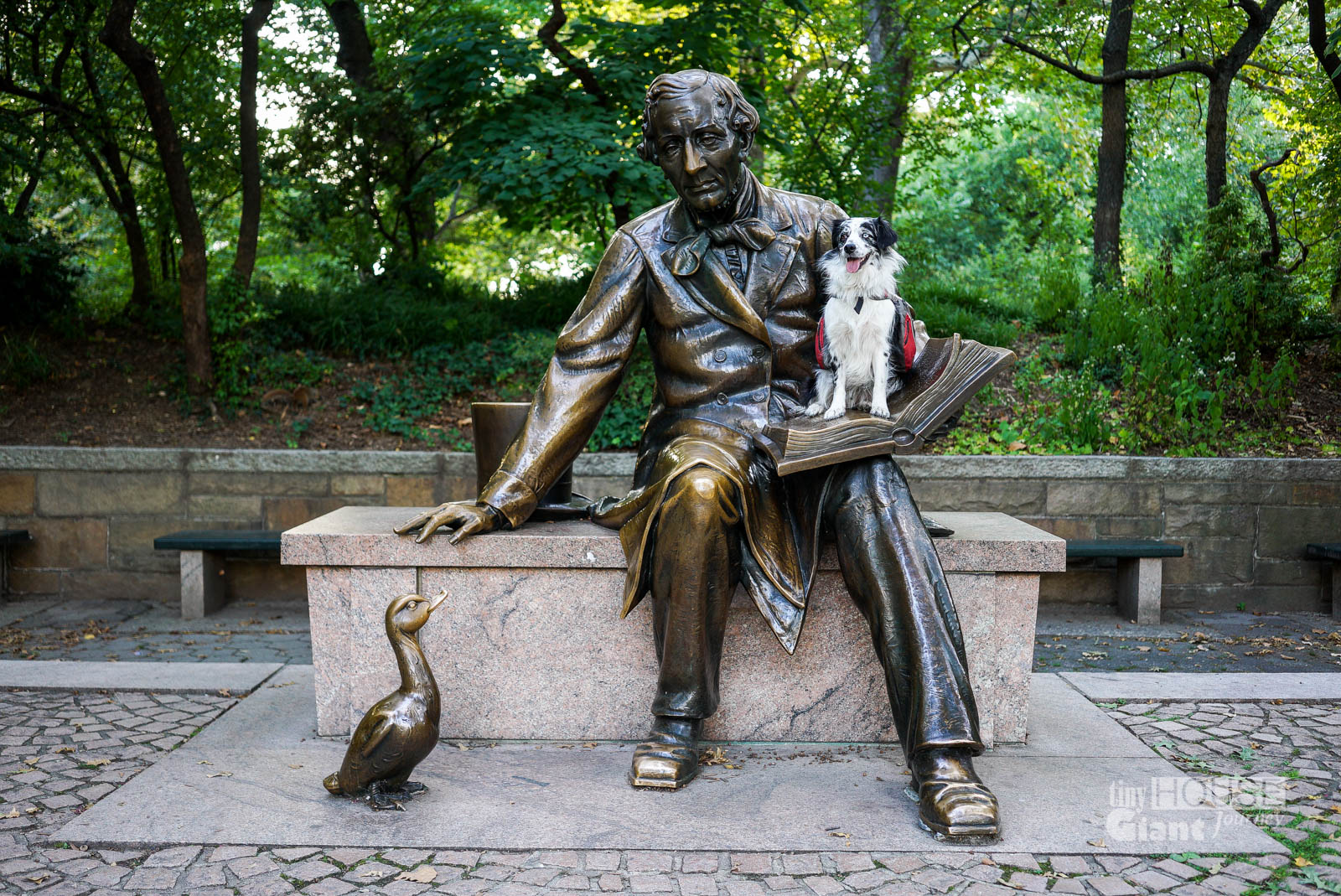 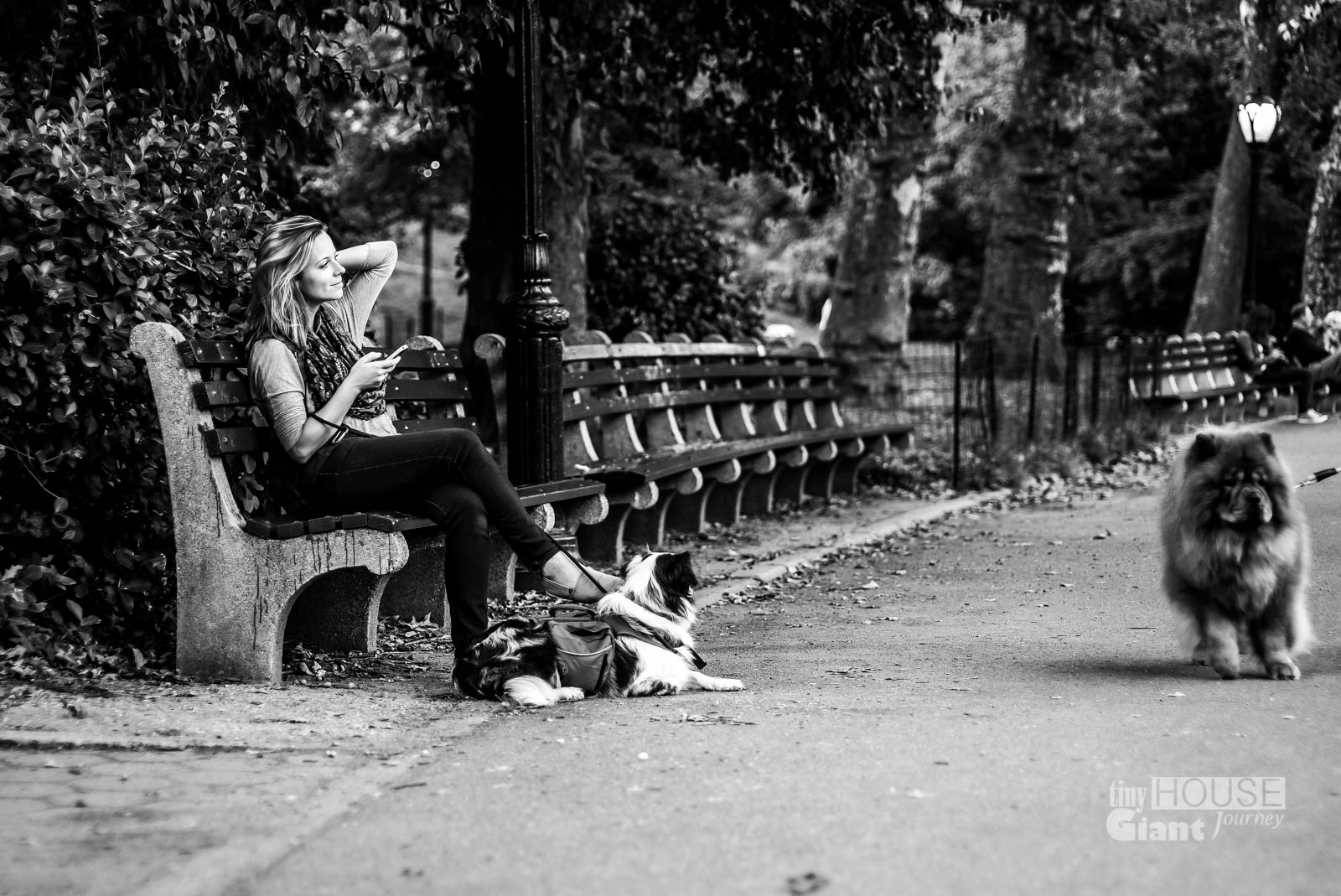 That evening we took a long, slow cruise toward the new World Trade Center. Bright colorful light danced across our tiny roof, as enormous buildings illuminated the sky. It was September 10th.

Guillaume recalled his childhood trip to the WTC over 20 years ago, and admitted how eery it now feels with the vanishment of those twin giants. I never stood underneath the iconic towers, but as we spent the next five days touring the city, I believe I could feel their presence. Like an older sibling that passed before your birth, they still linger on the minds of everyone they left behind. Those buildings, and the thousands that died within their walls, will never be forgotten. 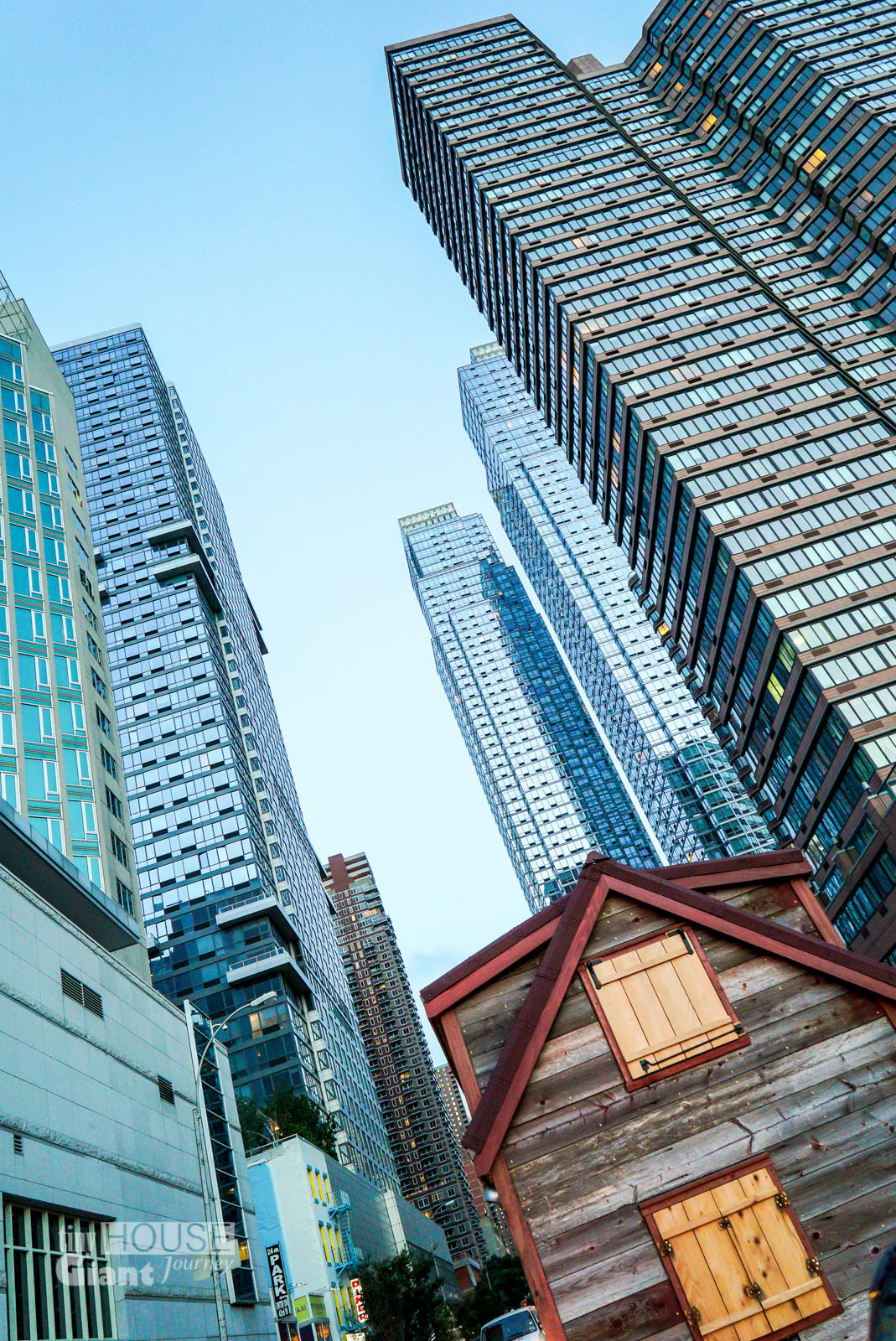 The next day we returned to the city via train and sans house. We chose to plant our home about an hour north in Croton-Point-Park, which offered spectacular views of the Hudson and quiet trails for walking Salies.

Why we decided to walk from Grand Central to the One World Trade Center, I’ll never know. By the time we arrived my feet had blisters and I could walk no farther.

“Only family members are admitted into the memorial today,” someone of authority told us when we arrived. A fair request. Instead I spent the morning licking my wounds and watching as Guillaume photographed the new, alluring skyscraper.

“9/11 was a disaster created because the government wanted a new building!”

“It was designed to fall by the government!”

These are the shouts I heard on September 11th, 2014 while standing outside the memorial. I also witnessed others who came to visit ground zero on this anniversary, retaliating verbally or blatantly ignoring the angry conspiracy theorists.

It was hot and I needed water, so we stepped into a nearby bar around 11am. It was full, not of tourists and drunks, but of firemen, police officers and soldiers in uniform. They were drinking and conversing cheerfully. A ritual I assume on this day.

Later we ate at Minetta Tavern, a restaurant with a reputation for an amazing burger (that also happens to be $30, sheesh). Feeling a bit adventurous we tried the gelatin-like bone marrow, which I thought was edible but Guillaume couldn’t stomach at all. Dinner was overshadowed by our next event – my first theatrical experience in New York. We had tickets to an “immersive” off-broadway show, called: Fuerza Bruta Wayra, or just “Wayra. ”

But immersive isn’t the right descriptor for Wayra. Perhaps involved is better suited, because we were actually physically involved in the performance. We stood for the entire 90 minutes as entertainers flew all round and on top of us, wind blew through our hair, water misted our faces and banging drums vibrated our ribcages. A shallow pool of water lowered overhead, close enough to brush our extended fingertips. Silhouetted swimmers gracefully floated or harshly beat against the pool’s plexi-glass floor. It’s thrilling and even scary at times.

Wayra doesn’t have a storyline, per say, but being a narrative-lover I imagined the entire performance as a dream-like representation of our protagonist’s dull repetitive life, epic death, fight for survival, and eventual surrender to death and acceptance of the afterlife.  It was stunning, to say the least, and a wonderful first experience.

I also made a point to visit the American Museum of Natural History, even though I only had a few hours to explore the detailed exhibits. I could have easily dedicated an entire day to getting lost in South America, Africa, Asian and the Birds of the World displays, but I was famished and it was time to go.

One of my afternoons was spent exploring Hester Street Fair. There I ate from an amazing Indian street food vendor and allowed myself to buy a necklace. I’m not supposed to be buying things! In case you forgot, we live in a very small house. But, sometimes, I give in to temptation and my old spending ways. I’ll purge my meager belongings later to compensate for it.

Of course, Guillaume and I had to walk through Times Square before leaving New York. But honestly, this was not the highlight of our time in New York. As with most tourist attractions, the allure never manages to transfer into reality.

The best thing we ate in New York was a cheap pizza slice at a small shop near Grand Central Station called Previti Pizza. I had the artichoke truffle slice, and it was AWESOME. I still dream of it. 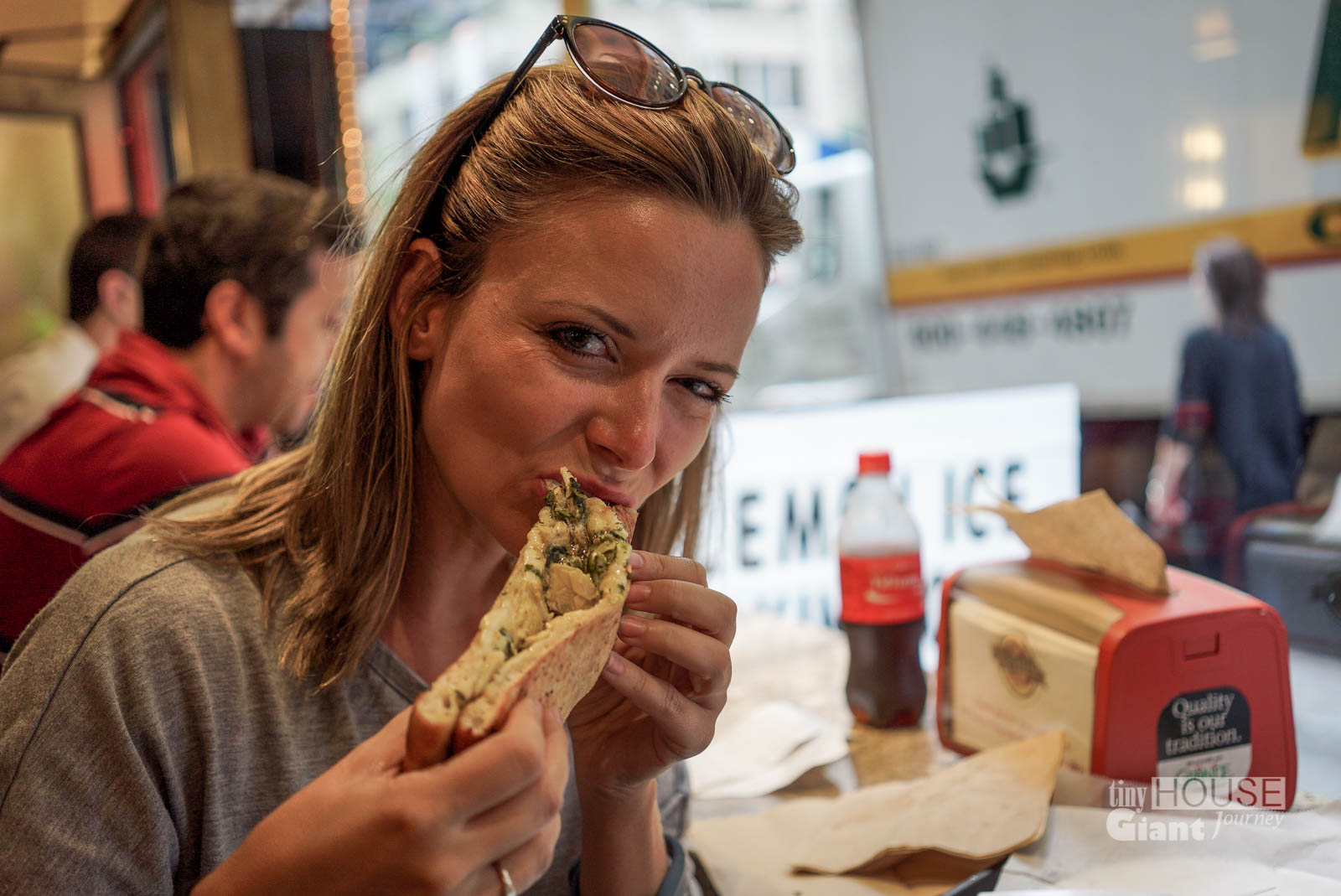 I think I’ll end on that very attractive photograph. New York was a surreal experience and I was glad that my first visit to the famed city serendipitously fell on the anniversary of 9/11. Our tour was one of quiet remembrance and reflection, but Guillaume and I also allowed the city to dazzle us with a few of its many wonderments. In five days, we only scratched the surface. But does anyone really know New York? Every bit of it? Even lifers must be surprised by her secrets on occasion. . .

I’m a little behind on my posts, but soon I’ll write about Montreal, Quebec City, New Brunswick and Nova Scotia. In the meantime, keep checking our Instagram and facebook for updates.

As always, thanks for reading!