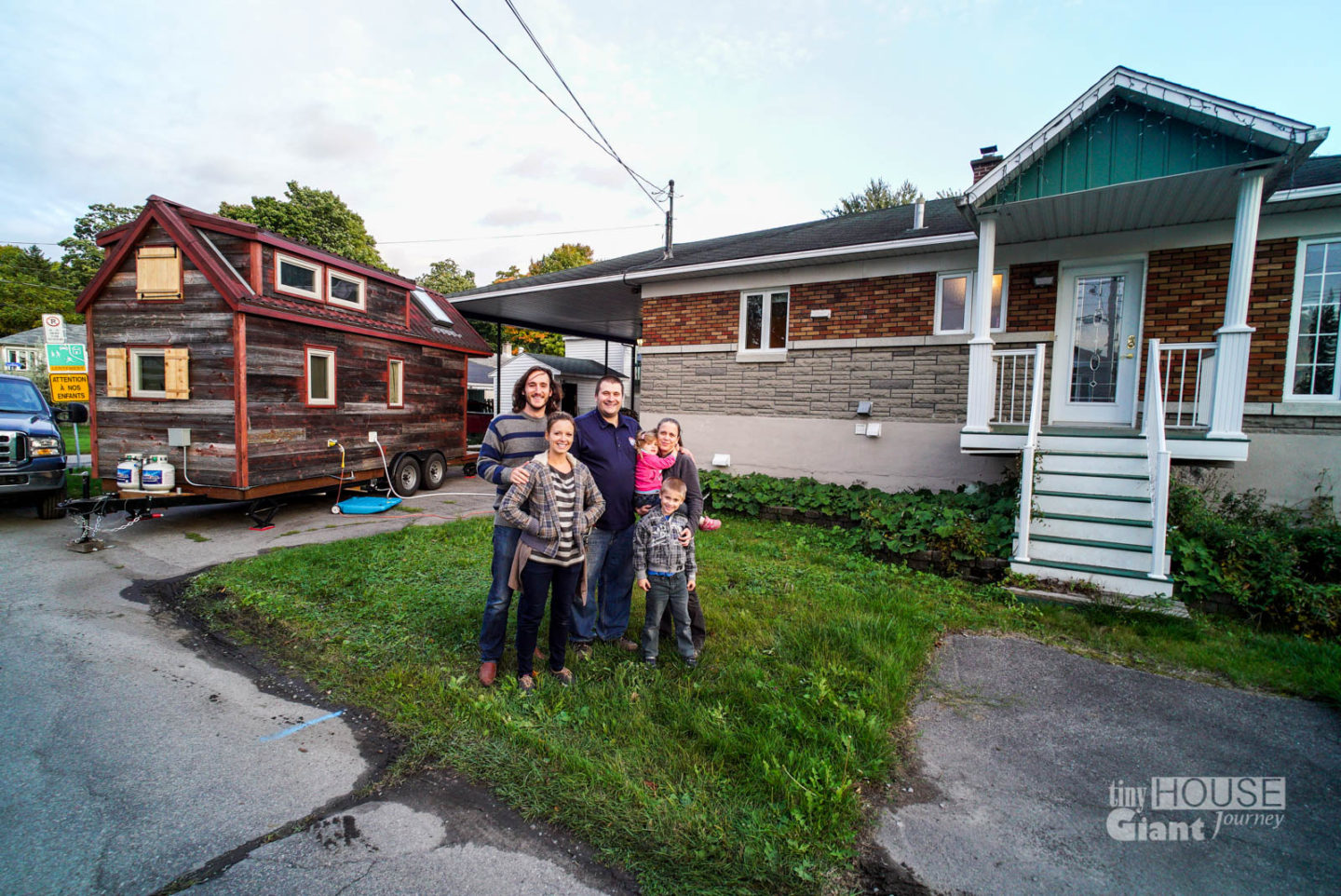 On our first morning in Quebec, we patted our little pup on the head, stuffed pillows into our staircase so that she couldn’t climb into the loft unsupervised, left our campground and headed straight for downtown Montreal.

As we entered the old part of the city without any type of plan, we were greeted with a delicious surprise: a maple syrup tasting. 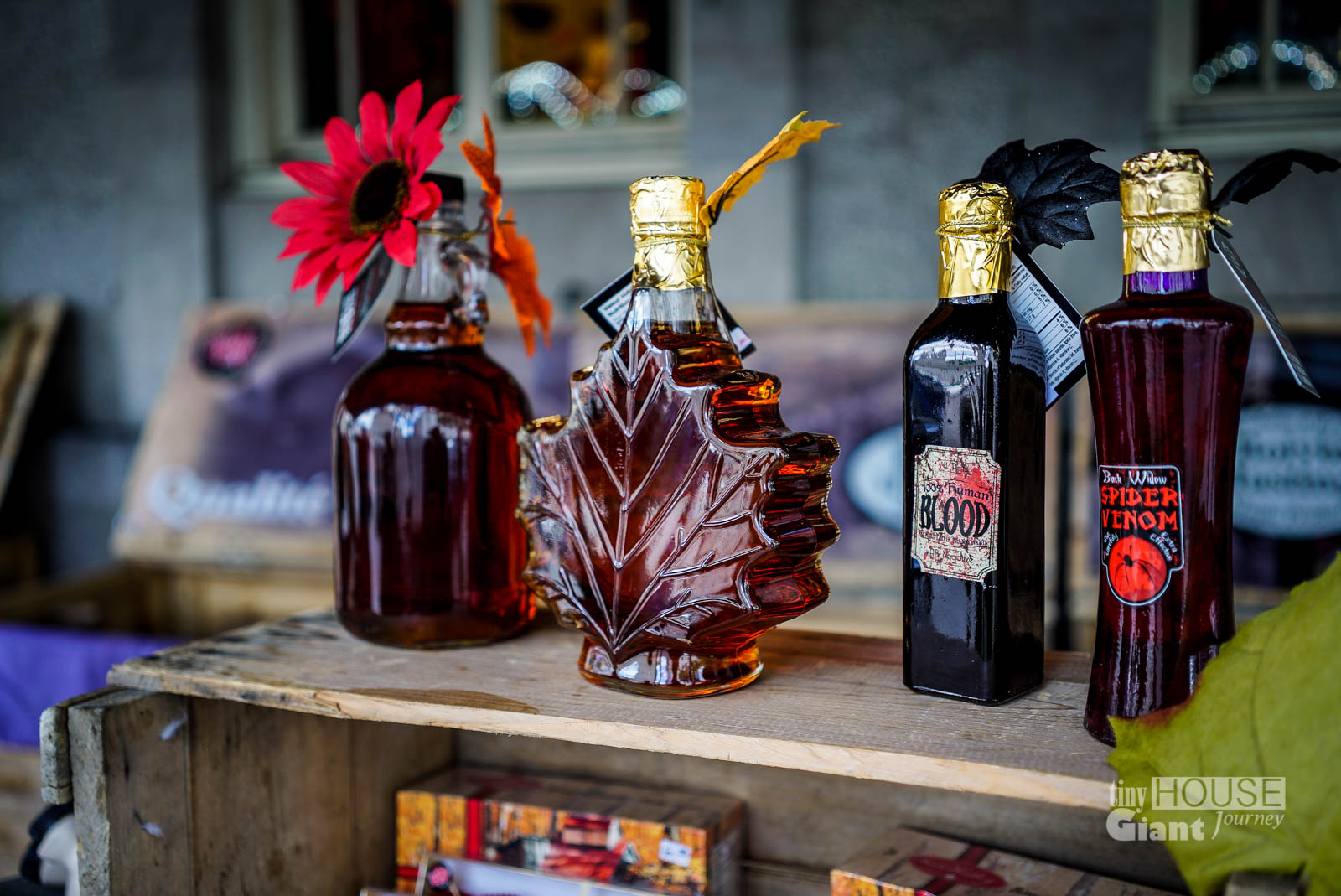 And she did… or, I did. But, alas, I live in a tiny house and only allow myself one gift a day, and that gift has to replace something in my house or evaporate within a few weeks. Guillaume and I bought one leaf-shaped jar of maple syrup, which has now been consumed and no longer exists. 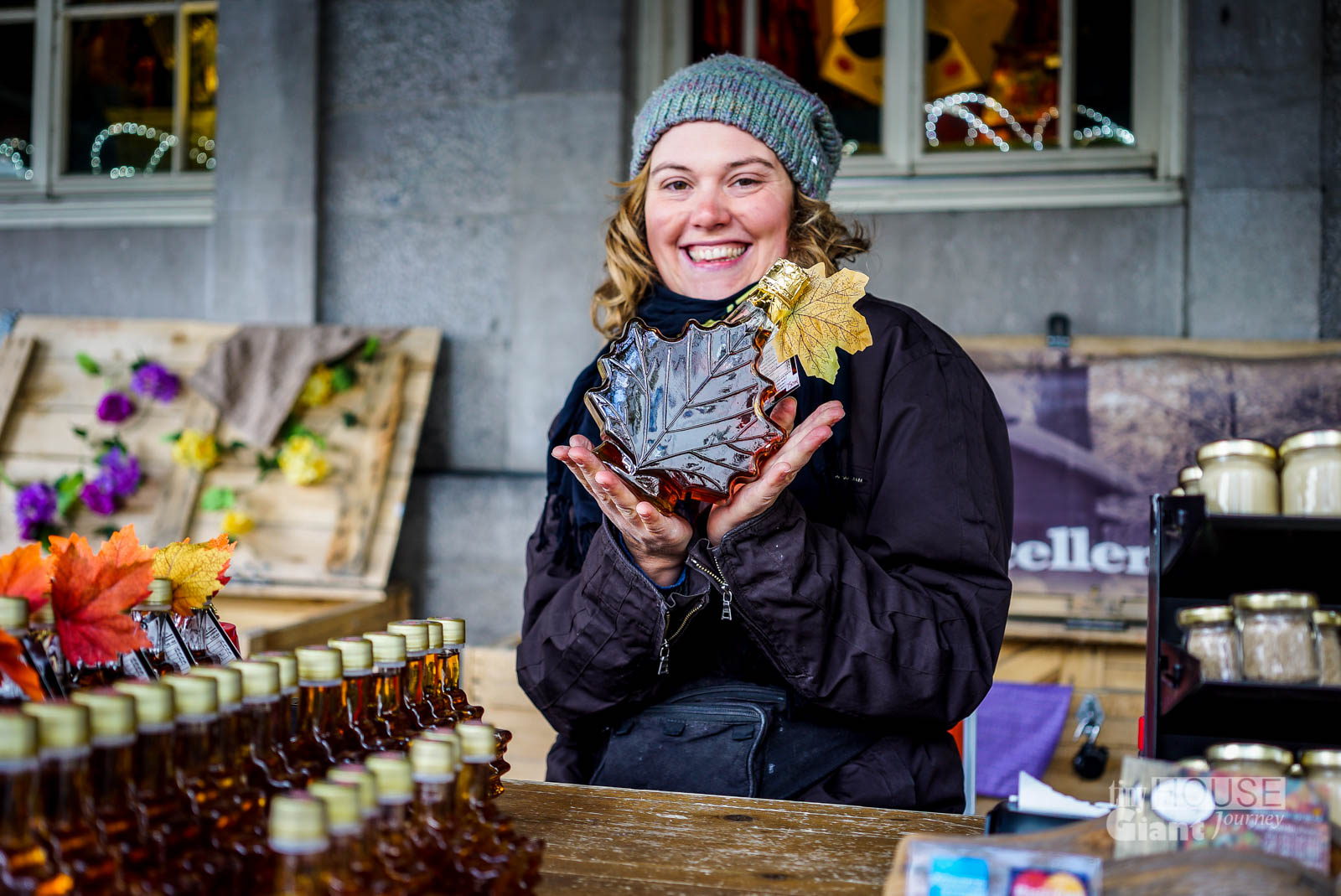 I finally understand why Canadians take their maple syrup so seriously. It’s nature’s organic cocaine. Not that I’ve actually tried cocaine, but maple syrup is what I assume cocaine would taste like, if you could pump cocaine out of a tree and pour a rich amber glob of it on top of pancakes. You’re with me on this, right?

Next Guillaume had a brilliant idea: “We should rent bikes!” 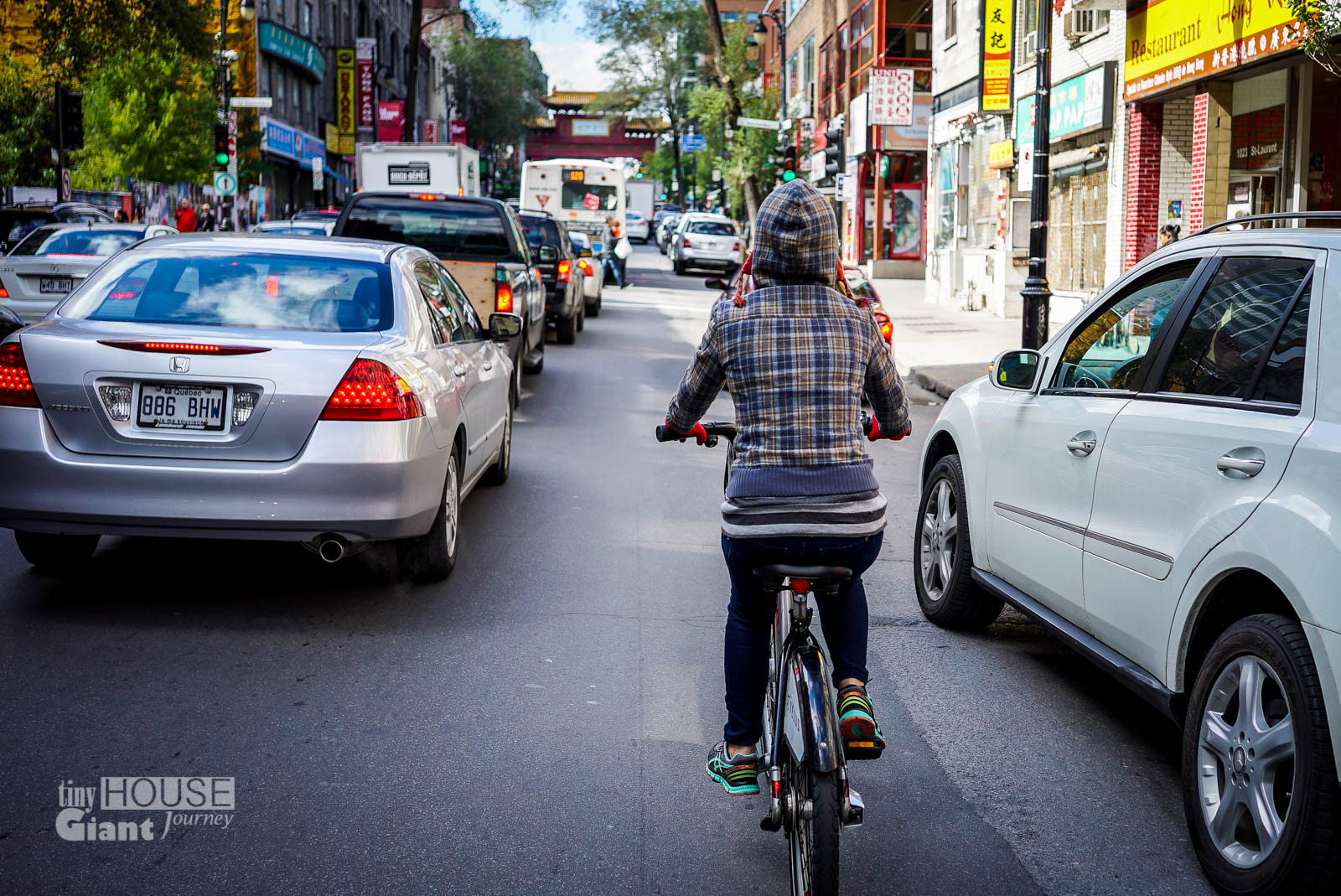 Five minutes later, I was struggling up a gargantuan hill and no longer thought Guillaume’s idea was brilliant. We ditched the bikes and went for a hike in Mount Royal park.

It was an enormous park with plenty of trails and gorgeous orange and red trees everywhere. The top offered delightful panoramic views of Montreal.

Later we returned to Old Montreal for dinner and found an excellent Polish restaurant called Stash Cafe. Guillaume had never tried Polish food before and he absolutely fell in love with it. 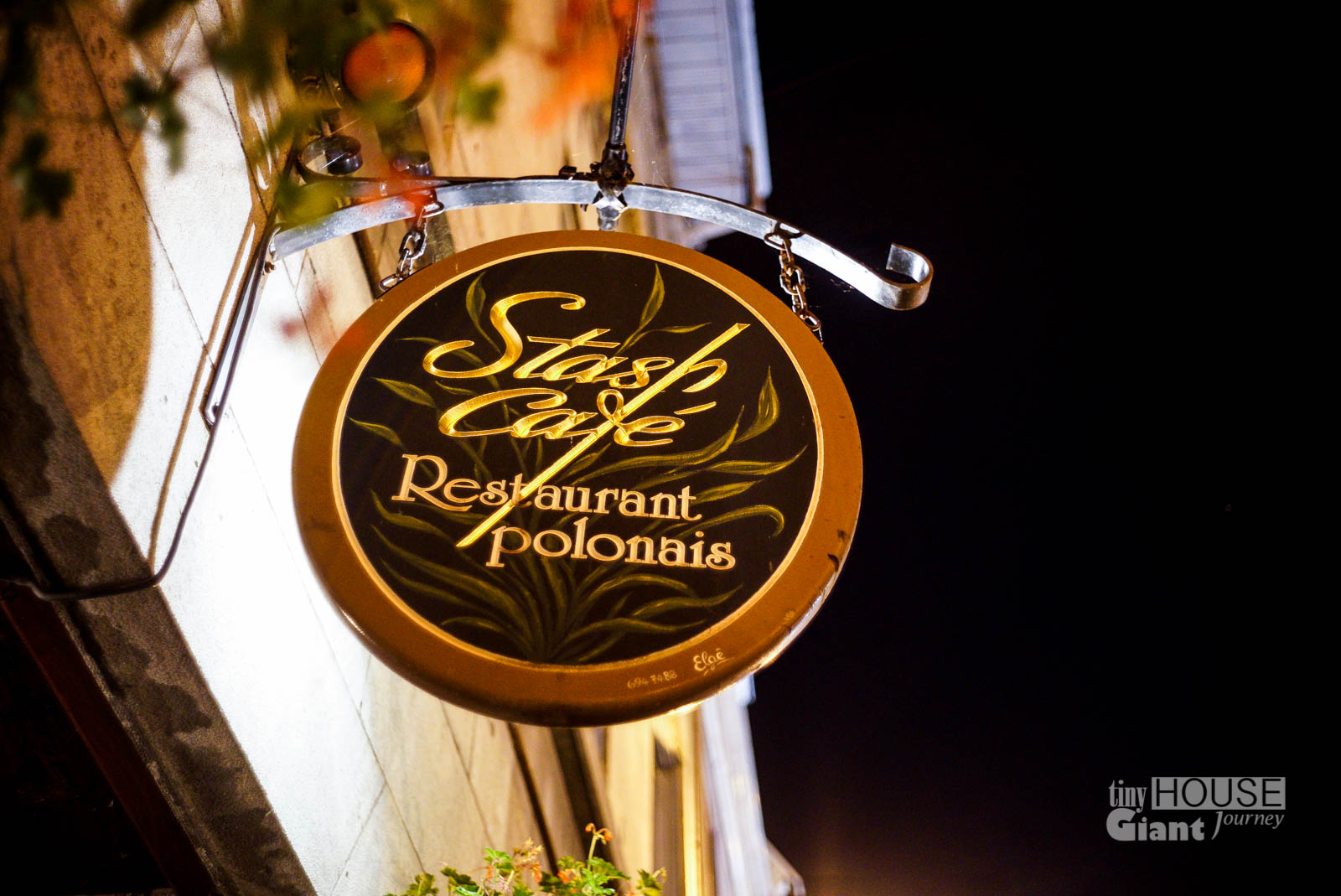 A few days later we moved our house to a driveway in Laval. David had contacted us weeks prior to offer us parking in his driveway, and this was the first time we were able to make it work!

As we boondocked on his property, we got to know David, his wife Chantal and their children. We had two INCREDIBLE dinners with them (fondue and poutine paired with local beer or wine), and Chantal even sent us off with a few lunches worth of homemade soup and bread.

This extraordinary hospitality from strangers was absolutely unimaginable a few months ago. Thank you David and Chantal, I’m so happy we can now call you our friends.

On our last evening in Montreal we went to the botanical gardens. Every year they put on a breathtaking display of handmade paper lanterns in the Chinese garden. It takes an entire year to design and create these beautiful pieces. As I walked the groomed stone pathways, I was guided by hundreds of glowing beacons telling the story of the Chinese explorer, Zheng He.

My cheeks turned pink from the brisk autumn wind as we zig-zagged through the iridescent scene. I read dozens of passages about Zheng He, but I can’t remember much about him now, except that he had a lot of boats and not a lot of balls (he was a eunuch)! Soon I was yearning for a cup of hot cocoa or ginger tea. Note to self: always bring refreshments.

Before leaving the gardens we stopped off at the Insectarium.

A group of art students were drawing their own species of butterfly for an assignment, and Guillaume asked one of them if he could take her photo. She’s obviously very talented.

The next day we left Montreal. David and Chantal told us it was the beginning of Canada’s “Indian Summer,” so we could look forward to one week of warm weather before winter slices through like a sharp knife.

We weren’t ready for winter. In fact, we hadn’t planned to install the wood stove in our tiny house for another month. So we crossed our fingers that they were right, packed up and headed north toward Quebec City.