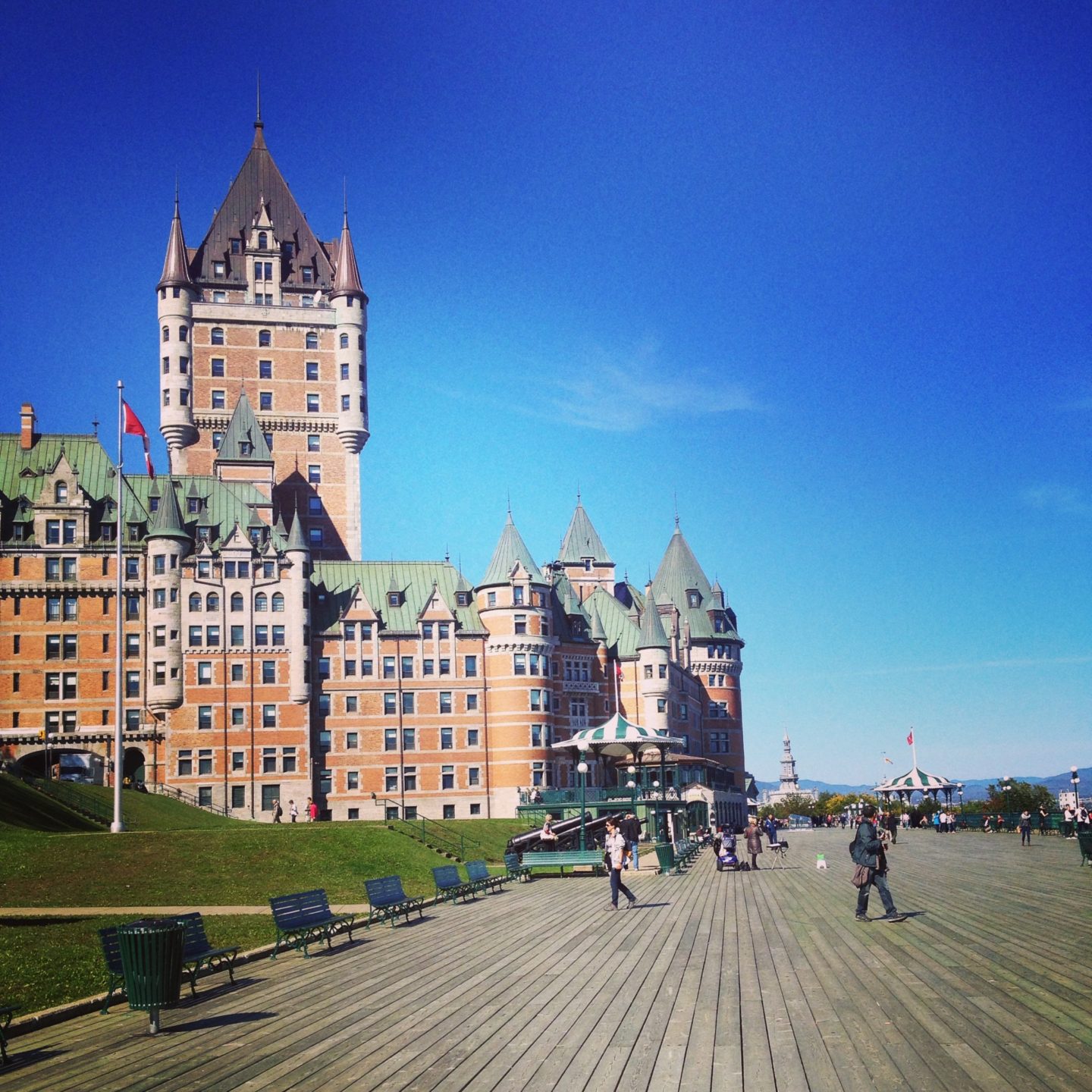 Sometimes all you have is an afternoon to enjoy a city that deserves a weekend. That was the case for us and Quebec City. We parked at a campground just outside of Quebec City, and prepared for an accelerated field trip.

Luckily David and Chantal were correct about the Canadian “Indian Summer,” and we enjoyed a beautiful sunny day, roaming around without expectation and being utterly delighted by our findings.

10am: We parked in the old part of Quebec City, which (as you might have noticed) is our favorite place to start. We did the same in Philadelphia and Montreal.

11am: We decided, without a doubt, that Quebec city is gorgeous. Cobbled walkways spiral up a steep hill lined with 17th century houses, while buskers occupy the streets with local music. Some received my questioning eyebrow, others my approving smile, and one a handful of change.

I suppose I’m a snob or cheap when it comes to street performances, because many of them were very good. I feel guilty about that, especially when I spend money on frivolously things, like a pumpkin spice latte. Old habits die hard.

This is the busker that won my heart:

12pm: We found ourselves wandering along a cliffside deck, under the shadow of a castle hotel (Château Frontenac). 360 degree views allowed Guillaume and I to gaze out over the St. Lawrence River and back at Quebec’s parisian architecture and gleaming silver rooflines.

The entire city seemed to be channeling the spirit of Paris. It was amusing for me to see children running around a fountain of stone naked ladies, taunting each other in french. You would never see something like that in the states.

1pm: A quick lesson at the Citadel educated us on the complicated history of Quebec. Throughout the province we noticed a motto, on statues and license plates, that says : “I Remember,” referring to the high value French Canadians place on their heritage.

As we continued our stroll along the citadel walls, I became more and more flabbergasted that Quebec City even existed in North America. The architecture, the food, the fashion. No, I must have just fallen into a rabbit hole that sucked me under the Atlantic and plopped me somewhere in Europe. But, I hadn’t.

3pm: I love old books, and if I see an old bookstore or library, I have to go inside. Guillaume knows this about me and indulges my obsession. As we trotted along, we stumbled upon the Morrin Center, and it was simply breathtaking. Upon entering the library I was greeted by double-decker bookshelves, which made me giddy as a schoolgirl! I desperately wanted to go upstairs, swing across the shelves on a rolling ladder and sing a song at the top of my lungs with a stupid smile plastered across my face. But, alas, that area was off limits. One day I’ll live my dream.

4pm: Time to say goodbye to “Little Paris,” but not before I share my new favorite French-Canadian expression: “C’est Cute!” A phrase we often heard when locals first spotted our little house or our little dog.