In one week, we traveled hundreds of miles and held five open houses, sleeping in a different parking lot every night and depending on Tim Horton’s for fuel (caffeine and Wifi). Halifax was the last stop on our open house tour, and then we had a week to freely explore Nova Scotia.

On the evening before our open house in Halifax, Guillaume and I settled in for the night at the Kent Supply Store parking lot, when the power went out. Yikes, is this our fault? We panicked. A moment later we laughed at the absurdity of the idea. There’s no way plugging our tiny house (which has eight LED lights) into this huge hardware store could’ve blown the electricity. We exited our house and realized the entire industrial block was dark, including a nearby mall and Walmart. All of the sudden we weren’t in the middle of the city, but instead the middle of a dark cement jungle. It was an odd feeling.

Guillaume pulled out our Dometic generator, and a few minutes later, our eight lights lit up the parking lot. Our tiny house glowed like a small beacon, as confused customers exited the shadowy department stores.

It was the first time we were ever off-grid – and we were in the middle of a city. 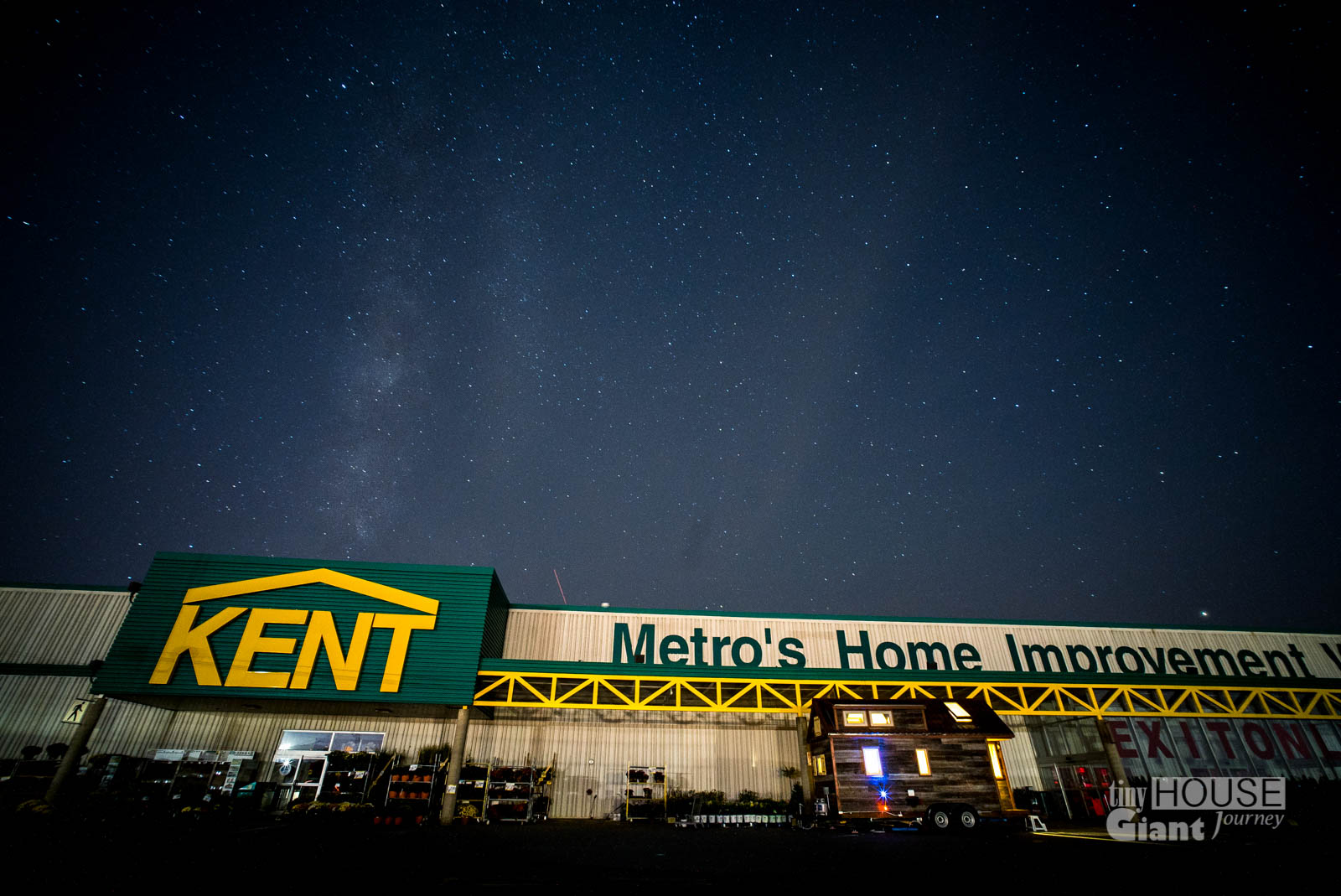 Nova Scotia is shaped like a fish swimming towards Maine. Halifax is in the belly. Cape Breton is the tail,  and Yarmouth is the nose. 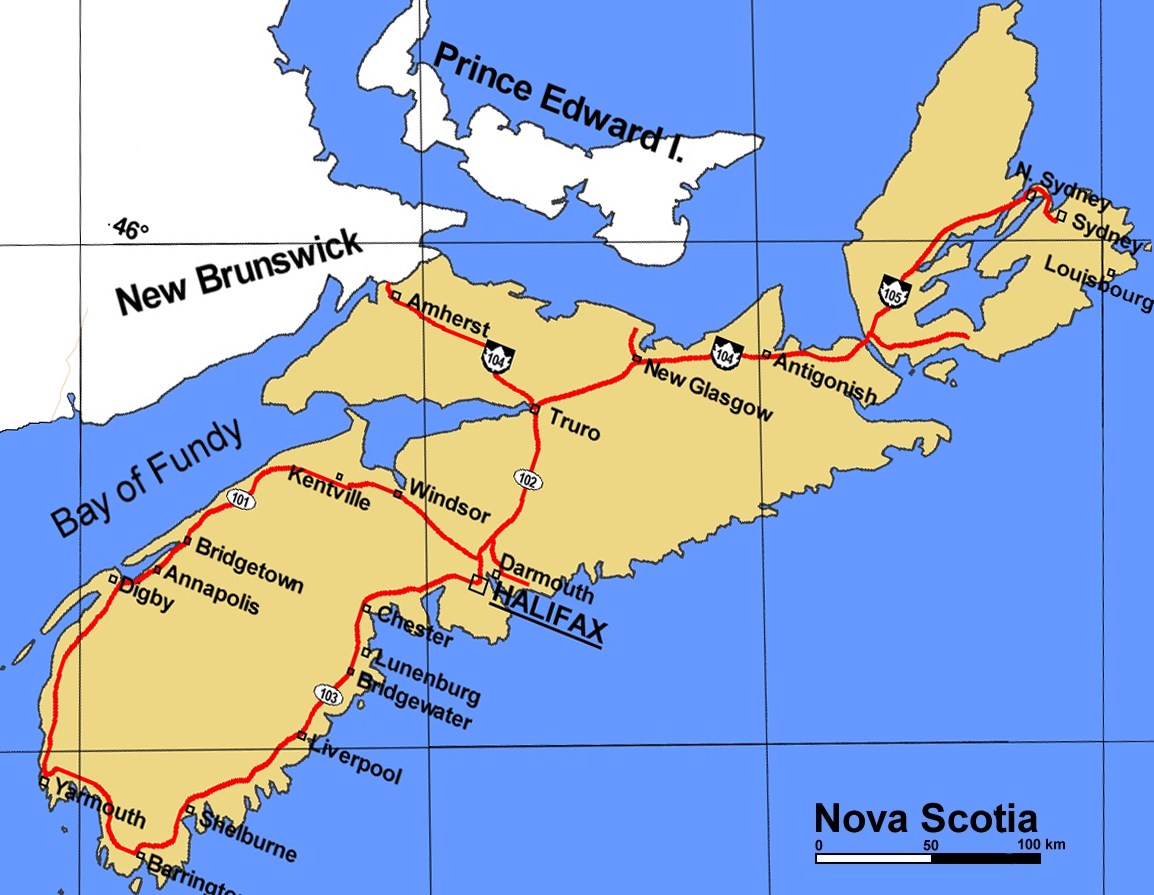 We had one week to explore the lush landscapes of this province before jumping ship – literally. We were catching a ferry in Yarmouth on October 5th that would take us to Portland, Maine. After all, we had promised the border police we would leave Canada within the month.

The Cabot Trail in Cape Breton, we heard, was a drive not to be missed. Guillaume and I were both eager to go hiking in a National Park, so we packed up the tiny house and headed toward the fish’s tail (Cape Breton National Park).

We knew the tiny house couldn’t join us on the winding Cabot Trail, so instead our tiny abode visited numerous picturesque coastal towns along the scenic route to Cape Breton.

In case you weren’t aware, Nova Scotians are SERIOUS about their lobster. I was told by one local fisherman that a major export for their ample shellfish harvest is, actually, Boston Massachusetts. I was also informed that a lot of “Maine lobsters” were actually “Nova Scotian lobsters.” Of course, they’re fished out of the same ocean. I doubt these clawed crustaceans claim a nationality, and I sure don’t discriminate. All lobster varieties are welcome on my dinner plate.

We arrived at the Adventures East RV Park & campground just south of the Cabot Trail. The woman at the the front gate was slack-jawed at the sight of our home, “I’ve worked here for 27 years, and I’ve never seen anything like that! You’re staying for free.”

Wow! Guillaume told her to be careful, we may never leave.

The next morning we unhooked the truck, and the three of us headed out for a full day on the Cabot Trail. The trail is a long loop, and we intended to drive the entire thing and end back at home base that evening.

Unfortunately for us, Mother Nature had other ideas. Fifty percent of our drive was obscured by a cloudy soup. But later on, the sun perked up, and we got a glimpse of this infamous drive.

Pretending to be a Moose

The shore looked as though a giant snail had zig-zagged across the jagged red rocks, leaving a granite slim trail.

At dusk, Guillaume and I went on an unforgettable hike, called the Skyline trail.  I knew we wouldn’t be able to do the whole loop, as the sun was quickly setting. Unlike some of the other trails in the park, dogs were not allowed on the Skyline trail. I was disappointed that we had to leave Salies in the car, but after what happened later, I am so thankful that we did.

The hike began on a wide dirt trail, with tall trees hugging both sides. It was beautiful, secluded and quiet.  I could hear my heart beating. I was a bit nervous, but I didn’t really know why.

Guillaume stopped in his tracks.

“Did you hear that?” He whispered.

All of my muscles clenched tight and in one jerking movement I was posed to dart back to the truck. Then I heard it – sticks breaking, and a low moan. BEAR, was my first thought, and then: CLOSE BEAR. I gulped and took three quick steps in the direction of the truck –

“Don’t run!” Guillaume hissed. “You’re not supposed to run, he might charge.”

He?!? I thought. But I didn’t run. Instead I swallowed the huge lump in my throat and watched in horror as Guillaume crept closer to the brush to investigate. He parted the trees, and his eyes grew huge.

“What is it?” I whimpered. A BEAR? My heart was beating out of my chest. Guillaume waved for me to come closer, and for some reason, I did.

It was a moose. A large male moose only about thirty feet from us. His huge antlers were ripping through branches as he trotted along, moaning and licking the bum of his moose-wife. She was doing her best to ignore his advances, most likely complaining about a headache caused by his irritating branch breaking. A few moments later, their calf came stumbling along after them. She was the only one to acknowledge our presence.

And then, they were gone.

After that, Guillaume and I were practically skipping down the rest of the trail. Feeling like we cheated death, but it didn’t last long. Ten minutes later we passed a Native American hiker and heard the threatening tale of “Ninja Moose” (a title the creature had earned).

“I can’t believe it, he snuck up on me.” The Native American man warned us, visibly shaken by the encounter.

That was the end of my joyous celebration. If Ninja Moose could spook this bad ass Native American hiker, I couldn’t imagine my reaction to a large ominous mammal breathing down my neck. I tensed up and was ready to go. The sun was set by the time Guillaume and I made it back to the truck. But it wasn’t until I shut the truck’s heavy door and hugged my pup, that I could truly relax.

If you ever meet Ninja Moose, send him our regards.