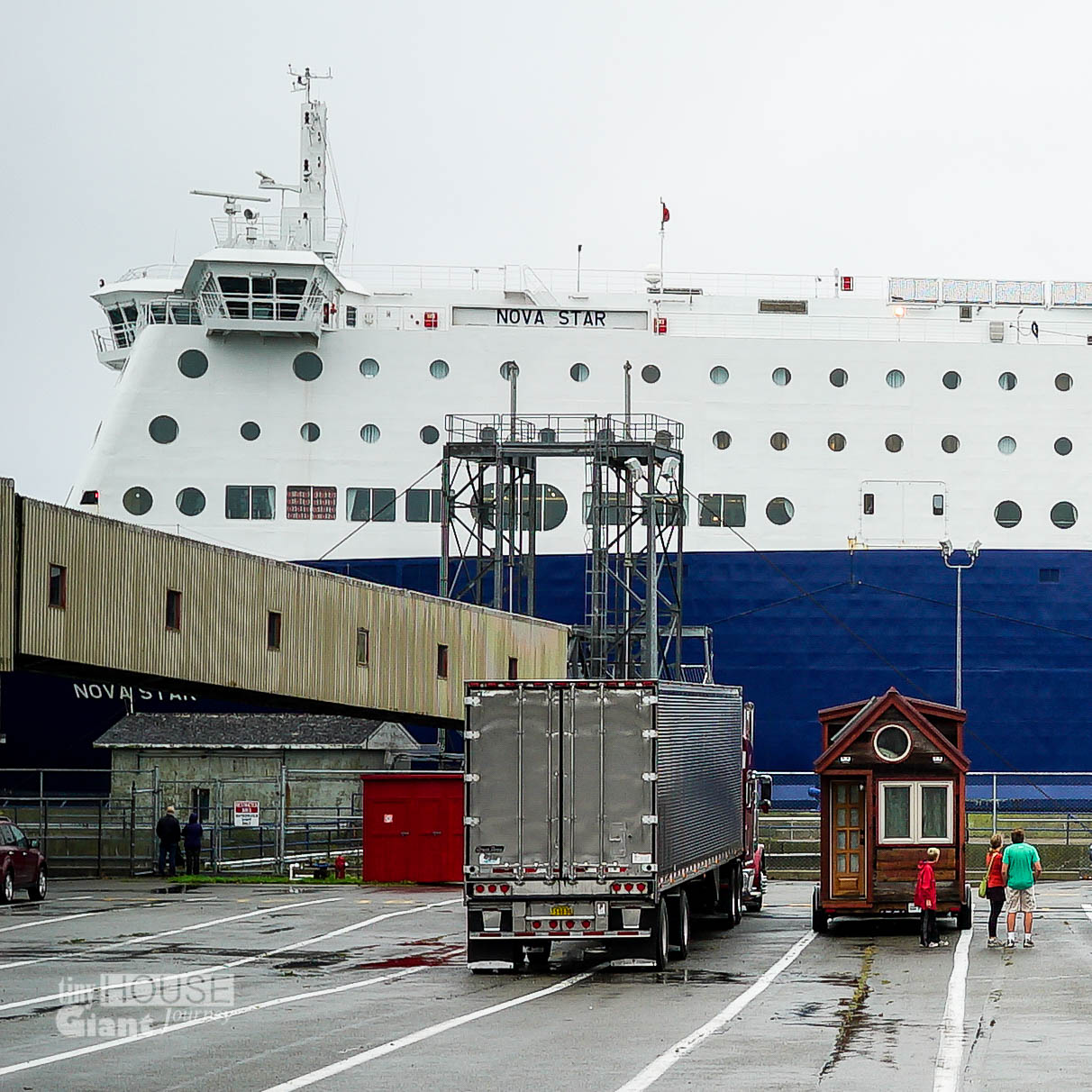 It was time to leave Atlantic Canada. Guillaume and I thoroughly enjoyed our tour, but the date was October 5th and we needed to head south or commit to an icy winter in New England.

How does one leave Nova Scotia with a tiny house? Dragging our heavy turtle shell behind us, the drive up and around the Bay of Fundy would take two full days and cost approximately $500 (gas, insurance, depreciation, maintenance, tires, license and registration, campground, etc…). The other option was to put the house on a boat, which sounded expensive but ended up only costing $425. BINGO, our decision was made!

Before feeding our tiny house as a snack to an iron giant, we filled our own bellies with a classic local dish at a nearby diner – the rappie pie.

Now this might look disgusting (perhaps like something you’ve seen your dog hack up), but I assure you, it was utterly delicious. Imagine a plate of Thanksgiving leftovers that is gelatinous and crisp in just the right areas.

Getting on board the Nova Star ferry from Yarmouth to Maine was humorous to say the least. The dockworkers were entertained by our little house and did everything they could to insure a safe loading. We drove straight into the ship’s underbelly, easy as pie. Three men strapped our house down to the floor using a thick metal rope tautly attached to iron eyes.

It occurred to me that if this ship would sink, our little house would be forever chained in this position. Perhaps a school of fishes would make the tiny house their enormous palace, deep in the Atlantic. A few barnacles would decorate our reclaimed siding and purple seaweed would provide a lush garden. It would be a treasure for some deep sea diver to curiously discover, years and years from now.

I had another thought. A morbid thought. If the ship did sink, all of Guillaume’s and my possessions would be lost. Our house, our clothes, our computers. . . everything. We too, would be lost. Even Salies. I suppose that would make funeral arrangements rather simple for our families, with no burden to box up or give away.

Our tangible presence in the world could be swept away with one salty wave, but we would be leaving a messy virtual world behind – facebook photos, bank accounts, this website.  I am a shallow footprint in the sand. Easily erased. The idea left me feeling satisfied and sad at the same time.

The worst part of the boat ride was that Salies was required to be kenneled on the lower levels of the ship. It was loud and scary down there, and she was all alone. I left her food and water, her bed and a few toys. We were only allowed to visit her once during the long voyage, and she was VERY happy to see us. Poor pup. 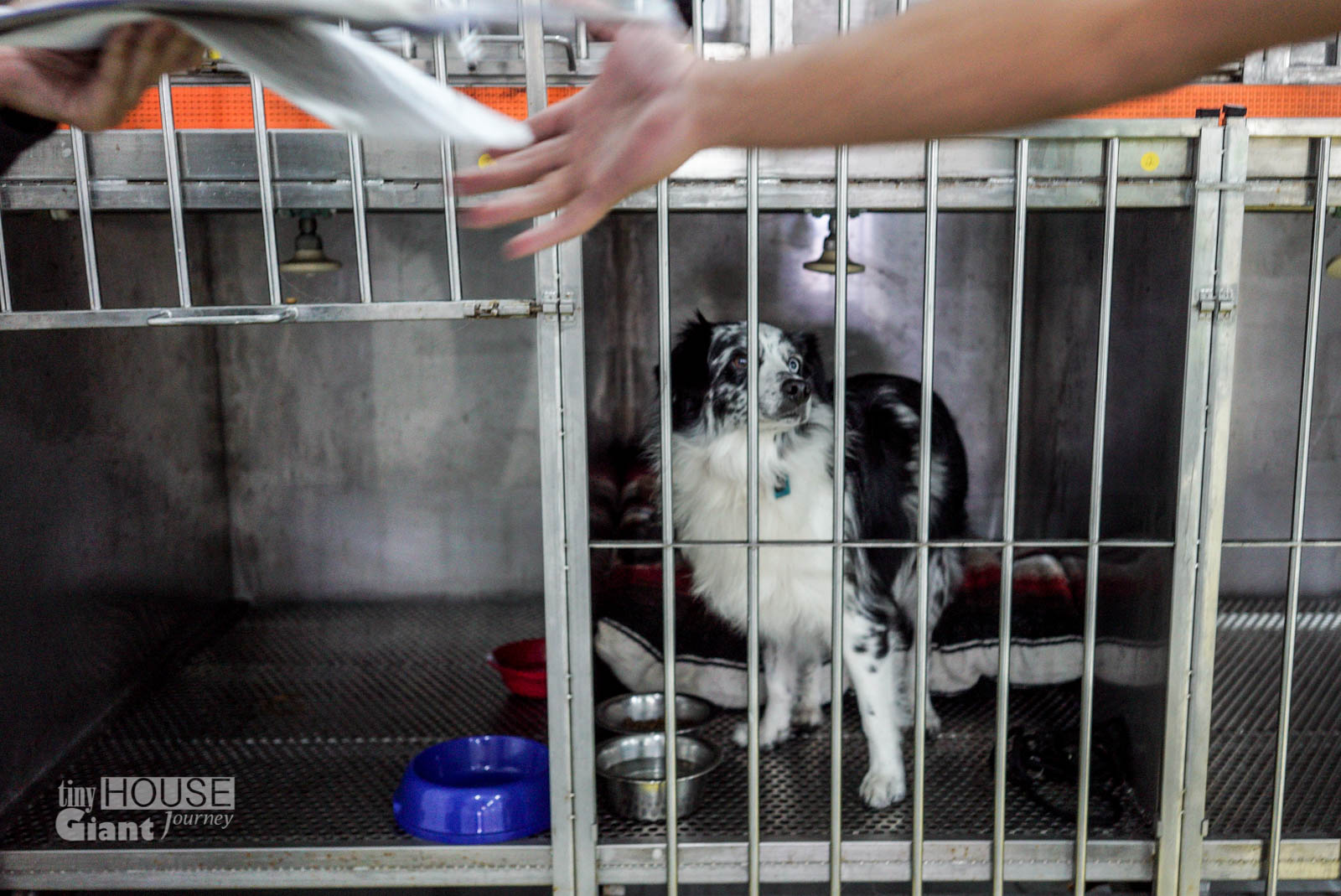 During the 10 hour trip, Guillaume and I scoured the horizon for whales or dolphins. Alas, we never saw one. The shore was just out of sight, so aside from choppy water, there wasn’t much to see until sunset.

Finally our phones alerted us that we were back on American soil, which was oddly relieving. Customs was much easier coming back into our own country. They searched the house, but unlike the Canadian border police, no one bothered to ask if we had any guns. Perhaps they assumed we did and didn’t care.

Next up, finding a lobster dinner in Portland, Maine.