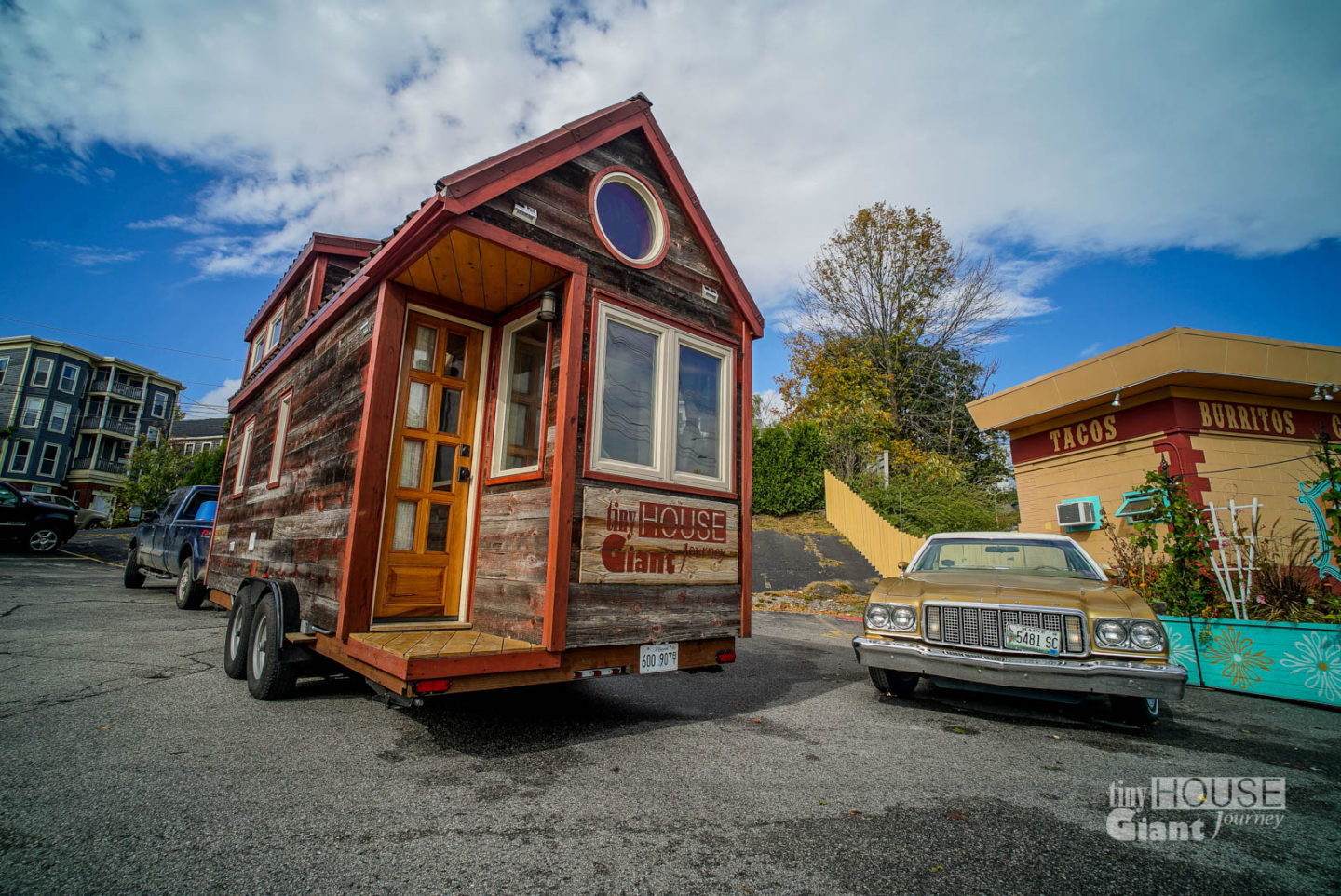 It was my first time in Maine. We stationed the tiny house at the Disneyland of RV parks Bayley’s Camping Resort. The campground attendants actually led us to our campsite with a golf cart. Our spot overlooked a lovely pond with an iridescently lit fountain. They had TWO pools! It was absolutely the largest, most luxurious RV park we’ve stayed in thus far.

But this post isn’t about camping. It’s about food. Excellent New England food to be exact.

Like Quebec City, we only had one day to explore Portland. Guillaume and I wandered around Commercial Street, snapping photos and enjoying this posh little city, until we became famished and transformed into two salivating tourists on a mission: seek out and destroy a crustaceous dinner.

Statue of man ripping a lobster’s claw off. Poor dude.

Lock away your heart in Portland

Every restaurant seemed to boast the “best lobster in town,” so we decided to search the internet for recommendations.

“Duckfat” came up again and again, on almost every forum, as Portland’s favorite restaurant. Duckfat- the name was promising (Guillaume’s favorite food is duck), but it is also probably the ONLY restaurant in the state that does NOT serve lobster. So it was at this point that Guillaume and I were very torn, and very hungry. Do we eat Maine lobster or do we eat at Portland’s #1 restaurant?

We did both! That’s one of the advantages of not being able to buy souvenirs, we spend our money on experiences. And in Portland, that means food. We hopped and skipped over to Duckfat and ordered a basket of Duckfat french fries. Ahem, wait. Let me be a little more clear. We ordered fries that are actually coated with duckfat! Yum. Yum. Yum!

Next we asked our Facebook followers for the lobster dinner recommendation, and a few of them suggested Portland Lobster Co. Portland is a very walkable city, so within 15 minutes we had left our appetizer and arrived at the main event.

Portland Lobster Co. was just our style, located right on the wharf and low key. I ordered at the busy counter and they handed me a lobster shaped buzzer, which vibrated and sparkled 10 minutes later when my order was ready to be picked up. We feasted outdoors under a covered heated tent while wearing cheesy bibs.

An amazing live band supplied the soundtrack for our Tuesday evening supper, as steamed lobster and fried clams filled our bellies. Blissful satisfaction.

Another notable restaurant in the area that we tried was Pine Point Grill. An unexpected, unassuming delicious spot. We also had excellent coffee at Bard Coffee.

We held two open houses in the very short time we were in Portland, Maine. One at Fort Allen Park and another for the students at the Baxter Academy.  I hope we met some of you there. Give us a shout out below if we did!

Can you guess where we went next? I’ll give you a two hints: Freedom and witches…