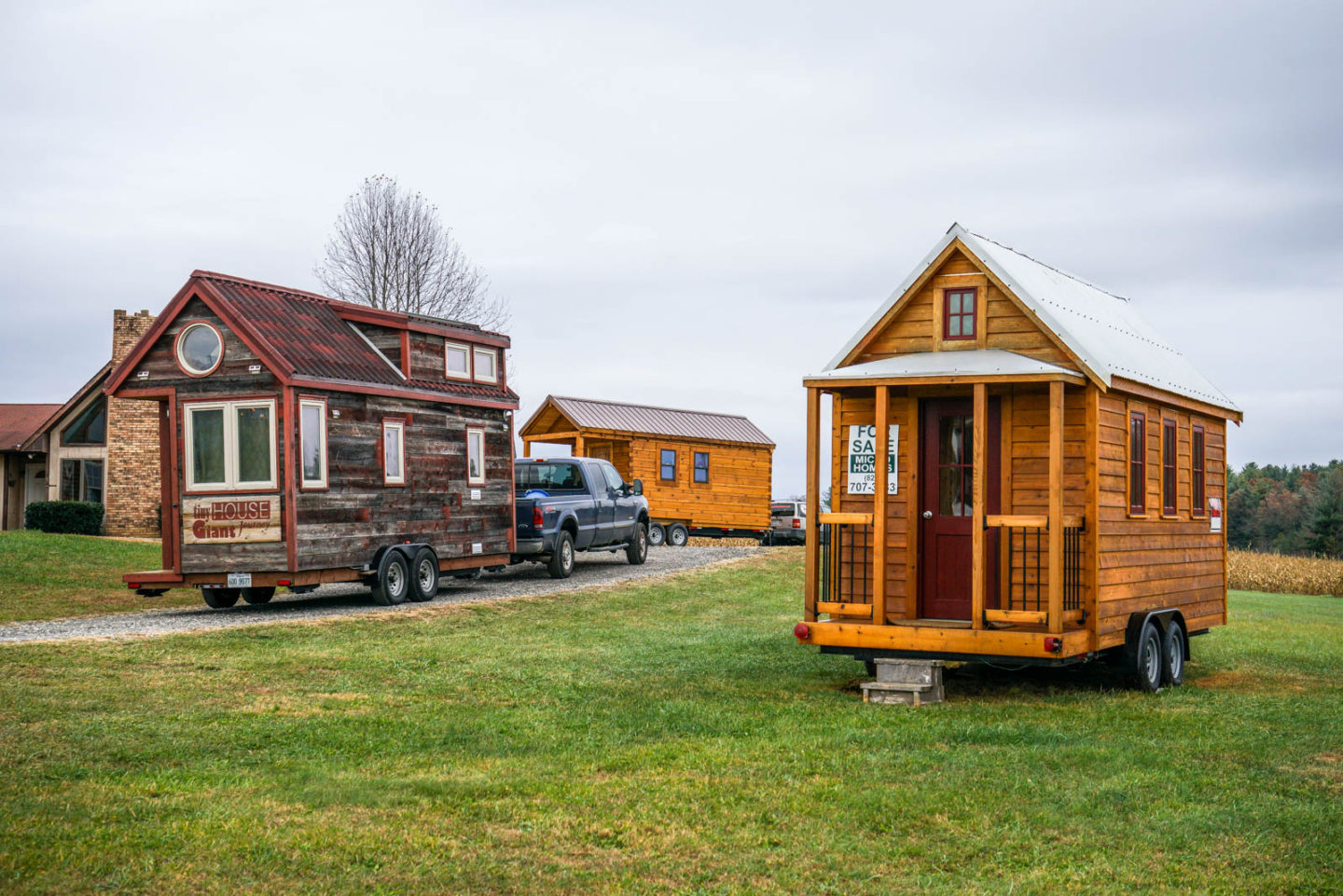 We were rolling down I-26, our way to Asheville, when we happened to see two tiny homes for sale off the interstate. We rubbernecked and pulled over to investigate. No one was present, but the homes were unlocked and there was a “for sale” sign hanging on their porches, so we took a self-guided tour.

The first tiny home is a small Tumbleweed Lusby (now called Elm) owned by George Bischoff. For more information on this tiny home, which is for sale, click here.

Inside the Tumbleweed Lusby

Kitchen of the Lusby Tiny Home

Back bedroom / office of Tumbleweed Lusby

Here’s my improvised video tour inside the Timber frame-style tiny home. I adore the porch and door! What do you think? Later we found out that the roof is actually insulated, so that’s a correction for my comment in the video. For more information you can contact the builder here.

After getting our tiny house fix, Guillaume and I jumped back in the truck and continued on our journey. A little while later we pulled our own tiny cabin into the quiet city of Asheville, nestled near the foot of the Smoky Mountains. A cold morning frost was burning off, while small businesses began to open their doors. Each shop was unique. From an industrial brewery lined with iron sculptures, to a funky laundromat serving excellent food and local beer. From an exotic tea room with service bells and floor cushions, to a no-bullshit coffee bar renovated from an old house. Even the grocery stores were special.

Asheville is a southern town, but it’s also a mountain town. It’s a hipster’s haven, an eclectic’s oasis, and a foodie’s utopia. It’s a town for musicians, carpenters, yogis, painters and hippies. And it’s a town for tiny homes. So these two little turtles carried their communal shell into Asheville, plopped it down, and thought: this kinda feels like home.

We parked our house at two different locations while in Asheville.

1). Wilson’s Riverfront RV Park. Located next to the French Broad River, and fairly close to downtown Asheville. Wilson’s offered a discount for Passport America holders, so were able to get two nights at 50% off.

2). The Wedge Brewery. They allowed us to park in their lot for five days free of charge, so big thank you to Jason Scholder, The Wedge and all of the business owners located on the lot. Because of you, we were able to hold another epic open house.

Salies fell in love with this nearby doggie sculpture around

Teal from Wishbone Tiny Homes agreed to showcase one of his tiny homes at our open house. Not only is Teal passionate about tiny homes and loaded with interesting stories, but he is also a recent dad! We were ecstatic that he was able to take some time out for our open house.

The tiny home that Teal brings to these events is a smaller model, only 16 feet long, but it’s wider than most tiny homes. The width is actually slightly over the street legal limit, which means a permit is required to move the home. Teal assured us that obtaining a permit was no big deal, and he feels the proportionality and openness that the extra width provides is worth it.

Laura LaVoie and her partner, Matt, also came to our open house. I’ve been following Laura’s blog, “Life in 120 square feet,” for a long time. She’s just as clever and cheeky in person as she is in her writing, and this woman knows EVERYTHING about beer! So, of course, we bonded. A few days later, we drove out to Laura and Matt’s mountain property to tour their off-grid 120 square foot home.

On one chilly morning it dropped to about 15 degrees and mother nature wrapped The Wedge in a white blanket. But these weren’t just any snow flakes, they were Tiny House Giant Journey’s FIRST snowflakes! Guillaume hustled out to photograph the scene, while I curled up in bed, clutching to the heat radiating from our wood stove.

Tiny House GJ had another first in Asheville – a house guest! Guillaume’s brother, Justin, flew in from France. A week later we would be celebrating Thanksgiving in the Smoky Mountains with the rest of our family, but Justin wanted to experience traveling with the tiny house, so he flew in early.

Guillaume was out of town for another tiny house workshop, so it was my job to explain the inner-workings of the tiny house to Justin, including the dreaded “how to use the compost toilet” talk.

“You’ll have to sit down when you pee….

….and, here’s the chamber for, um.. solids… so when you need to… um… do that… you pull this lever to open the chamber…

….after you’re finished, turn this crank….

Justin slept on the “spare bed,” which involves putting our bench and two ottomans in the L-shape formation. Justin is about 6’1″ and he could stretch out, but just barely. We don’t have a spare blanket, so Justin used one of our sleeping bags. It might sound crude, but we no longer have excess anything. Even an extra blanket seems like a redundant exorbitance. Anyway, Justin told me he was comfortable. But, perhaps he was just being polite. More tests are needed.

It was Saturday night and Justin was trying to kill his jet lag, so we impulsively decided to crash a party out in the boonies where his friend, knew a friend, who was playing in a band. As we navigated the dark winding roads of rural North Carolina, I thought: where on earth are we going? Twenty minutes later my GPS announced our arrival, and perched up on the hill we could make out a spooky, eerily quiet house.

After failing to drive up the steep dirt driveway (sources later would speculate that it was because I didn’t use 4-wheel drive), Justin and I hiked up. Rings of glow-in-the-dark necklaces illuminated the path, and a pack of friendly dogs publicized our arrival.

This is weird. I thought. Maybe we shouldn’t be here. But, we marched on.

Finally we reached the house. The dark lodge that seemed deserted from street level, was now quite obviously harboring a lively party. Once inside we met Ryan (the friend-of-a-friend) and his buddies. They offered us homemade wine and told us to help ourselves to the spectacular feast on the table.

As I munched on a bit of roast lamb, a monotone voice asked me: “Are you enjoying Kirby?”

“Kirby? Is that… the lamb’s name?” I replied, confused.

“Of course. I raised him and butchered him this morning.” He said pointedly. “He was a good lamb.”

“Oh…” I said, losing my appetite. “Don’t worry,” he consoled me with the same dryness, “Kirby had a wonderful life… and remember, broccoli has feelings too.” And, just like that, he was gone.

Strange. Interesting. Confusing. These adjectives were thick on my tongue that night in rural North Carolina.

Ten minutes later we were listening to Ryan’s band in the yard. I clutched my puffy coat tightly, exhaled frost with every breathe and danced to keep warm. The music was euphoric and unlike anything I’ve heard before. A strange and wonderful blend of cultures and improvisation. This performance marked our first live music experience in the south, but not our last.

A few days later we met Ryan out at his property for a hike, but along the way we stopped in Marshall, North Carolina to see yet another tiny home in the Asheville area! This one is still in the beginnings of construction, but the builder is strictly using all reclaimed materials and is trying to do something many of us in the tiny house community have discussed, but no one has accomplished, yet. What am I talking about?? Slideouts.

This home, made entirely of wood, is being designed to have a collapsable roof and slideouts. What is your thought on this concept? Should tiny homes have slideouts?

A few hours later, Ryan convinced us to go for a swim in his creek. Remember how I said it snowed a few days before in Asheville? Well, the water reflected that. As I slowly lowered myself into the icy water I felt as though my chest was contracting and my body grew stiff.

I exploded out of the water as quick as my rigor mortis limbs would allow. A soothing warmth prickled my entire body. I felt alive, or at least happy to be out of the water. It was invigorating, but you couldn’t pay me a hundred dollars to go back into that freezing creek.

From left to right: Jenna, Justin, Ryan and Guillaume

I could go on, and on, about all the things we did in Asheville, but I think the most important highlight for ya’ll is that Guillaume got a haircut. He says that it’s less maintenance, which I suspect is just an excuse for him not to shower as often. At least we’re saving on biodegradable shampoo. I like it, but I sometimes miss my French-fabio. 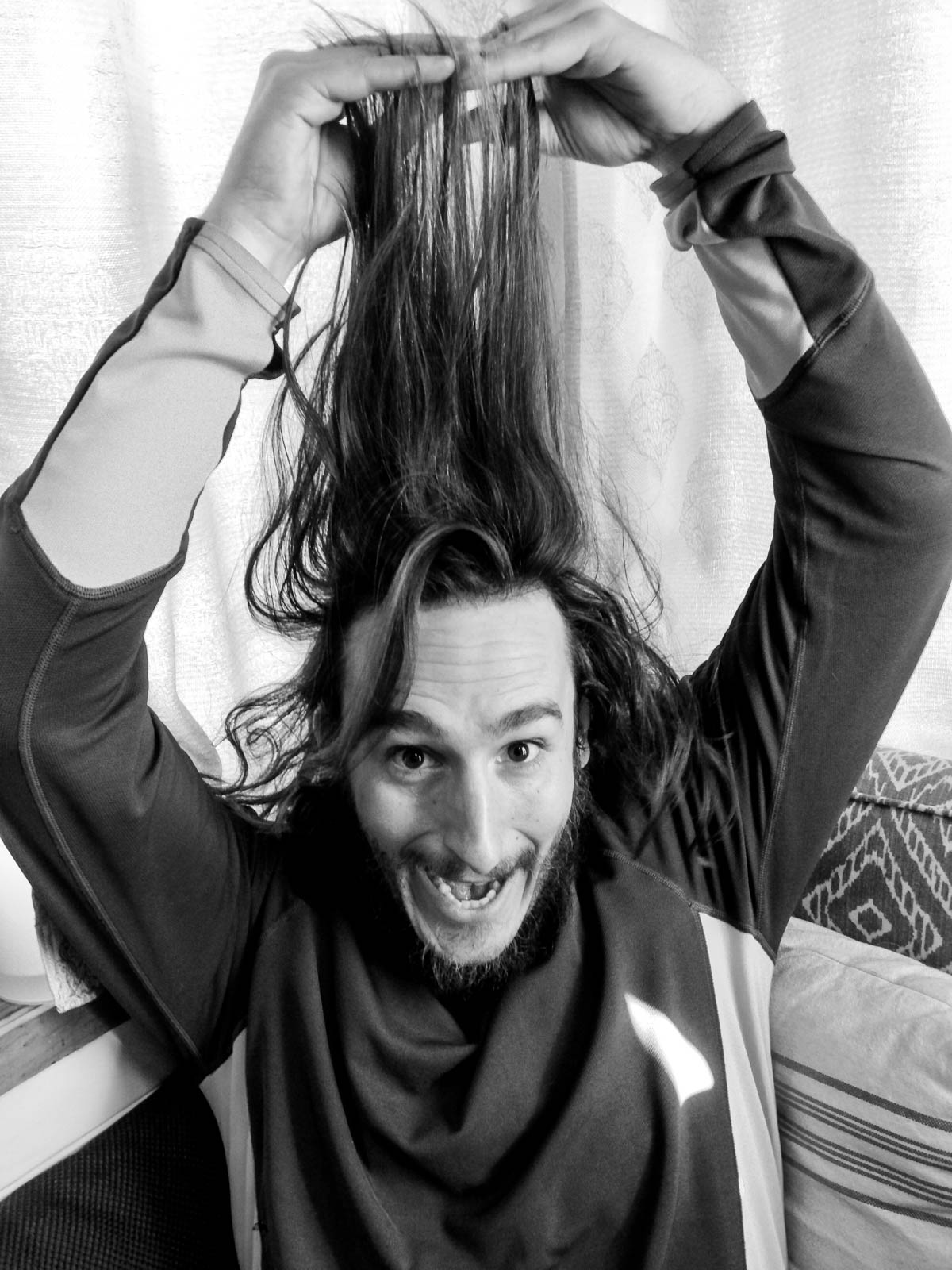 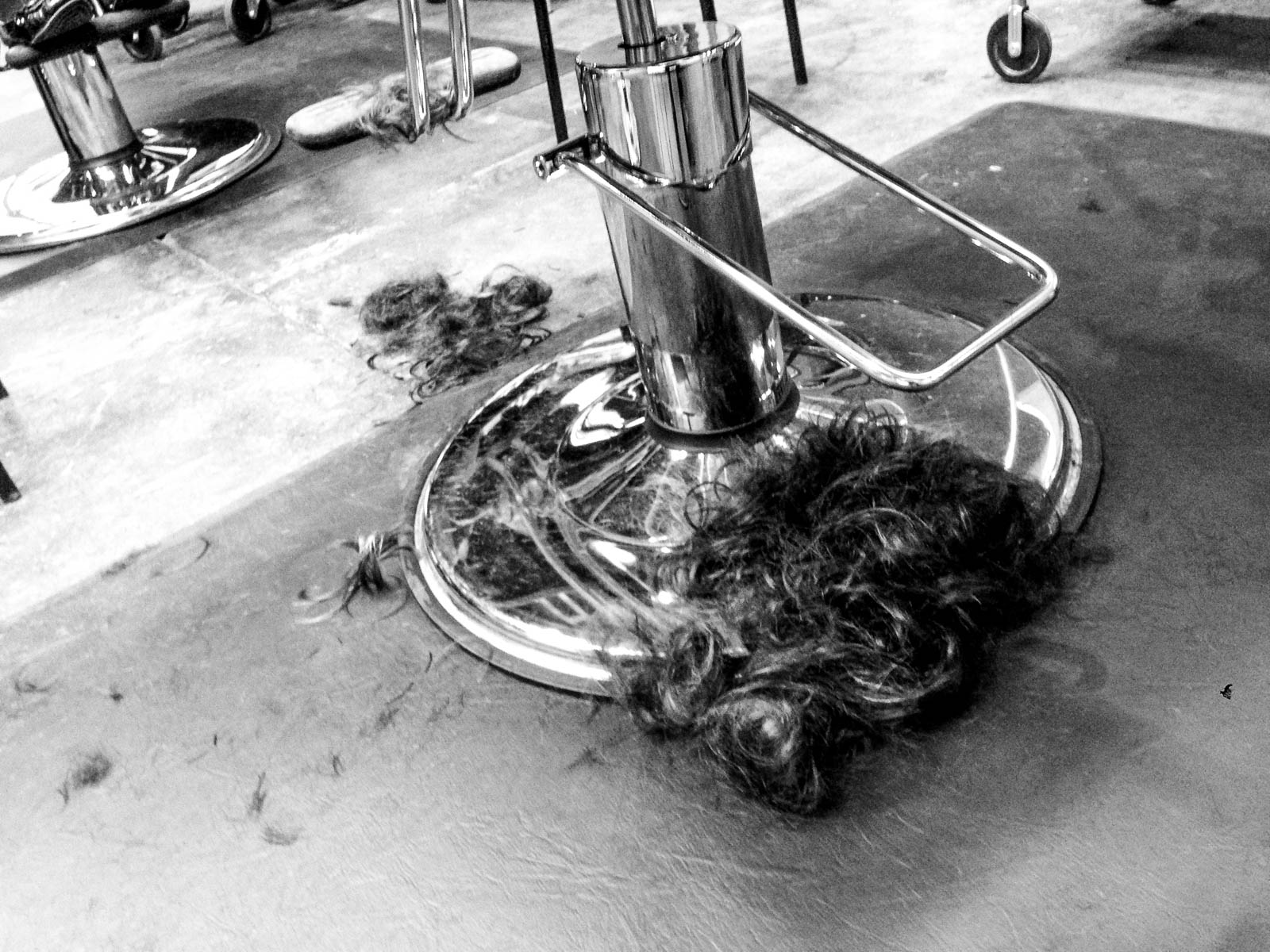 What do you think? Should he keep it short or grow it back out? 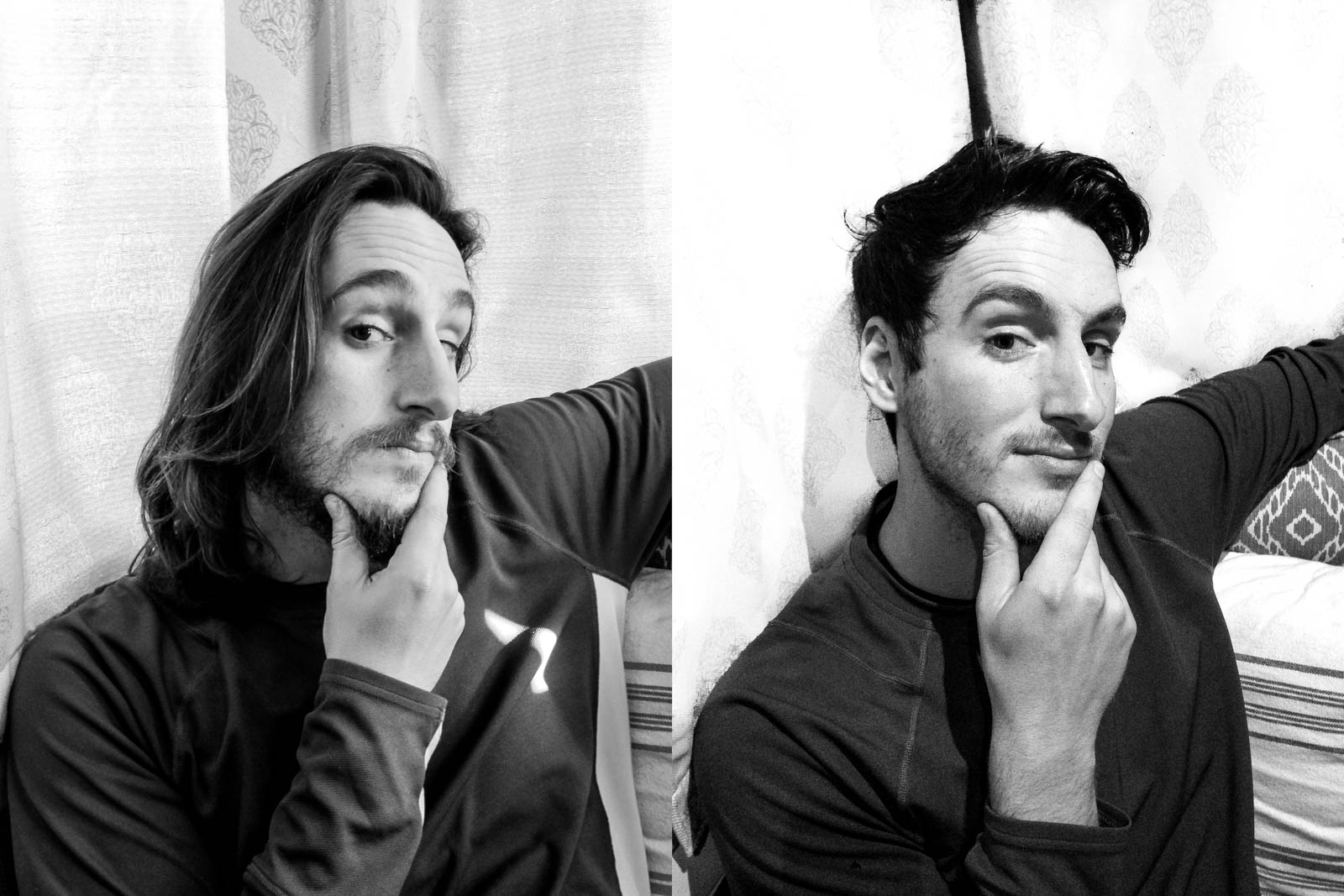 Up Next: We travel to a place drowning in moonshine and forever covered in a smoky haze.