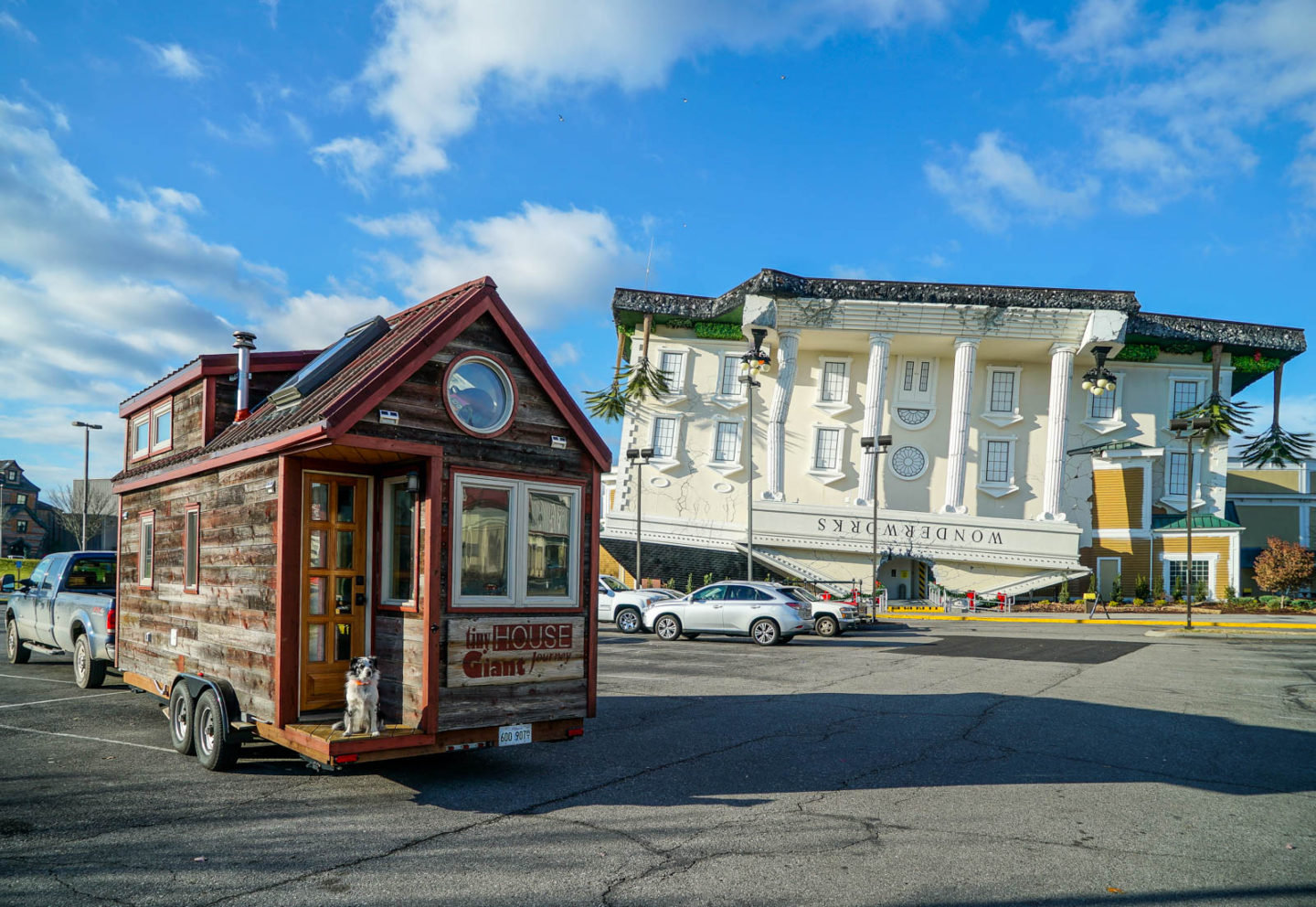 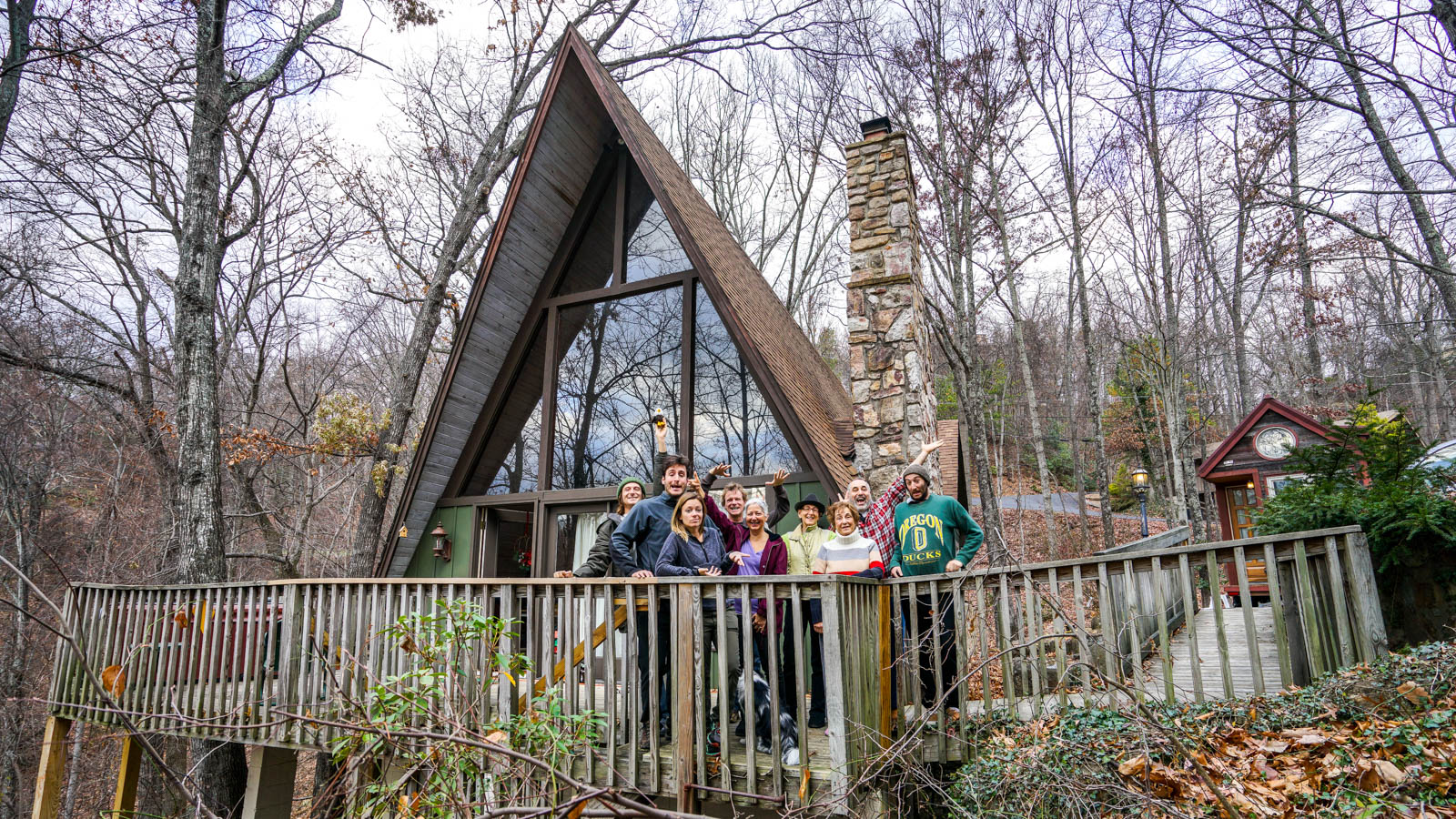 For our family Thanksgiving, we some how convinced both sides to meet us in Gatlinburg, Tennessee. There we rented a three bedroom A-frame cabin. It wasn’t very tiny, but it accommodated my parents and brother, as well as Guillaume’s mother, uncle, grandmother and brother. Guillaume and I preferred sleeping in our tiny house, parked in front of the cabin.

Getting the tiny house up the mountain was a challenge. In fact, it was hands down the most stupid decision we’ve made yet! That says a lot, because we’ve done some stupid things: like off roading in the Mojave desert and driving through downtown Manhattan. If you’ve ever been to the Smokies, you know that the roads are steep and narrow, with sharp blind turns, wedged between a towering mountain and a fearsome cliff.

“We’re never leaving here,” I announced, when we were finally able to level the house. “We’ll never make it down that mountain.” This thought was constantly on my mind during our week long vacation.

We spent the next five days enjoying family game nights, hot tubing, feasting, hiking and general lallygagging. It snowed again, to the delight of our California relatives.

Guillaume and Justin hiked the Little River Trail (13 miles). This trail hugs a beautiful riverbed but doesn’t offer much of a challenge due to the lack of incline. I hiked the Laurel Falls Trail (2-3 miles) with my family. The trail had a moderate incline on a paved walkway leading to a cascading waterfall. You can climb the waterfall, so of course my brother and I did just that. We went a little further up the trail and it proved to be more challenging.

On another day, Guillaume, Justin and I hiked a small (almost minute) portion of the Appalachian trail and the Mountains to sea trail. In fact, this particular portion was the highest point of both of these trails and of the Smoky Mountains, so it offered sweeping views of the park.

The Land of Weird, and the Home of the Wacky

We watched the sunset at the “Top of Ole’ Smokey” at Clingman’s dome, enjoyed a moonshine tasting, sat through a dinner show at the Dolly Parton’s Dixie Stamp-weird (I’m thinking the Lumberjack Feud would’ve been more up our alley) and witnessed a rocking chair concert.

This part of the world cannot be replicated anywhere else. It is nauseatingly touristy, kitschy, but also in the middle of a beautiful national park and surrounded by Native American and colonial history. There are fifty different vacations to be had in this area, but if I had to choose, I would spend the majority of the time in nature.

Blue Grass at the Dixie Stampede

Below, please enjoy the masterful cinematography work by Justin (Guillaume’s brother) in a cultural series of 15 second films. Experience this unique mountain land through the eyes of a frenchman. After all, French Cinema is the best.

The south chronicles _ 8 / The rockin' chair show in Garlinburg, TN

She’ll be Coming Around the Mountain.. Hopefully

I hope I am not disappointing anyone here when I say: WE MADE IT BACK DOWN THE MOUNTAIN! It actually proved to be easier going down the mountain, than going up. Guillaume used the engine break in our diesel Ford 250, a truck that has thus far impressed us with it’s handling and towing capabilities. We took it slow, watched our mirrors and honked a warning to oncoming traffic when we came to a sharp turn. I exhaled deeply when we finally made it to the bottom of the mountain – 1.5 miles later. Next year, I think we’ll leave the house on level ground.

Next up: Honky Tonks, Johnny Cash, and a famous tiny house tour.