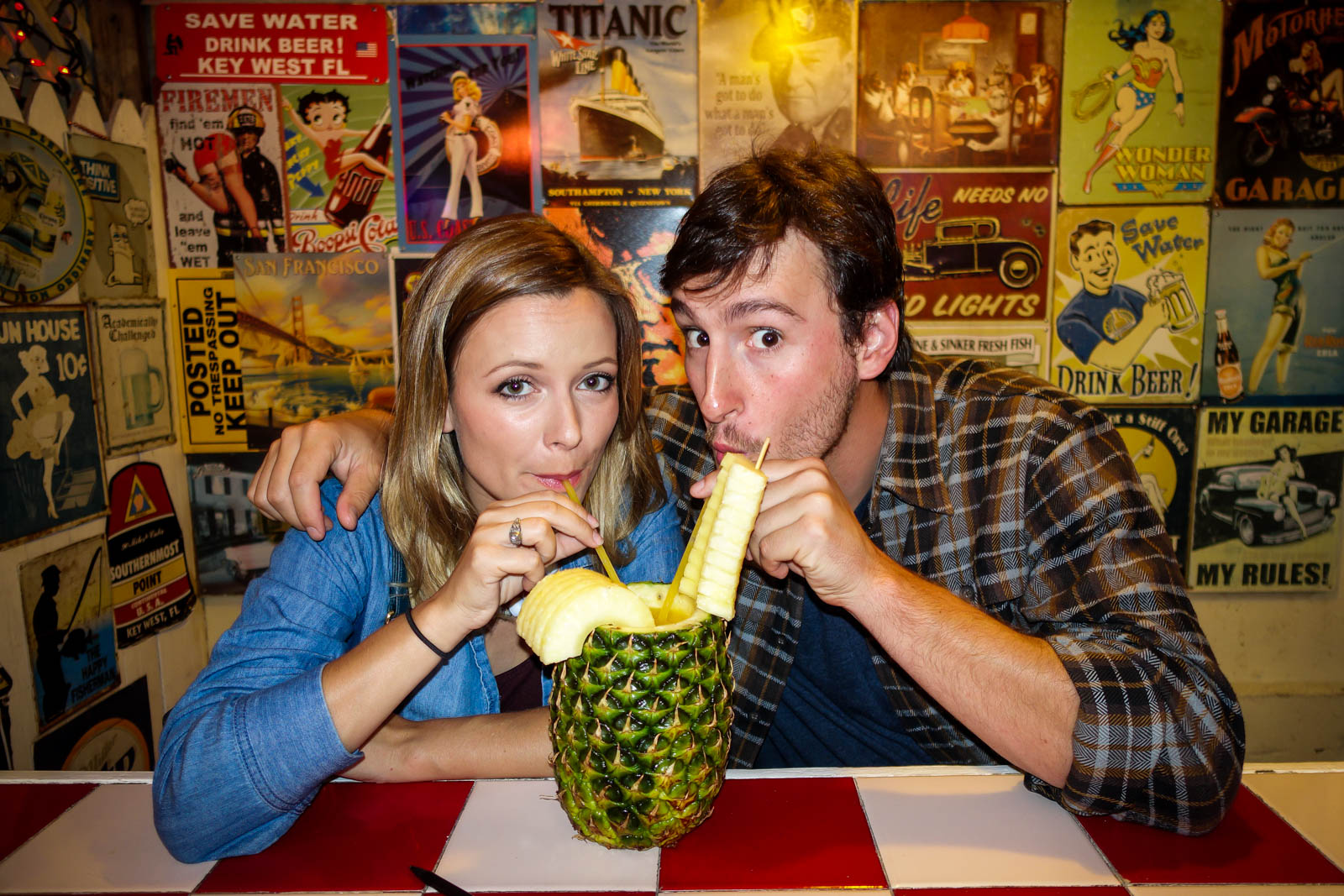 Excuse me, can you please refill my fruity drink? I’ll just be over here, sun bathing on the beach as my dog crashes through the shallow aqua waters of the Florida Keys. 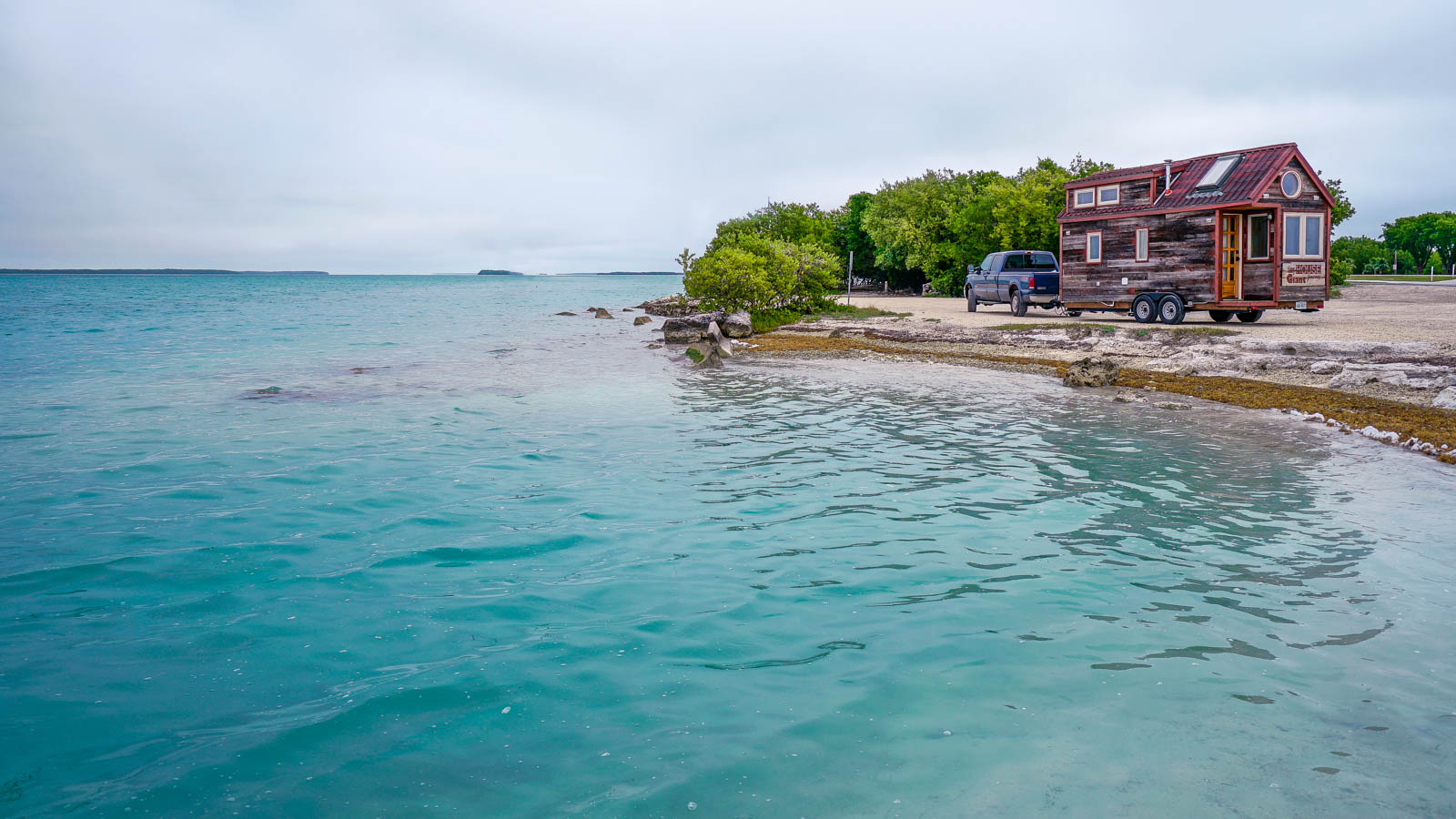 Do you know how expensive it is to RV in a the Florida keys in peak season (which is winter, because the “snow birds” are all traveling south)? It could easily cost $80 a night for a parking spot in a crowded campground! Guillaume and I were very lucky to be invited to stay in the Islamorada driveway of Chester and Michelle for six days, otherwise we may have never made it to the southern most point of the U.S.A.

We had such an amazing time in the Everglades that Guillaume and I decided we needed to go another National Park, and not just any National Park –  one that encompasses an isolated island and a gorgeous underwater wonderland, the Dry Tortugas.

The problem? A last minute trip to the Tortugas is difficult to schedule. But, once again, luck was on our side and we booked the last overnight camping permit available for rest of the week! The morning of our trip, we woke up at 4am and drove for two hours to catch our ferry out of Key West.

“So, do you want to go?”  The Captain of the “Tortuga Titanic” asked. The boat is actually called the “Yankee Freedom,” but I renamed it. You’ll see why…

I arched my eyebrow, perplexed. “Of course, why?”

“Why?? Do you see the ten foot seas out there? I’m thinking about calling the whole thing off!” He replied, as if the danger was quite obvious.

I peered out at the black ocean as the sun was just starting to sprout over the horizon. The waves beat up agains the dock and the wind howled.  It was obvious.

In the end, we decided not to go. I was hang dog the rest of the day. Why hadn’t I checked the weather? Guillaume tried to make me feel better by taking me out to breakfast at a French cafe, and that’s where we learned about the terrorist attacks in Paris.

So our first day in the Keys was dampened by disappointment and sadness. A somber paradise. But tomorrow is always a new day.

Unlike her sister keys, Largo and West, Islamorada feels more like a small town than a tourist haven. I noticed that the locals have a special way of describing cardinal direction along the Keys. Every location along the Overseas Highway can be chronicled by a specific mile marker and either by “bayside” or “ocean side.”

Robbies – Bayside mile marker 77.5 –  Feed the Tarpon! It only costs a few dollars and these fish are worth a stop. We also did a snorkel tour out of Robbie’s to Alligator Reef and Alligator Lighthouse. It was affordable, but I wouldn’t say it’s the best snorkeling I’ve ever done. Then again, I’ve been spoiled by my adventures to the Great Barrier Reef and the kelp gardens of Catalina Island.

On of the shops at Robbies

Island Grill– Oceanside mile marker 85 – Nightly live music and decent food right on the waterfront. Try to tuna nachos and conch fritters. I fell in love with conch fritters in the keys and ordered them everywhere!

Lazy Days Restaurant – Ocean Side mile marker 80 – Enjoy a cocktail on the sandy beach patio, and watch the wading birds. 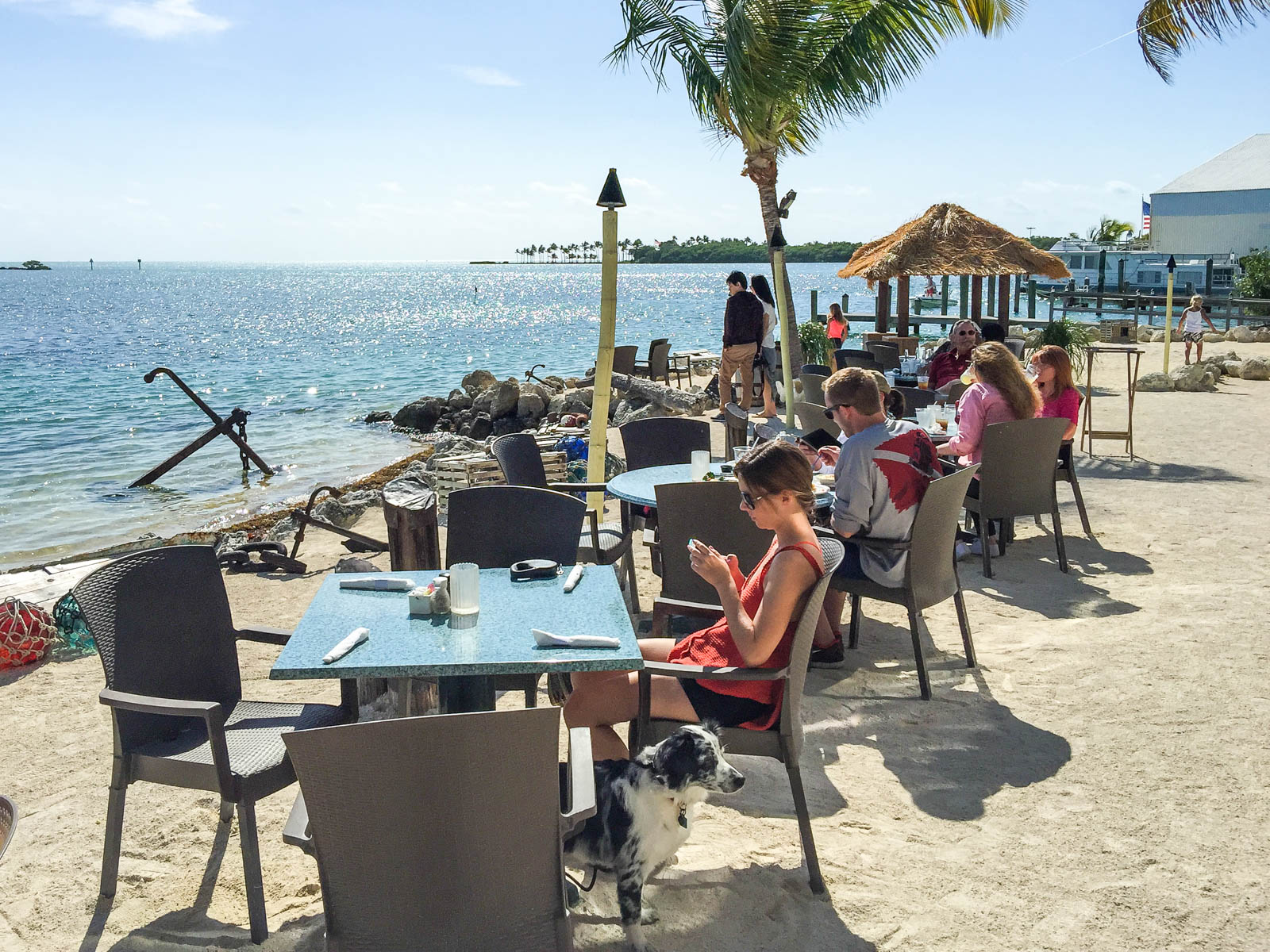 Islamorada Brewing Company – Oceanside mile marker 82.3  – Try a flight of the local beers before heading out to dinner.

Anne’s Beach – Oceanside mile maker 73 – Elevated walkways allow you to enjoy a picnic while staying dry. Or, do like we did, and get wet! Walk way out at high tide and enjoy crystal clear shallow high waters.

Mrs. Mac’s Kitchen – Mile Marker 99 – This is actually in Key Largo and (because of that) a little touristy. Still worth a stop for the conch fritters, key lime pie and atmosphere.

Our very favorite experience in the Keys was spent one night out on Chester’s boat, idling around the mangroves, bully netting for lobsters. Chester had special lights on the front of the boat that illuminate the water. Three of us would stand at the bow, nets in hand, scouring the water for lobsters.

“Got one!” Someone would yell and Chester would slam the boat into neutral. Down the net would go and, with any luck, up would come a lobster! We probably caught five or six throughout the night, but only one was a keeper: MINE! A fireball celebration followed at the local Tiki Bar, as well as a hangover the following day. I wish we had photos of the experience, but it was just too dark. The only photo I can share is the delicious reward.

As I ate the lobster, I realized that I’m 28 years old and I’ve only ever eaten meat that’s been caught for me. This was the first time I’ve actually “hunted.” For a moment, I felt as if I’d gone from a delicate princess to warrior woman. I caught this food! I’m basically Katniss or Xena!!! Not that I let it go to my head or anything… but Guillaume has yet to catch a keeper fish on this trip… just saying.

Better Than Sex – a dessert restaurant

We returned to Key West for an overnight trip, so that it wouldn’t forever be remember as a place of sadness. We sipped pineapple cocktails, laid in hammocks and drooled over decadent desserts at Better Than Sex (a dessert restaurant).

“The Smallest Bar in the Keys”

We didn’t really party in Key West, which is what you are supposed to do. Instead we walked through the shops and enjoyed the artwork at a variety of galleries. A few of them even had live artists at work, which was pretty spectacular to watch. We ended the night laying in a hammock near the Southern Most Point of the United States. A few months ago we were thousands of miles north in Quebec, and a few months before that we were another few thousand miles west in Los Angeles, where this all started. 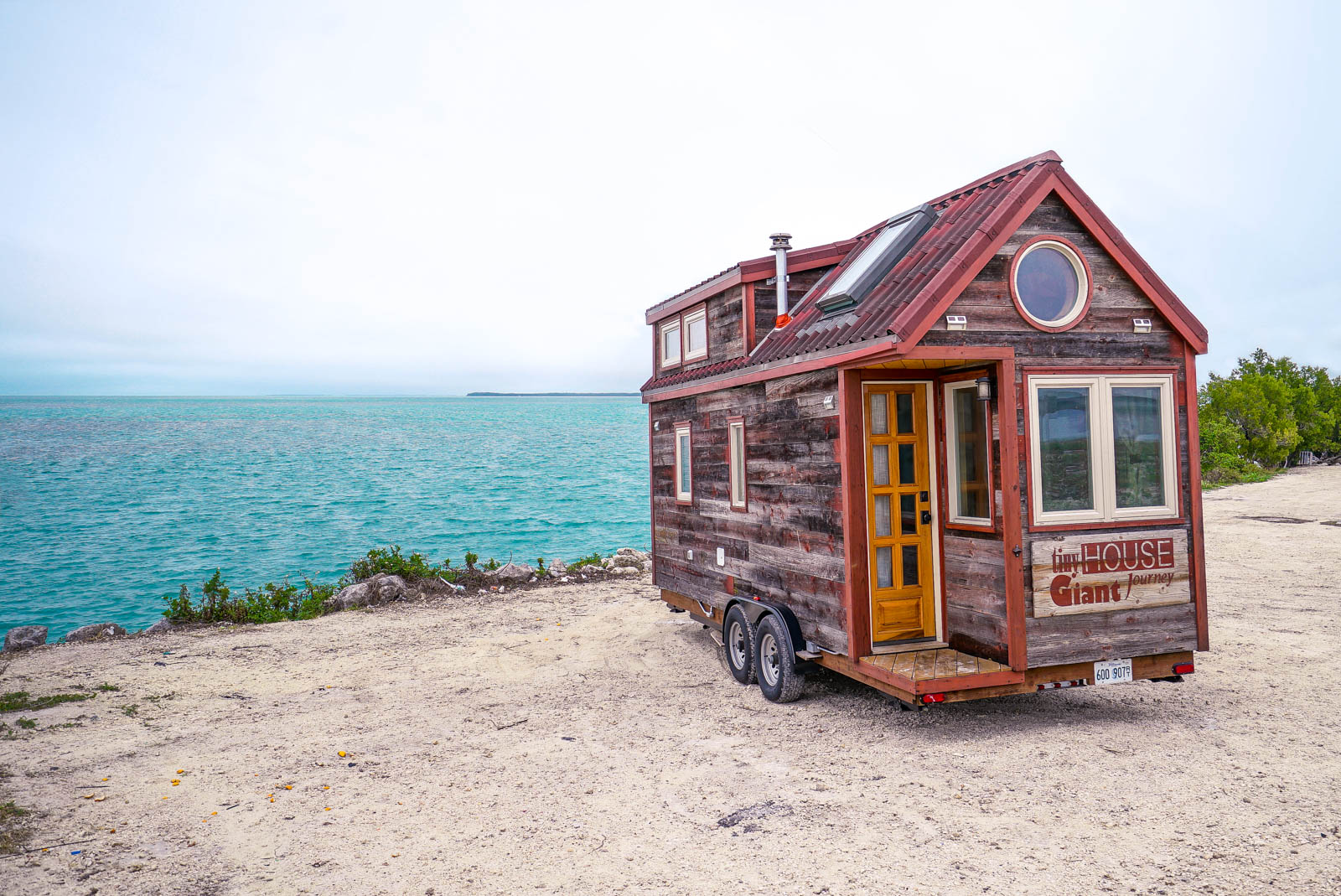 Up next: Beaches and babes!

PS: Thanks again to Michelle and Chester for the hospitality!