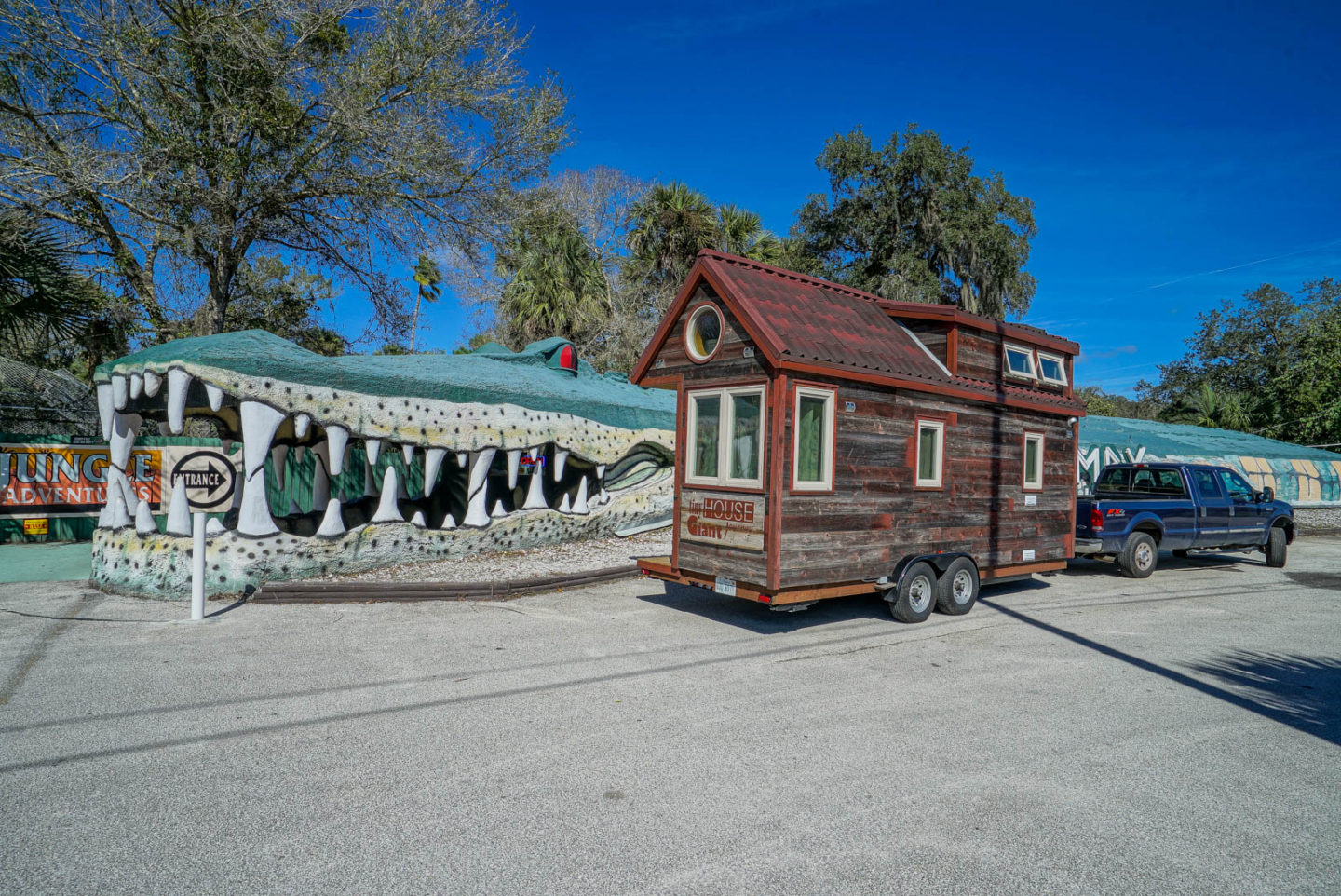 If you love theme parks, you will love Orlando. There’s absolutely no doubt about that. If you’re the type of person who despises “overly produced fun,” Orlando might be your definition of hell on earth. I happen to have an immense appreciation for all that is kitschy in this world. When I go to Orlando, I drink the Kool-aid. I drink it until I’m drunk and sick. Cursing that dreaded evil mouse with all his “magic” and “happiness.” Swearing he’ll never see me again (but, of course, he will). You see I’m addicted to corn-ball entertainment and, as with Gatlinburg, Tennessee, I take pleasure in the ridiculousness of it all.

My parents were only able to stay one day in Orlando before heading back to their lives in central Illinois. The four of us decided to explore the Kennedy Space Center, which is a pseudo theme park. “Pseudo” because it’s a theme park trying to be a museum. There are thrill rides, and it is possible to eat a chili cheese dog while flipping through interactive displays. There are “characters” walking around allowing you to take selfies. Although, these characters are actual astronauts.

My favorite part of our day at Kennedy Space Center was the Astronaut Talk. We were lucky enough to have Alfred Worden giving our talk, a man who actually flew an Apollo spaceship to the moon. He is, in every sense of the word, a real American hero. His stories of space travel were intoxicating, but it was obvious that the other members of the audience weren’t as impressed. Children were running around the aisles. Middle-aged women were chatting, giggling and texting. 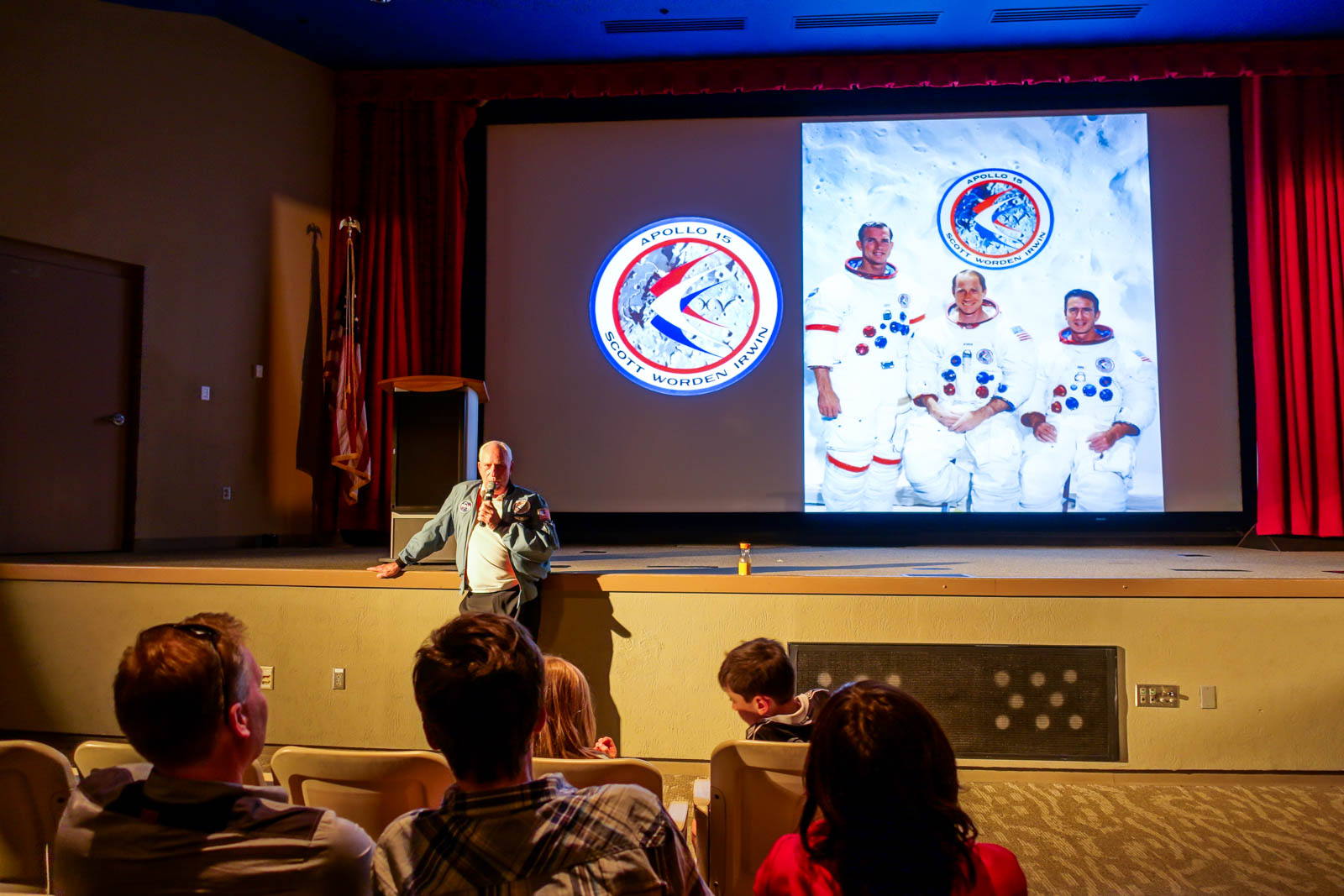 My father stood up at the end of Mr. Worden’s speech and shook the man’s hand. His speech impressed us, and even though the audience was quite rude, we enjoyed it.

The following day, we said goodbye to my parents and headed to Theme World RV Park. So far Guillaume and I have traveled over 9,000 miles and we’ve stayed in dozens of campgrounds all over the United States and eastern Canada. We’ve never been turned away. NEVER! Theme World might have been the first… 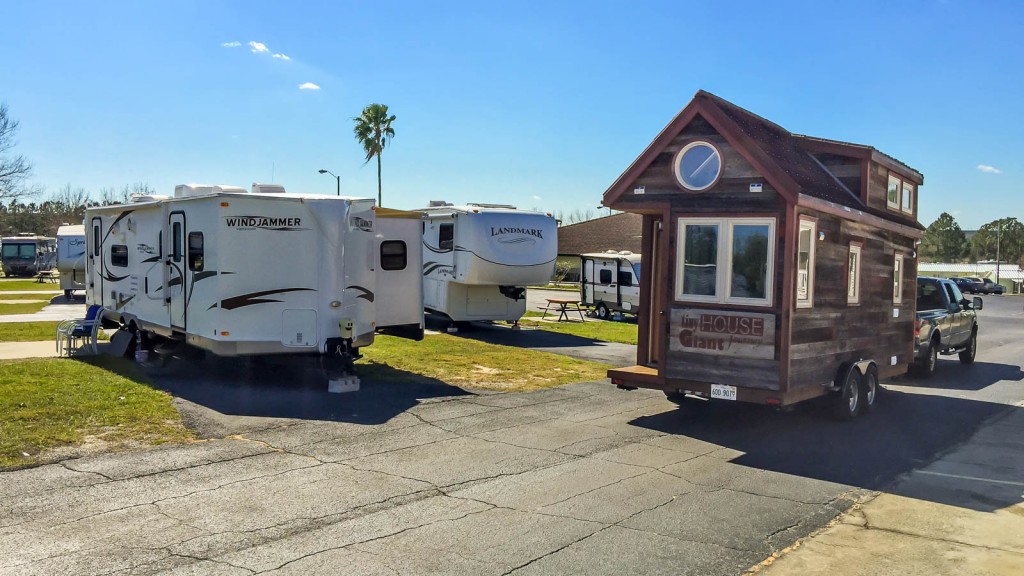 I walked into the registration office. The young woman sitting at the front desk was staring at my tiny home, idling outside with Guillaume in the driver’s seat. The response I’ve grown used to goes something like this:

“I’ve never seen anything like that! It’s so cool!”

But this young woman’s response was quite different.

She scowled… “Did you call ahead and tell them that you were bringing…. this?”

“I told them I was bringing a 24 foot travel trailer.” I said. “They didn’t ask for details.”

I’ve learned over the last five months that it’s easier to explain what the tiny house is upon arrival. Keep it simple over the phone, because usually when people actually see the tiny house they are very excited. If I had described my tiny home as a “self-built RV,” the campground owners might imagine that I’ve attached a dilapidated shack to a truck bed with elmer’s glue and toothpicks. So I usually avoid details unless probed.

“I guess it’s okay,” she said reluctantly, after being unable to reach her manager. We parked and stayed for three nights. As usual, many of our neighbors complimented the tiny house and were in awe of the comforts revealed inside. No one from management ever came to kick us out.

One of my best friends from high school now lives in Orlando with her husband. They are traveling nurses, and they live in a real RV with their two dogs. A year ago they were stationed in southern California and had helped us put the siding on our house. This was the first time they had seen the house complete.

We did, of course, go to Disney World.

As always, I was fully committed to the magic-of-the-mouse and was giddy as a school girl. Guillaume on the other hand is not a fan of theme parks, musicals, kookiness or waiting in line. He’s such a scrooge. But even he had a good time. It’s impossible not to have fun at Disney!

One experience I highly recommend is kayaking on the Winter Park Chain of Lakes. We rented a few kayaks and paddled down narrow picturesque canals, canopied by lush trees, connecting several fresh water lakes. Cypress trees were scattered throughout the lakes, making comfy perches for a variety of birds. I was able to identify commodores and anhingas from my bird watching in the Everglades, which was rewarding.

Four hours later our arms were aching and we headed back. I lost my balance as I was docking my kayak and somehow managed to fully submerge myself in two feet of water! Only I could do something like that. I’m such an klutz!

We spent a few nights in Orlando hosted in the driveway of Randa Black. She was an amazing host, lending us kayaks and allowing us to have an epic open house where almost one hundred people showed up to tour our home.

The weekend ended with the Orlando Tumbleweed Workshop, which Guillaume and I hosted and showcased our home. There was some electrical malfunction at our hotel, so we weren’t able to plug in the tiny house. We spent three nights without electricity, but a little “glamping” never killed anyone.

Next: It was time to relax and head west. We had our first taste of parking in the woods on private land.