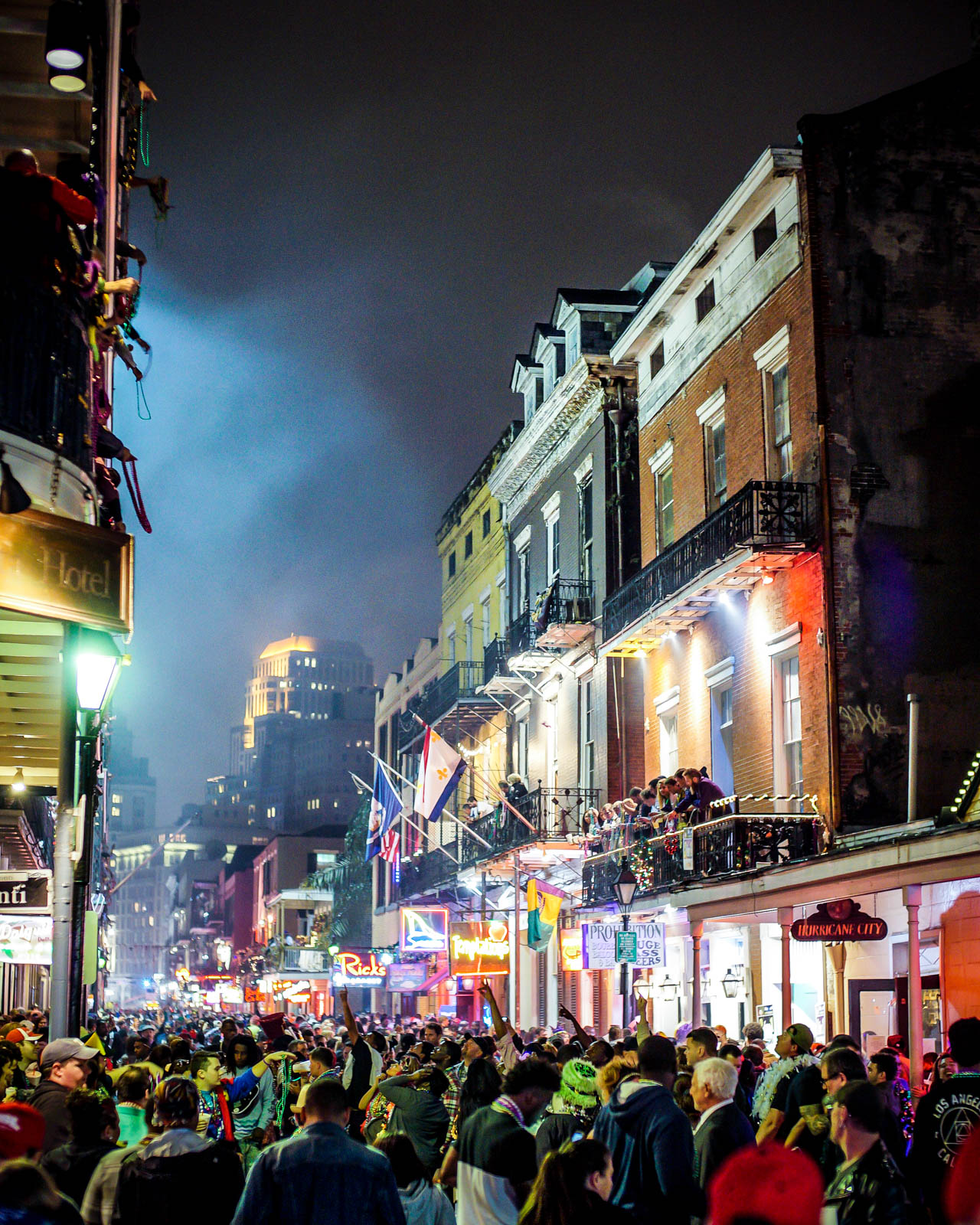 It’s Mardi Gras! After a relaxing week parked on my uncle’s private property in Pensacola, we decided to change things up a little… and party!

We parked our tiny home at the New Orleans East Kampground in Slidell, Louisiana. They reached out to us a few months back and offered us free parking, during Mardi Gras. How could anyone say “no” to that?!?

During our stay, we also had a French TV crew fly in to film us for a documentary titled (in english) “My House Like No Other.” As some of you know, Guillaume is French. He was born with dual citizenship through his American mother and moved to the United States about seven years ago.

Although, being French in Louisiana means something different altogether. It’s true that Louisiana is the French-ist state in America, and the history behind the squabbles between the French, Spanish and Colonial Americans for this land is written on the walls. Literally. You can read about it on the walls. 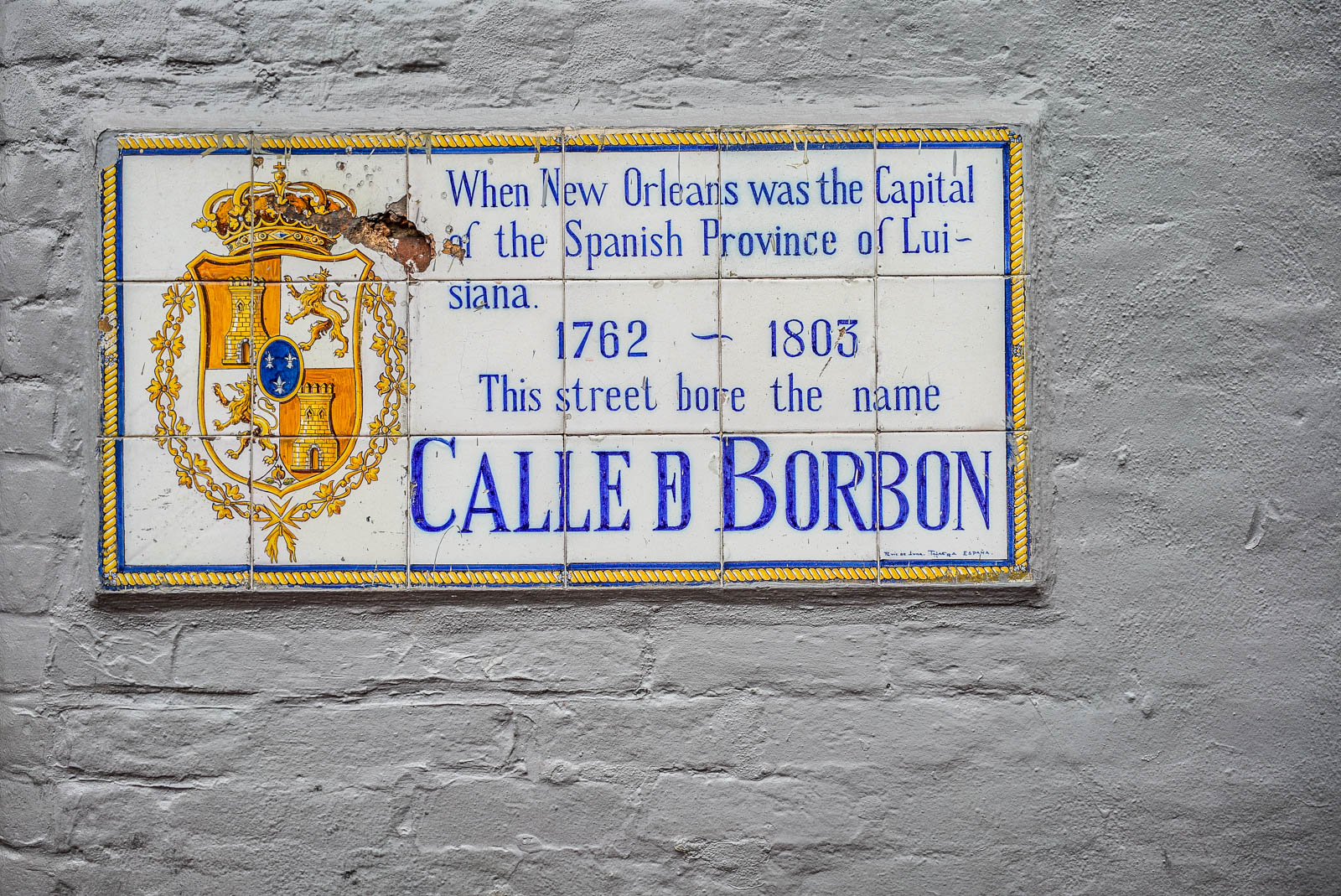 This part of the world was conceived by opposing pedigrees and from their womb emerged an extraordinary mutt. A clashing of architecture, language and food snatched and mixed from the genes of purebred ancestors.

Louisiana is a pinch of Spanish, a dash of French, a dollop of Victorian, etc… A beautiful cacophony, with its own colorful identity.

The Food: Cajun / Creole. It’s saucy, spicy and delicious. The best meal we had was at 801 Royal.

The Architecture: A mixed bag. Shutters from France. Patios from Spain. Columns from the Victorian period. Upon my arrival everything was decked out in purple, gold and green. 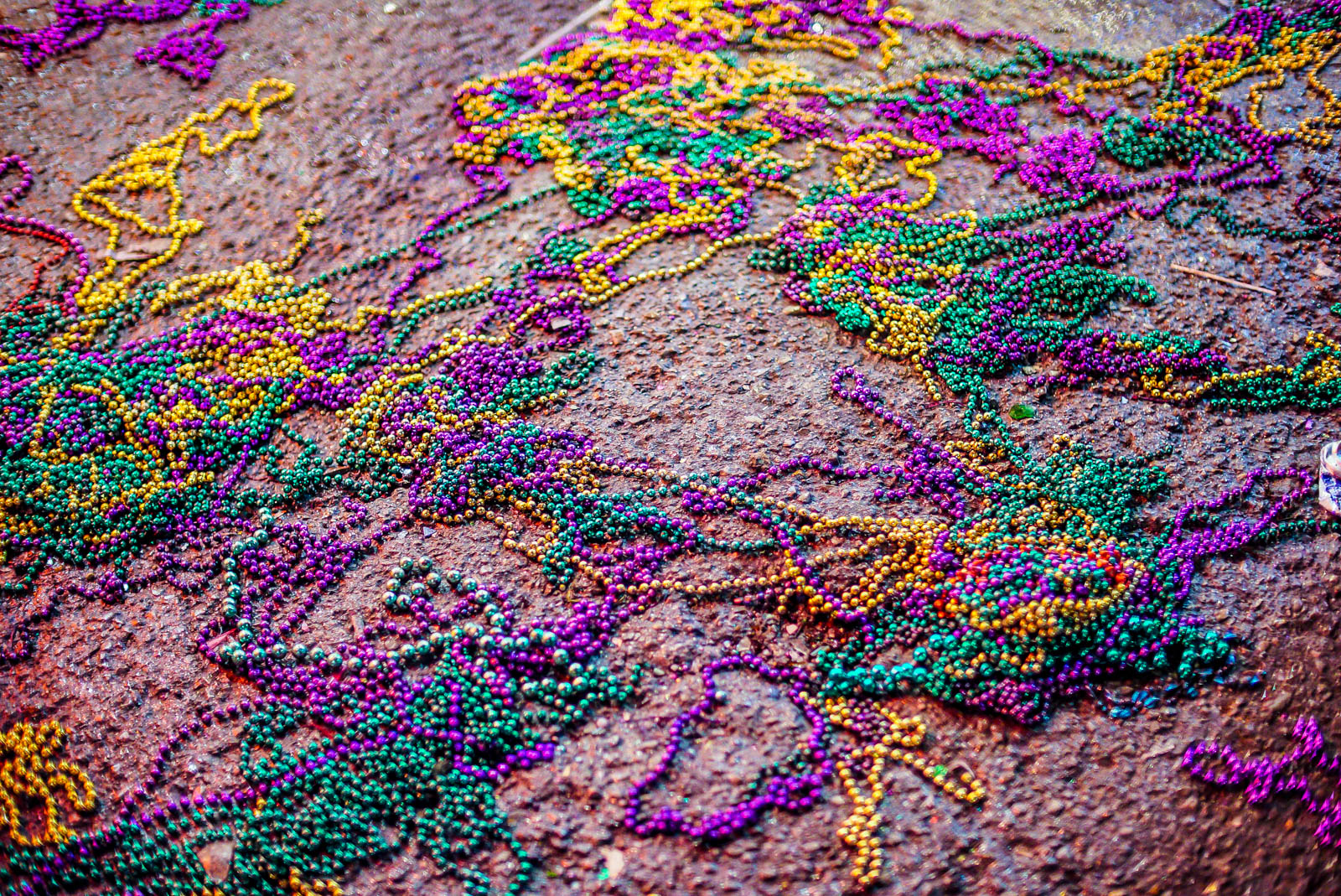 The following day was Mardi Gras. We took some local advice and woke up early to drive into town and secure a parking spot. It was chilly, so the first item on the agenda was to warm our bellies with coffee and beignets at Cafe Du Monde. 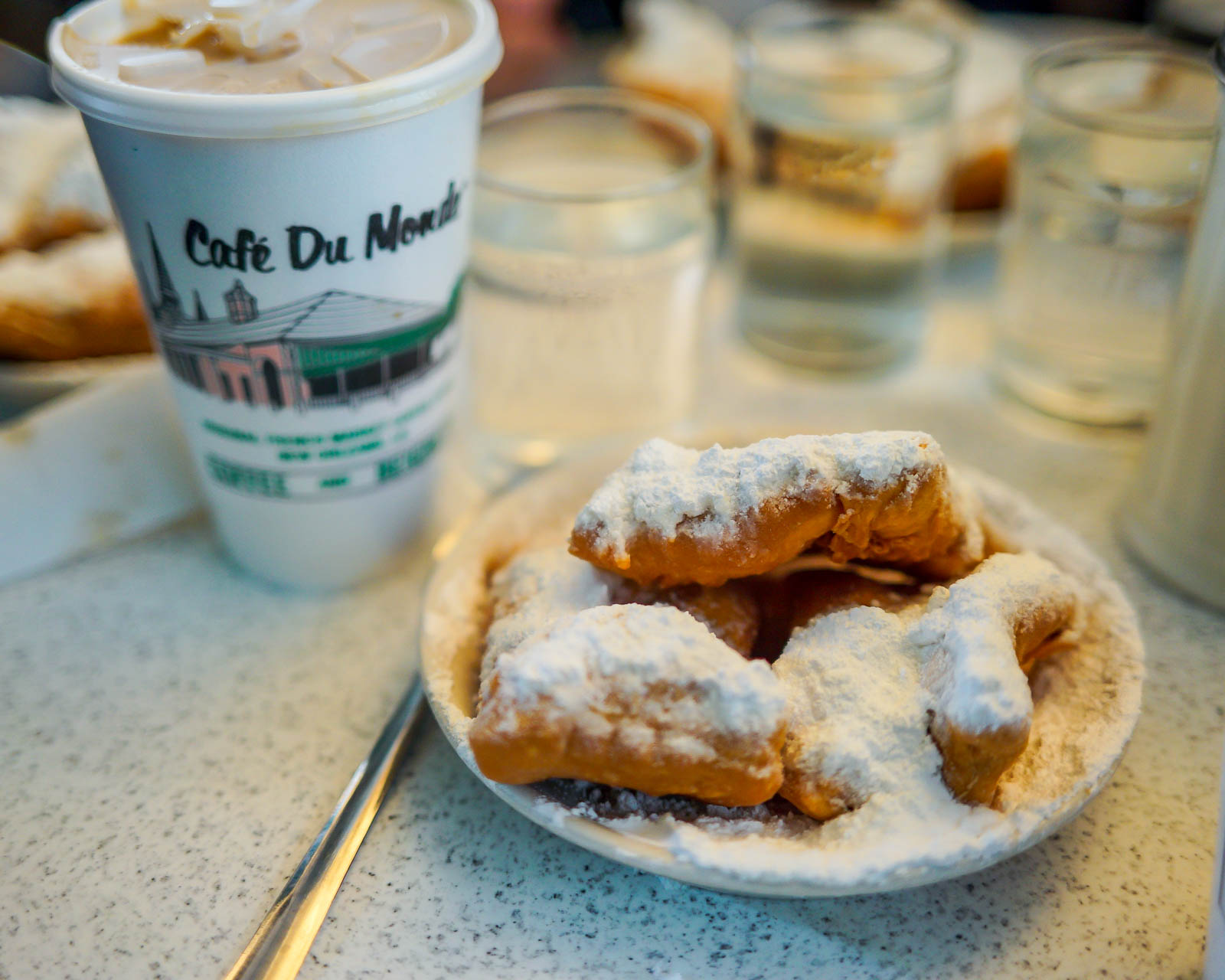 Next, the parade. The Zulu parade is another fine example of the cultural blender that is New Orleans. Named after a fierce African tribe, the parade’s floats are hallmarked with giant statues of tribal royalty. The float riders sport blackface and throw coconuts and beads to the hungry crowd. We (the crowd) fought for the objects as if they were precious stones.

But not everyone was having a good time. Behind us there was a small gathering of religious fanatics with megaphones and signs proclaiming us sinners and warning that “hell awaits.” These scowling saints have become part of the ambience, a staple of Mardi Gras, which I doubt was their intention. Many times they would instigate screaming matches with passing drunks. “God hates what you are doing!” and “The fire awaits unless you repent!”

And finally, this guy. I hope this person was punched multiple times during the day.

This comical (and often offensive) display of “sinners and saints” reminded me of the Halloween Celebration Guillaume and I attended last year in the streets of Salem. Several times I saw a fight break out between a sign holder and a passerby, which I suspect is exactly what the sign holders want. We ignored them as best we could.

WARNING: Stop reading here if you are offended by nudity.

As the night went on (and on and on), we saw elaborate costumes swimming through the Bourbon street sea. Women showed their breasts for beads. Trash blanketed the sidewalk. Police officers pushed through the crowd, riding towering horses.

Hierarchy on Bourbon Street. There are essentially two classes: Those one the ground (peasants) and those on the balconies (royalty). The peasants would beg and plead for the royals to drop gifts down below. Some peasants would dance or strip, others would ignore their sovereigns above. The more necklaces you wore by the end of the night, the more impressive you were to the other commoners. 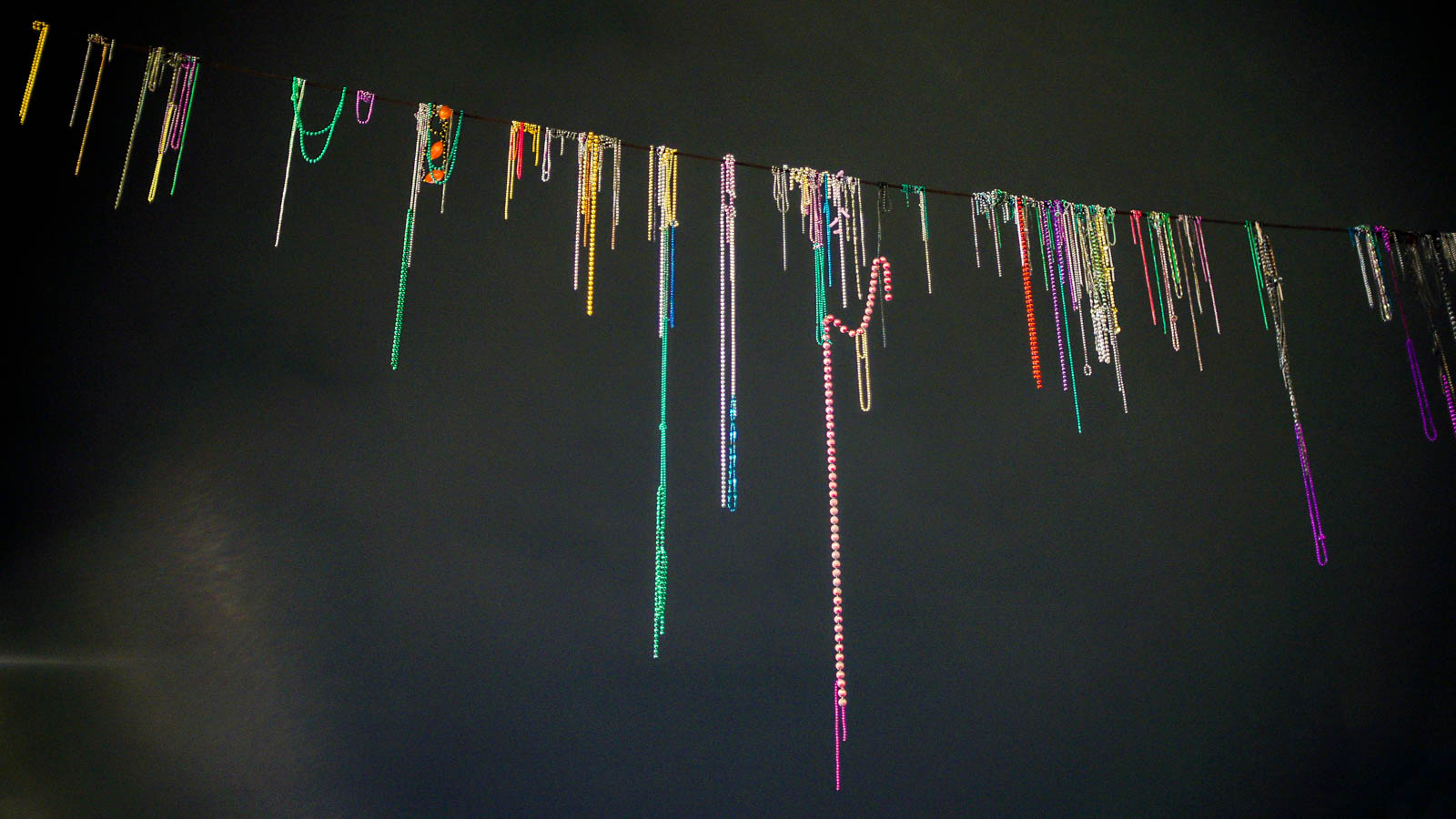 Guillaume and I enjoyed the festivities for a few hours and then headed home before it got too wild. I guess we’re getting old!

Next: We parked next to a legendary tiny house. Get ready for another video tour!

*Big thanks again to New Orleans East Kampground for hosting us! If you would like to host us at your campground, please contact us.