After leaving the craziness of Mardi Gras in New Orleans, we drove on over to Lafayette, Louisiana to park next to a legendary tiny house, that of Art Cormier. View tiny house features and full video tour here.

Art’s has a large yard, citrus trees and his commute to work is about ten steps (or five jumps for joy)! Art has a great set up and we were honored to piggy back off of it for a few days.

Aside from parking next to and touring Art’s extremely well designed tiny home, we had three amazing local experiences in Lafayette. I like to describe them as: 1). BOIL 2). BOOGIE, and 3). RIDE.

Guillaume and I were virgin crawfish boilers… baby boilers? Crawfish newbies? Anyhow, we had never had the privilege of attending a crawfish boil before Art graciously hosted one. If you’ve never heard of a crawfish boil, it’s where you order live crawfish by the bag and boil them with spices, sausage, corn, potatoes, etc. They are then served over a newspaper covered table, where you peel the tails and eat with your hands.

It was a slow, messy meal. I felt as if  I had never eaten before and needed to learn how. Not to worry, everyone was happy to show me the “correct way to peel a crawfish!” I soon found out there are many correct ways to peel a crawfish, and everyone has their own preferred method that they believe in whole heartedly.

I tried my best to master the art of crawfish eating, but I failed. In the end, it didn’t matter. My belly was full and my lips were pin-prickled from the spices! But, oh boy, was it delicious! My mouth is watering as we speak… I want to go back!

Guillaume and I had a couple of opportunities to listen to Cajun music in Lafayette. Once at the Blue Moon Saloon, a local hangout and hostel, and another time at Arnaudville’s NUNU Collective. I even tried dancing!! In my humble opinion (gulp, I hope I don’t offend anyone), Cajun music is similar to a Celtic jam session. All the musicians sit in a circle or semi-circle and the band is primarily string instruments. I was also reminded of the fabulous street performer we watched in Quebec City last fall. 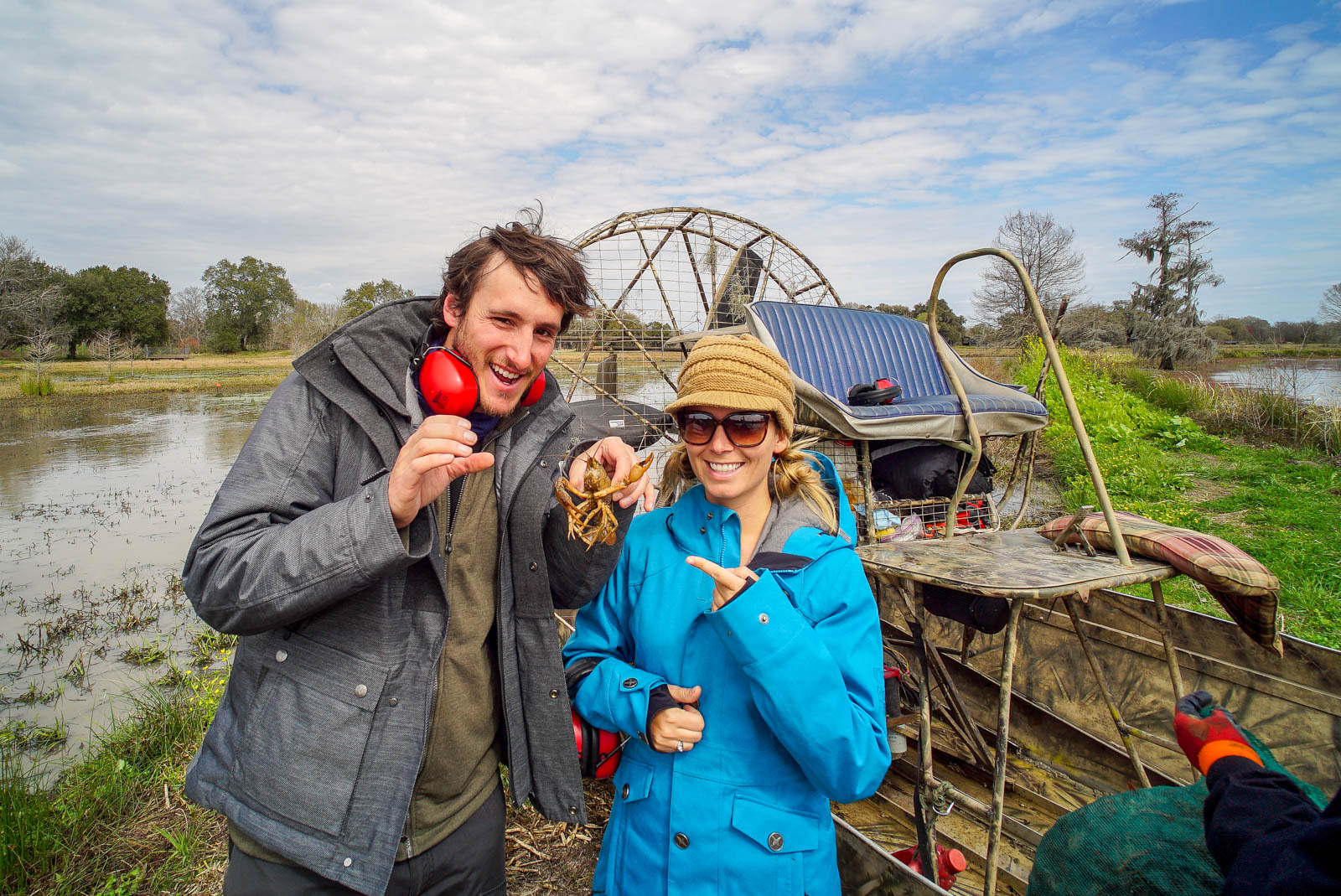 We were lucky enough to take a ride with Art’s friend Brian, on his own self-built airboat. I have to admit, I was really nervous! Especially when Brian said: “If you don’t hold on, you will fall in!” At first I grasped the metal bar with two hands and squeezed until my knuckles turned white. After a few minutes, I relaxed and the ride was smoother than I ever imagined. “It’s a magic carpet ride,” Brian said later, and I agreed.

This ride marks one of the TOP THRILLS of the trip so far. Up there with the salty hike we took in Nova Scotia, Lobster Hunting in the Keys, and the ranger lead canoe trip in the Florida Everglades.

Another note worthy experience in Lafayette was a delicious lunch served up by The French Press in downtown Lafayette. After lunch, we took a nice stroll around main street and found a metal sign spelling “LAFAYETTE,” but the “Y” was constructed of chicken wire and full of Mardi Gras beads. I’m told usually the “Y” is not present at all, so that tourists can take a photo using their body to create the “Y.”

The “Y” is full of Mardi Gras beads

After only three days, we left Lafayette, even though we were desperate to stay longer. We’ve now entered an accelerated portion of our trip; We need to get to Las Vegas for another Tumbleweed workshop. Usually, we travel slow. Savoring each stop. But now we need to drive 1,600 miles in less than two weeks! Cross your fingers that nothing goes wrong and we make it on time.