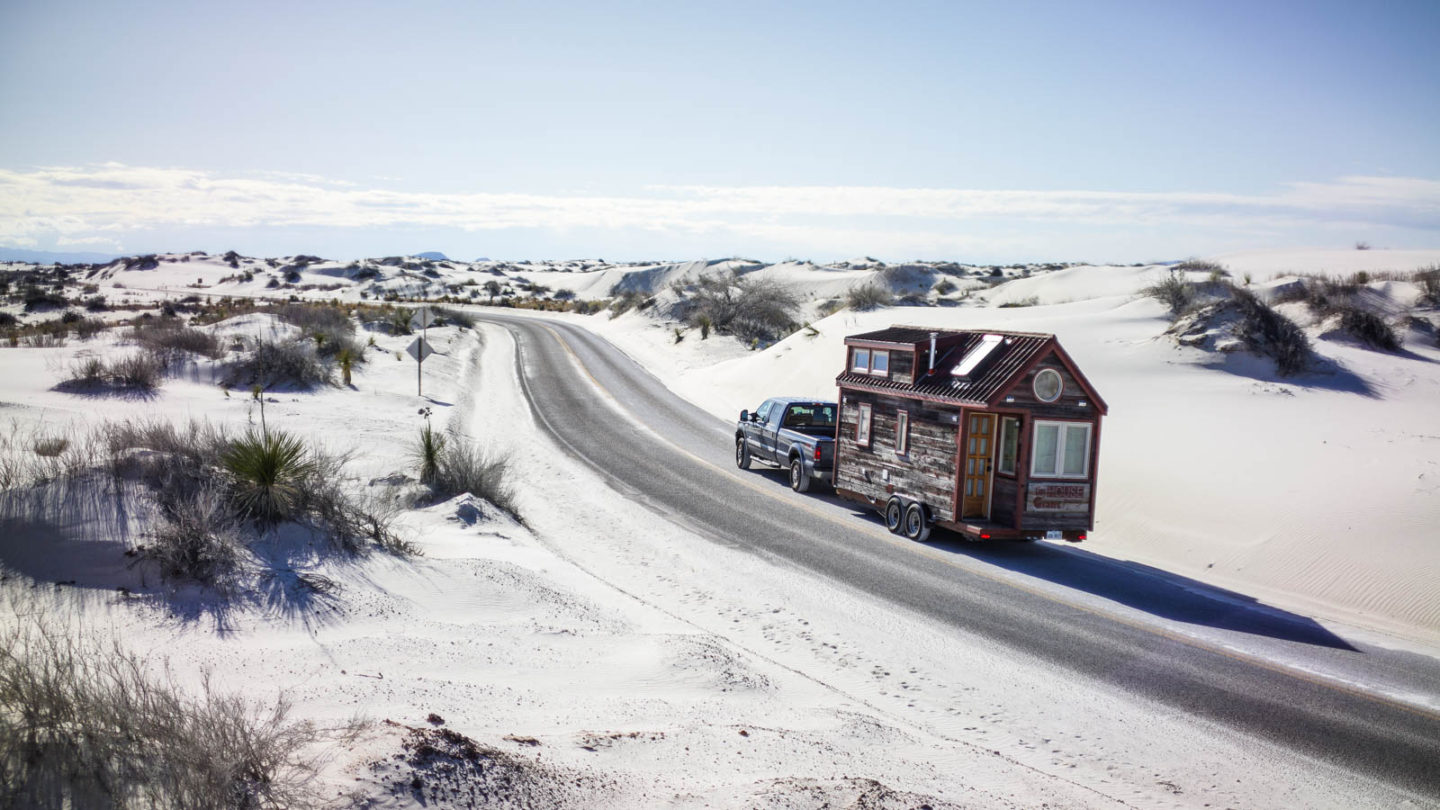 We made it to New Mexico! First stop on the agenda? White Sands National Monument. It’s been on our bucket list for years. Why? Read on and I think you’ll understand. 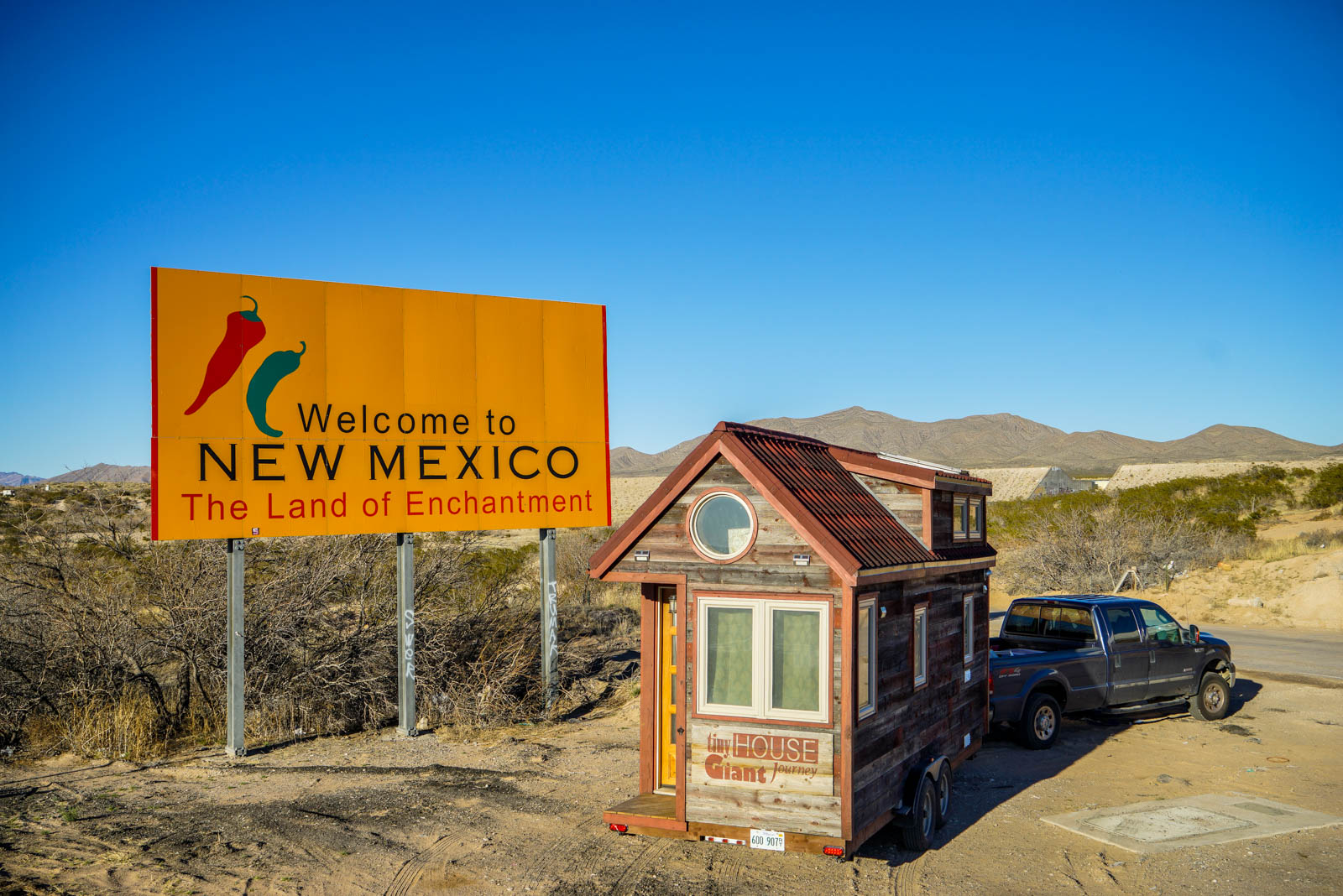 Now that we’re fully recovered from the Austin blues, we decided to check out White Sands National Monument

The plan was to arrive at the park just before dawn. Guillaume has been meaning to do more sunrise photoshoots, but it’s a challenge. You see, I prefer to snooze in our cozy loft until the sun has properly sizzled and cooked the night’s chill.

Most mornings, I find it intolerable to step onto my hardwood floors. We need skirting for the tiny house, but it’s too difficult while traveling. Instead, we’ve purchased slippers, but I usually forget to put them on until a frigid lightning bolt shoots up my calf, leaving the soles of my feet tingling.

It was 8am by the time we rolled into White Sands. Not bad considering it was over an hour drive from our campground. I considered it a win, but Guillaume was disappointed. I’ll make it up to him when we reach Death Valley. It’s supposed to be hot there, even before sunrise.

We spent the morning hiking through the dunes, which was a serious work out. The park will rent you a sled, so you could potentially hike up a dune and sled down the other side. Of course, we didn’t realize this until after our hike. We choose one of the longer marked hikes in the monument – the Alkali Flat Trail, 4.6 miles round trip through the dunes to a flat sand vista. The trail features mile marker poles sticking up in the sand, so it’s difficult to get lost.

Less than three minutes into the hike, we were completely secluded in the dunes. Only the occasional marker let us know that we were on a trail and not stranded in the middle of a desert. The wind blew softly, but without obstacles, it struggled to make noise. It was ghostly silent.

A thousand microscopic diamonds shimmered in the early morning sun. I scooped up a handful of the angelic dust, letting the sparkling grains spill from my grip to be welcomed by their identical brothers on the floor. Salies galloped, licked, rolled and spun through the crystal waves. Then she’d come sit by me and gaze into nothingness. The ivory void. I patted her head and we continued our trek. 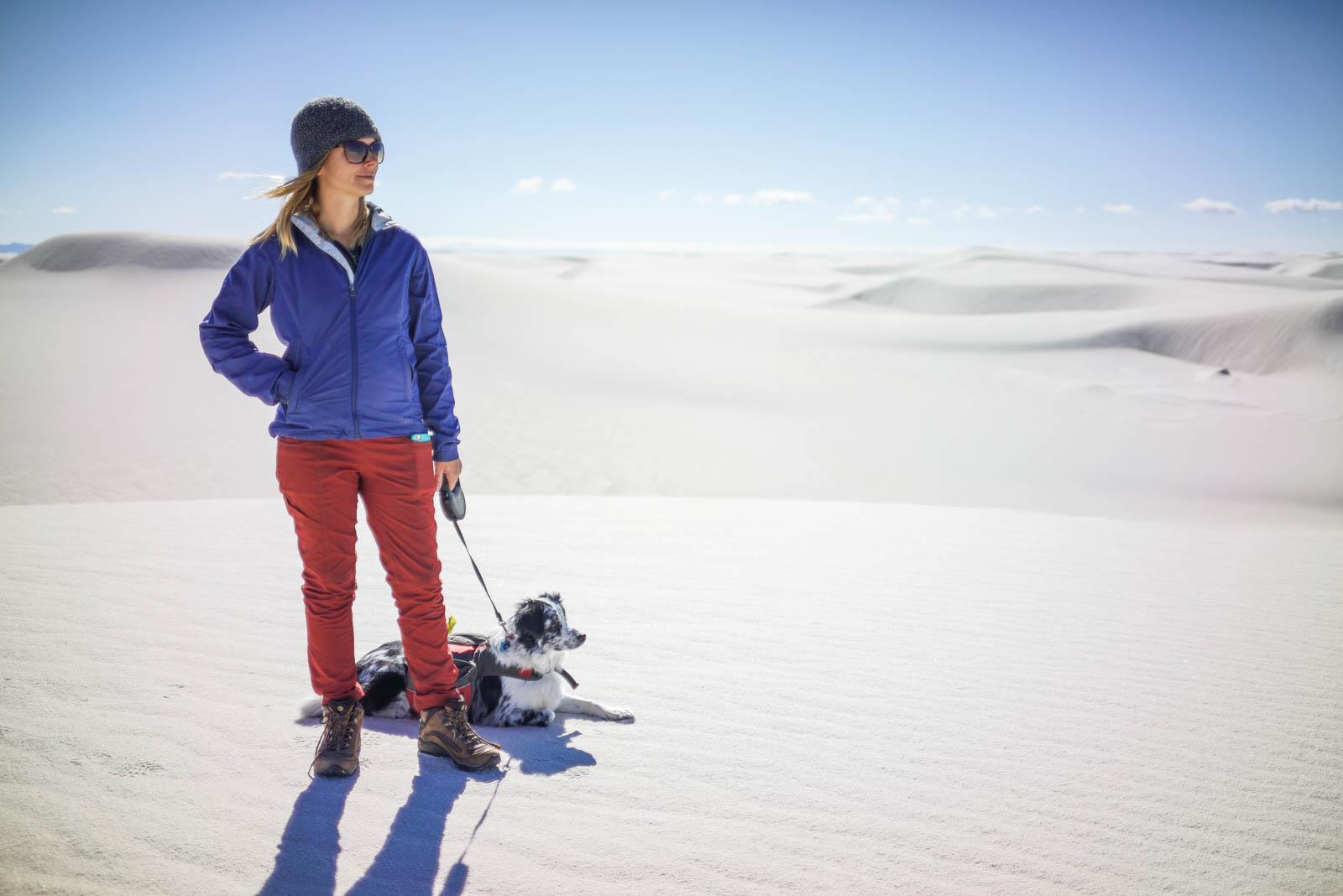 Five miles is all we went, but it seemed like we were walking for days. A hot afternoon burned off the morning light. A warm glow kissed us under the chin, reflecting off the bleached ground. I took a moment to sit still on the peak of a mountainous dune, staring out into the infinite milky sea. 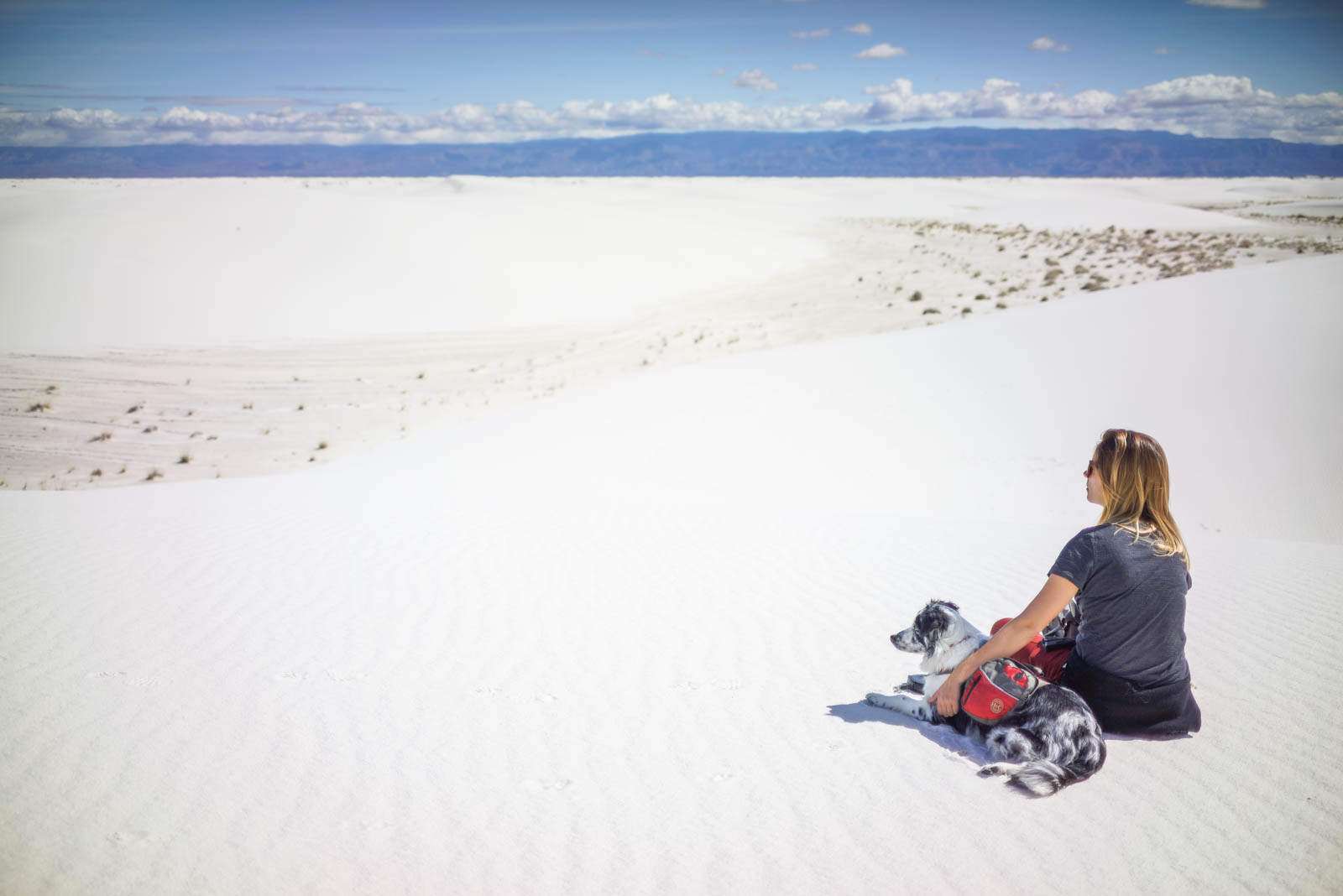 It was eery and serene at the same time. I felt as if nothing else mattered, but also that everything was put in perspective. This place was created many years before I was born and will continue to evolve many years after I die. My footprints will be erased by tomorrow, and the thought of my insignificance is almost comforting. No need to stress, or to become something I’m not and live a life that someone else wants.

Only nature can make me feel this way. 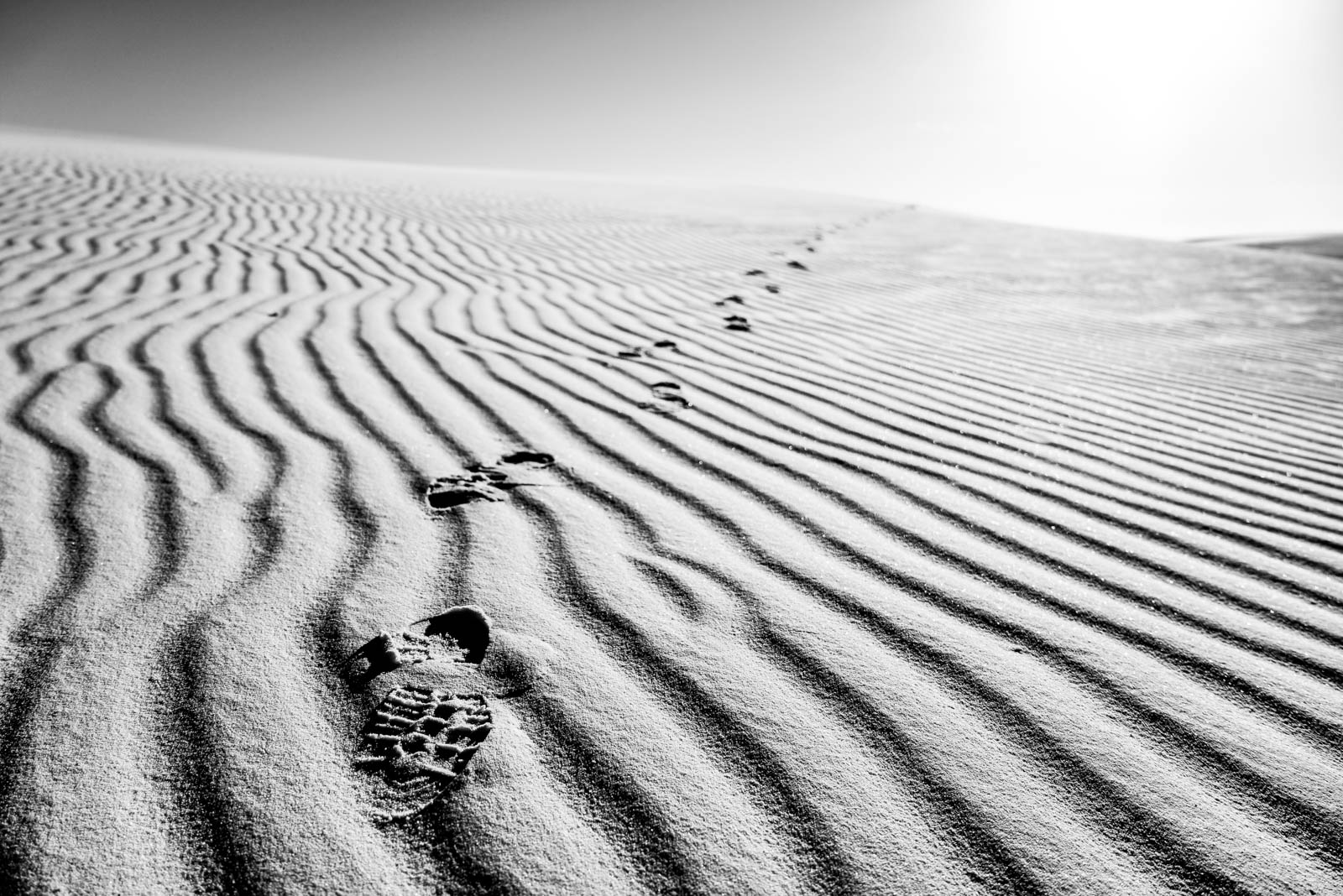