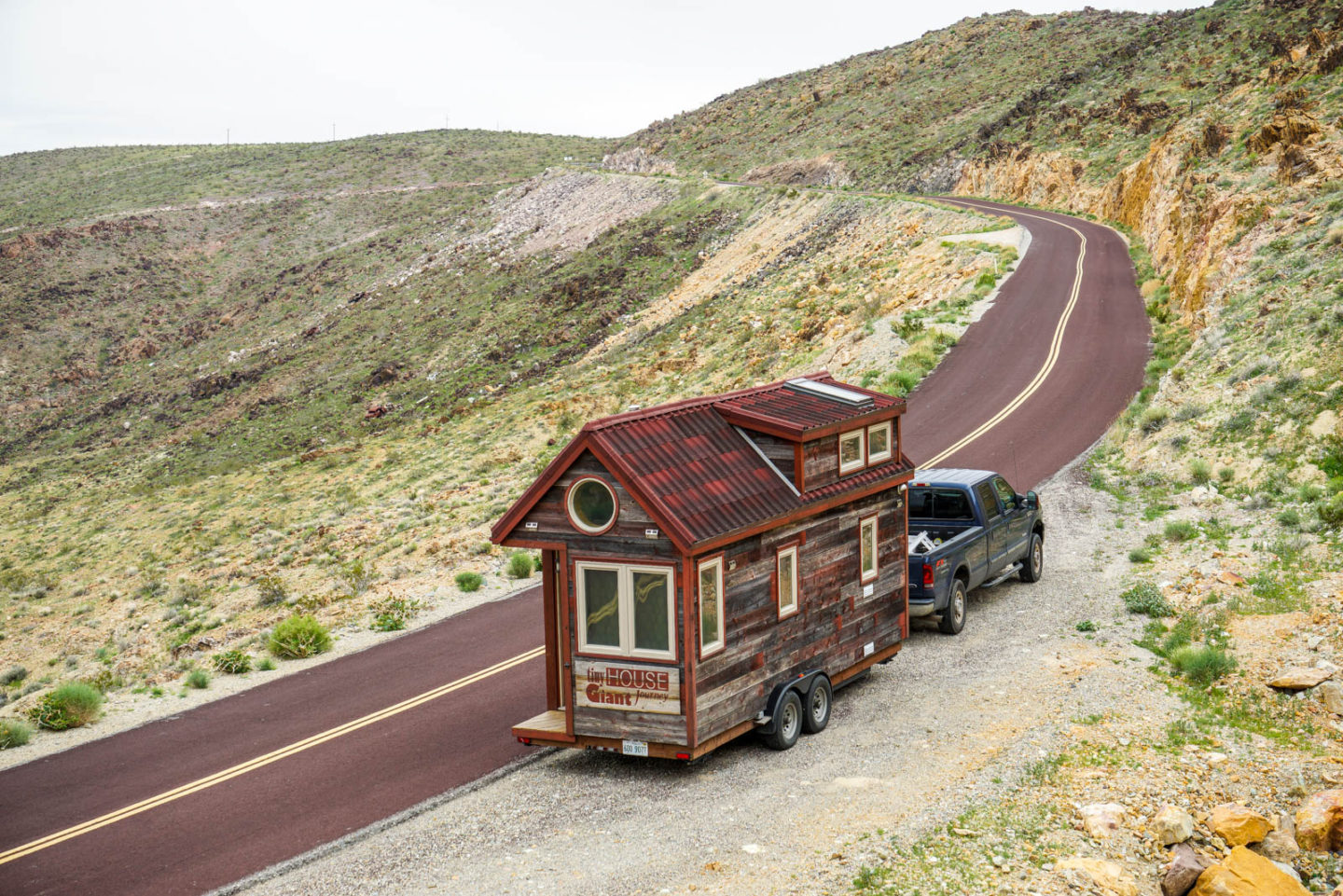 Death Valley is like no other place on earth. In fact, it holds a few North American titles: the HOTTEST, the DRIEST, and the LOWEST. 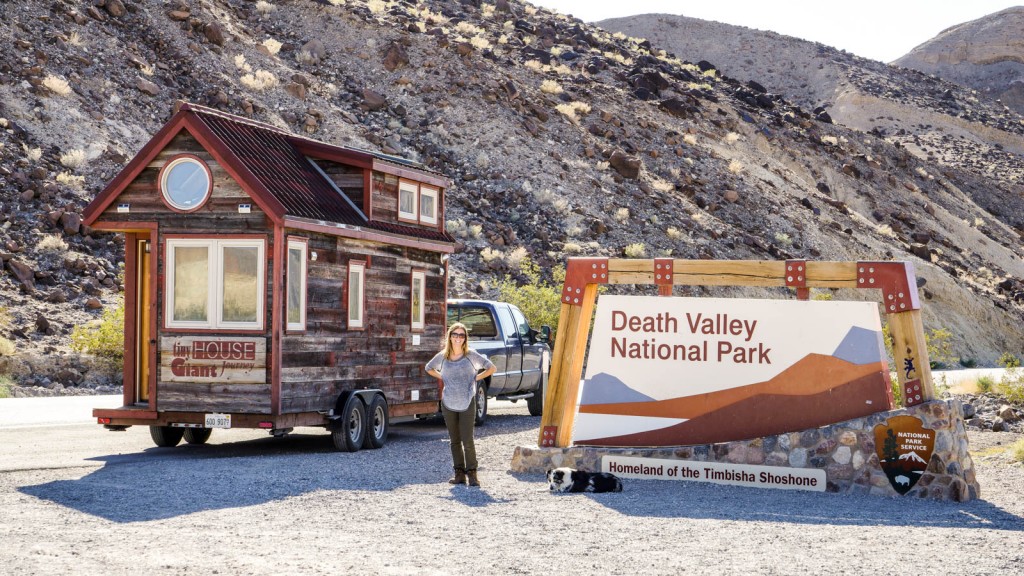 “Goodbye, Death Valley.” – A lost pioneer bid farewell to the valley that almost killed him. 1850.

The jagged painted rocks of Death Valley crumble underfoot, making them difficult to climb. Shade is hard to find, and with only a few small pools of salt water to drink, even the local plants and animals struggle to survive. At sunset the valley is smothered by a black blanket, and across the night sky a splattered universe is revealed.

I’m small, and young, and weak in this environment, I thought. Death Valley could kill me.

As I stepped outside, I felt my skin immediately tighten. It was as if all of my pores had closed to preserve moisture. Soon after, my lips dried out. I rubbed my finger pads against one another, listening to the sandpaper-like sound caused by their friction. Am I turning into a lizard? This is the greeting you receive in Death Valley.

That being said, the valley is well prepared for visitors. They have a small hotel, gas station and restaurant near the Furnace Creek visitor center. They also have RV and tent camping spots available, although all of the spots with electricity were reserved when we visited the valley. Guillaume and I decided to “dry camp” one night, and plug-in the following night. 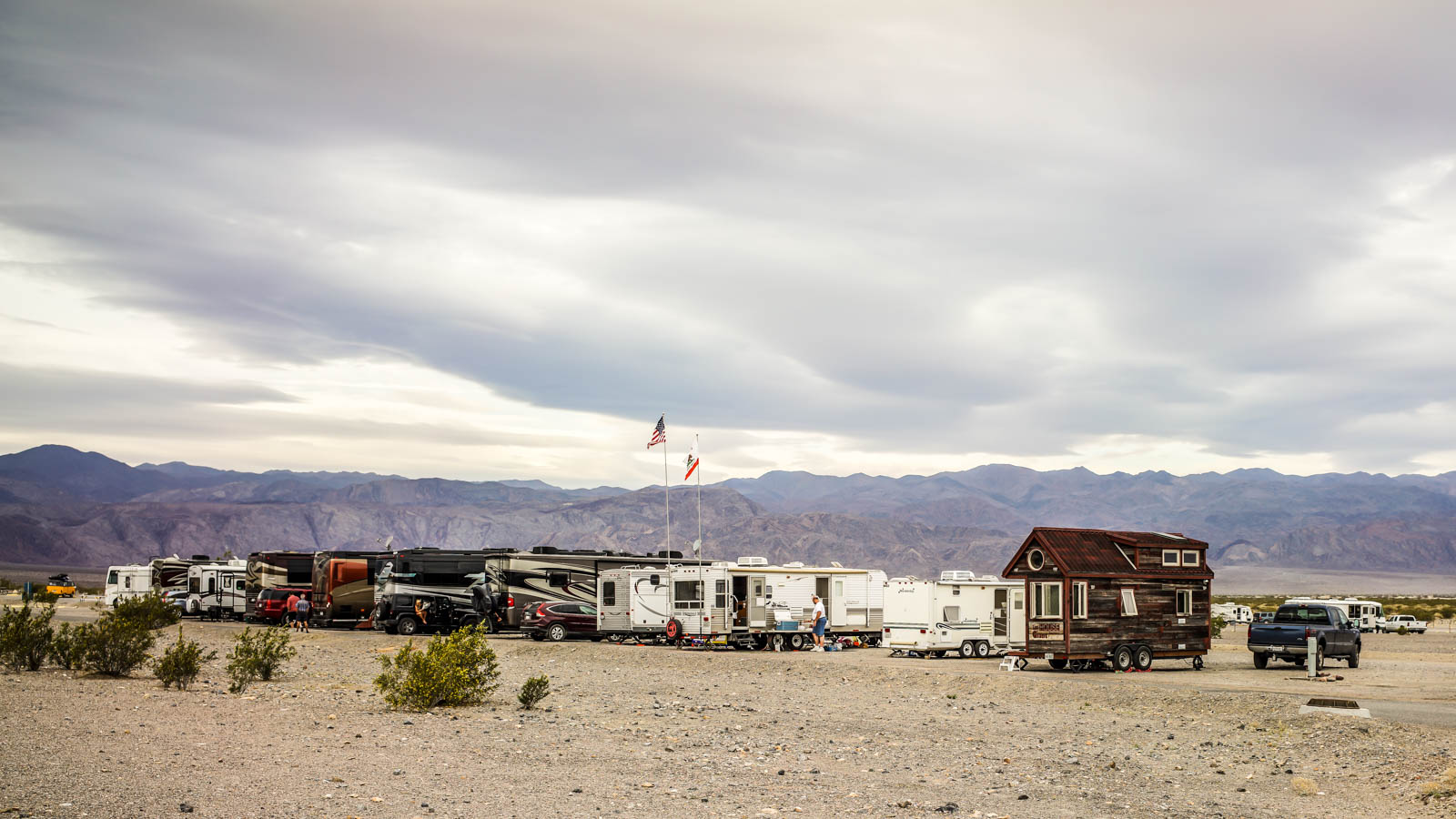 Dry camping (or being off-grid) isn’t terrible now that Guillaume has wired the refrigerator to run off of propane. Before, we would have to pack the refrigerator full of ice and hope that our food wouldn’t spoil. Now, the only inconvenience is the lack of light. We purchased a few high powered LED lanterns, which suffice.

For our first sunset, we visited “Artist’s Palette:” a gorgeous colorful rock formation that looks like a impressionist painting.

To give scale, I climbed up the purple rock (or hill) you see in the foreground, which wasn’t an easy task! Thousands of purple gravel-size rocks collapsed under my weight. I fell forward a few times, collecting a dusty residue on my palms and knees. And it was dark. Close up, it was difficult to see the difference between the colored hills.

That evening, Guillaume and I sat out on our “rooftop balcony,” or the roof accessible by our loft skylight. The valley is known to have some of the darkest skies in the United States, excellent for stargazing. The milky way illuminated the valley. Orion posed proudly. The little dipper pour diamonds into our wine glasses. The sky was so crisp. So vibrant. I wish I had more knowledge of the stars, but bathing in their silent beauty was enough. 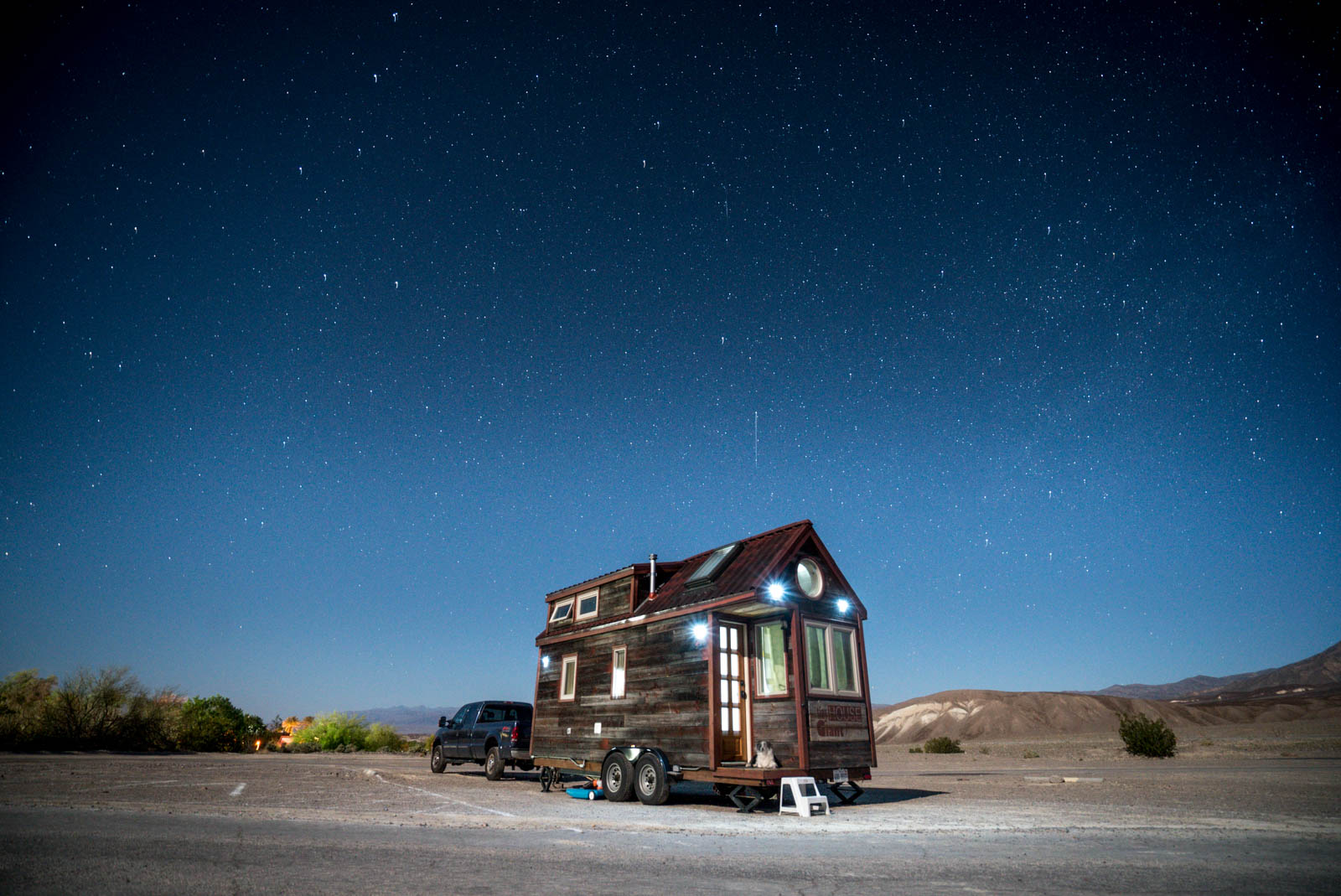 The next morning we woke up early for sunrise. I owed it to Guillaume, who was so desperate to get up early for sunrise at White Sands National Monument, but I failed him. We went to Zabriskie Point, an overlook of colorful rolling hills and mountains in the distance.

Unfortunately, the sky was too clear on the morning we chose. Guillaume would have preferred a few clouds to make the colors pop in his photos.  I’m learning more and more about landscape photography on this trip, and how patient you need to be to get the perfect photo. 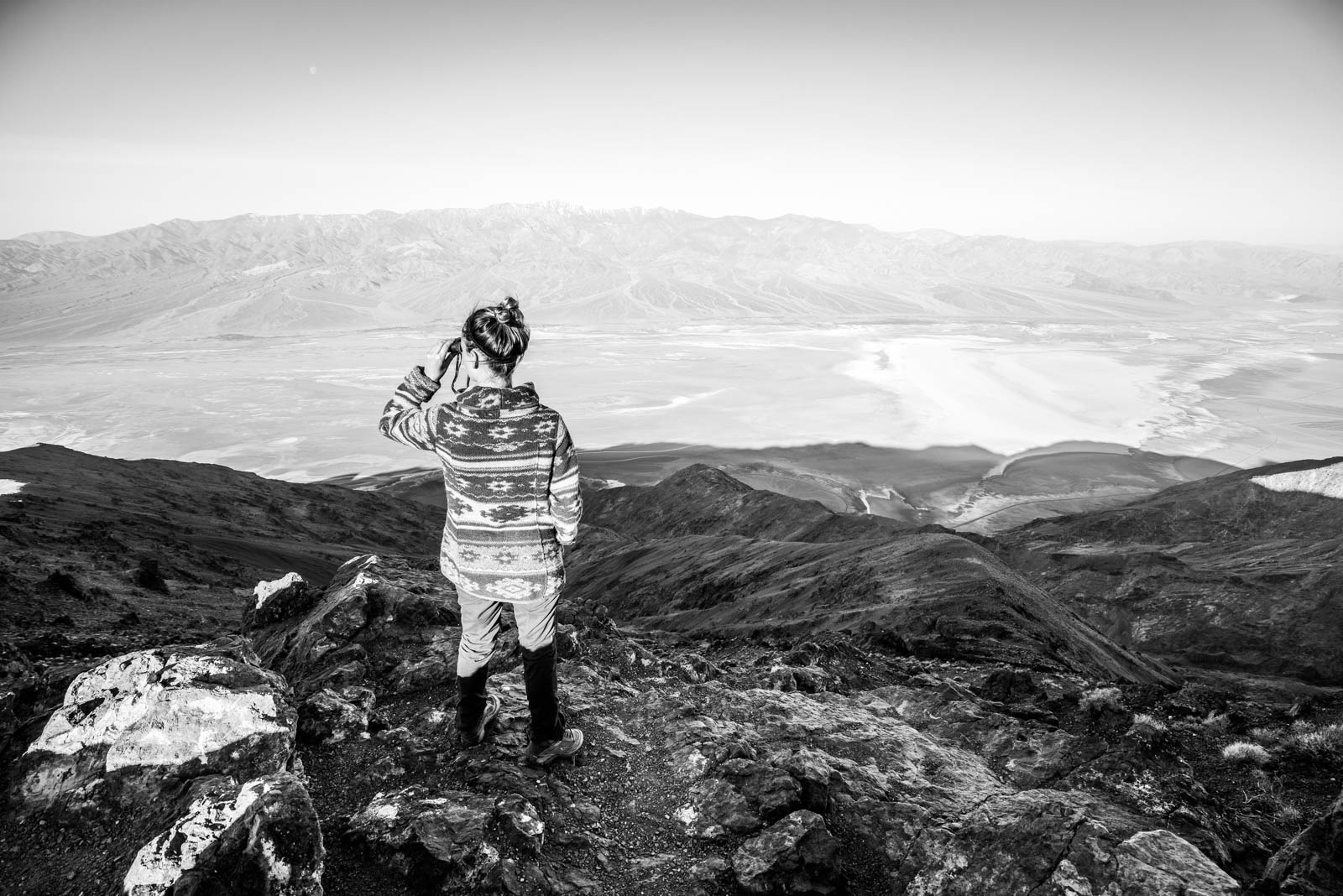 After leaving Dante’s, our tiny house decided to become a submarine. Our heavy cabin happily sunk to the bottom of Badwater Basin, the lowest point in North America. Luckily the basin is dry, as you would expect in Death Valley. Nothing is what it should be.

Legend has it that Badwater earned its name when a traveler’s horse refused to drink from its shallow pool. The water must be bad, the traveler thought, when in reality it was salty. We traversed the salt pan, which covers the infinite dry basin bed.

I brushed my fingers across the pale sandy earth, brought them to my mouth, and licked. “Yep, it’s salty.” I confirmed. Guillaume gave me a disgusted look, and then he tasted the soil for himself.

After we climbed our way out of the basin, we stopped for a quick two mile hike at Golden Canyon.

Golden Canyon is a relatively easy hike that leads to the “Red Cathedral,” a towering red rock wall. It was only midday, but the sun was already a brutal enemy. Without enough water, our colorful hike soon turned from easy to strenuous. We headed back home to rest until the sunset behind the black mountain range.

That evening we watched the sunset perched on a tall sand dune. 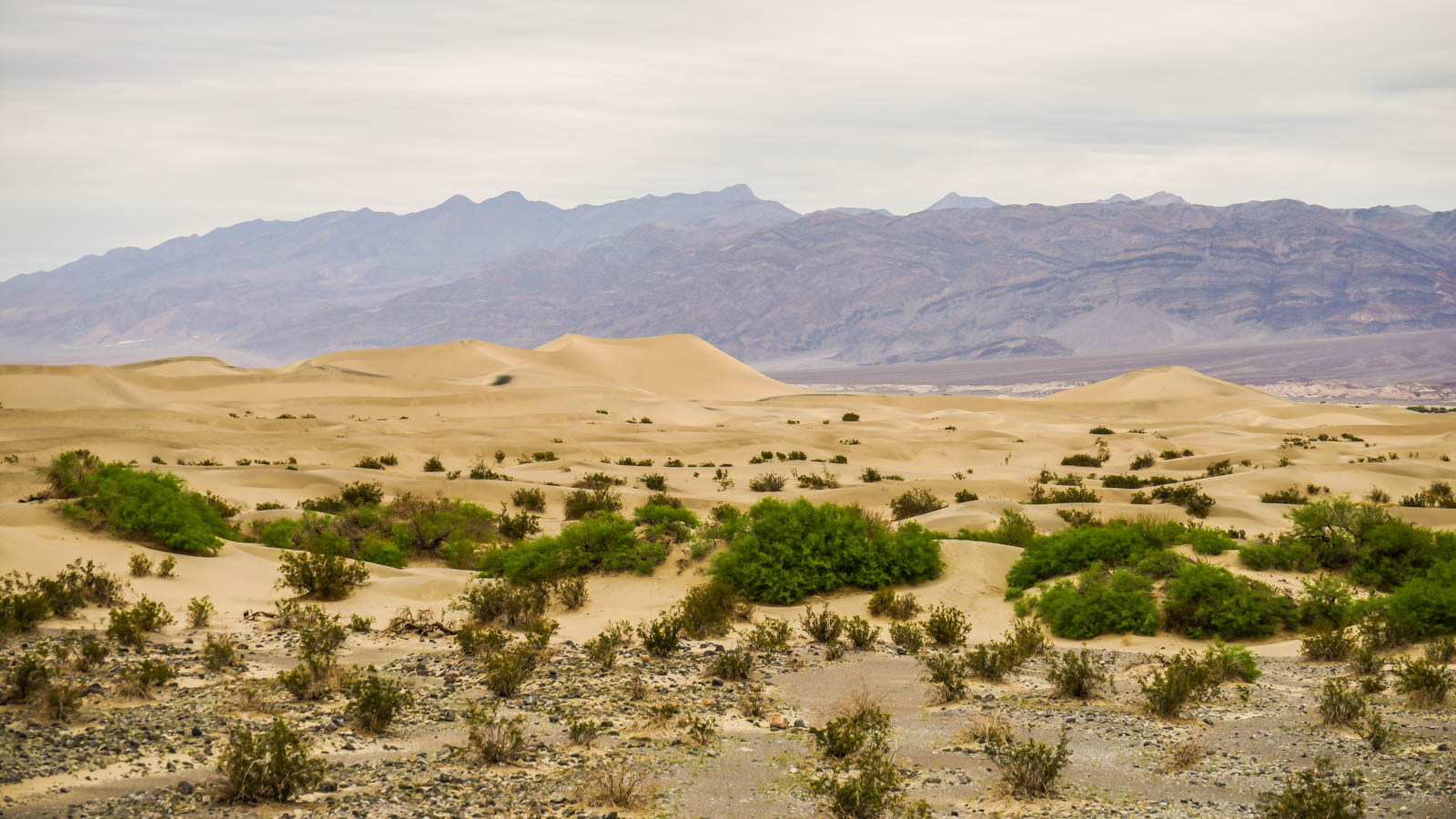 The Mesquite Flat sand dunes weren’t a shimmering white sheet, as were the White Sands, but they had their own beauty. While hiking through the rolling hills of sand, occasionally we would cross the quintessential Death Valley image: a dry bed of cracked earth. Just before sunset, we followed the tracks of a spotted beetle as he waddled home for the night, probably late for dinner with his beetle wife.

The following morning we walked the Salt Creek Interpretive trail, which was a lush landscape compared to the rest of the valley. Schools of pupfish, a teeny tiny endangered species, could be seen playing in the water.

And then it was time to leave Death Valley. As we drove away, I did glance back to see the valley disappear behind us. “Goodbye,” I might have whispered, but instead I gazed at our tiny abode, hitched to the back of the truck, and wondered where it would shelter us next. 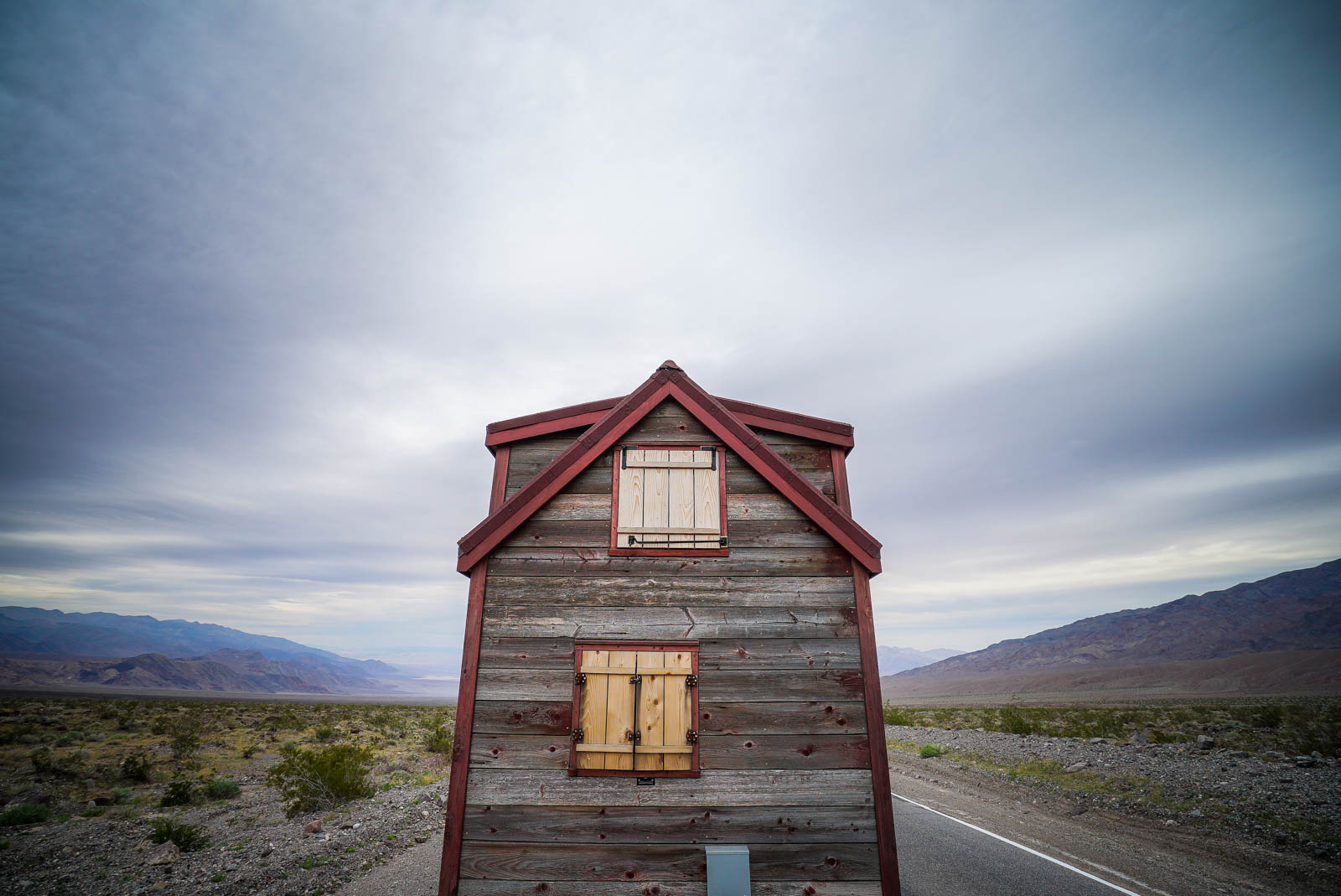