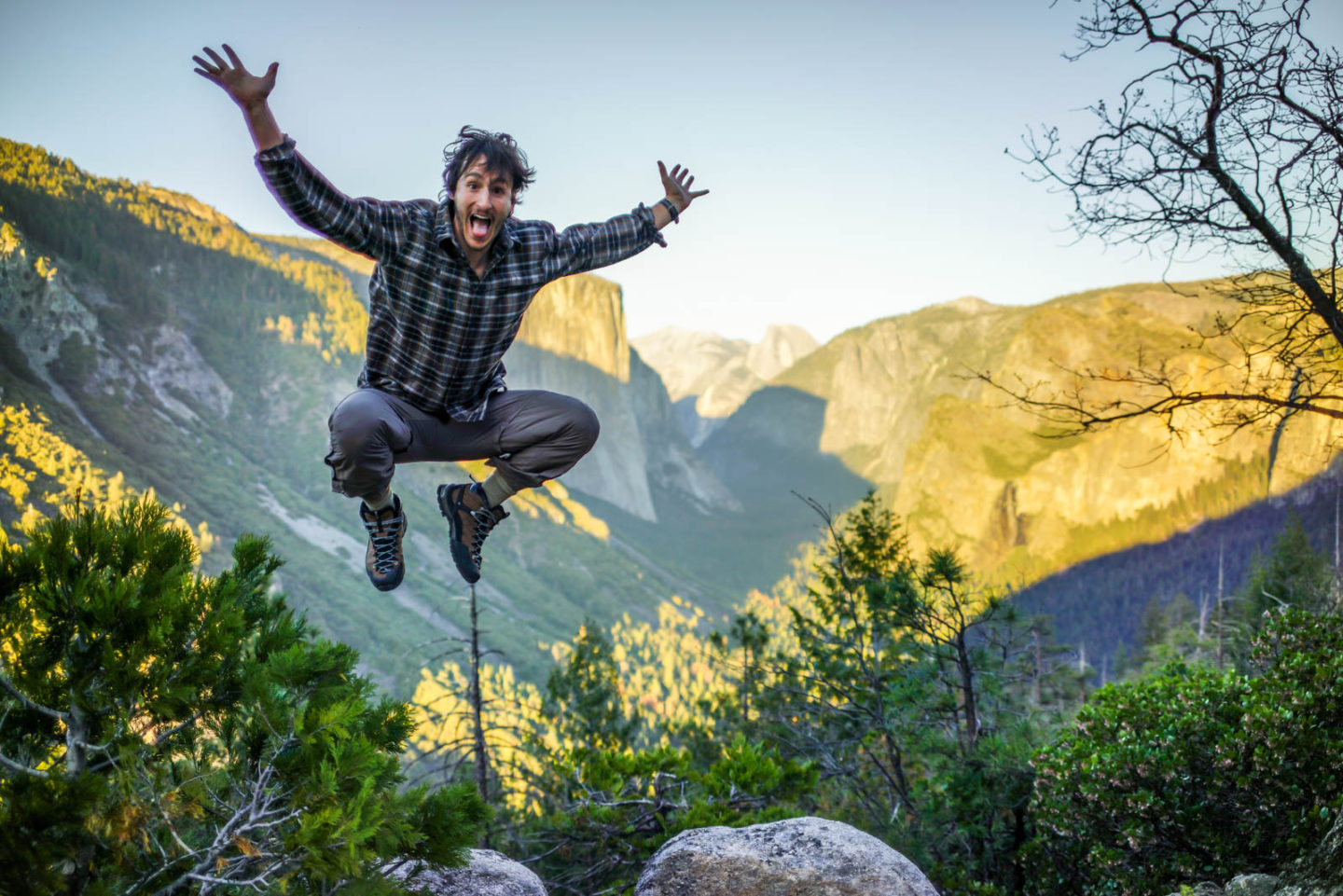 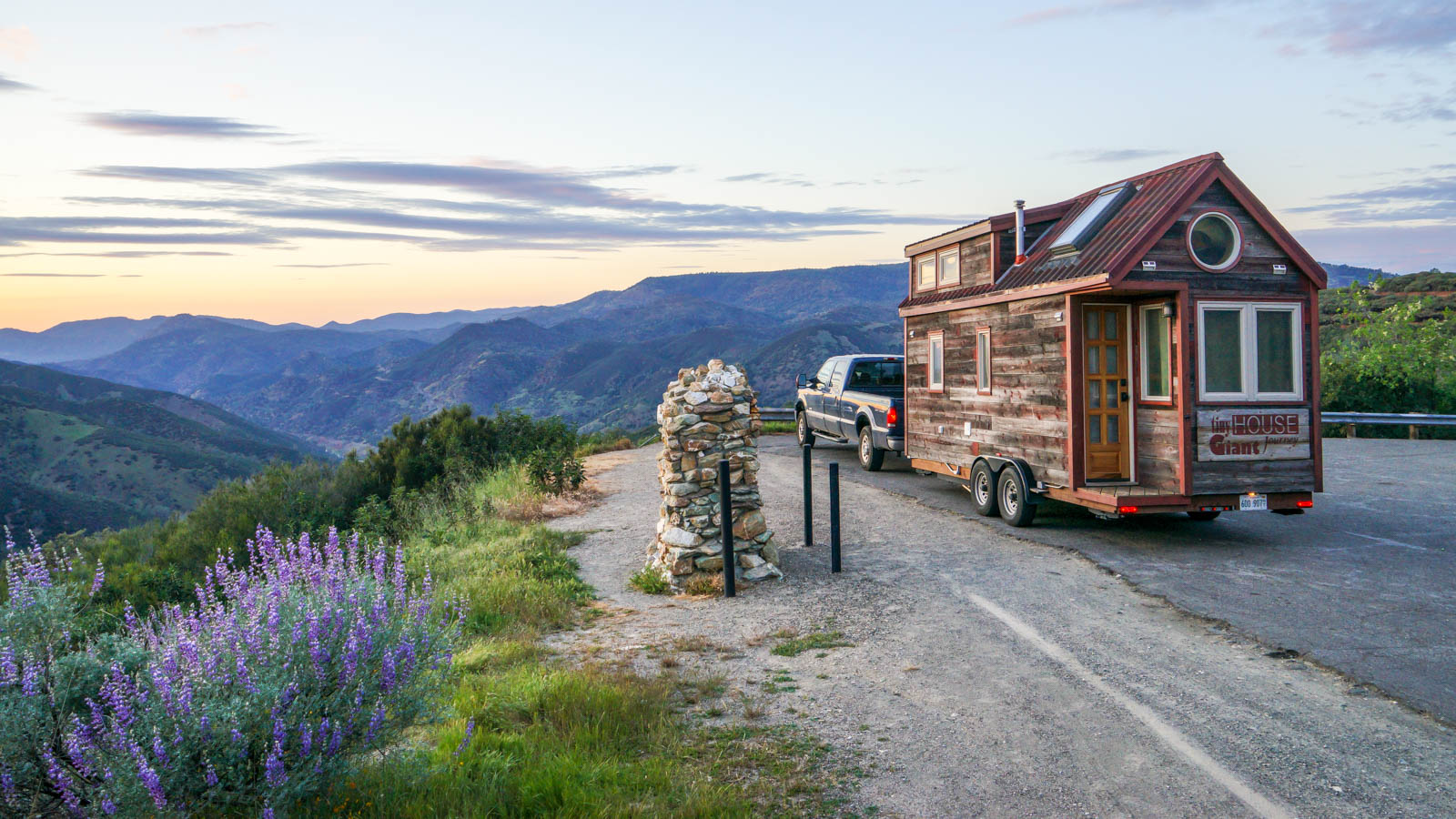 “Yosemite Valley, to me, is always a sunrise, a glitter of green and golden wonder in a vast edifice of stone and space.” – Ansel Adams

I lived in California for seven years, yet I have never been to Yosemite National Park. I think I was saving my visit for a special occasion. What could be more special than our tiny house adventure? It was time for me to hide in the shadow of a granite giant; Time for me to bask in the sunshine on top of a waterfall. It was time, to visit Yosemite.

We settled our tiny house into a lovely creekside spot at Yosemite Lakes RV Resort, an hour drive from the valley. This was one of the nicest campsites we’ve stayed at yet. Click here for more on Tiny House Camping in the USA.

On our first full day in Yosemite, we hiked to the top of Vernal and Nevada waterfalls. The total hike via the Mist Trail is a 5.4 miles round trip, but Guillaume and I took the Mist Trail up and the John Muir trail down making it a 7 mile round trip hike with a 2000 foot elevation gain. It took us five hours total, including a stop for lunch.

The first portion of the trail leading to the Vernal Fall Footbridge is paved and features an excellent view of Vernal Falls from the bridge. Afterwards the trail alternates between dirt and rock and ascends adjacent to the rapid waterfall.

The most challenging (but perhaps the most unique) aspect of the Mist Trail is the final steep rock staircase leading to the top of Vernal Falls. As I climbed the steps, the falls showered my skin with a fine mist. In one section, the path narrowed dramatically, and I found myself wedged between a bluff and a dangerous precipice fenced off by a net bannister. I clutched the net with my left hand and held the rock wall with my right. Then I climbed, and climbed, and climbed.

Vernal Falls as seen from the Mist Trail

The next portion of the trail leading to the top of Nevada Falls was a series of switchbacks and an elevation gain of 1,000 feet. As I climbed around the back of the mountain, the white noise of the nearby falls became louder, and louder, until it drowned out any other sounds. Once at the top, Guillaume and I argued over which waterfall was more impressive: Vernal or Nevada. Vernal is wider and has a beautiful slick rock face. Nevada is taller, narrower and spits violently over a tall cliff. It’s a tough call.

John Muir Trail On our way down, the John Muir Trail offered a supreme vantage point of Nevada Falls, and our debate ended. Nevada Falls was voted, unanimously, as the more impressive waterfall. The trail continued as a series of switchbacks that zigzagged through a quiet forest. We enjoyed the seclusion on this trail as it isn’t as popular as the Mist Trail.

The following day, we decided to take Salies into the valley. We often struggle as dog owners, especially when we visit a National Park. Most of them have a strict “no dog rule” when it comes to trails. Poor Salies, she loves to hike. The only trail in Yosemite that is dog-friendly is the paved portion of the Yosemite Valley Loop. Yosemite Valley Loop The Yosemite Valley Loop is almost 12 miles long with zero elevation gain, but the portion that allows dogs is much shorter. We strolled around the valley for four hours, while Guillaume snapped photos and we enjoyed scenic views of El Capitan, Yosemite Falls, Bridalveil Fall, Half Dome and several other famous granite giants. The downside: it’s very touristy. Yosemite Falls was so congested it felt like we were back in Disney World! The upside: it’s a great option for anyone who is unable to do the more strenuous hikes.

Half Dome from Valley Loop

Upper Yosemite Falls in the Background

Tunnel View No trip to Yosemite is complete without a trip to Tunnel View. In peak season, this overlook is so popular you might have to fight a tour bus for a good vista! Even with a crowd, the view is stunning and worth a stop.

Inspiration Point To evade the crowd, we hiked to Inspiration Point. In the olden days, visitors would endure a bumpy eight hour stagecoach ride to behold this overlook. Today, it’s a relatively easy hike from the Tunnel View parking lot! The trail is a 2.6 mile roundtrip trail with a 990 feet elevation gain. We ascended at sunset and came down after dark. If you plan on doing this, be sure to bring a headlamp. We had Inspiration Point all to ourselves, which was great because we like to act like idiots.

After three days and three nights, we reluctantly left Yosemite after only brushing the surface. There’s so much to see and do in North America and we have to keep moving! The next time we return to the valley I’d love to do a backpacking trip, but before that happens, we need to find a pet sitter… and perhaps, a tiny house sitter too. Next up: Tall trees and Jurassic Park… can you guess where? – Jenna