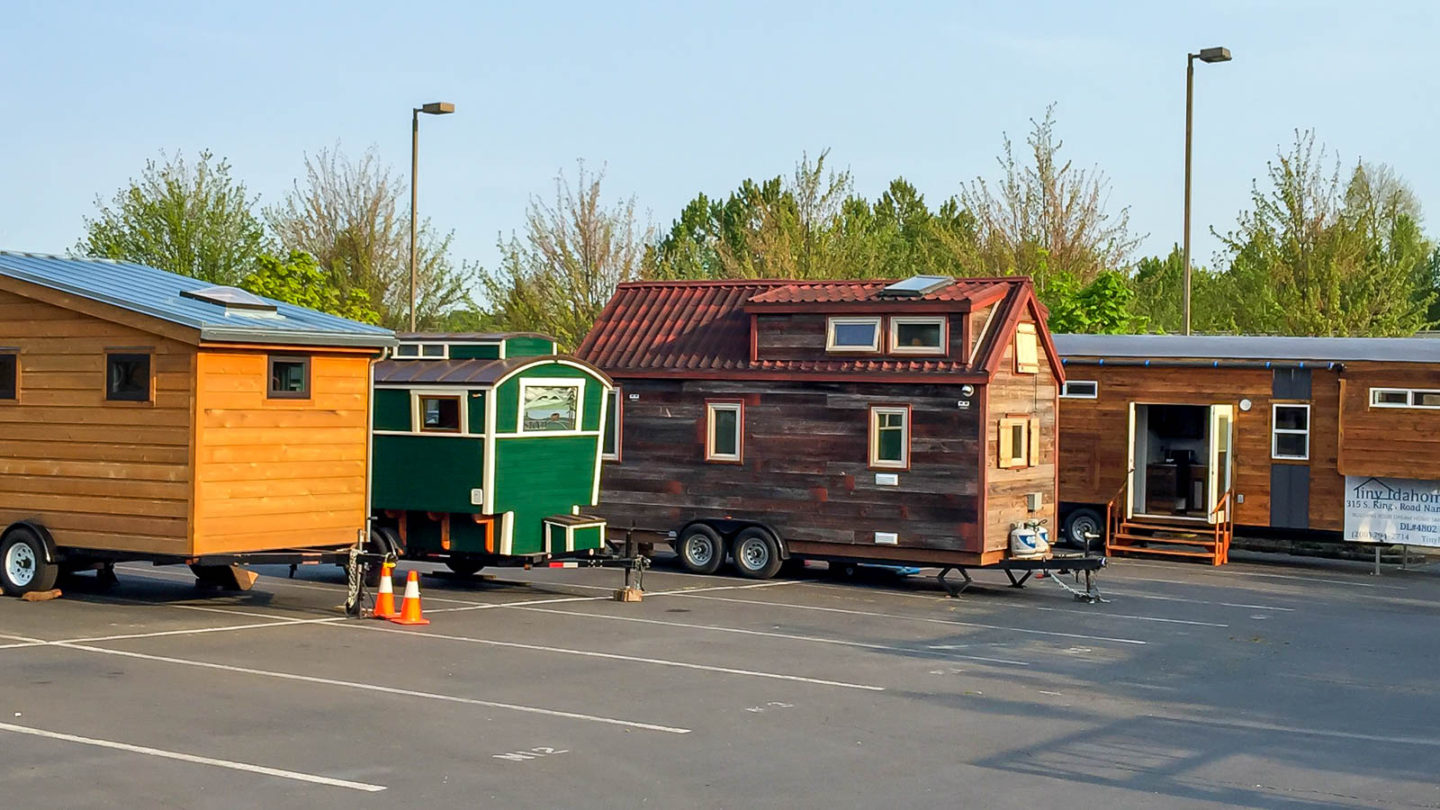 After our three day adventure up the Oregon Coast, we traveled to the land of coffee, beer and bikes. Portland is famous for many reasons: colorful donuts, looming volcanic mountains, hipsters-who-were-hipsters-before-it-was-a-thing, and, most importantly, for tiny homes.

Portland, is the mecca of tiny homes.

While in Portland, we attended the Tiny House Conference – an annual conference of tiny house owners and enthusiasts. This was the second year of the conference and about 400 tiny house nerds attended the event, us included. Our tiny home was showcased along with six other tiny dwellings, every one of them unique. The variety was spectacular! It was a lot of fun to chat with other builders about their passions and designs. Many of the “big names” in the movement were present including a few old friends we’ve interviewed on our YouTube channel: Laura and Matt from Life in 120 Square Feet and BA Norrgard from A Bed Over My Head.

I finally met Dee Williams, the unofficial mother of the movement! I read her book about a year ago, and she presented the first tiny house workshop Guillaume attended over two years ago. She’s an inspiration to many, but she’s also just one cool chick that enjoys beer and toilet humor (we have more in common than I knew).

Another highlight of the conference was that we had a chance to view the new tiny house documentary: Small Is Beautiful. The film brought forth all sorts of buried emotions from my build. A hot flash of embarrassment swept over my face when I recalled the time I threw a hammer across the loft in frustration, leaving a small crater in my floor boards. Moments later, another forgotten, tearful memory caught in my throat – the time expanding foam

behind my toilet, clogging it, because I forgot to cover the fitting.

A year ago, I screamed and cried and wanted to quit, because building a tiny house was too difficult. Today, as I watched the film, I chuckled at those memories.

Aside from the conference, we spent two weeks exploring the wonderful city of Portland. Here are a few highlights:

A few of my local friends somehow convinced me to go on a bike ride with a bunch of people we met on the internet, in the middle of the night, during what locals call a “light drizzle” but what any other person would call a downpour. Here’s the story. 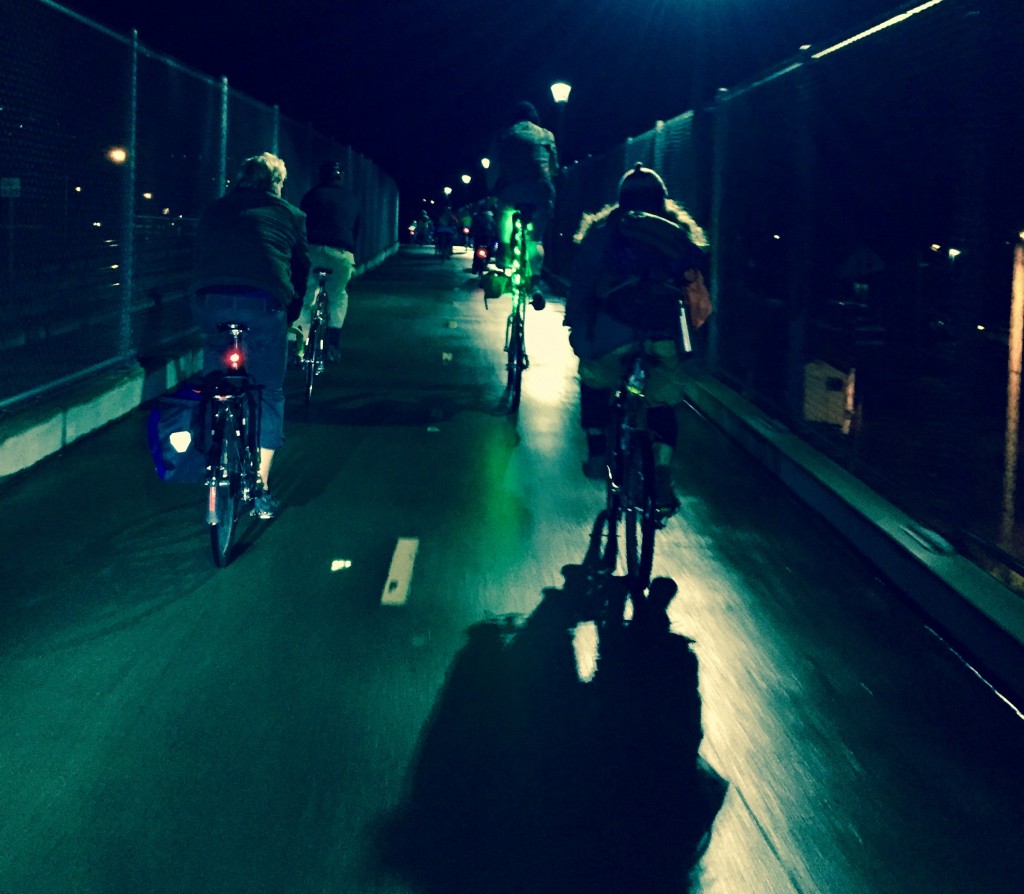 Midnight Mystery Ride is a thing, in Portland. Once a month, a group of bike enthusiasts meet up to cycle madly through the streets, the end point being a mystery location that only the “bike leader” knows about. Sometimes hundreds of people show up. So it would seem I joined a proper gang, one with a mantra: At midnight, we ride.

I haven’t avidly ridden a bike since before I had my driver’s license, so I was nervous. Perched on a borrowed bike, wearing borrowed rain gear, and aglow with borrowed safety lights, we met at a strange bar that was going out of business and oddly named: the New Copper Penny. The clock struck midnight and magically our bike leader appeared and beckoned us to jump on our bikes. It was time to ride. Fueled by my nerves and the midnight summons, I suddenly realized I had to pee. I ran to the bathroom, dropped the three layers of pants I’d worn for warmth and protection, and carefully hovered over the toilet seat to tinkle. My friends waited patiently, as the majority of the bike gang had already left us in the dust. Unfortunately, It wasn’t the last time they’d wait on me that evening. . .

“How do gears work again?!” I called to a friend, panting heavily. He explained the concept to me for the third time, and I changed gears until my feet were spinning twice as fast as everyone else’s. The relief I felt in my calves was palpable, but soon I was falling behind. All around me, my bike gang brothers and sisters were aglow with neon lights and whooping with glee, somehow ignoring the fat water droplets pelting their faces.

A short and, thankfully, relatively easy ride on a paved path brought us to our “mystery end point” – a dark wooded area where I could only assume we would sacrifice our weakest to the bike gods. Most likely me. Instead we started a small bonfire, despite the rain, and drank a few celebration beers. At some point during the wet ride home, my outer pant layer caught in my gears, ripped, and almost caused me to fall over. Luckily, my friend backtracked to rescue me from the bicycle’s deadly jaws. By the time I arrived home (around 3am) I had mascara streaked down my cheeks and battle wounds from my war with Portland’s precipitation. It didn’t matter. I threw myself into the loft and it was lights out.

At 5am, I woke to a charley horse in my right butt cheek. I screeched with pain and rubbed it until I drifted back into blissful sleep.

The next day, I limped around my tiny house with achy muscles, a right of passage for any bike gangster.

Did you know there’s over 30 miles of wooded hiking trails in downtown Portland? Guillaume and I considered trying to hike the entire Wildwood Trail in one day, which is possible, but we couldn’t make it work with our schedule. Instead, we hiked only a few miles, just enough time to forget we were actually in the middle of a city.

Salies had an amazing time getting dirty. She even rolled around in the mud a few times to prove her infatuation with nature. Only later did she realize her actions had consequences. 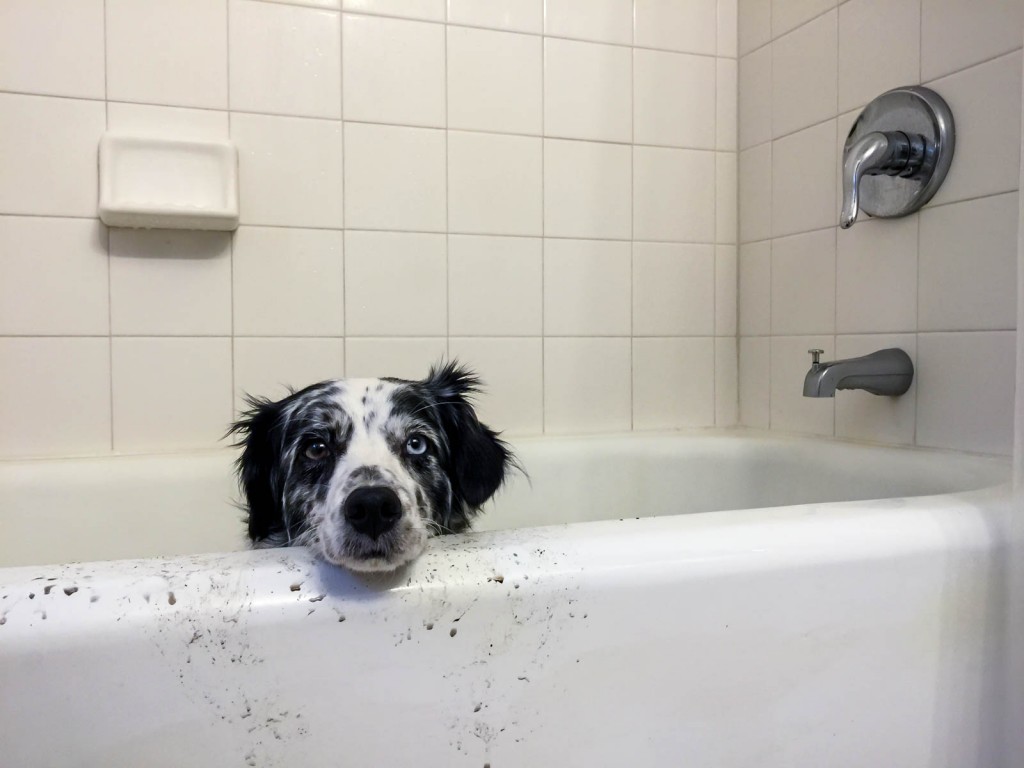 Everyone who travels to Portland needs to: 1). Have a beer at Rogue Brewery, 2). Buy a book at Powell’s and 3). Eat a crazy flavored Voodoo Doughnut.

Crossing these three essentials off of your Portland tourist checklist isn’t a city law, but it should be. We did all three in one day with the help of our local friend! So get a little tipsy, then get a sugar rush, then finish the day by browsing through Powell’s rare book section. But maybe wash your sticky doughnut fingers first.

The highest point in Oregon is just an hour drive from Portland and offers year round snowboarding and skiing! Guillaume and I store our snowboards on a ceiling rack in our tiny house, but so far on our trip we haven’t had the opportunity to use them. 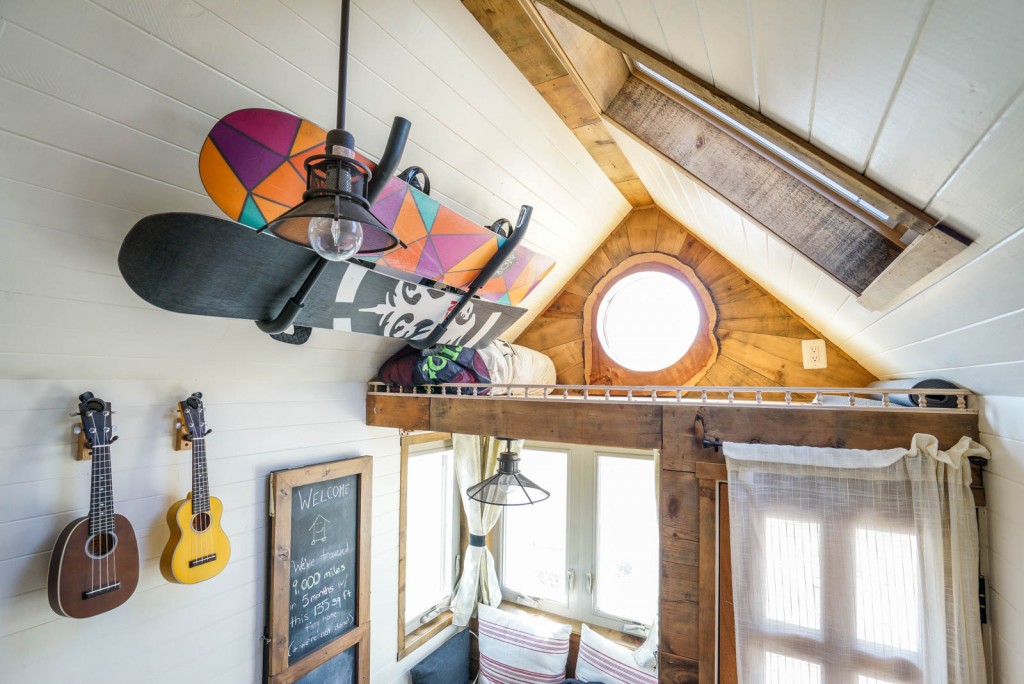 Lucky for us, Mt. Hood was blessed with a brief (and unseasonal) dump of powder during our visit. We took advantage! 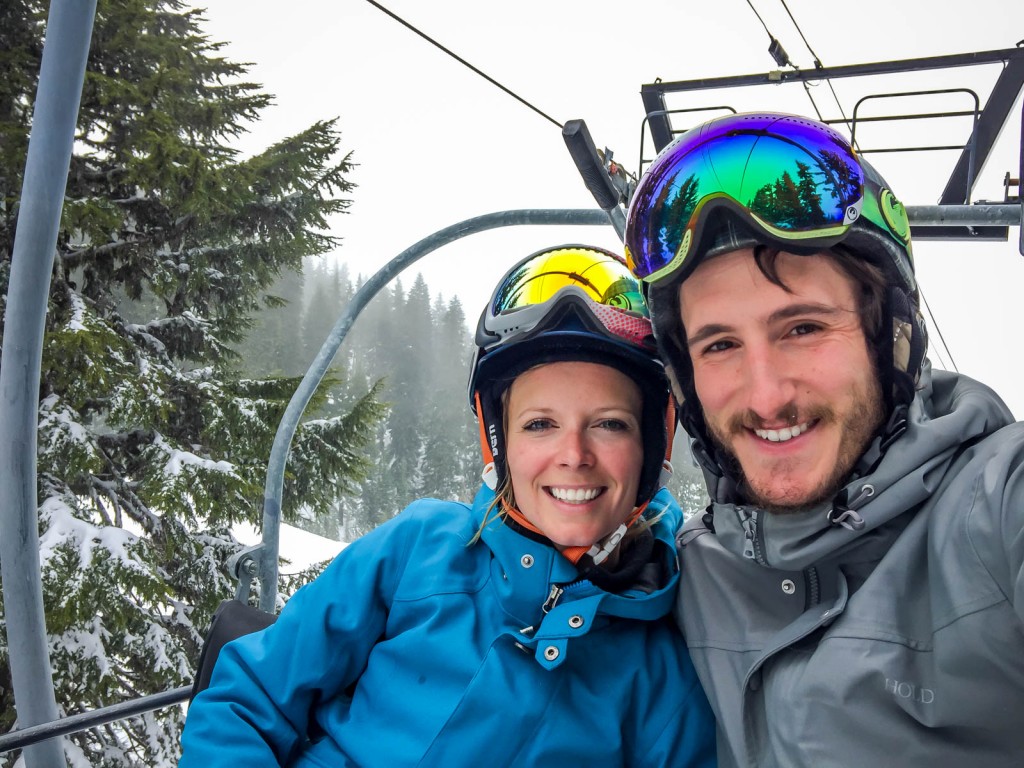 Next Up: Another Tiny Houser offered us a rare opportunity to “upsize” for a week!