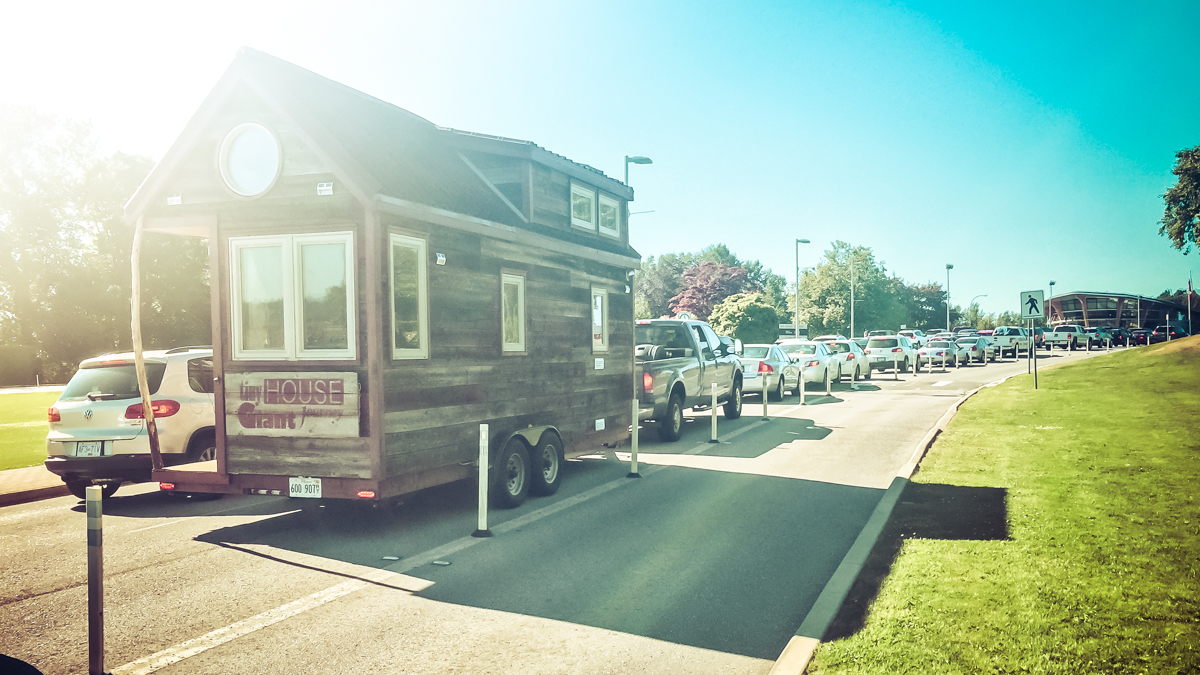 Our Tiny House was about to cross into Canada for the second time, and as you might remember the last time was a hilarious interrogation somewhat lost in French-Canadian translation. Guillaume and I figured crossing in an English speaking province would be much easier, but as usual we were wrong.

Is there anyone in the world less cheerful than a border police officer? In my experience, no matter which country I’m trying to enter – Costa Rica, France, Australia, Canada or even my own country, the first citizen that greets me, which is always a border police officer, is a miserable creature. This uncomfortable welcome seems to be a tradition for admittance into any country, for I’ve found the ritual cannot be enjoyed nor avoided. It’s sort of like walking through a dirty latrine before frolicking in a field of flowers. A horror followed by a delight. After being admitted, I always feel the need to dispose of the foulness I just encountered. But, perhaps the stinking latrine makes the flowers smell sweeter? This, I can not say for sure.

“What is your purpose of being in Canada?”

“How long will you be in Canada?”

“Do you have any fresh fruit or vegetables?”

“Are you bringing anyone in Canada a gift?”

“Will you be woking while you’re in Canada?”

The border police officer broke her monotone rattling just long enough to shoot an admiring glance back at our tiny house. An offense that I am sure is punishable by death.

“You’re going to need to pull over for inspection,” she ordered with a slight apology in her tone. We expected this, but what we didn’t expect was to wait in a sterile room while another officer rummaged through our house with a drug detecting German Shepherd.

Although I knew we had no contraband, I still fidgeted in my plastic chair. Nearby I could hear an officer scolding another young couple for their “filthy vehicle,” one that she had to swim through to find a bottle of long forgotten pepper spray. I began to sweat. Is our house filthy? Sometimes our belongings fall from their secured shelves and I would open the door to a pandemonium of canned goods rolling around the floor. Once the dog food fell over and somehow unfurled itself… I still occasionally find pieces of kibble. Most of the time my house is orderly, but I didn’t have a chance to check it before the inspection. Were my underwear still hanging to dry in the bathroom?!?! Oh god. I reddened and shuttered in discomfort.

“Alan?” A dark complected officer called. Guillaume and I looked at each other, confused. There was no one else waiting, but “Alan” is Guillaume’s middle name. The officer waved us over and it was obvious he didn’t have the slightest idea how to pronounce Guillaume’s name, which is odd because it’s a very common French name and this was Canada.

“You’re good to go,” he recited blandly. I studied him for an emotional response to our tiny house. Did you see my ugly quick-dry underwear? I wondered. I crossed Europe with those underwear after an REI associate convinced me I could backpack for a month with only one pair of panties, as long as I washed them every time I took a shower. He promised the innovative undergarment would dry in ten minutes, and this was usually true. I was thinking about how intelligent I was for purchasing those underwear when the officer broke my daze –

“That’s a pretty cool little house you have,” he chirped.“The nicest RV I’ve ever seen.” Then he muttered to himself: “Never thought I’d search a HOUSE on this job.”

Guillaume and I beamed with pride, strutted out into the sunshine, approached our palatial home (which was being photographed by a few officers), and happily drove toward the field of flowers – which in this case was British Columbia.

Later we found our house was in slight disarray from the search. I don’t know why I was concerned with my hanging underwear when the officer dug through my ottomans and clothing drawers. I felt slightly exposed, like when you received a notice of inspection in your luggage, but the feeling didn’t last long. What do I care? After all, I just wrote an article about my underwear.