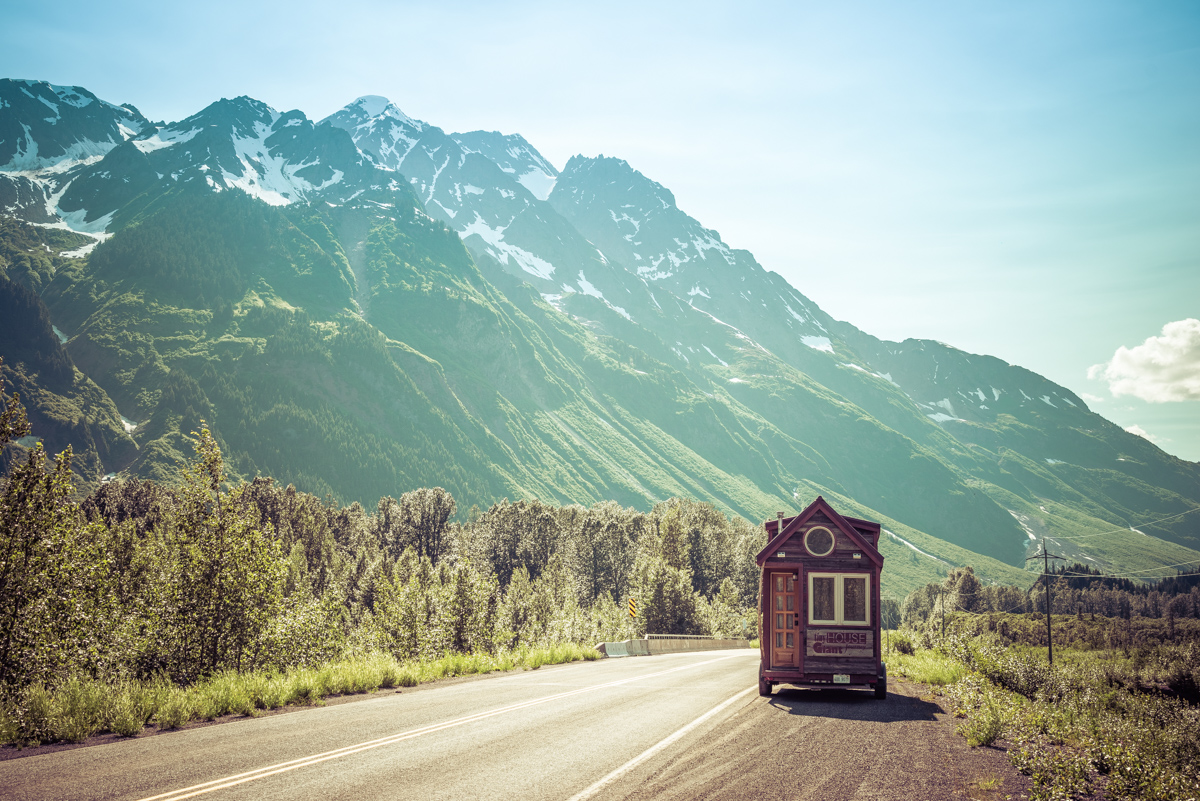 The Stewart-Cassiar Highway is a paved but rural 543 mile highway that runs north and south along the interior of British Columbia. It is often considered the more rugged alternative to the more popular Alaska Highway. The towns bordering the highway have populations of less than 300 permanent residents, so there are probably more bears in residency along the highway than people! Rest stops and gas stations are readily available at reasonable intervals but locals suggest carrying a gas can for emergencies.

We were told that wildlife is abundant on Highway 37, and oh boy, they weren’t kidding! We saw ten black bears on this highway and most of them were crossing the road. A few were mothers with small cubs, so we were careful to keep our distance. Moose, bald eagles and other majestic northern animals also live around the Stewart/Cassiar highway, so although the area offers excellent wildlife watching it’s also dangerous for careless drivers.

The detour to Salmon Glacier from the Stewart/Cassier Highway is about 120 miles round trip, but absolutely worth it! In order to get to Salmon Glacier you have to pass through the tiny town of Stewart, BC, into the even tinier town of Hyder, Alaska, and then swoop back in rural Canada before being smacked in the face with the gorgeous glacier! This means you’ll be weaving in and out of Canada and the United States, but don’t worry, you’ll only be stopped by the border police as you return to British Columbia after visiting the glacier. No one checks your passport as you enter Hyder, Alaska (a town with a population of 87 residents), which means it’s probably the only place in the United States that you can enter without the threat of a full cavity search. 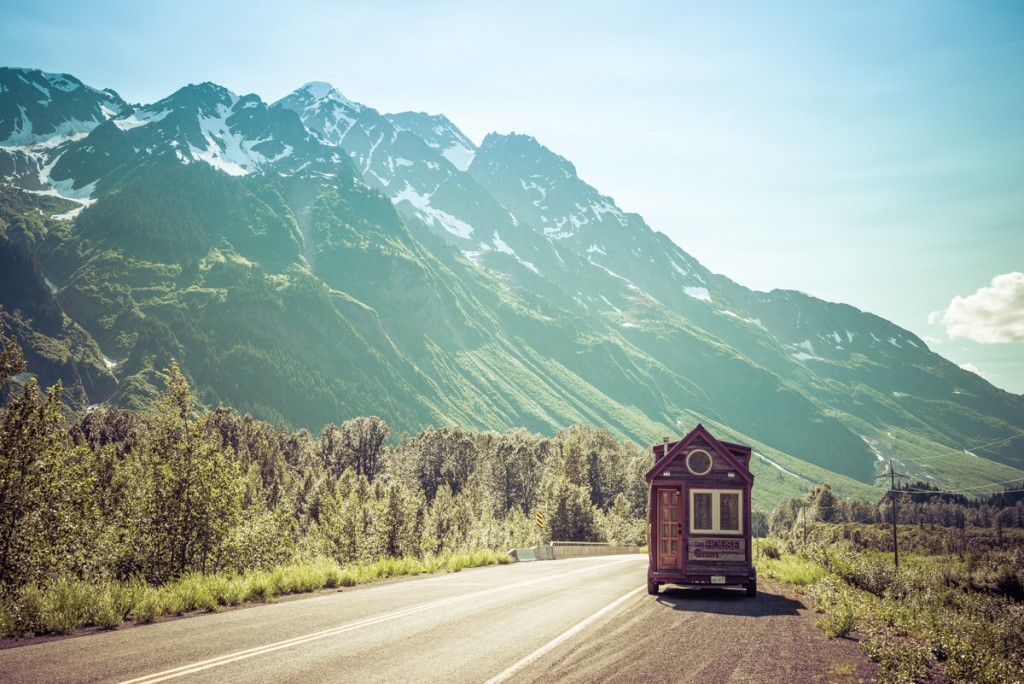 As you travel down Highway 37A towards Stewart, you’ll pass Bear Glacier: a spectacular blue giant perched a few hundred meters from the road. Believe it or not, this glacier is only a fraction of its former self.  50 years ago, the highway and our tiny house would have been buried in Bear Glacier’s icy underbelly in the picture below!

Stewart is a quaint British Columbian town with a few restaurants, a grocery store, visitor center and an estuary boardwalk (a great stroll for bird watching). As you leave Stewart and enter Hyder you’ll be greeted by a small frontier tourist shop – stop in to try some homemade fudge. Yum! It’s a long bumpy ride to Salmon Glacier, but on the way there are a few stop offs. The most popular pull off is Fish Creek Wildlife Observatory where you can see bears feeding on spawning salmon in the late summer. Unfortunately, we arrived in early summer, so no salmon or bears were present.

Salmon Glacier is a angelic swirl of vanilla ice cream sprinkled with pools of blue gatorade. I’m sorry, I don’t know how else to describe it! The strange celestial beauty emits an “other-worldly” aura, as all glaciers do. As I stood in front of the brisk beast, I could feel cold breath prickling my skin. Glaciers make you feels small, insignificant, awestruck and… a little bit guilty. These colossus beauties used to be much much larger and perhaps carbon emissions are to blame. Will these ghostly behemoths return one day and cover the earth? Will they dry up and disappear? I’m not here to start an environmental debate, but I will say: Both scenarios scare the crap out of me. 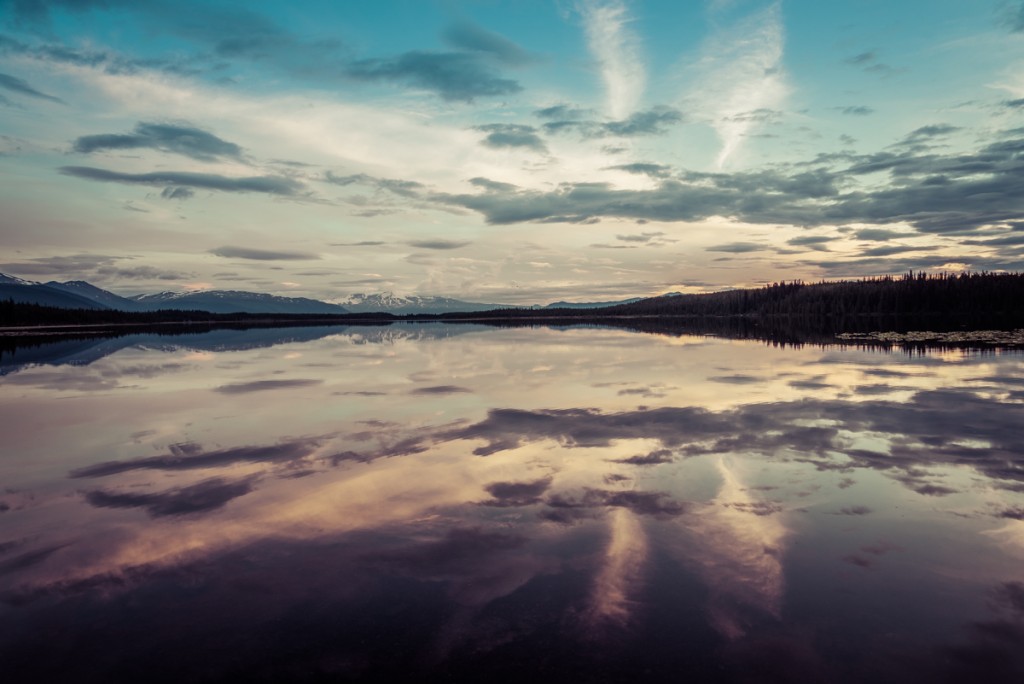 This highlight is more of a suggestion for a picturesque free camping location. The Morchuea Recreational Site is easily accessible from the Stewart/Cassiar Highway and the view of the lake is unbeatable. The volcano, Mt. Edziza, poses handsomely in the distance and a small boat ramp offers recreation for anyone with a canoe or kayak. For more information on camping with a tiny house in British Columbia, click here.

Our campsite at Morchuea Lake 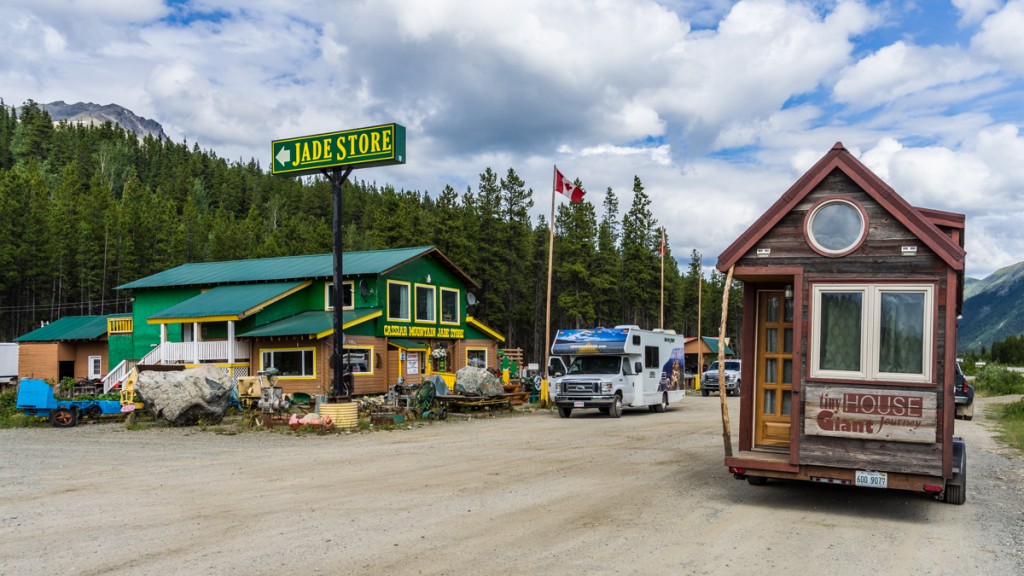 Did you know that about 90% of the jade in the world comes from Cassiar Mountain? Most of it is exported to China, but the large shop called “Jade City” offers a variety of  jewelry and keepsakes for purchase. Talk about quirky! Jade City (the shop; it’s not really a city) is owned and operated by a jade mining family. Observe the hardy machinery on display that they use for mining, cutting and polishing the precious stones. As a bonus, the shop offers free coffee, wifi and RV parking for travelers.

Our Next Highway Navigation: KLONDIKE HIGHWAY