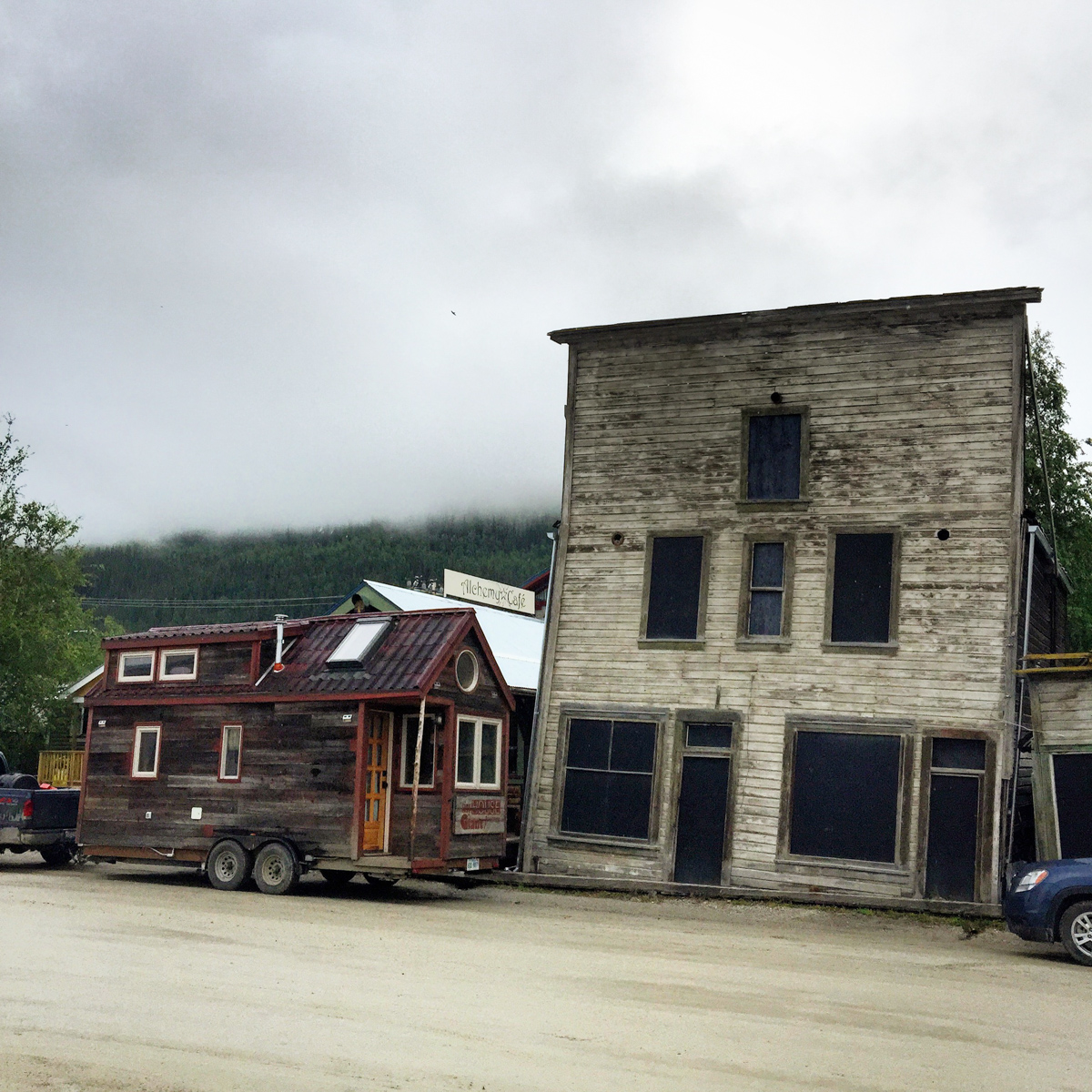 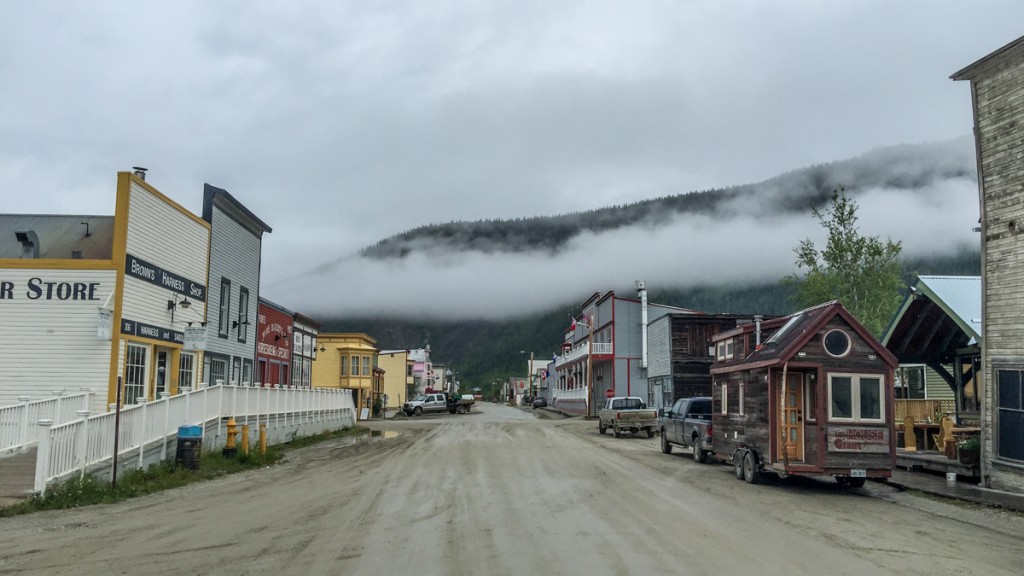 Dawson City was birthed during the exciting few years of the Klondike Gold Rush, when thousands of prospectors migrated to the area. The locals are proud of their heritage and work hard to preserve it. Many of the century-old buildings in downtown Dawson have been protected and look authentic and dilapidated, while others have fabricated store fronts that pale in comparison to the originals. The sidewalks are made from wooden planks, the roads of dirt, and the cuisine of fish and liquor. All of these ingredients mix together to create a charming city, even if it’s a muddy mess when it rains! 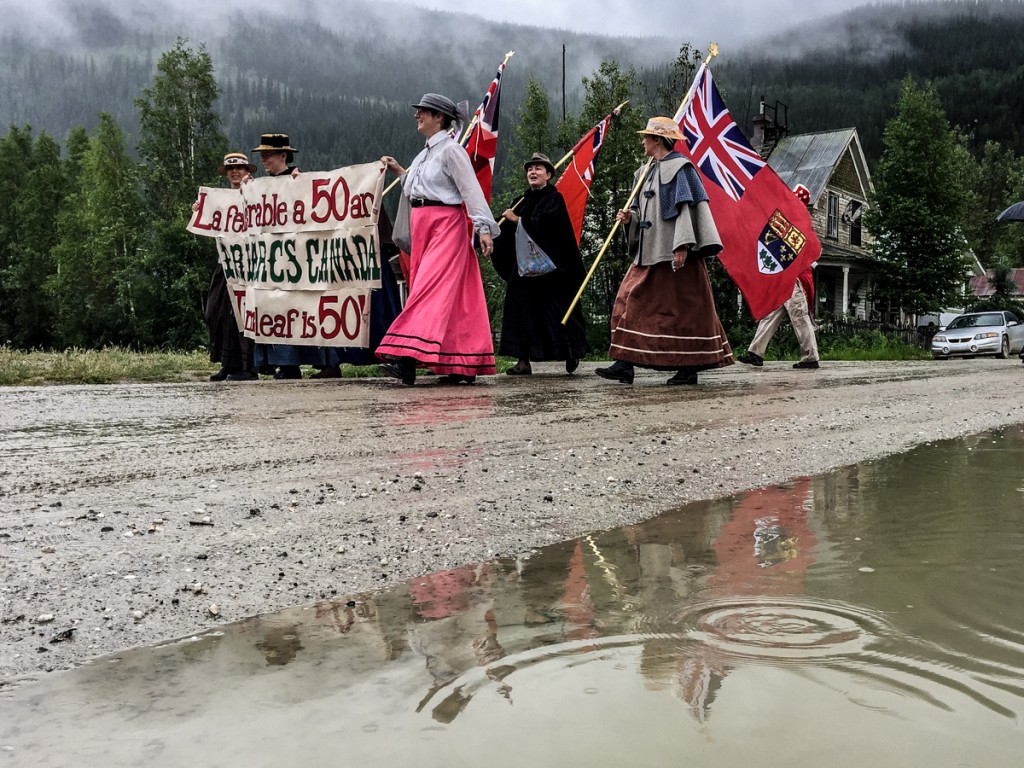 We arrived in Dawson City on Canada Day. The little town holds a few events for the holiday, but sadly the rainy weather really dampened those plans (pun intended). Guillaume and I made the effort to watch the parade, despite the downpour. Kids road their decorated bicycles through the mud; a band played music in the back of truck, cradled under the weakening shelter of a flapping tarp; and Dawson City’s fleet of fire trucks sounded their bellowing horns. The parade marched through the entire town in about thirty minutes and then the streets went quiet.

I was fairly depressed after that spectacle. It’s not fair that their well thought out holiday was hindered by rain, but the local folks are used it. They party on through the rain and mud, shrugging off the harsh weather as if it’s nothing. One woman told us how she packs a sleeping bag for her kids on the school bus in the winter, when the temperature can get below -40F.

“They hate me for it, of course.” She chuckled, “It’s not cool to be the kid with a sleeping bag. But if that bus broke down and the heater went out, they’d be thankful.”

Fun Fact: Many Dawson residents live across the Yukon River, completely off the grid. This means relying on generators in the winter and green energy in the summer. The soil in the Yukon is not fit for growing plants, so composting to make your own dirt is a way of life for gardeners. Many residents go the extra mile to live off the land. Fishing, hunting and growing vegetables in the summer allows locals to save on food costs (which are much higher in the north). 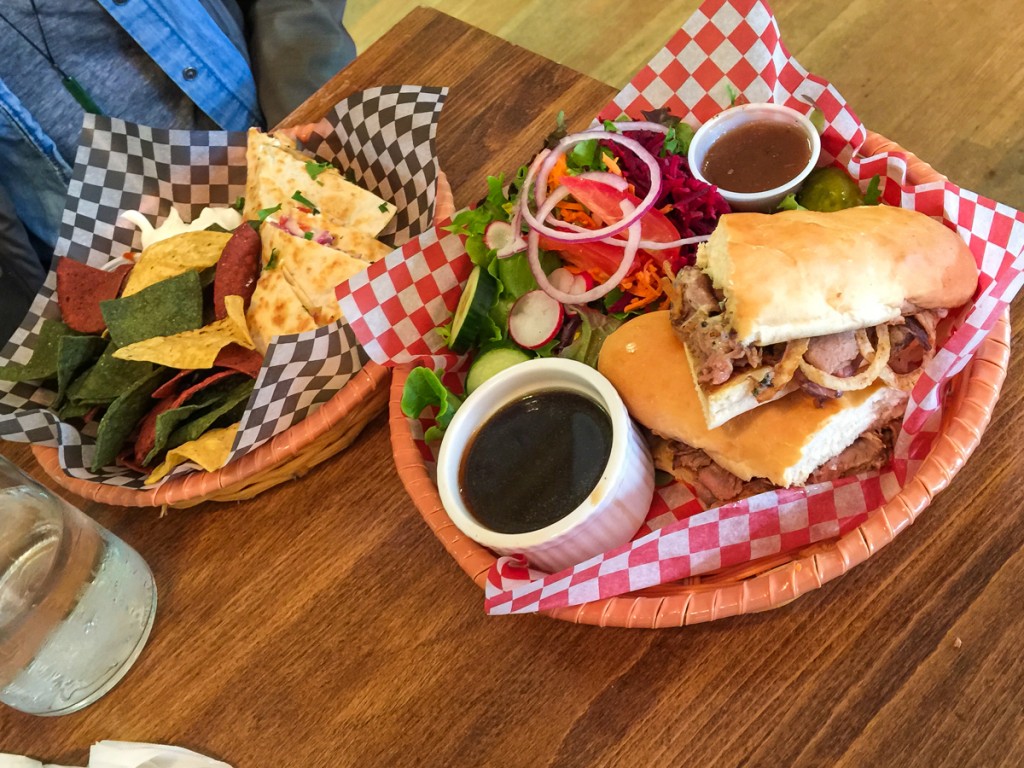 There are a surprising amount of eclectic choices in such a small rural city. I have three recommendations for your tummy:

Casual atmosphere. We loved the fried salmon and chips, as well as the homemade chowder.

Great atmosphere, good coffee and fresh ingredients. We parked out front and had an impromptu open house. Try the panini! Breakfast / lunch only.

One local told us that drinking is “a sport” in Dawson City, and I believe it. With just over 1,300 year round residents, I suspect you’d have to be a drinker to get through Dawson’s brutal winters. I have three recommendations for you:

1). For the Tourist : Diamond Tooth Gerties

This casino is a staple in Dawson City. Normally I would stay away from casinos and tourist gimmicks, but Gertie’s is actually a lot of fun. Antlers are mounted all over the walls. A large stage serves as a focal point with a red velvet curtain, live band and balcony seating. The bar has a variety of local beers available for a decent price – beer from the Yukon is usually expensive and/or hard to find.

The big spectacle is the can-can show, which is performed three times a night. The can-can girls were athletic enough that I forgot I shouldn’t be applauding young women for lifting their skirts and shaking their bums in my direction. I silently wondered if this is why they went to ballet school as I cheered with the rest of the crowd. When in Rome…

2). For a Conversationalist : Bombay Peggy’s Pub

Bombay Peggy’s used to be a brothel but now it’s a small socialite pub with specialty martinis. It also seems to be the local hotspot for people in their late 20s and 30s. A great place to stop in for a drink and conversation. 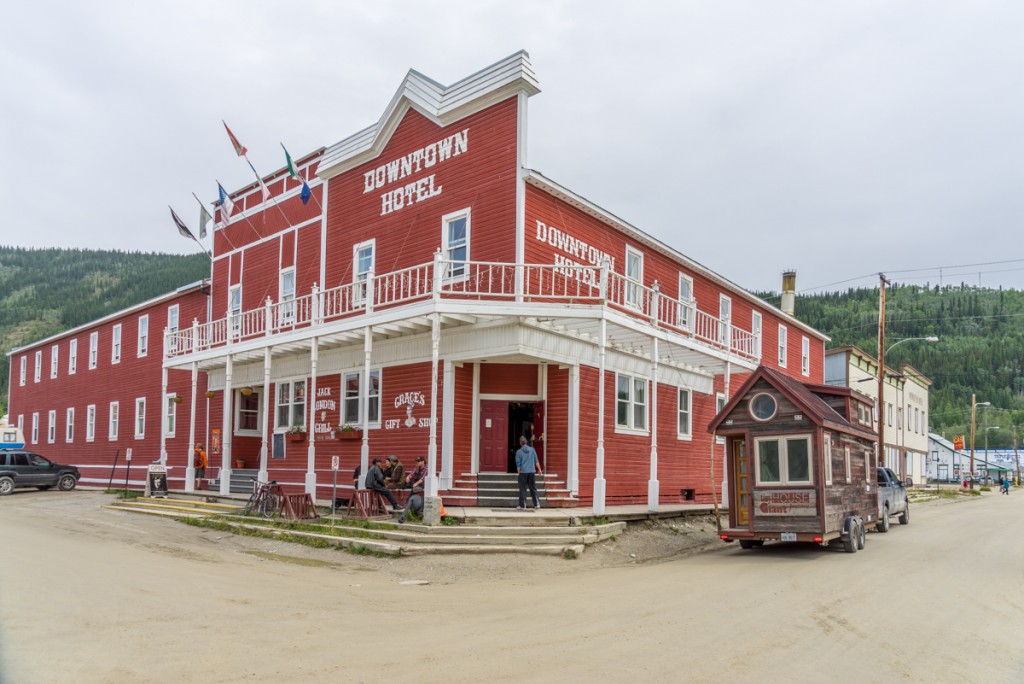 The Downtown Hotel Bar has a musty smell, probably from decades of cigarette smoke embedded in the wallpaper, but it could also be from the amputated human toe they keep for their famous “Sour Toe Cocktail.” Dare-devils line up at the hotel’s Sourdough Saloon to drop the black stinking toe into their shot glass. This right of passage allows them to join the ranks of other idiots… ahem, I mean rebels, who have tried the cocktail.

Guillaume was one of them.

The lady in charge of the Sour Toe Cocktail recited a practiced speech with a raspy voice:

But at the end of the day,

Your lips have got to touch that nasty toe.”

When Guillaume asked her where the toe came from she said: “A foot.” She also mentioned that they’ll be getting another toe in the next few weeks because this one is getting “a bit maggoty.” After one of her disciples finished their Sour Toe Cocktail she asked: “Care for the drippings?” And squeezed the remaining toe juice into the glass. Needless to say, I liked the Sourdough Saloon’s classic crone. She had spirit.

Next Up: Independence day in Chicken AK (population 15)