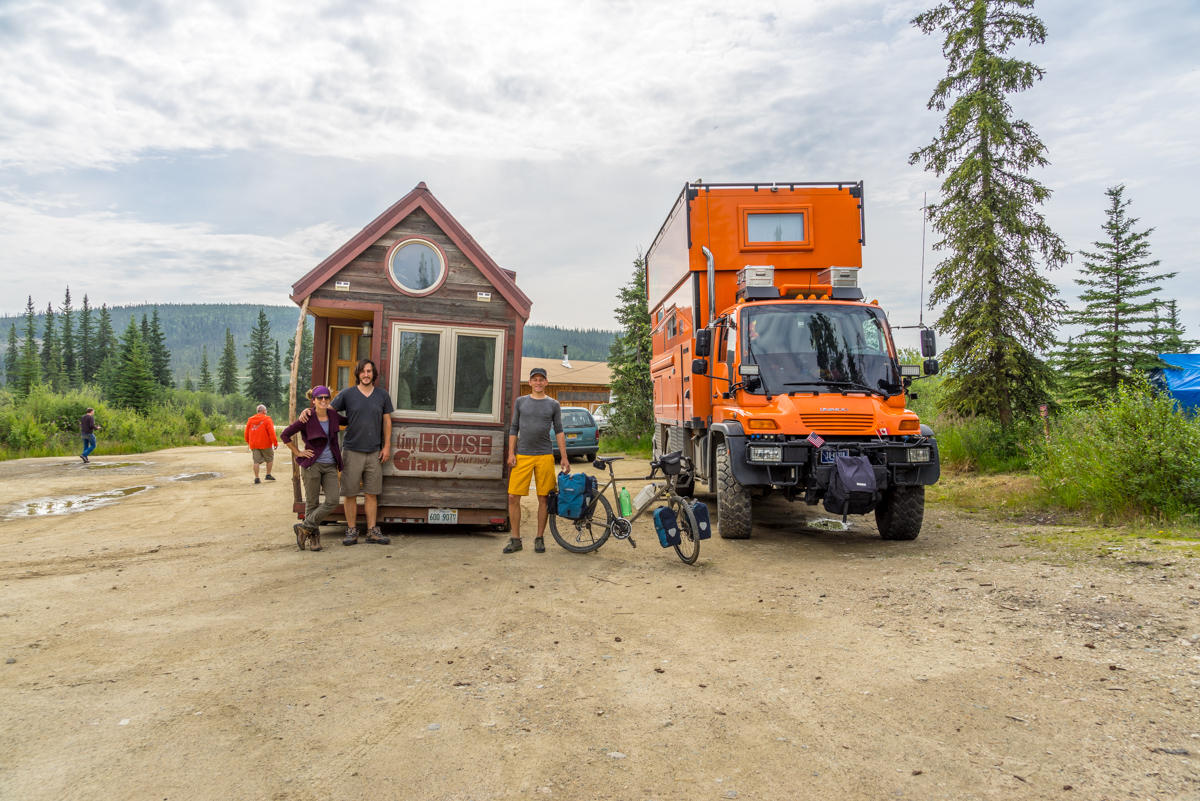 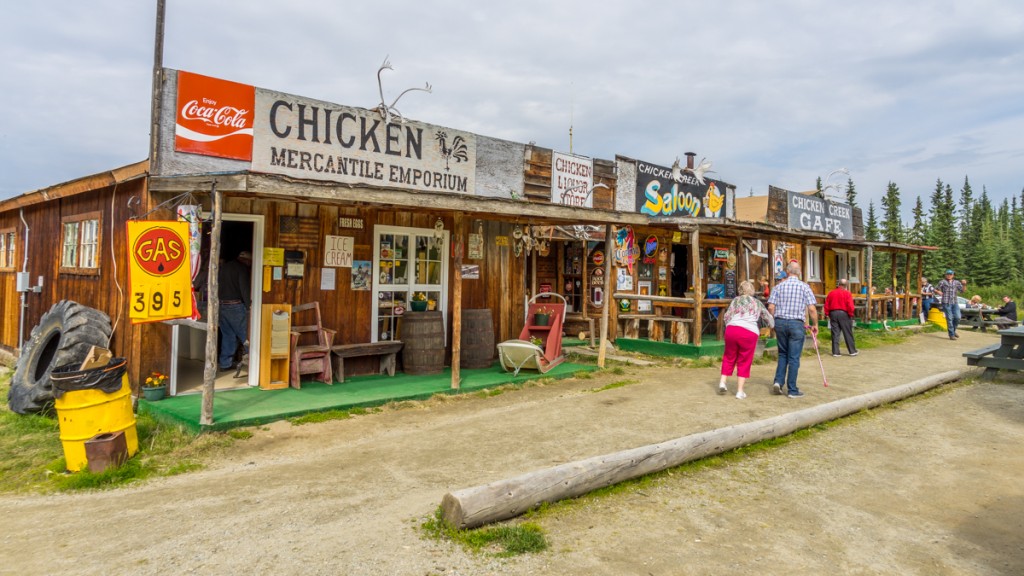 Have you ever been somewhere and thought: “There is no other place like this on the planet?” Perhaps you’ve witnessed exquisite beauty: the sun, the moon and earth align in a way that happens once in a million years. Or maybe you’ve been thrilled by culture: astounding architecture, a charming community and their odd customs. Or, you’ve experienced something powerful; a hot poker stabs you through the stomach and burns through your entire body.

Chicken Alaska isn’t beautiful. The small community has quirkiness, but the culture is so reliant on tourists, it cannot stand alone. Nothing warmed my stomach in Chicken, besides a tasty salmon burger. Still, I had the special feeling. Chicken is like no place on earth.

I credit this feeling to some supernatural entity summoning wanderers, eccentrics and dreamers to the dusty parking in Downtown Chicken. A magnet for the nomadic soul. We felt the pull and arrived on Independence Day.

Why is Chicken Unique?

Chicken was settled in the 1800s and named after a local bird that was a favorite meal for the miners. The bird is actually called “Ptarmigan,” but the miners couldn’t pronounce or spell the word, so they decided “Chicken” was a more suitable town name. Today, a total of 17 people live in Chicken year round. An enormous retired dredge looms over the town like a statuesque hero basking in its former glory. Visitors use the public toilet, a non-apologetic outhouse named the “Chicken Poop.” The local bar has a crooked floor and can only fit twenty people, shoulder to shoulder. The bar ceiling is decorated with burnt panties.

In conclusion, it’s a strange place.

“Why are there shredded underwear on the ceiling?” I asked the bartender.

He replied without blinking: “If you donate a pair, you’ll find out.” 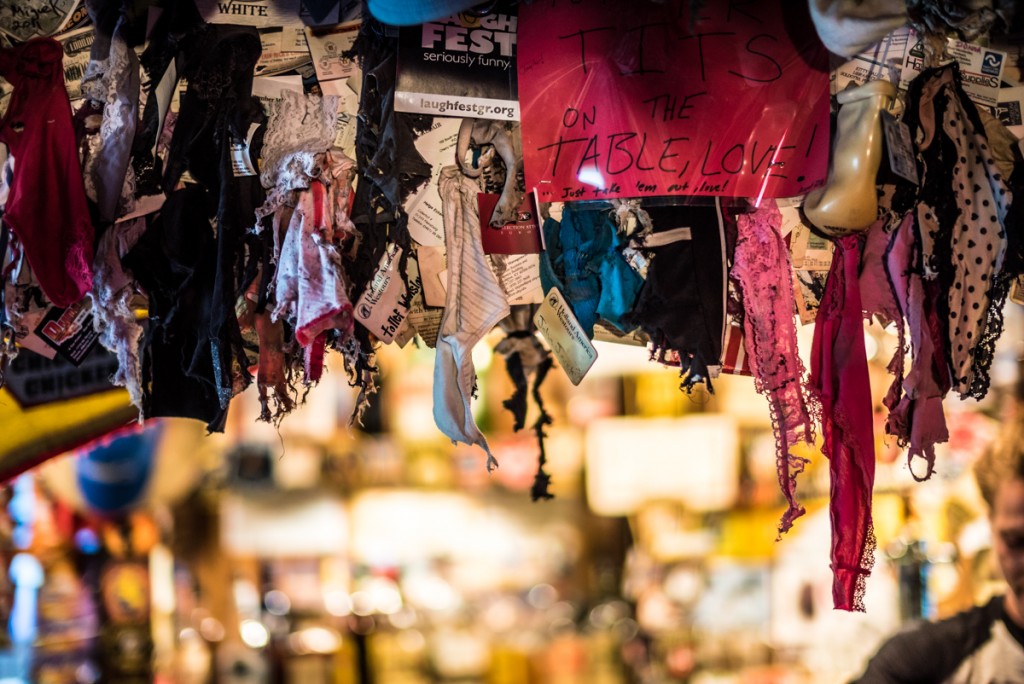 I live in a tiny house. And, embarrassingly enough, I’ve discussed my underwear before on this blog. I can’t burn my panties for entertainment; I don’t have a pair to waste! Luckily, one of our traveling friends donated her underpants to the cause.

A ridiculously tiny cannon roared and a pair of pink lace panties exploded into the air. It’s Chicken Alaska’s famous panty cannon, and tourists come from all over to shoot their undergarments into the air. The owner proudly stapled the shredded remnants to the bar ceiling.

Another One Bites the Dust!

Parked in the free camping parking lot behind Downtown Chicken, we met a variety of nomadic dreamers. Why did we all arrive in this seemingly insignificant town at the same time? Perhaps Chicken’s tiny Independence Day celebration deserves the credit. I prefer to think it was a full moon, but I can’t prove it because the sky hasn’t darkened over Tiny House Giant Journey in a month!

Allow us the fellow wanderers we met in Chicken:

– The German Expedition. Leo and Rita have traveled all over the world in their expedition vehicle with no schedule. They’ve even been to the Sahara Desert. Follow their adventures here.

The afternoon started with a family picnic. The barbecue smelled amazing, but it was a little expensive for us – $25 per person. We ended up cooking a cheap meal back at the Tiny House. Guillaume found one event irresistible: the “Win a Gun” raffle. Yes… you can win a gun in Chicken Alaska. Guillaume threw $20 in the pot and was given a raffle ticket – no questions asked. Morally speaking, we don’t want a gun in the tiny house (see our article “Do You Have Any Guns”), but Guillaume bought in for the experience, probably so he could tell his european friends and family about it later.  A gun raffle, at a family picnic, on Independence Day? Many cultures would consider this ludicrous. In some parts of the USA, we raffle guns and ask: “Do you want fries with that?” 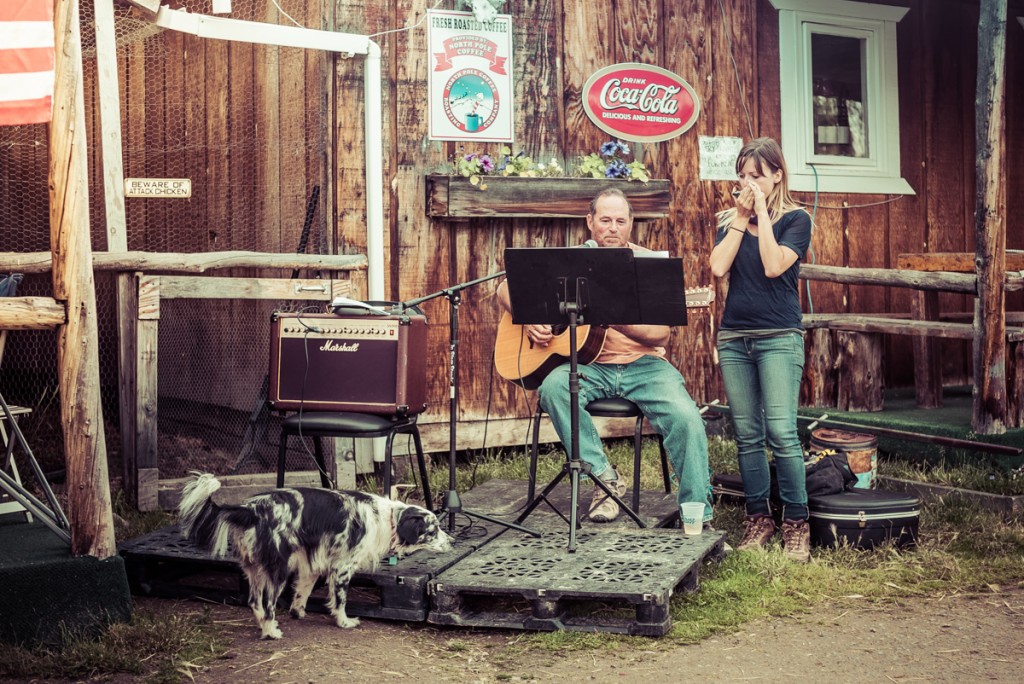 Later that evening, a guitar player strummed and sang outside the bar in Downtown Chicken. Cannons fired undergarments and people began to sing karaoke. I played a harmonica accompaniment for a few songs, and then refused to continue after having too many drinks. The crowd of about fifty souls was a melange of people from all walks of life. Some were Canadians coming over the border to celebrate, just as I celebrated Canada Day a few days prior.

I thought of my family back in Illinois and started missing our Independence Day celebration. I’m the elusive cousin, often missing in action. Most years I don’t make it home for Christmas, let alone July 4th. I’m sure they are used to my absence, which is a sad confirmation I’ve learned to accept.

The road walked by the wanderlust,

Is sometimes lonesome and often lost.

A price all wanderers choose to pay

To find themselves along the way.

– Scribbled on a napkin, while lost in Alaska