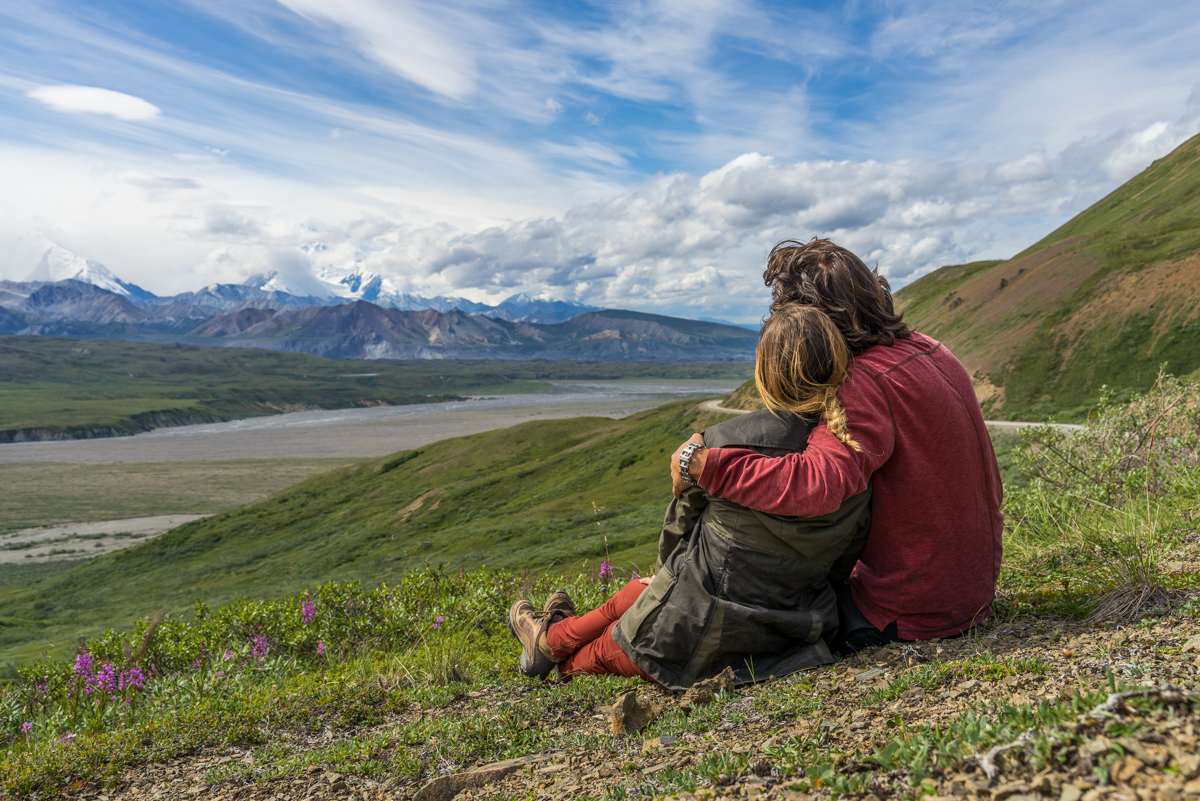 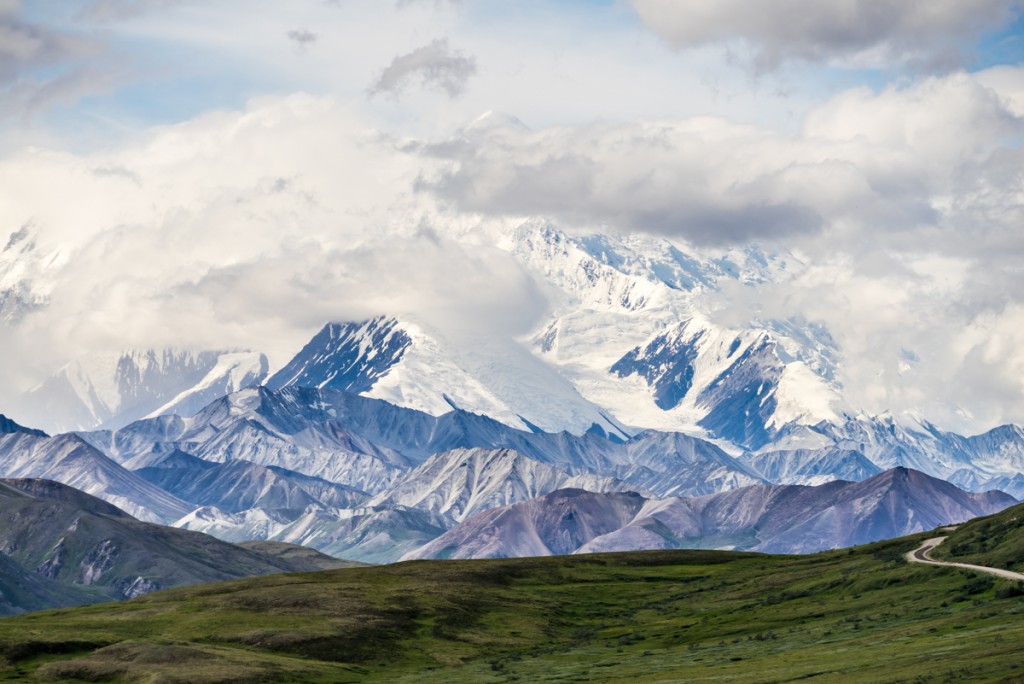 Although locals call the mountain by the original native name: “Denali,” many tourists know it as Mt. McKinley. Denali (translation: “The Great One”) is the highest peak in North America at 20,237 feet, and the third most prominent mountain in the world. Denali is also the tallest summit in the world (on land), even taller than Everest, because its base-to-peak elevation is greater. In fact, one Denali ranger told us that people climb Everest to train for Denali!

Guillaume and I rolled into Denali National Park during their busy season without a campground reservation, like idiots. There is only one RV campground worth staying at in Denali, and it’s Teklanika Campground located at mile 29 on the park road. If you want a wilderness experience, with the comforts of your RV, “Tek” is the place to be.

The other option for RV camping inside Denali National Park is Riley Creek Campground, located at the park entrance. But here’s the skinny: you can’t drive past mile 15 unless you camp at Tek or purchase a bus ticket. That’s a sour deal in comparison.

The rugged Stampede Trail is known for being the location of the “Into the Wild” abandoned bus, where adventurer Chris McCandless died in 1992. It is located just north of Denali National Park. The first 10 miles of the trail is actually a road, albeit a rugged road. Many travelers camp alongside the road to enjoy the quiet, beautiful landscape. After being denied a spot at Teklanika Campground, the prestige of the infamous wilderness trail was too much to resist – we decided to tow the tiny house as far down the road as possible and campout.

Our tiny house crept down the pot-holed ridden road until it narrowed into a hiking trail. Driving slow and cautiously, it took us 45 minutes to drive eight miles. Feeling accomplished, we parked at a picturesque location and emerged from the truck. . . to a menacing hiss.

One of our trailer tires was screaming in pain as a sharp rock stabbed its rubber intestines. It deflated like a balloon and the world fell silent.

Disaster in the Wilderness

We were stuck in the middle of nowhere, or at least our house was stuck. Our cheeks flushed red – how could we be so foolish? The Stampede Trail is cursed!!

The last time we had a flat on the trailer, Guillaume patched the tire and drove to a shop with a special heavy-duty jack. We couldn’t patch this tire and we only carry our Anderson Rapid Jack which, after a few inches of lift, got stuck on our fender because of the way our trailer was made.

Pop quiz: How can we lift a 10,000 pound trailer in the wilderness?

Answer: With creativity and patience. Using our Anderson Rapid Jack, some spare wood to get the extra lift and a series of small adjustments with our tongue jack and scissor jacks, we slowly raised the trailer high enough to change the tire. 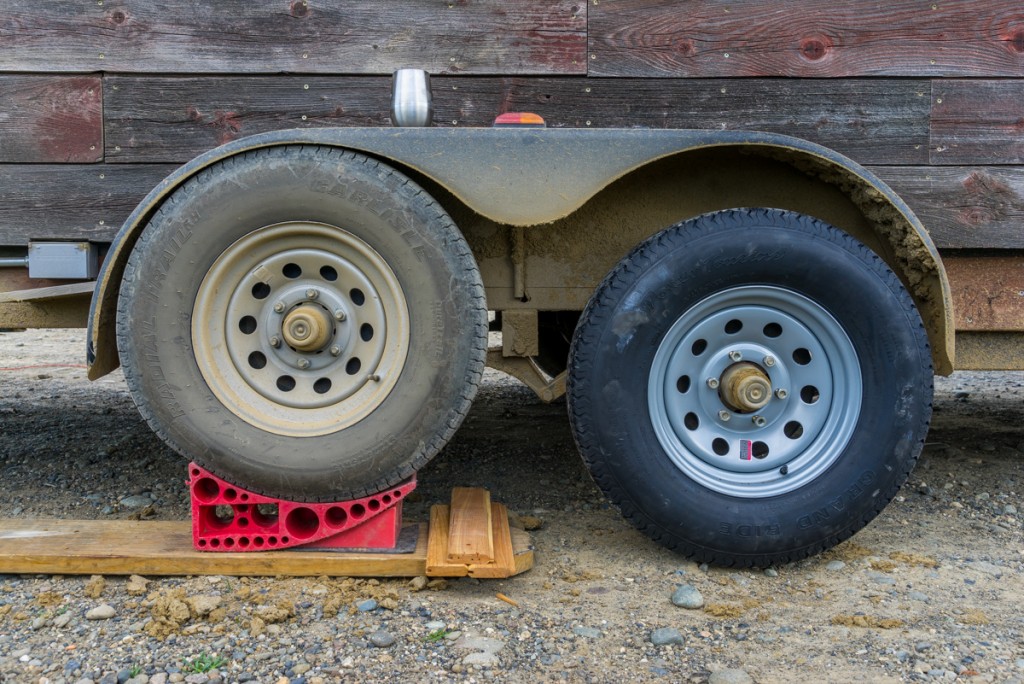 If we had lifted our back tire any higher it would’ve rubbed the fender! We were lucky the ground was relatively level, dry and solid. Mission accomplished! Time for a beer.

The absolute best way to see “The Great One” (aside from climbing it) is on a flighseeing tour. Getting up in the air can be pricey, but the experience is worth the extra mullah. Flights vary based on length: some circle the mountain, others fly up to the peak and turn back around. A few flights even land on a glacier, allowing passengers an opportunity to walk on the blue ice! Weather often determines how close a plane can get to the towering mountain. Denali is a shy maid. Often her head is in the clouds.

Guillaume and I booked a 70 minute flightseeing tour with Denali Air. The view from above is mystifying. Clouds folded and rolled outside my window while the watercolored valley below shimmered in the sunlight. Glaciers winked a bright blue eye in my direction, and my heart fluttered with exhilaration as we went higher and higher towards the peak.

Denali, The Great One

One Of Denali’s Many Glaciers

Inside The Denali Air Piper Navajo

“The Peak Experience” with Denali Air: $400 per person / 70 minutes. Rating: Once in a lifetime experience.

As a visitor, you can only drive 15 miles on the park road into Denali National Park. After mile 15, only tour buses are allowed (aside from the RVs heading to and from Tek). Green Shuttle Buses are the cheapest option, but the park also offers specialized (and expensive) tour buses. We took the Green Shuttle Bus to the Eielson Visitor Center at mile 66. 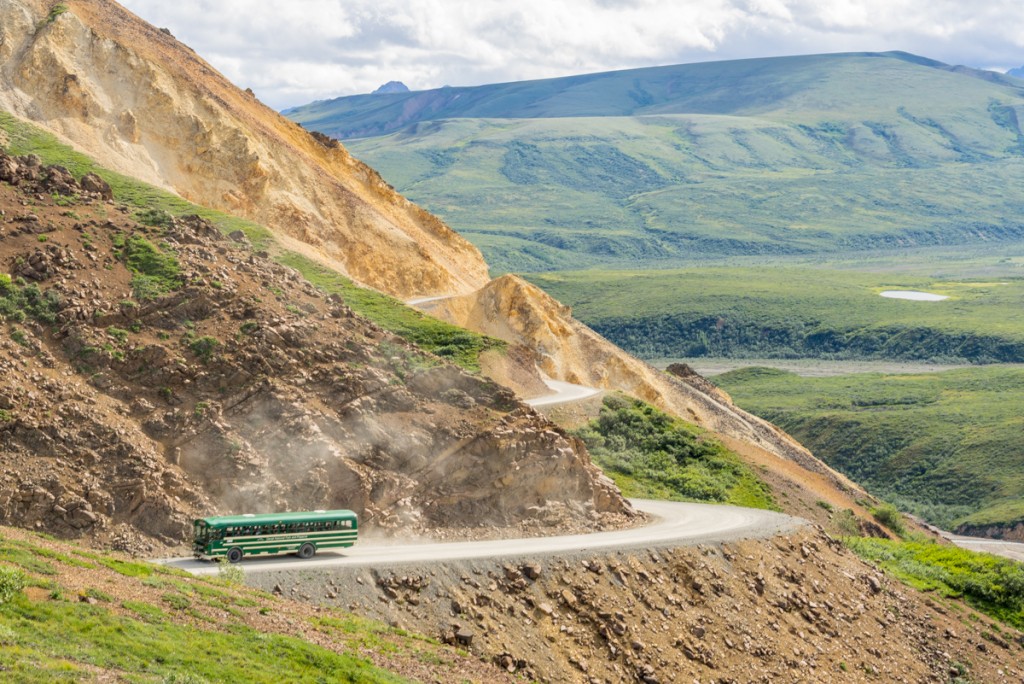 Our bus driver narrated jollily as he drove the winding park road. Periodically, someone would scream: STOP!! And everyone on the bus would smash themselves against a window, binoculars raised, to see a bear, moose, caribou or dall sheep. We saw three grizzlies climbing a mountain, but from our vantage point they looked like hamsters. We stopped at a few viewpoints, my favorite being the Polychrome Overlook which reminded me of the Artist’s Palette in Death Valley National Park.

The weather was gorgeous and Eielson offered magnificent views of Denali. Guillaume and I ate lunch and gazed at “The Great One” for an hour before catching another bus back home. *Tip: You can get on and off the Green Bus with your ticket. Simply tell your driver to pull over and wave down another bus when it’s time to go home.

Hamster sized Grizzly Bears. Can you see them?

Green Bus to Eielson: $35 per person / 8 hours round trip. Rating: Worth it on a sunny day, but on a rainy day this ride could be miserable.

What would we do different?

Even though we were unprepared and hit a literal bump in the road, we still enjoyed our short visit to Denali National Park. Next time, we’ll book Tek Campground and backpack for a few days.

Next Up: Salmon Fishing in Homer