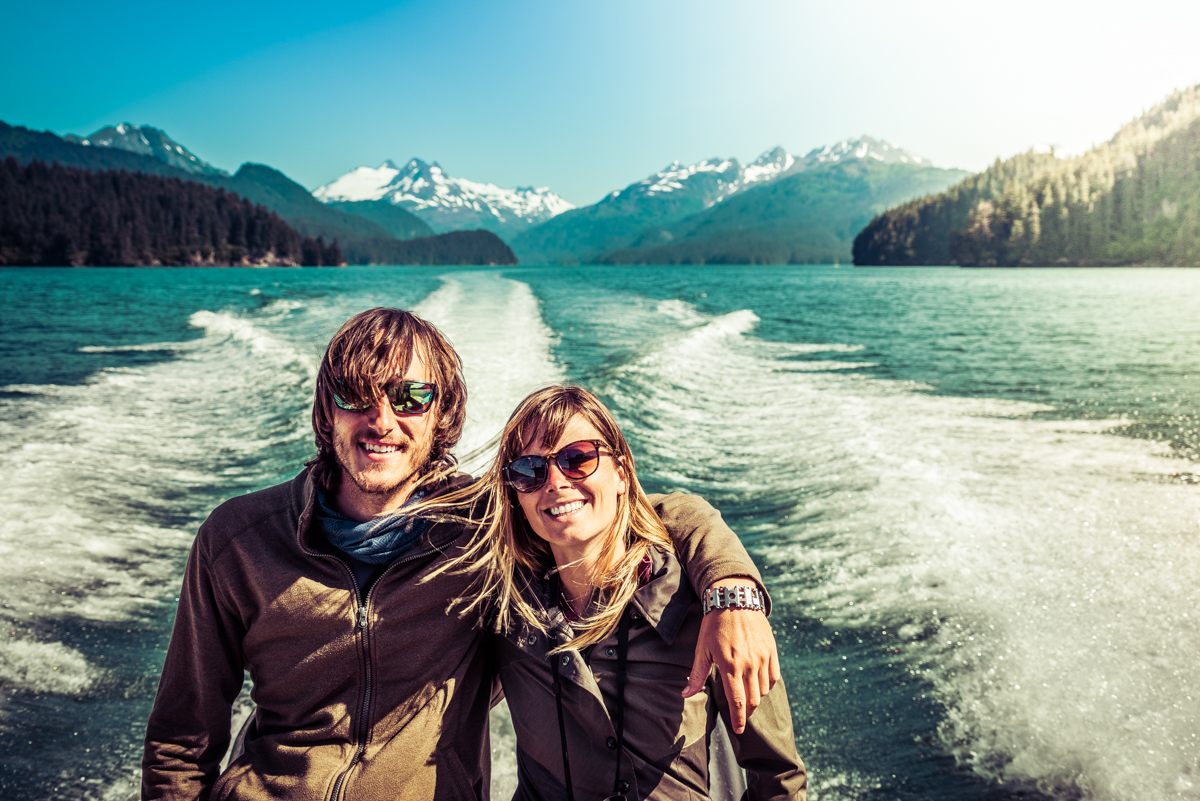 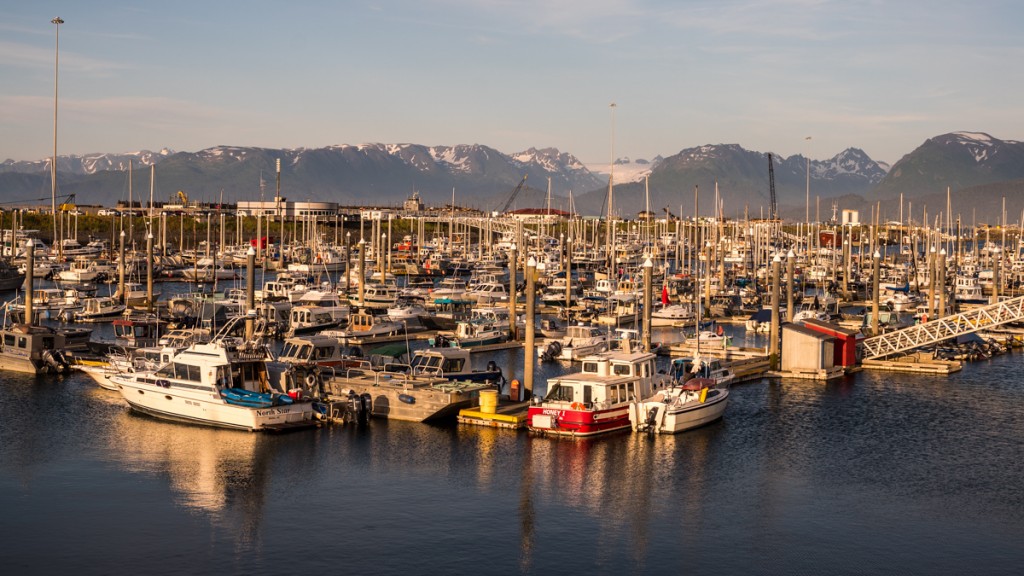 In Homer, Alaska, fishing is a way of life

Our wanderlust was satiated by Denali National Park and the Arctic Circle, yet our appetite for fresh fish was unquenchable. Guillaume and I paid $145 each for our Alaska fishing licenses AND we purchased a $200 collapsable fly fishing rod, but in the two weeks since crossing the border, we hadn’t caught a single fish.

My frustration had peeked – I wanted a fish! And not just any fish, I wanted to catch the quintessential Alaskan Salmon. 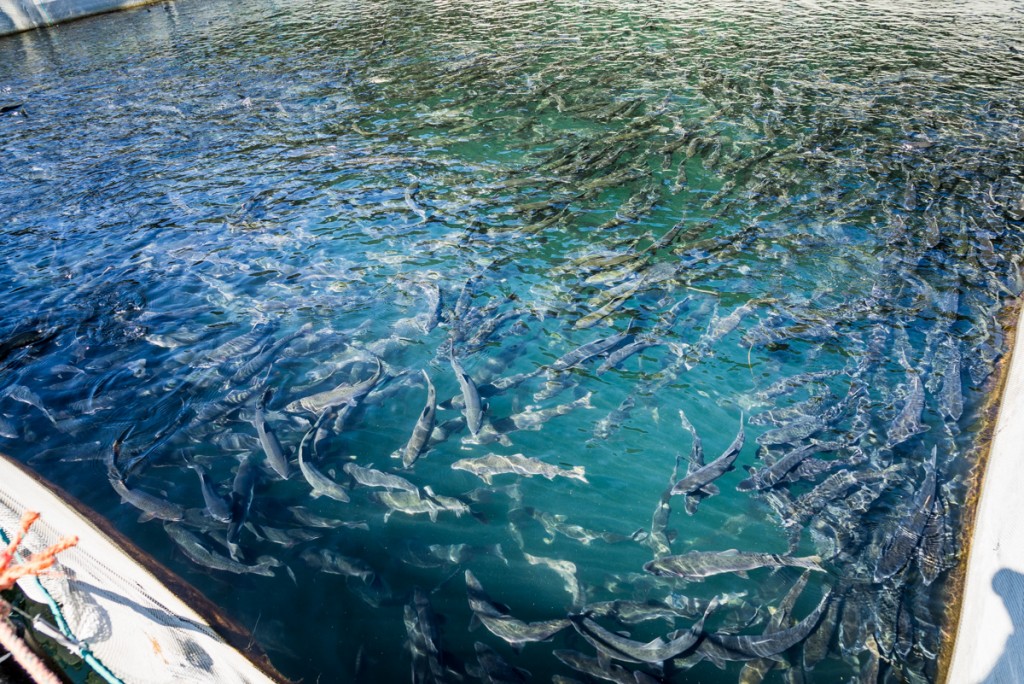 I never realized how much I didn’t know about salmon until I spent some time in Alaska. For example, I learned the standard wild caught salmon I purchase at the grocery store is a “pink salmon,” or “humpy” (unless otherwise specified). The pink salmon is the most common Alaskan salmon, the smallest and the least tasty. Many local Alaskans stick their tongue out in disgust at the mention of pink salmon. Red salmon or Sockeyes, on the other hand, are highly sought after. The larger fish is so delicious many sushi restaurants use choice sockeyes for their sashimi. King salmon are the largest and (some say) the most tasty Alaskan salmon, but they are heavily regulated and require the purchase of a $10 tag. Silvers or “coho” salmon are another flavorful variety.

To put it in layman’s terms: pink salmon = yuck, every other salmon = yum. It’s the Alaskan way.

That being said, I’m not a salmon snob. If a pink salmon wants to come home with me, I won’t argue. After all I’m used to paying for it! But the fact is, before coming to Homer, I hadn’t even caught a pink…

Homer’s main drag, “The Spit” is a long, narrow peninsula jutting out into the Kachemak Bay containing the marina, many popular restaurants and bars. A few campgrounds are available, two of which are dry camping only. Guillaume and I opted to stay in a dry campsite to save money. We spent $25 a night, which felt expensive for a gravel parking spot barely large enough it fit our tiny house, but it was centrally located right next to the fishing hole. 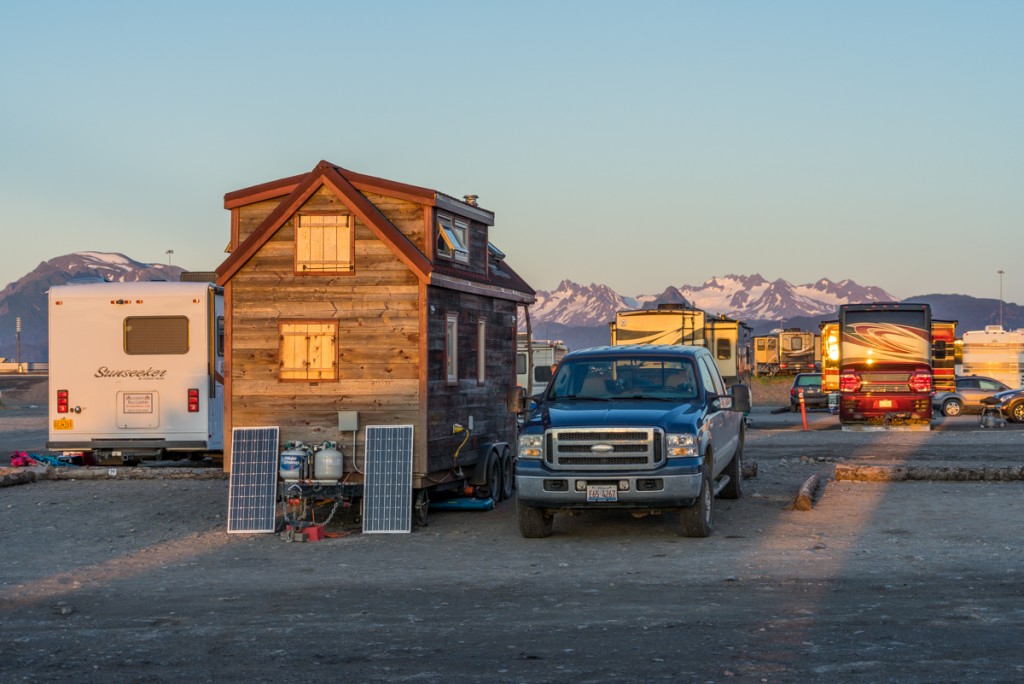 In the middle of the Spit there’s a small ocean-fed pond where salmon enter at high tide and become stuck at low tide – making it a great place to fish. Guillaume tried and tried, even fishing well past midnight, but never caught a single salmon. We were beginning to feel pathetic.

The #fishinghole in #Homer #Alaska is nothing but a trap! A trap for salmon or tourists, I’m not sure yet… I tried every lure I had in my tackle box and every bait I was recommended. The only bite I got was from an Irish Lord poisonous fish. I saw dozens of salmon swim by, they didn’t care. Well, it could also just be that I’m no good at fishing 🙂 #atleastitwaspretty

If you can get out on a boat in Homer, do it! Not only will you increase you chances fishing, but it’s a resplendent experience. Arne, a local who reached out on our blog, offered to take us out on a boat with his family. 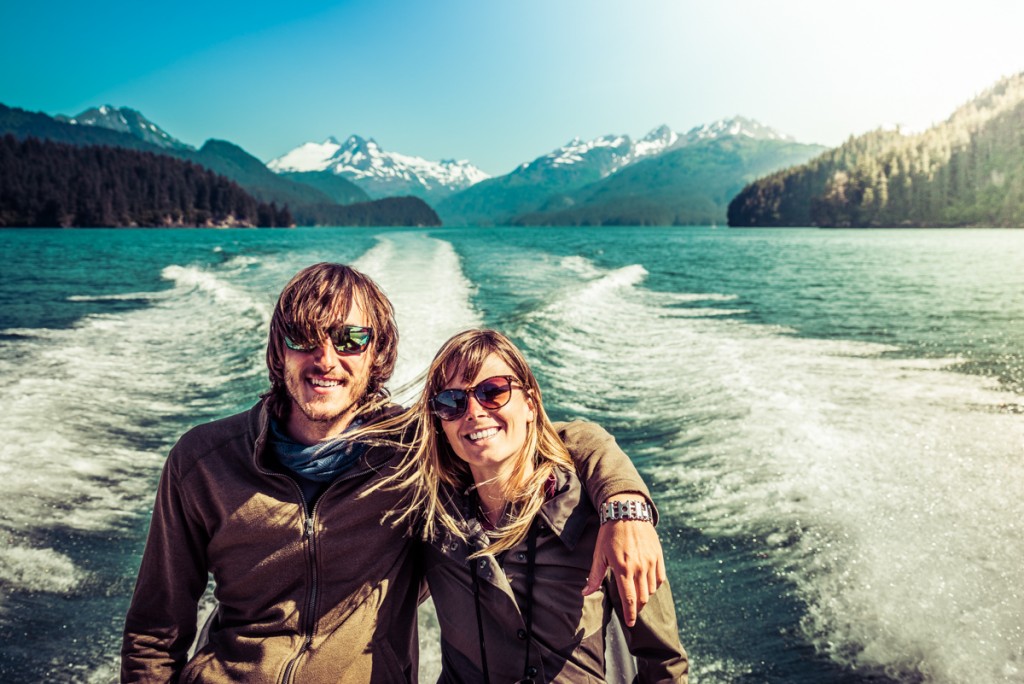 As we glided through reflective water surrounded by conical mountain peaks, brisk windy fingers crawled up my reddened cheeks and rustled my hair. Salty mist brushed my lips and forced my eyelids to shut. A gust echoed through the cartilage in my outer ear and whispered in my inner drum. The sea was alive and testing my body, as the vessel cut through the smooth water. 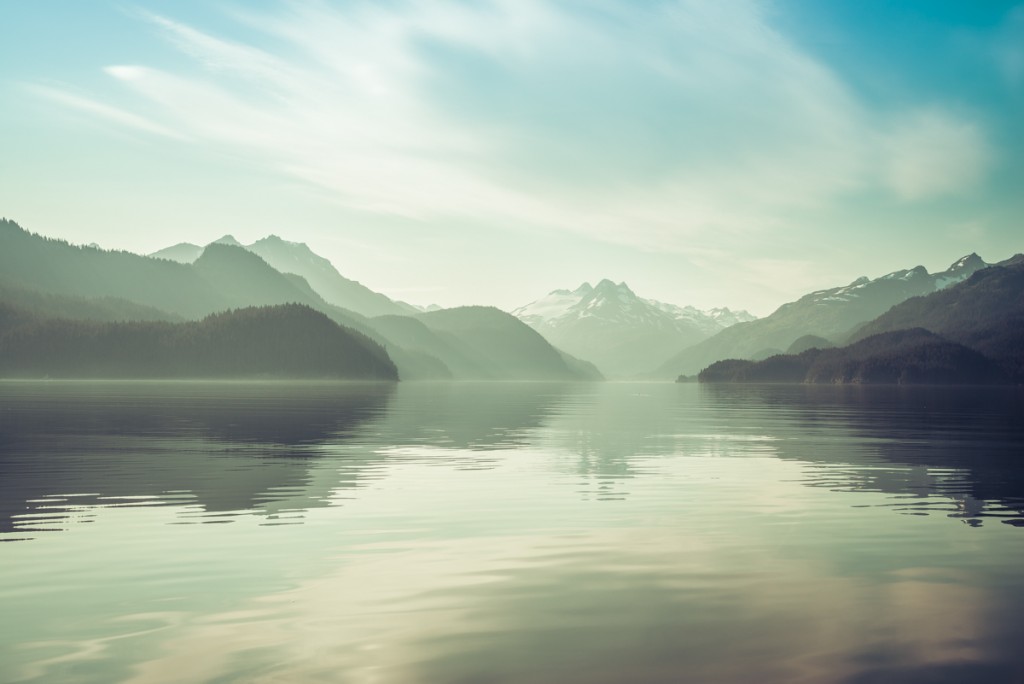 The tide was almost too low by the time we reached our destination – a fish hatchery located in a large lagoon that was only accessible at high tide. The boat scraped the ocean floor as we climbed the sandbank and dropped into the basin on the other side. 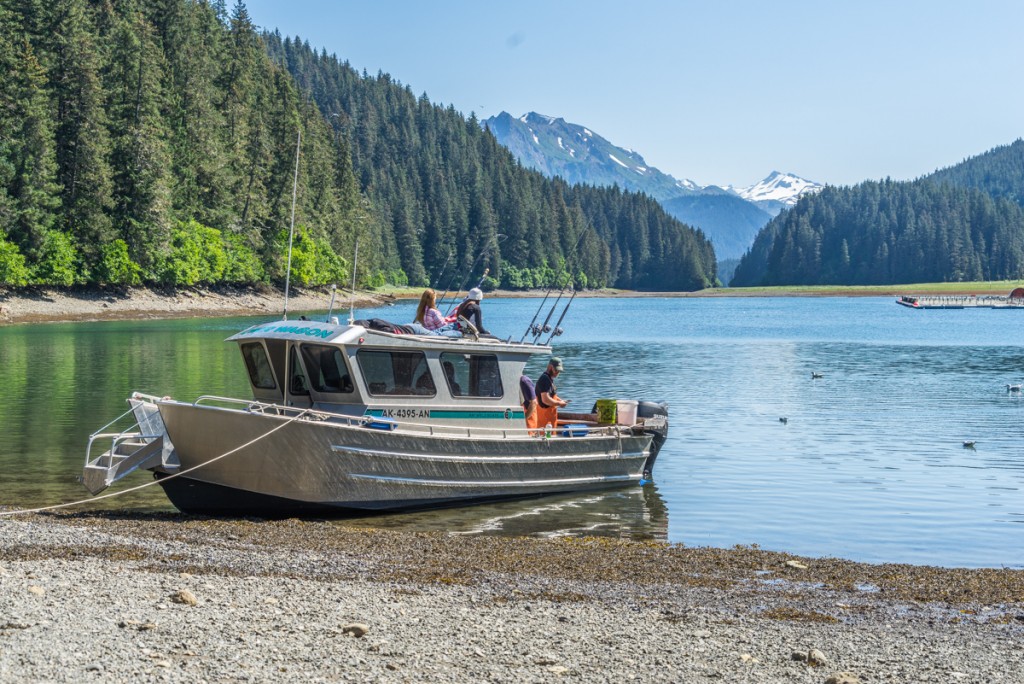 The lagoon would have been still if not for the constant stirring and breaching of a thousand trapped salmon. I was entranced by their musical dance: ripple, smack, splash! Like the swish of a good beer over your tongue and between your cheeks before the gratifying gulp. 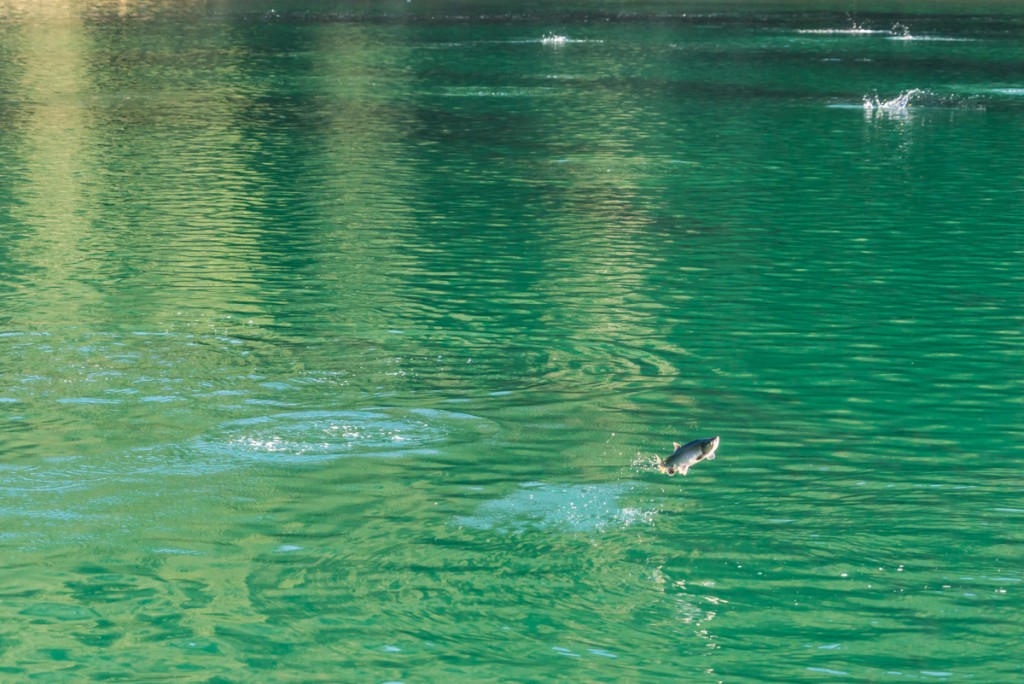 Fishing in the lagoon was almost too easy. We caught our limit – six salmon a piece – within the hour. Guillaume actually caught his limit in 10 minutes! After cleaning our catch, we picked wild blueberries, toured the fish hatchery, sunbathed and waited for the tide to come back in. It was a lazy day, but the pure abundance also made it “Alaskan.” For many locals, sustainable living is natural. Alaskans love their wild state and the riches provided by the land.

Finally, I had my Alaskan salmon.

A Bald Eagle Eyeing His Next Meal

Tens Of Thousands Of Salmon

Bringing The Catch In

This Bald Eagle Is Looking For Dessert

One local woman told me there are really three seasons in Alaska: 1). Boats, 2). Four Wheelers 3). Snowmobiles. “You’ll never see an Alaskan without some sort of a toy,” she told me. 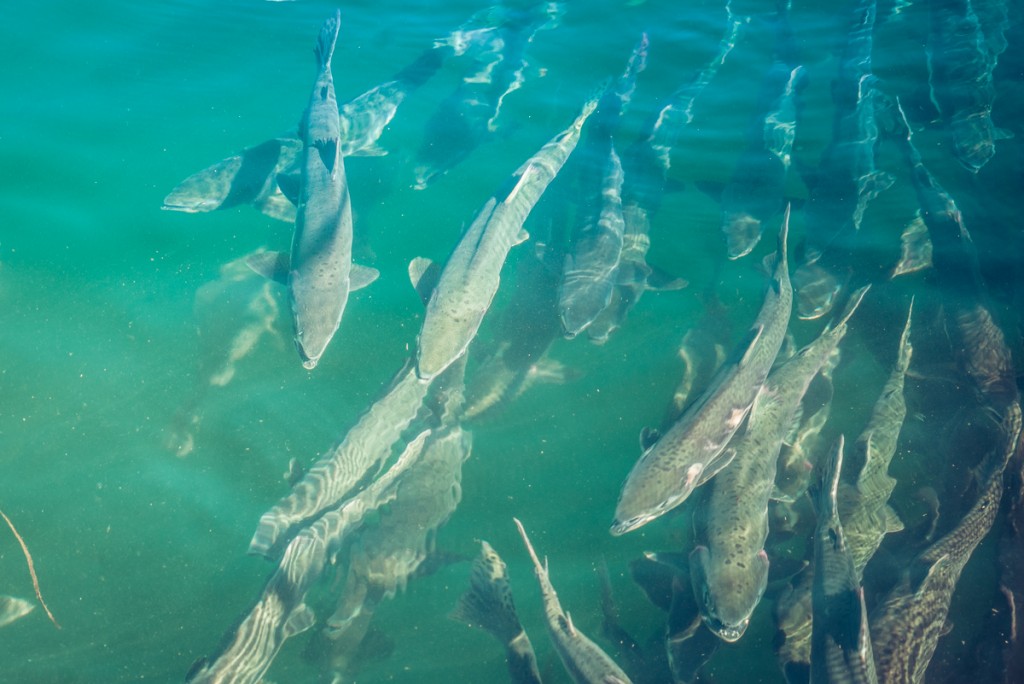 What’s that? You want to learn more about spawning salmon??

The story of “Sal,” a pink salmon on a giant journey…

Sal was born in freshwater but spent the majority of his life in the ocean. One day, Sal has a sudden urge to return to his freshwater birthplace to spawn and die. Only a small percentage of salmon actually complete the journey, but Sal is consumed with the idea. He has to go! The heroic fish sets out on the dangerous pilgrimage, determined to make the ultimate sacrifice for his future kin. Perhaps one of his future spawn should splurge for a “father of the year” mug, eh? 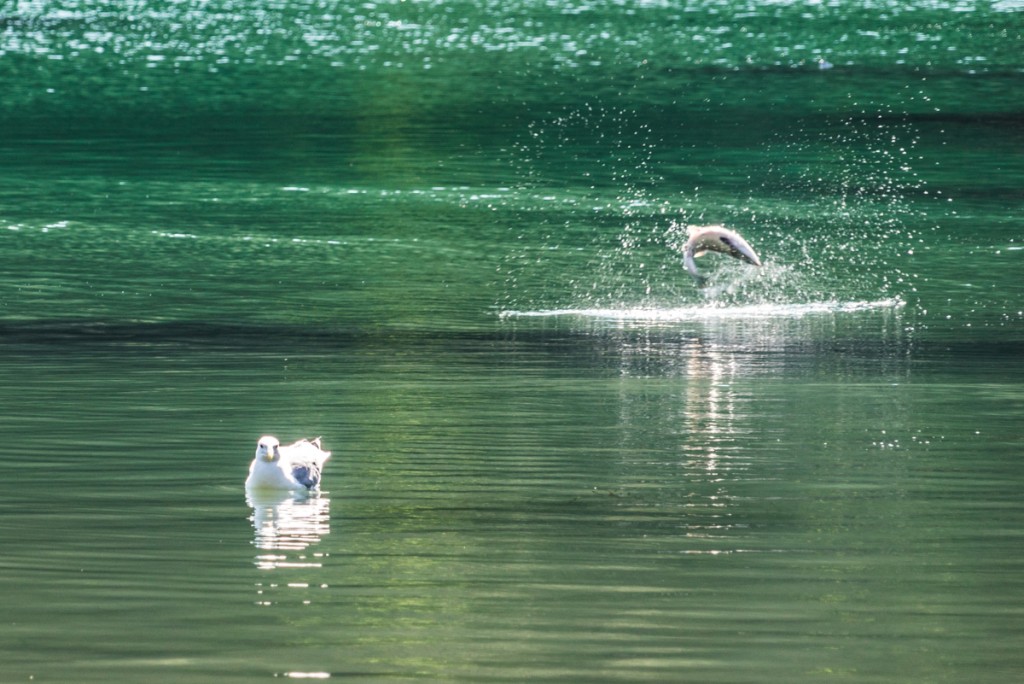 Sal swims upstream through brackish water, compelled by some inherent force to return home. He jumps and propels himself like never before, but it’s really tough! It’s like a P90X and CrossFit workout combined. Sal passes thousands of other salmon who have perished along the way. Some of them were his buddies, but he doesn’t stop to mourn or dwell. He dodges hungry bears and snagging hooks. He navigates through fish ladders and powers overs rapids like a body builder on steroids. Sal won’t stop for anything, not even to eat. He has only one thing on his mind: getting it on.

Next Up: The Entire Reason We NEEDED to Visit Alaska

*Thank you to Arne and his family for including us in their family fishing day!