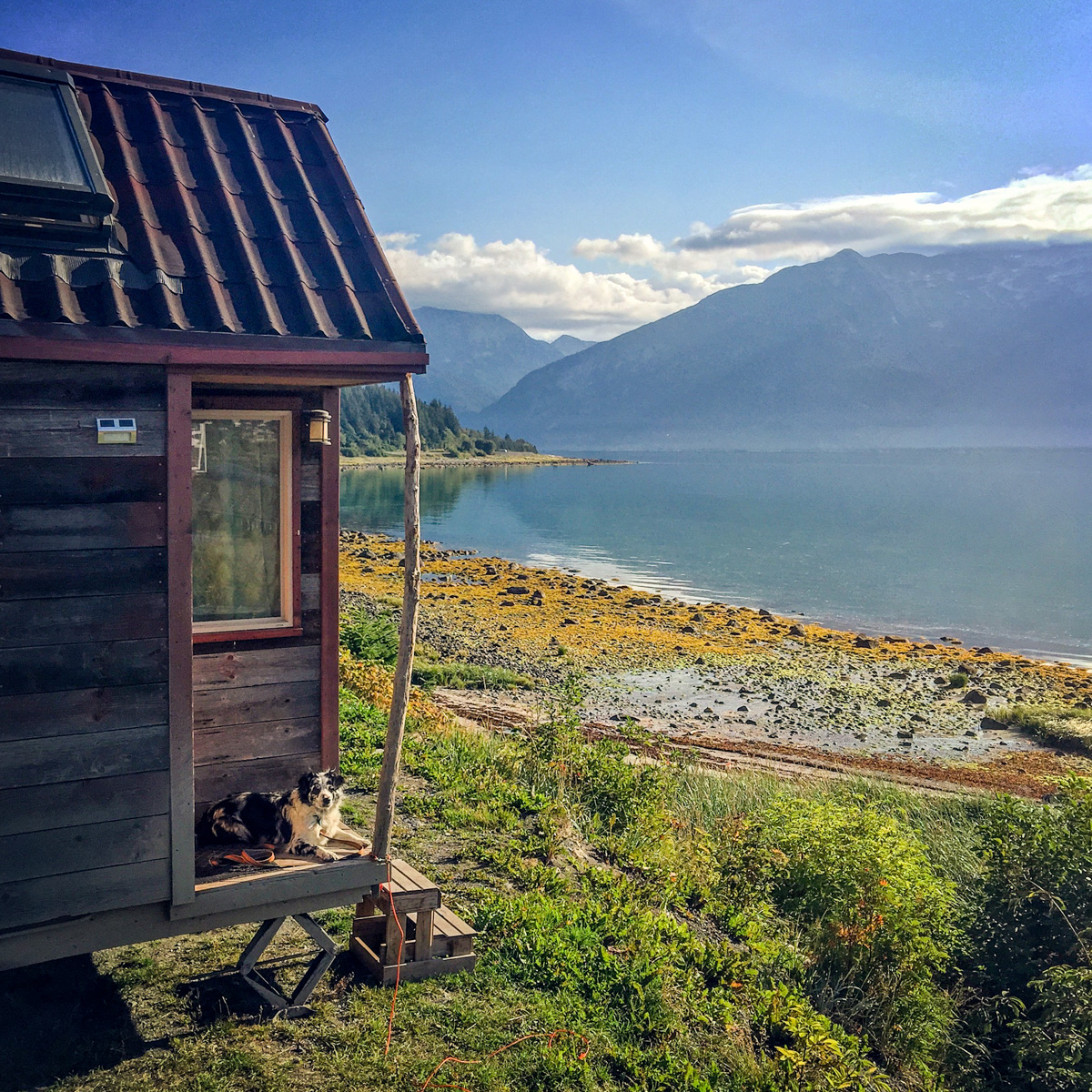 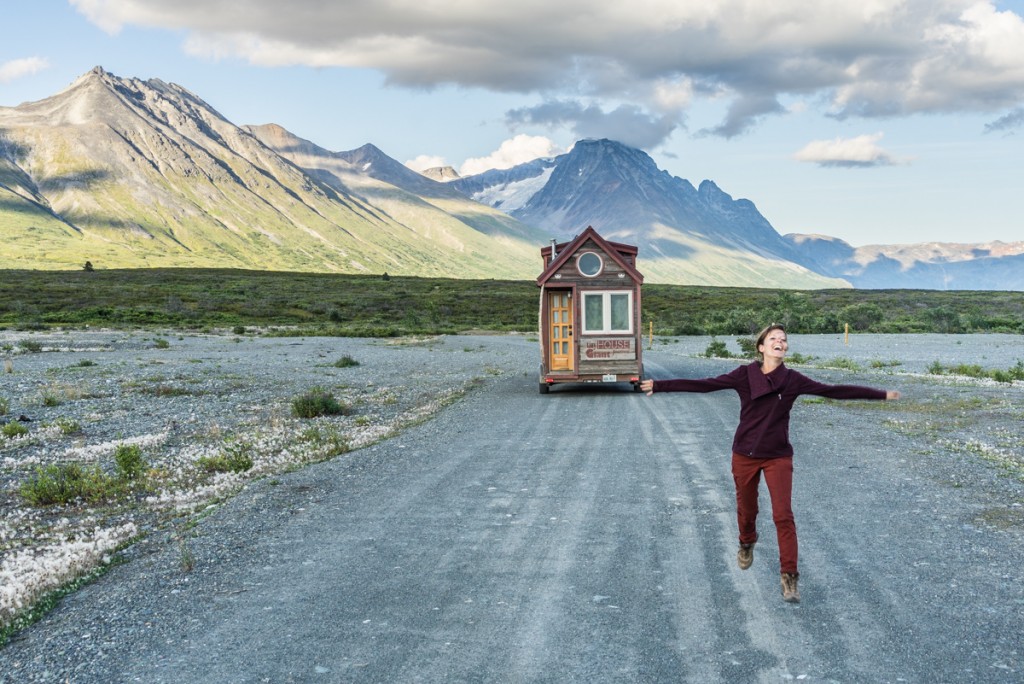 We left Alaska, only for a brief moment, crossing into the Yukon before dipping back down into southeast Alaska. We were headed to Haines, to catch a ferry south on the Alaska Marine Highway. Originally we had planned on driving the Alaska Highway down to Montana, visiting Llaird Hot Springs, Banff and Jasper National Parks, Edmonton and Calgary, but life happened. Our plans changed. And so we decided to put our house on yet another ferry.

The drive to Haines was spectacular and featured some of the most fantastic scenery on our trip thus far. Although Guillaume and I were a bit hangdog about missing the famous Alaskan Highway, the drive to Haines brightened our spirits. In a way, we became grateful for the change in plans: if we hadn’t decided to take the Alaskan Marine Highway, we would have never driven to Haines.

Haines is a quirky little port town, much like Valdez. We spent our mornings sipping gourmet coffee at the Rusty Compass Coffee House and window shopping at various ma & pop shops.

A quirky museum with a sense of humor.

The backstory I gathered from wandering through the museum:

Dan Pahl developed an obsession for hammers after living off-grid for many years. He began collecting antique hammers and displaying them around his home. Eventually Dan’s wife, who was tired of dusting his collection, said he could only display 100 hammers at a time in their home. After that, Dan got in the habit of rotating his prized tools so they each had a moment in the spotlight, and he didn’t stop collecting. 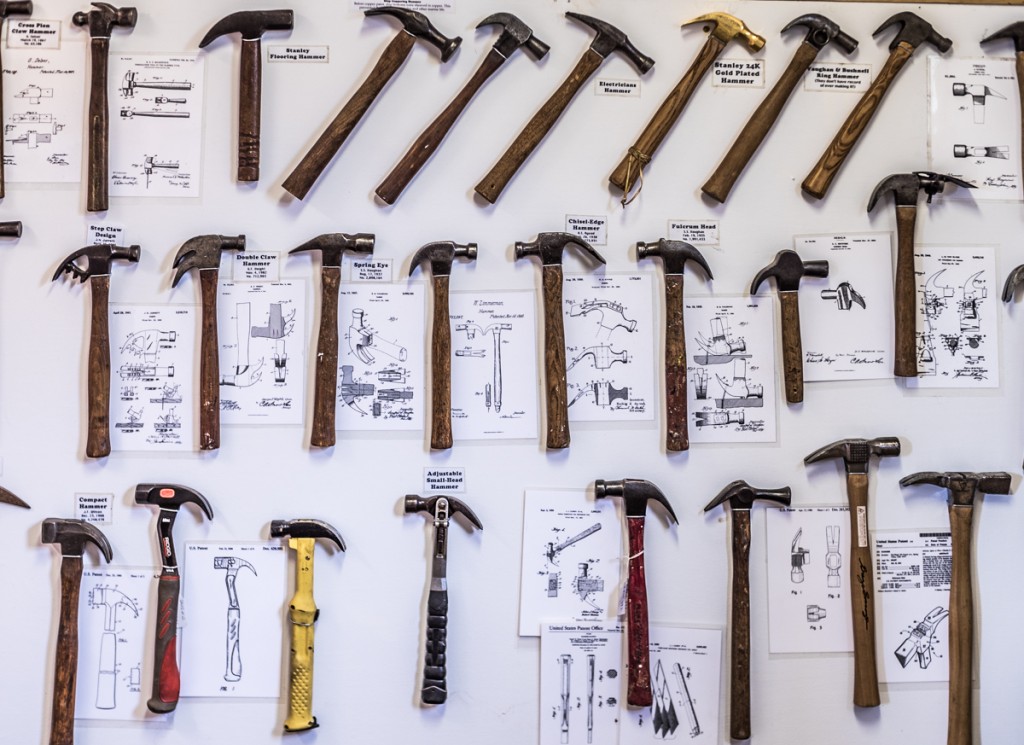 In 2002 Dan, urged by his friends and family, opened the Hammer Museum. Since then thousands of visitors have been able to view Dan’s fabulous collection, which continues to grow. Dan even has a wooden branch on display that is shaped suspiciously like a hammer. This wooden branch became a priceless tool (at least to Dan), when a complete stranger saved Dan’s beloved dog from drowning by smashing the window in Dan’s sinking car with the hammer-shaped-branch. Wow!

Guillaume and I spent about 30 minutes touring the Hammer Museum, which is enough time. My favorite hammer was the “World’s Older Hammer” – a dolorite ball used by the Egyptians to build the pyramids. Guillaume enjoyed a crank powered machine that does the hammering for you! Now that would have been nice on our tiny house build.

Meet “Speedy” the grizzly bear. Born in 2002, Speedy’s territory includes a popular fishing spot in Haines on the Chilkoot river. Many bears come to feed near the weir – a man made obstruction used to direct salmon – but Speedy is known to quickly run up and down the river, which earned her the name. 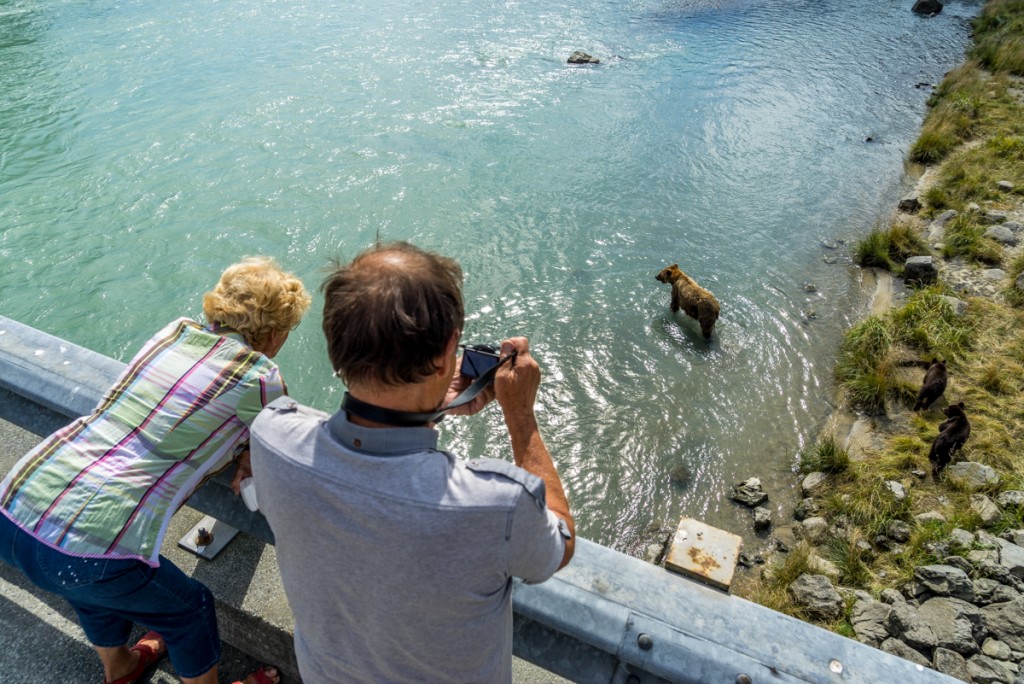 “There’s a bear coming your way, fast!” People screamed from the bridge, peering down at a few unsuspecting fishermen.

Speedy came bounding around the corner moments later to gobble the salmon carcasses left behind by the fleeing fisherman. She associates humans with food, which is bad news for her cubs who are learning to scavenge from their mother. Soon those cubs will gain independence and venture into town. Two of Speedy’s previous litters have been shot due to association with humans, and these two cubs will most likely meet the same fate this autumn. It’s not Speedy’s fault, she’s just doing what any bear would do – grabbing the easiest food source. Speedy has never ventured into town, so the local bear authorities continue to let her fish her territory.

Guillaume and I chatted with a wildlife research intern who was monitoring Speedy’s movements. I was distraught to learn that the two bouncy, adorable cubs would most likely be shot within the next few months. Unfortunately, as long as tourists and fishermen continue to frequent the area, there is no easy solution to the human/food association problem. The wildlife intern explained that zoos are overflowing with bears, so transferring the cubs to a zoo is not a possibility. Bear viewing and salmon fishing are two of the main tourist attractions in Haines, so the town is not going to close the area to the public. Lastly, there aren’t enough funds to protect the bears by building barricades and employing officers. 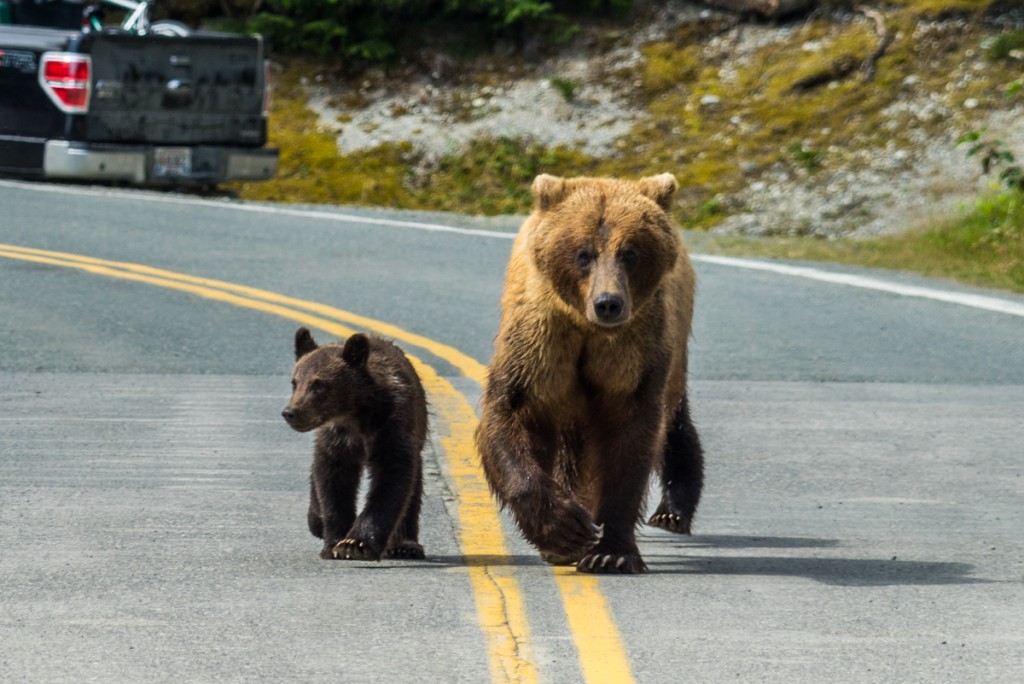 The information I learned about bears in Haines had a deep affect on my conscience. Guillaume and I were admiring the bears from safe distance, but our just being there could cause the bears to become comfortable around humans. I was glad I got to see the bears, but I felt a pang of guilt when I realized my presence might have hindered their future.

Speedy and her cubs do not see humans as a threat, and this dangerous comfort-level goes both ways. Below is a photo of Speedy crossing a bridge with her cubs as a tourist stands in the bear’s way to snap a photo. The man next to her is trying to control the situation. 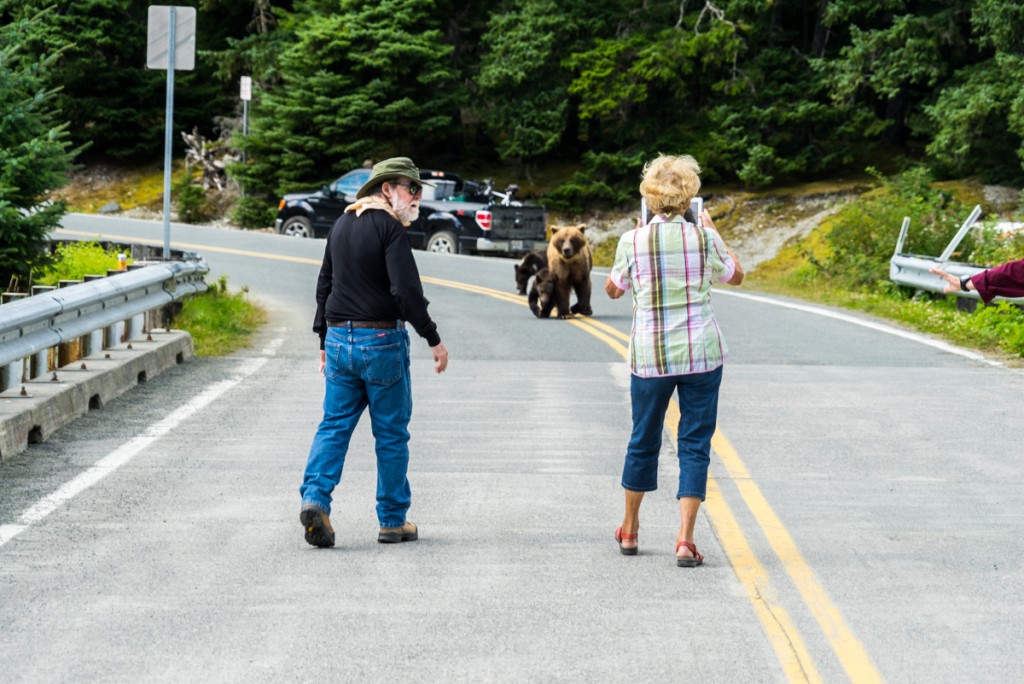 I hope future visitors to Haines, and other parts of Alaska, keep their distance and respect the bear community. I also hope visiting fisherman will continue to clean their catch responsibly and dispose of the carcass properly. Without someone around to enforce restrictions, there is no way to keep bears and humans from interacting in this mutually popular fishing spot.

We can only hope that Speedy’s cubs will find their own territory and never venture into town.

Next Up: The Alaska Marine Highway