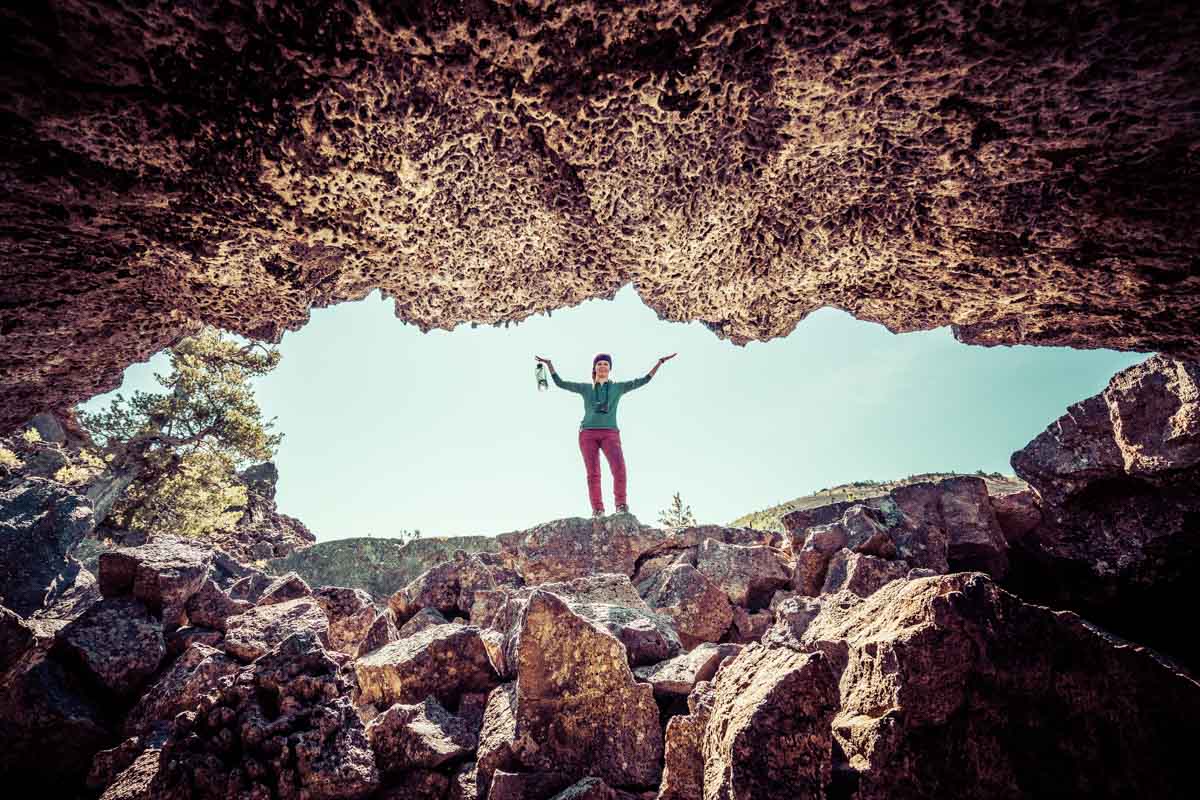 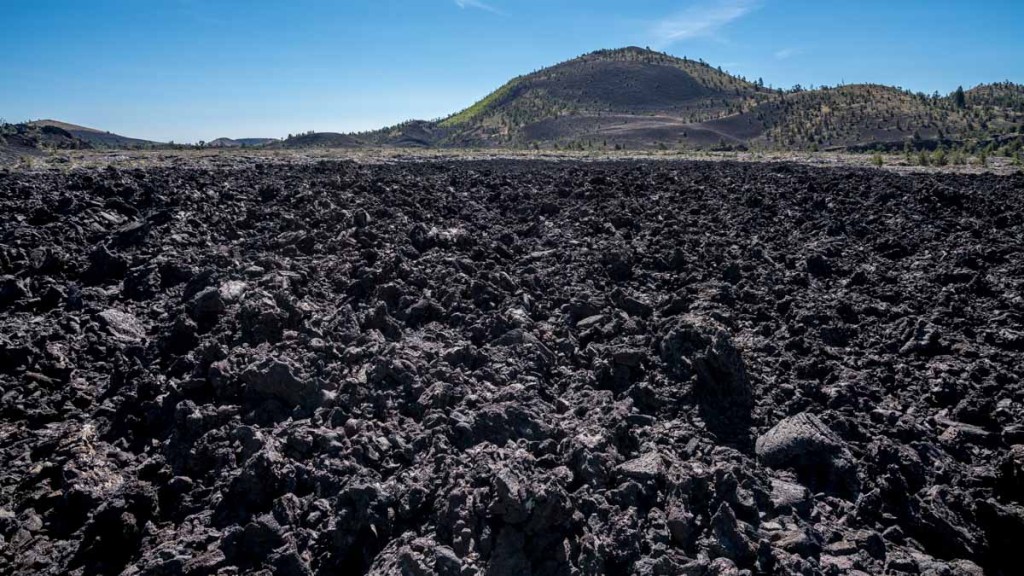 Endless terrain of blackened rock. Eerie silence. It might feel alien, but it’s here on Earth.

In Idaho, volcanic eruptions from over 2,000 years ago spewed rivers of magma over the ground. These slithering lava snakes cooled to create a stone ocean – black and smooth – covering 1,000 square miles. Lava folded onto itself as it cooled, forming caves. Explosions erupted creating unique volcanic features. The land seemed barren, but life sprang from the ashes. This is the world of Craters of the Moon National Monument.

A landscape named after its resemblance to the surface of the moon. 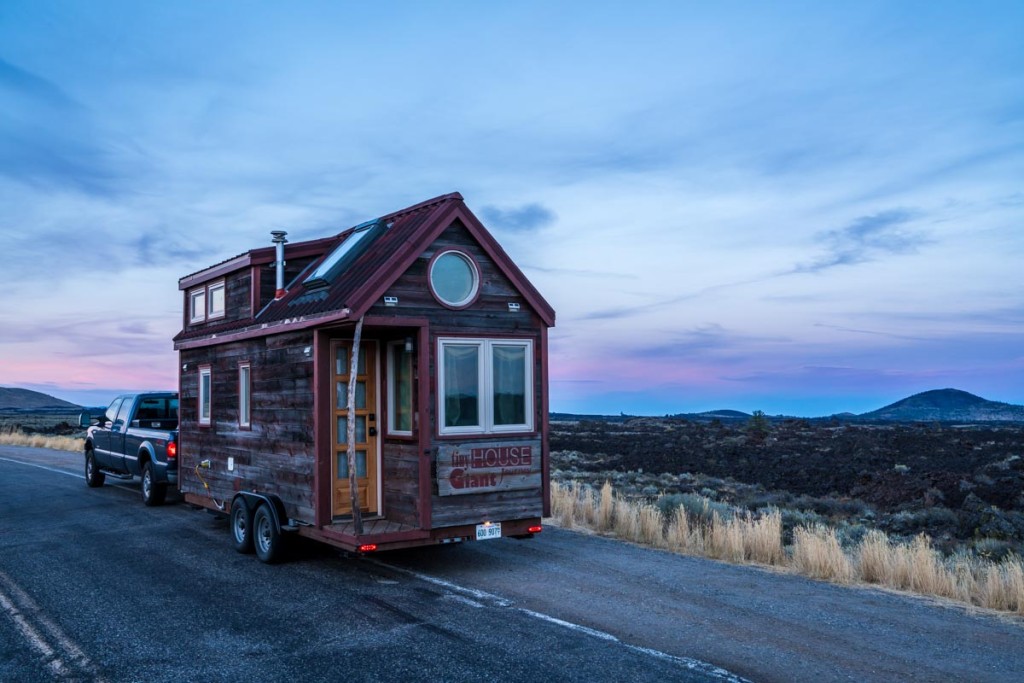 Guillaume and I arrived at the park’s campground at dusk. As we settled in at sunset, the purple sky accentuated the dark earth, while the stark silence of the seemingly dead landscape added an element of mystery to the unearthly scenery.

Note: Campsites are $15/night. There are no electric hookups, water or dump stations in the park. Pit toilets only. 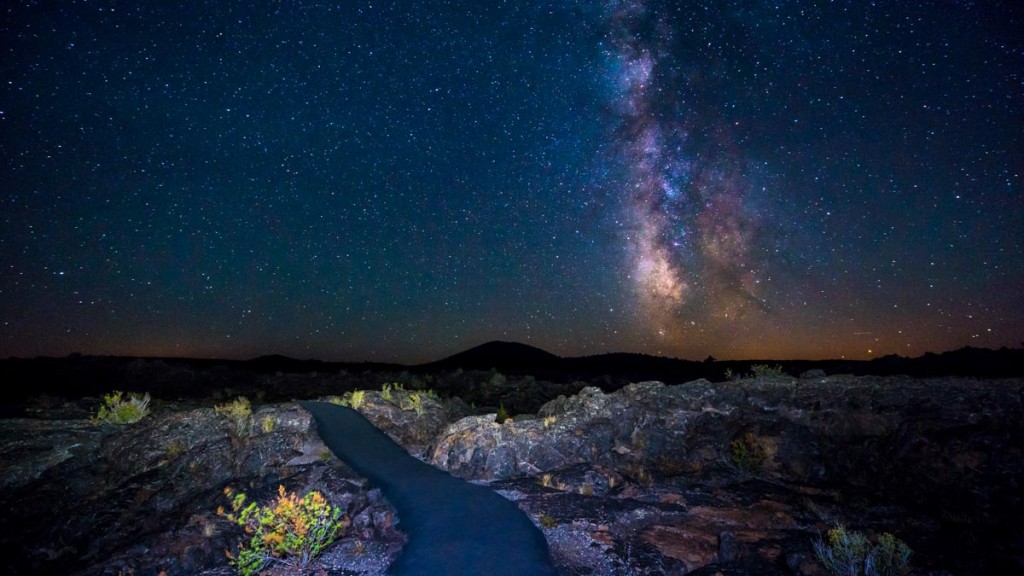 We had two days to explore Craters of the Moon National Monument, which is enough time to see the major attractions in the park, but not enough time to also explore the backcountry. If you’re interested in backpacking through the park’s wilderness, plan at least 3-4 days. 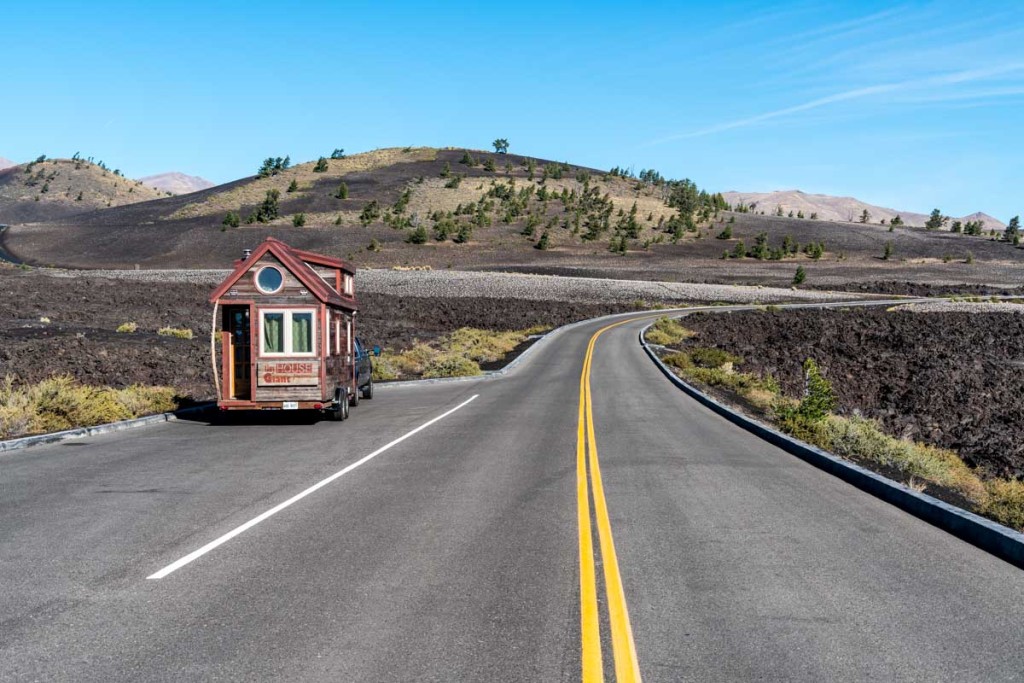 The best way to orient yourself at Craters of the Moon National Monument is to drive the 7-mile loop road. Along the route there are various stop-offs with volcanic features and trails. Guillaume and I enjoyed hiking the short path up to Inferno Cone: one of the highest peaks in the park.

As we walked up the steep trail, I listened as the ground crunched under my boots. We seemed to be walking on millions of charcoal-like pebbles, which glistened in the sun. 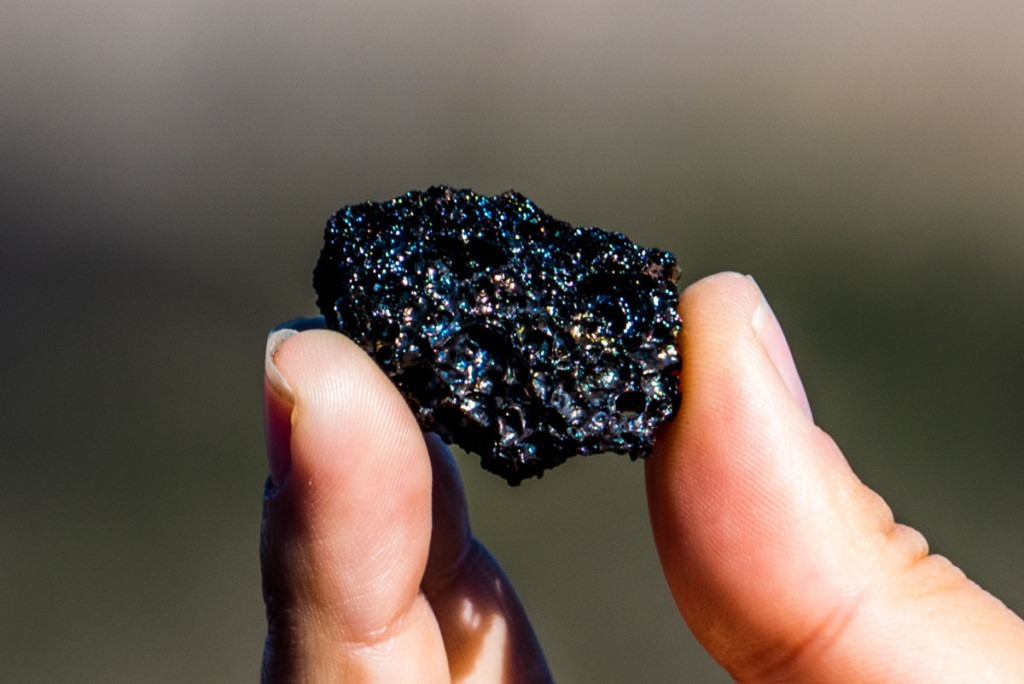 These pebbles are actually cinders with air holes, or vesicles, making them very light in weight!

Go spelunking in an ancient lava tube!  Embrace the one-of-a-kind thrill offered at Craters of the Moon by exploring a deep, dark cave made of cooled lava. Obtain a park permit from the Visitor’s Center before entering one of the caves available to park visitors, and come prepared with a flashlight and a sweater (it’s cold down there).

The spooky experience of being alone in a cold, black cave was fascinating and frightening at the same time. You’ve got to try it!

Some caves are high enough to stand and walk around in, such as Beauty Cave. Others may require hunching over or even crawling, such as Boy Scout Cave and Buffalo Caves.

Walking the Path to the Caves

The largest accessible cave in the park, Indian Tunnel, is bright and exposed due to multiple cave-ins. As I explored this cave, I had the impression that I was walking under a broken canopy of rock. If you’re prone to claustrophobia, Indian Tunnel will give you the cave experience, without the shut-in feel.

The sidewalk to Indian Tunnel

Inside the Enormous Bright Cave

Inside the Bright Cave

Under the Rock Canopy of Indian Tunnel

Guillaume and I spent all afternoon exploring the caves. Beauty Cave was my favorite, as it was a deep symmetrical tunnel, almost perfect in its formation. Guillaume crawled through Boy Scout Cave (one part of this cave is only one foot tall), until he could go no farther. He was completely alone in the narrow cave for 20 minutes, as I waited above and worried that I would have to crawl inside to rescue him.

A piece of advice: Go to the caves early! The lava caves are the most popular attraction in the park, so if you’re visiting in the busy season, do your spelunking in the morning to avoid the crowd. 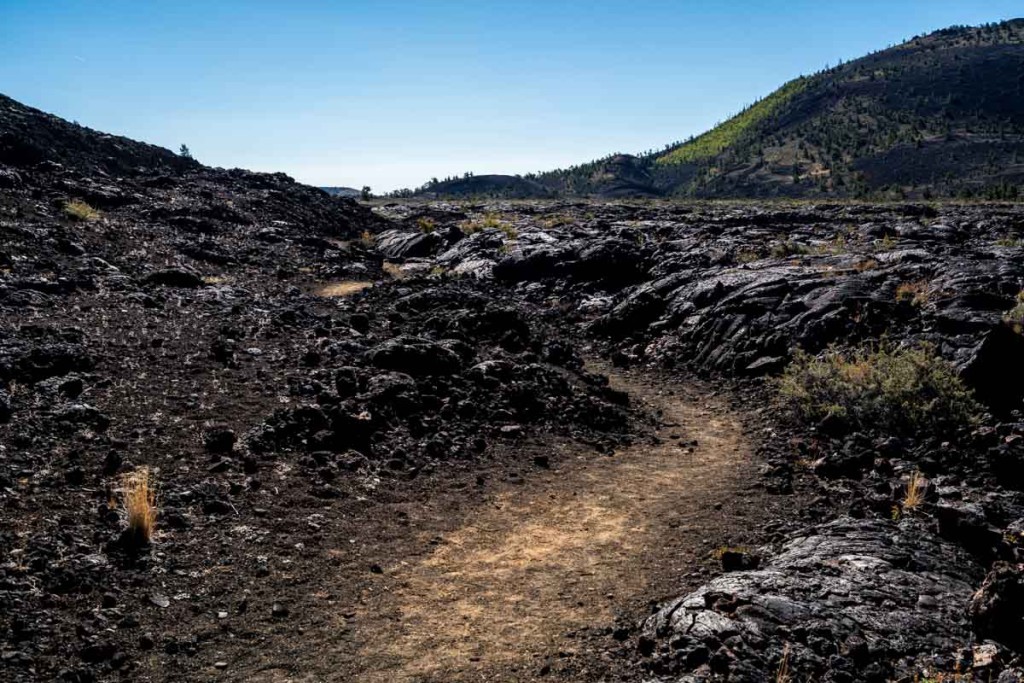 If you only do one hike while visiting Craters of the Moon, I suggest Broken Top Loop. The trail is easy, with almost no elevation gain, and in less than two miles you’ll see a variety of volcanic features, such as: pressure rings, cinder cones and lava bombs. The loop also offers access to Buffalo Cave, which is usually less crowded than any of the other caves available for visitor exploration.

Entering Buffalo Caves requires a bit of crawling and crouching, but once inside, the cave opens to reveal a maze of passages and rooms. As I explored the vast cave, I decided it could make a spacious home for 15-20 people – as long as you don’t mind hunching over every once in awhile.

I kept an eye out for bats, but a park ranger assured us that they prefer caves less frequented by human visitors. I was thankful for their absence. Personally, I’m not interested in being pooped on by a flying rodent.

The final portion of Broken Top Loop Trail offers a unique opportunity to walk on top of a smooth, ropy lava flow (or pahoehoe). The surface resembled uneven pavement, hardened into a snake-like formation. 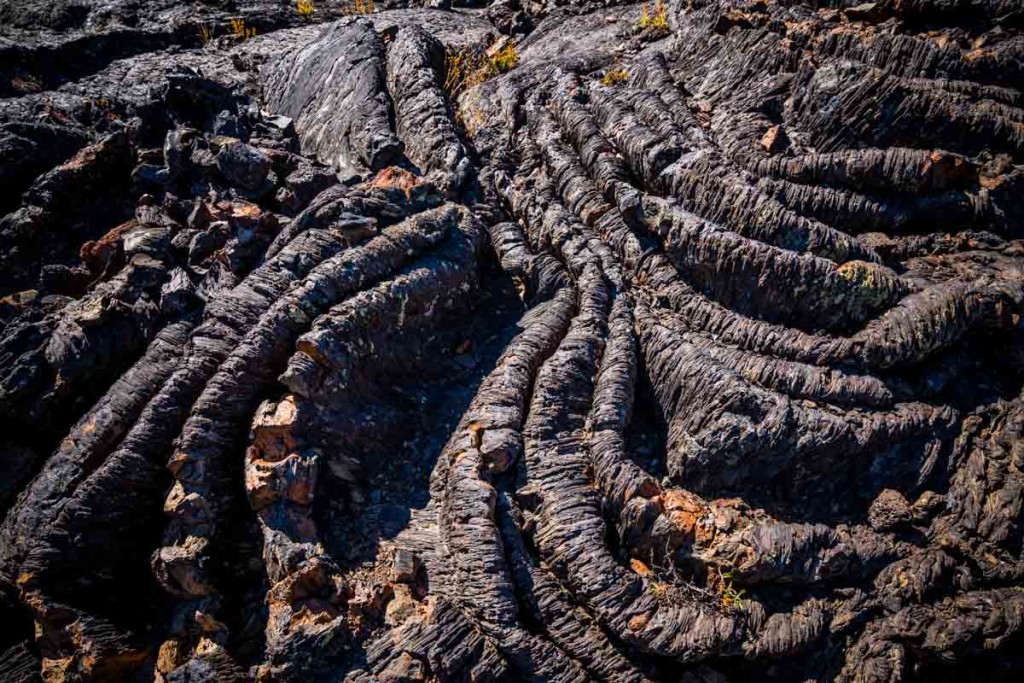 Note: The park requests that all visitors stay on the marked trail to reduce damage to the lava flows. Simply walking off-trail can cause the unique formations to crumble or smooth-out unnaturally.

4). Observe the Night Sky at Craters of the Moon 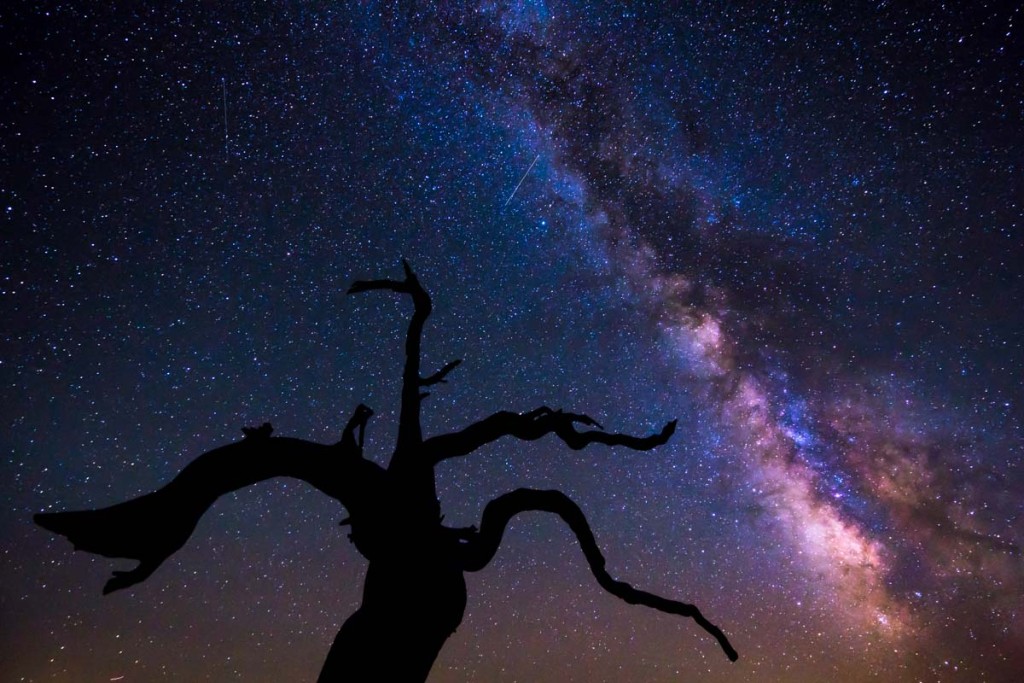 Gaze up at the moon… at Craters of the Moon! Guillaume spent an evening exploring the park at night, snapping gorgeous photos of the Milky Way. Enjoy a few of his photos below, and if you plan on night hiking at Craters, be sure to bundle up! Similar to a desert climate, the park can get hot during the day and frigidly cold at night.

Next Up: The Overwhelming Beauty of Arches National Park