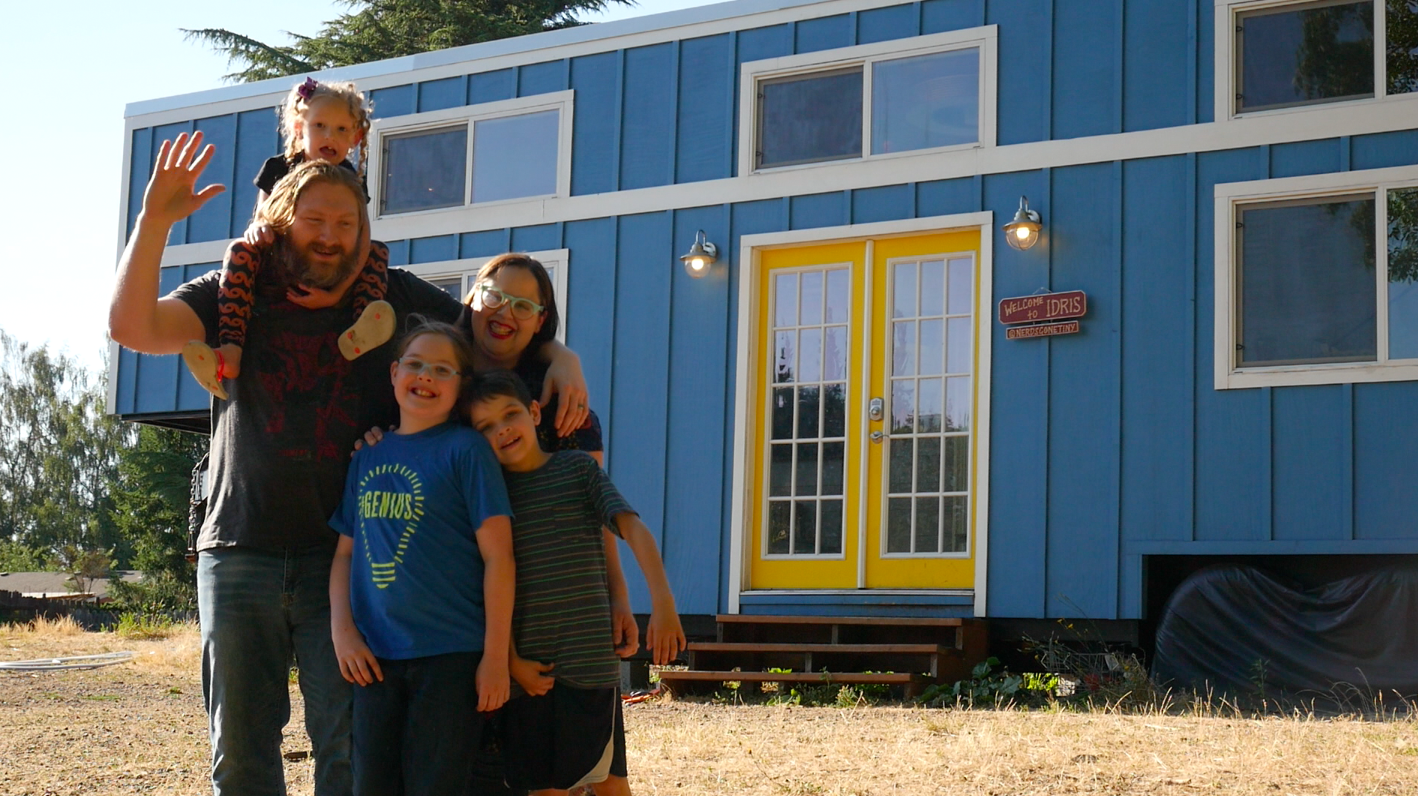 I met the most amazing Tiny House family! Their house is as unique as their personalities. You’re going to love this one.

One year ago, Kim and Raul decided to do something most people would call dramatic. They sold Kim’s business, downsized most of their belongings, and moved their three children into a Tiny House. Their goal was to live a more affordable and sustainable lifestyle, with the ability to save money for future.

Downsizing for this family of five was a monumental task. Raul and Kim are self-proclaimed nerds with a large collection of comics, video games, and other memorabilia. Painstakingly, they sold off and digitized their collection, keeping only a few cherished items. Raul owned over 30 “nerd shirts,” which he didn’t want to throw away or donate. Using the super power of alternative thinking, Kim had the shirts sewn into a quilt, which they now sleep with in their loft. 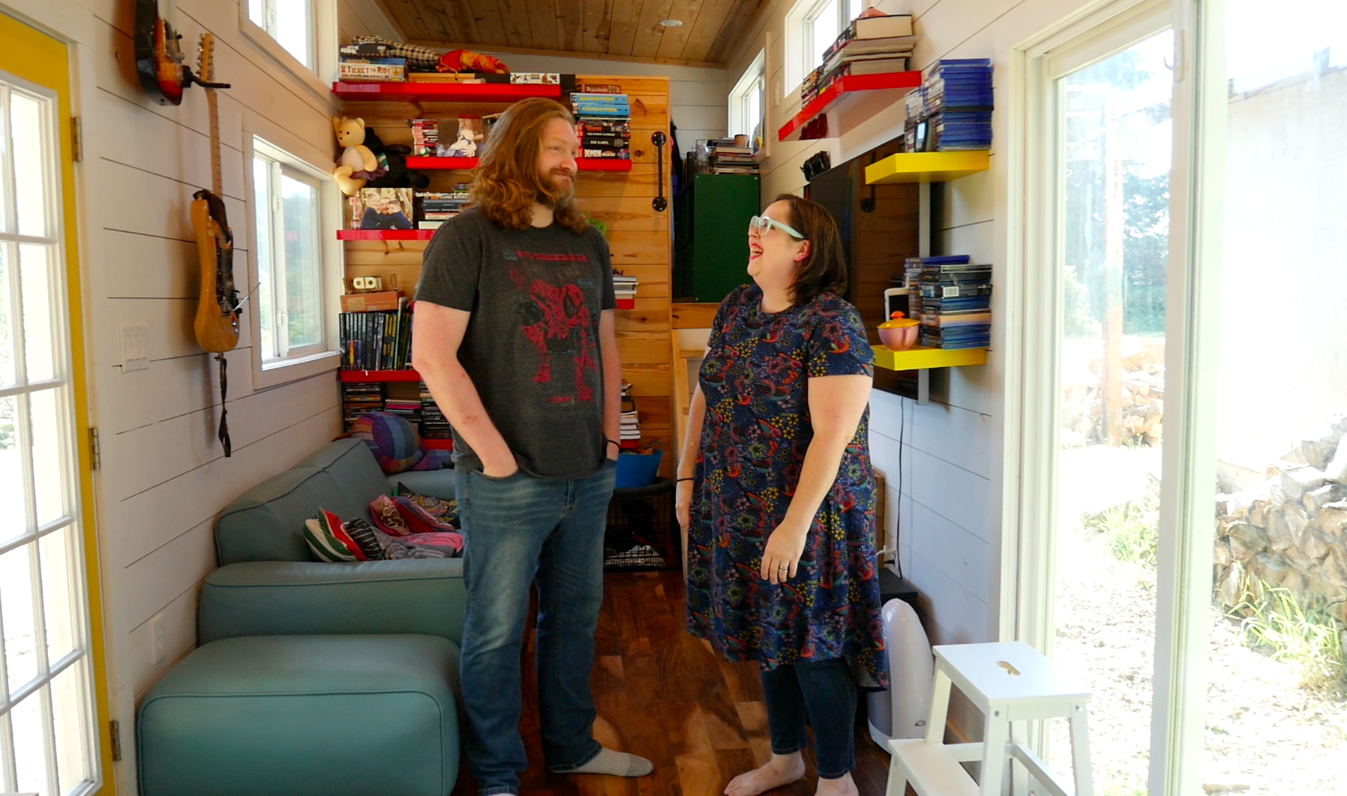 “At school, our kids are known as the ‘Tiny House Kids,'” Kim explained. “Everyone wants to have play dates at our house.”

Kim and Raul weren’t the only ones who made sacrifices. Their kids: Jackson (age 11), Zachary (age 8), and River (age 4). now have a shared bedroom the size of a typical walk-in closet! They don’t seem to mind. In fact, all three children told me they prefer their Tiny House to any other house. They learn to share their space, their belongings, and get along. “There’s no room for anger in a Tiny House,” Raul chuckled. “You don’t have anywhere to go to be mad.”

I’m reminded of Macy Miller’s story: a mom of two living Tiny. When Macy became pregnant with her second child, she decided to enclose her porch to make a shared bedroom for the kids. Read more about Macy and her Tiny House life with two babies by clicking here. 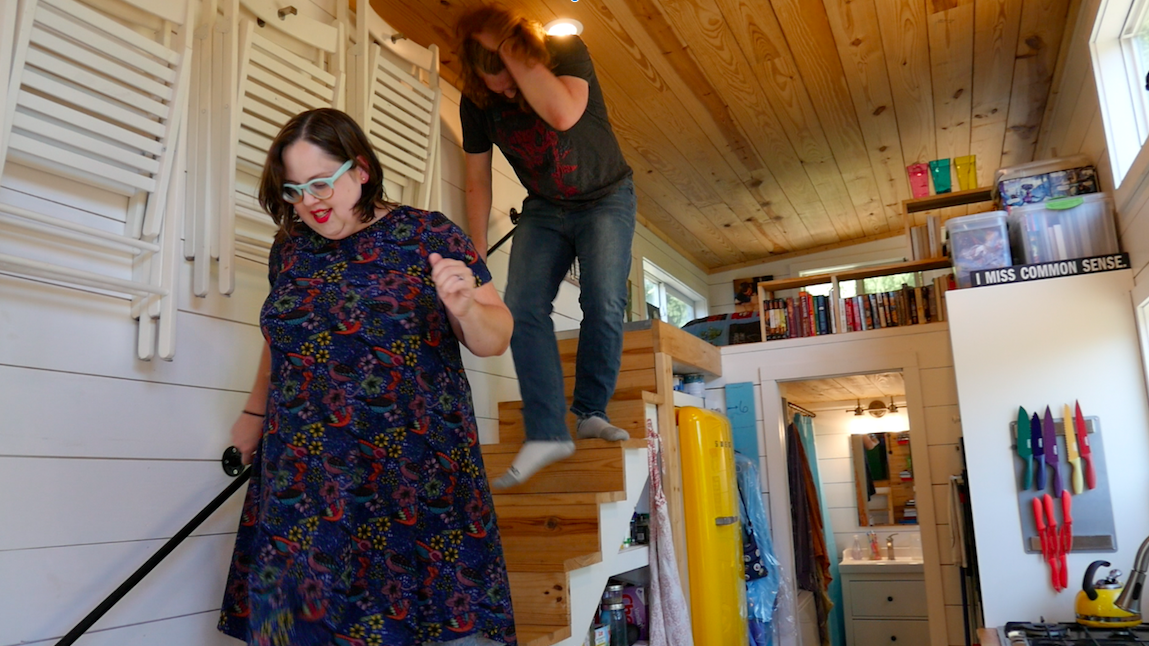 Kim and Raul took me on a tour of their cleverly designed Tiny House. I asked a lot of questions. I was so curious what it’s really like to be a Tiny House family. How do you organize toys? Clothes? Food storage? Do you ever feel like you’re going insane in such a small space with so many people?

Kim and Raul’s Tiny House is extremely organized, but I suppose you’d have to be organized with five people in 365 square feet! Nevertheless, it appears that Kim has thought everything. She had her wedding dress made into a teddy bear, purchased a collapsible Christmas tree, and even stores her glasses without the bulky cases. The one thing she wishes she had more of is shoe storage. With five people, there are at least fifteen pairs of shoes to store. That’s a lot of shoes in such a tiny space!

“We play together more now and we have more family time.” – Jackson, Age 11

Aside from organization and keeping your sanity, many people want to know how Kim and Raul manage to have “adult time” while living in a Tiny House with kids?  “I just turn on the dryer,” Kim answered without batting an eye. “It’s kind of a loud machine, and it shakes the house a tiny bit.” Raul blushed. We all laughed. This lifestyle… it’s funny sometimes.

Could Your family be a Tiny House Family?