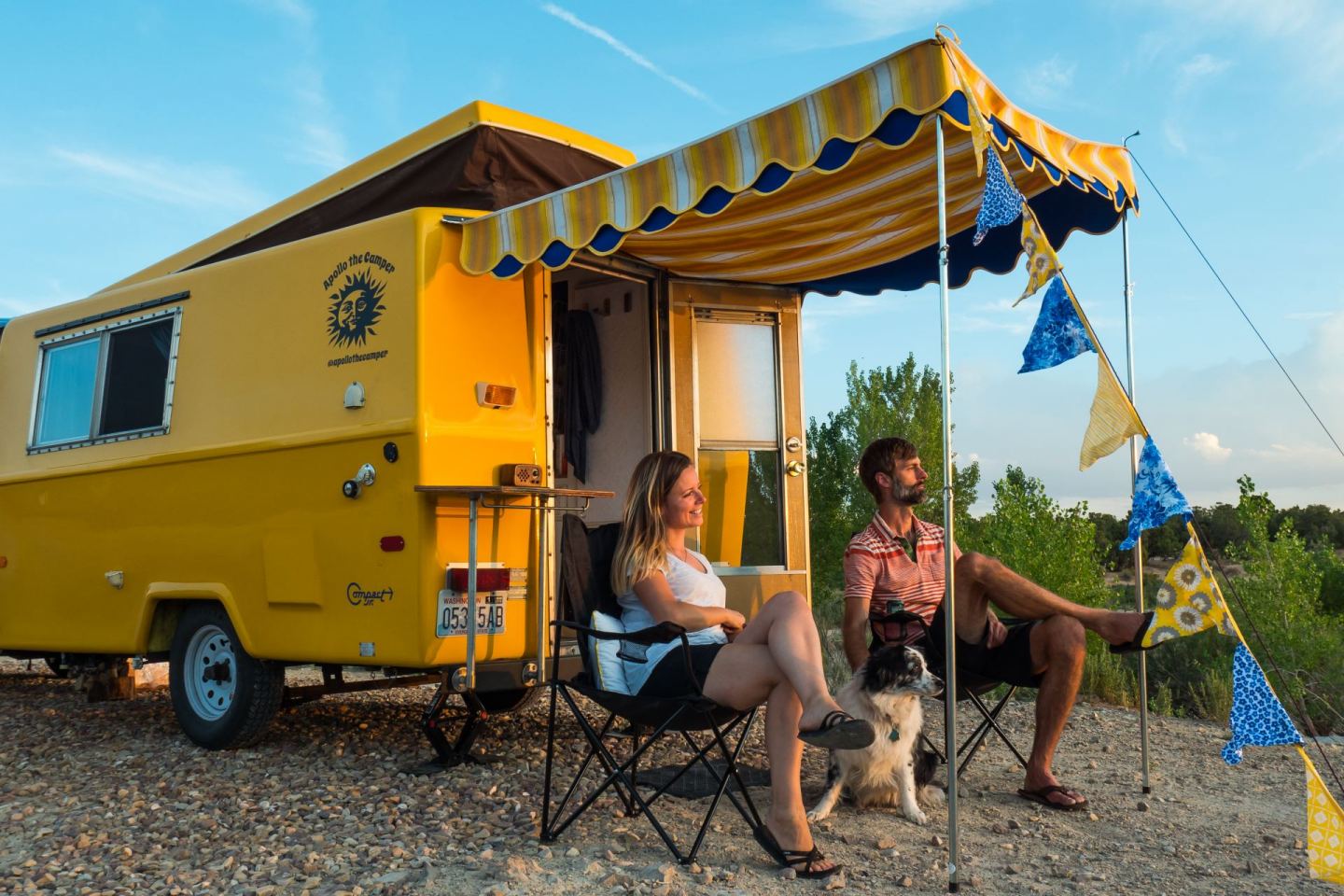 What now?! I screamed, after hearing an ominous noise coming from the 900-pound vintage camper that I was towing down the highway. These words have poured out of my mouth more than once in the last three weeks, since starting my cross-country road trip. Something had broken, that was for sure, but what? Do we need to pull over? Can this be dealt with later? I rolled my eyes and turned on my hazard lights.

I consider myself a seasoned road tripper. I’ve driven across the country several times. Mostly my trips have been from Illinois (where I grew up) to the west coast (where I live now). Every time I make the journey I convince a new co-pilot to join me, and I take a different route. I’m fairly certain I’ve driven every major highway between the Pacific ocean and the St. Louis arch.

I’ve also taken road trips along the east coast, through Alaska, around the Big Island Hawaii, and all over Canada. Earlier this year, I even rented a campervan and drove around Great Britain for 9 days. I’m no stranger to towing either. As you may remember, I spent an entire year towing my Tiny House. 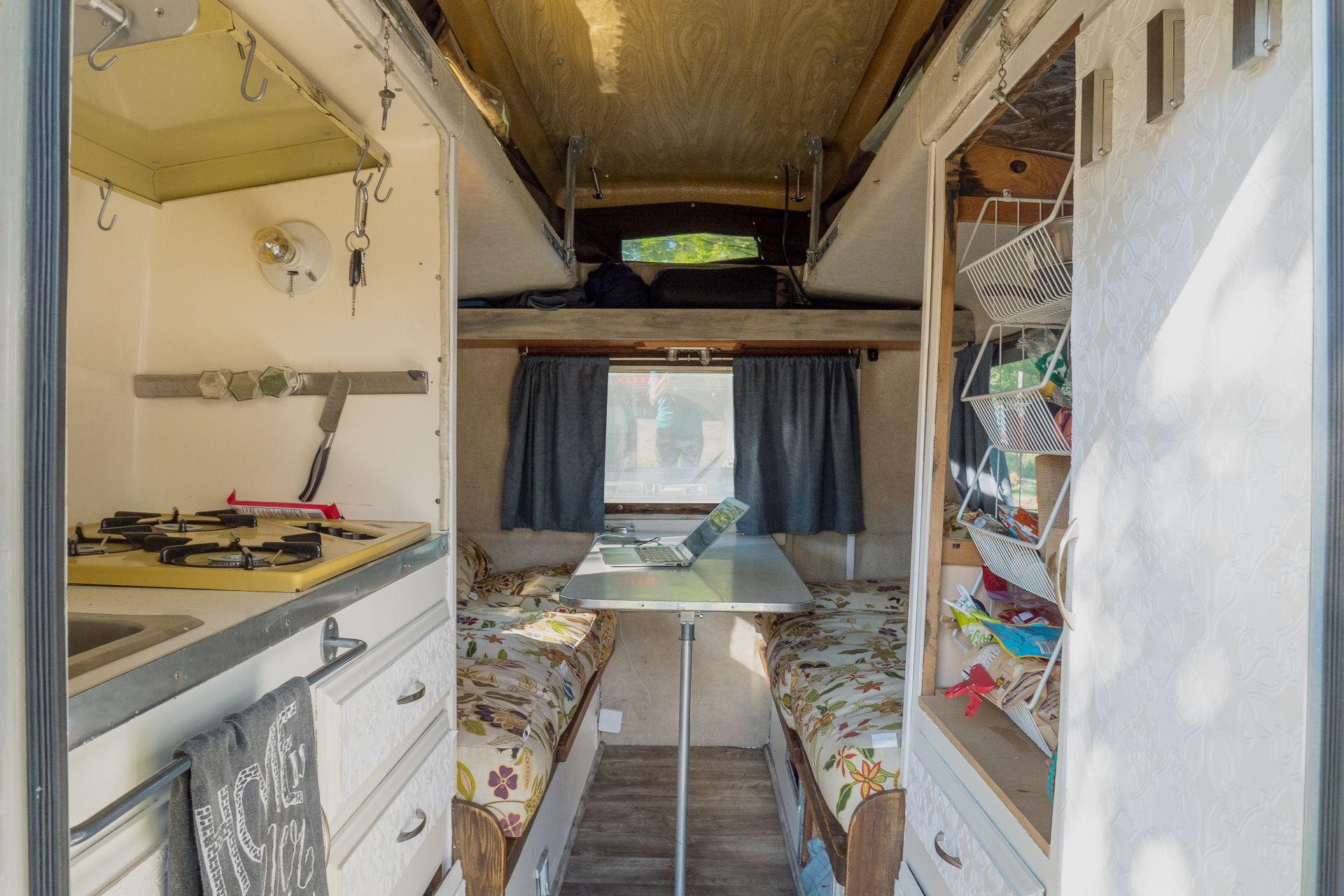 So why was I struggling so much with this vintage camper?

Let me back up a bit. This summer, I renovated a 1972 vintage camper with my boyfriend. We named him Apollo, by the way, so I’m going to refer to the camper as “Apollo” from time to time.  In the weeks leading up the trip, we pulled Apollo’s insides part, rewired the entire electrical system to work with our new solar generator (the Humless Home 1.5, if you were wondering), painted the exterior, replaced two broken windows, and decorated until Apollo was cute-as-a-button.

The camper didn’t need any real bodywork. The axels and tires had been replaced within the last few years. The rust was minimal. It didn’t leak (yet). The pop-top worked. Bottom line: When it came time to tow, I wasn’t concerned. Oh boy, that was naive.

What I failed to consider is that Apollo is an ole’ boy. As far as campers go, he’s a senior citizen. I don’t know much about the last 45 years of his life, except that Apollo has had more than a dozen owners. How many miles has he traveled? How fast has he been towed down the highway? I have no idea. Not long after we set out on our 6,000-mile road trip, from Seattle to Chicago and back, he started complaining.

Evidently, Apollo isn’t used to the abuse I was putting him through – ya know… being a camper. He’s more of a sit-parked-in-the-garage-for-twenty-years type of camper. Well, that’s just too bad, I thought. He needed to toughen up. 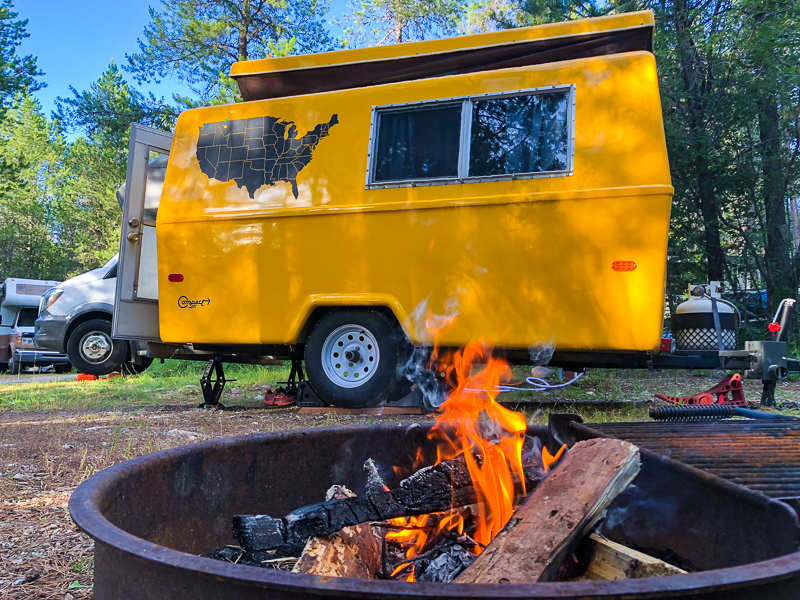 What Went Wrong on my Road Trip

Hmm, it might be easier to list what didn’t go wrong on my road trip. But here goes…

It rained on our first night in Montana. As I mentioned earlier, Apollo didn’t leak when we purchased him. With the top popped, water started to pool on the roof and, eventually, we sprung a leak. It seemed that the holes that were recently drilled for our solar panel’s brackets were the culprit. Before you say it – yes we did try to waterproof these holes during installation with washers and silicone. Apparently, we didn’t do a very good job. Luckily, it didn’t rain during the rest of the trip. So… we just dealt with it. 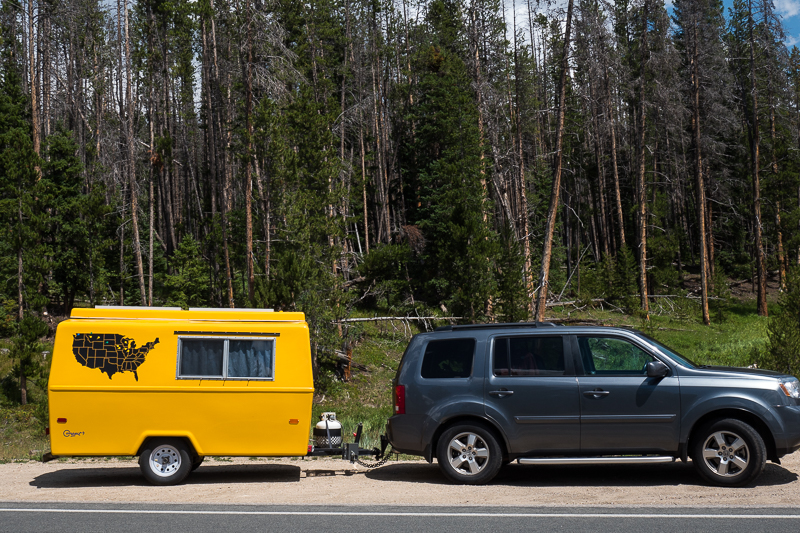 The next morning, I bottomed-out while towing. The trailer hitch jack – which was already too low to the ground – bent and made a horrible sound as it dragged across the pavement. It still functioned, so we left it this way for the rest of the trip (approximately 5,600 miles).

A few days later, our solar generator quit working. The jury is still out why this happened, but it meant that we didn’t have electricity in our camper, even when plugged into shore power (we wired the camper so that current would pass through the generator). Humless quickly sent a replacement unit to our remote location, and that fixed the problem. Still, we didn’t have power for a week.

One day, while I was driving about 75 miles per hour down the highway, a car pulled up next to us with a horrified passenger waving her arms. Apparently, Apollo’s door had flown open and was flapping in the wind! My eyes bulged, and I imagined everything in my pantry and closet littered across the highway. Why did this happen? Did we forget to lock the door? We pulled over and assessed the damage. Nothing was missing, so we locked the door and continued on our way. Then it happened again. We realized that the lock was jiggling itself open! From then on, we had to bungee our door shut. 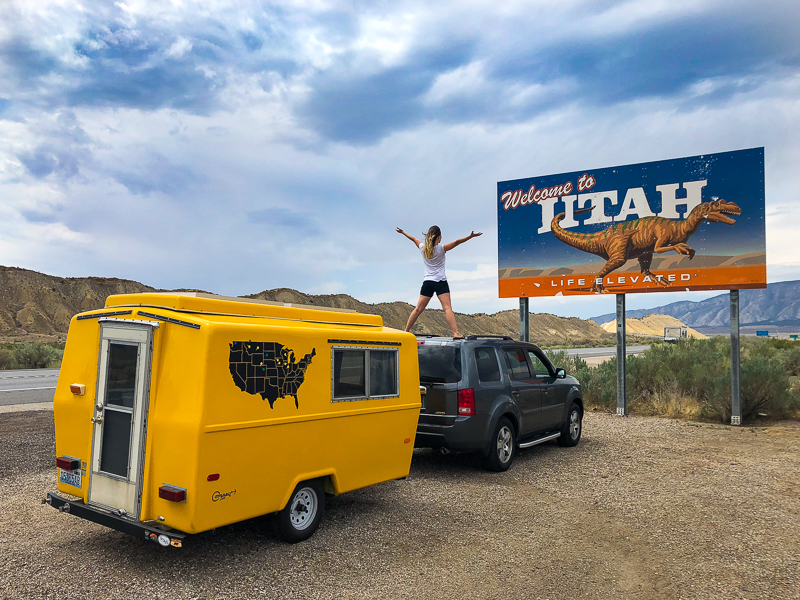 Apollo has a freshwater tank and greywater tank on board, which is great for off-grid parking. Then, one day, the hand pump just stopped working. This meant that off-grid water was not possible. So, for a short time, we didn’t have water or power. Our vintage camper was, pretty much, and expensive hard shell tent. I was so annoyed.

After the trip was over, we realized that we lost water pressure when we crossed over the Rocky Mountains (high elevation). The pump needed re-priming, which can be done easily by placing your finger over the water spout and pumping until pressure returns. If only I had thought of that during the trip (forehead smack).

Every single cabinet broke in Apollo during the 6,000-mile trek. Every. Single. One. I had installed clasps on all of the cabinet doors – the same as I did in my Tiny House – but I failed to realize how rickety my vintage camper would be going down the road. Shorter trailers move around a lot, so everything needs to be locked REALLY well. Needless to say, we spent a small fortune on bungees during this trip.

Our back left taillight stopped working at about mile 3,000. We believe this is an electrical issue (because the tail light is LED). Still, we couldn’t figure out where the electrical failure might be. Dangerous as it was, we drove the entire way back with only one taillight.

Apollo’s dining table broke. Well, it didn’t break, but the brackets bent and it doesn’t work properly. This was due to user error (I broke it in a clumsy fit). I’m brainstorming new table ideas because I loathed the original table design. It’s so heavy, I can barely lift it!

Oh, and the windshield on our tow vehicle cracked. 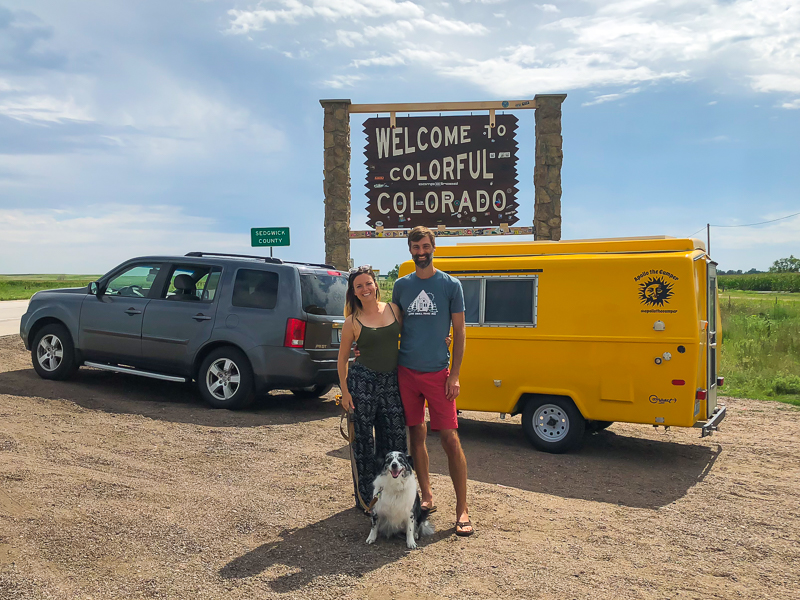 So… what now? Somehow we made it back home, limping with our tail between our legs. Apollo is recovering from his wild road trip; I’m still mad at him for falling apart. For now, I’m being cordial – nodding hello as I pass him in the driveway – but we aren’t yet on speaking terms. I haven’t even cleaned him out since he tossed my protein powder out of the cabinet and let it explode all over his insides.

But, soon, I’m going to fix Apollo. He’s going to be better than ever.

Have you ever had a cursed road trip?