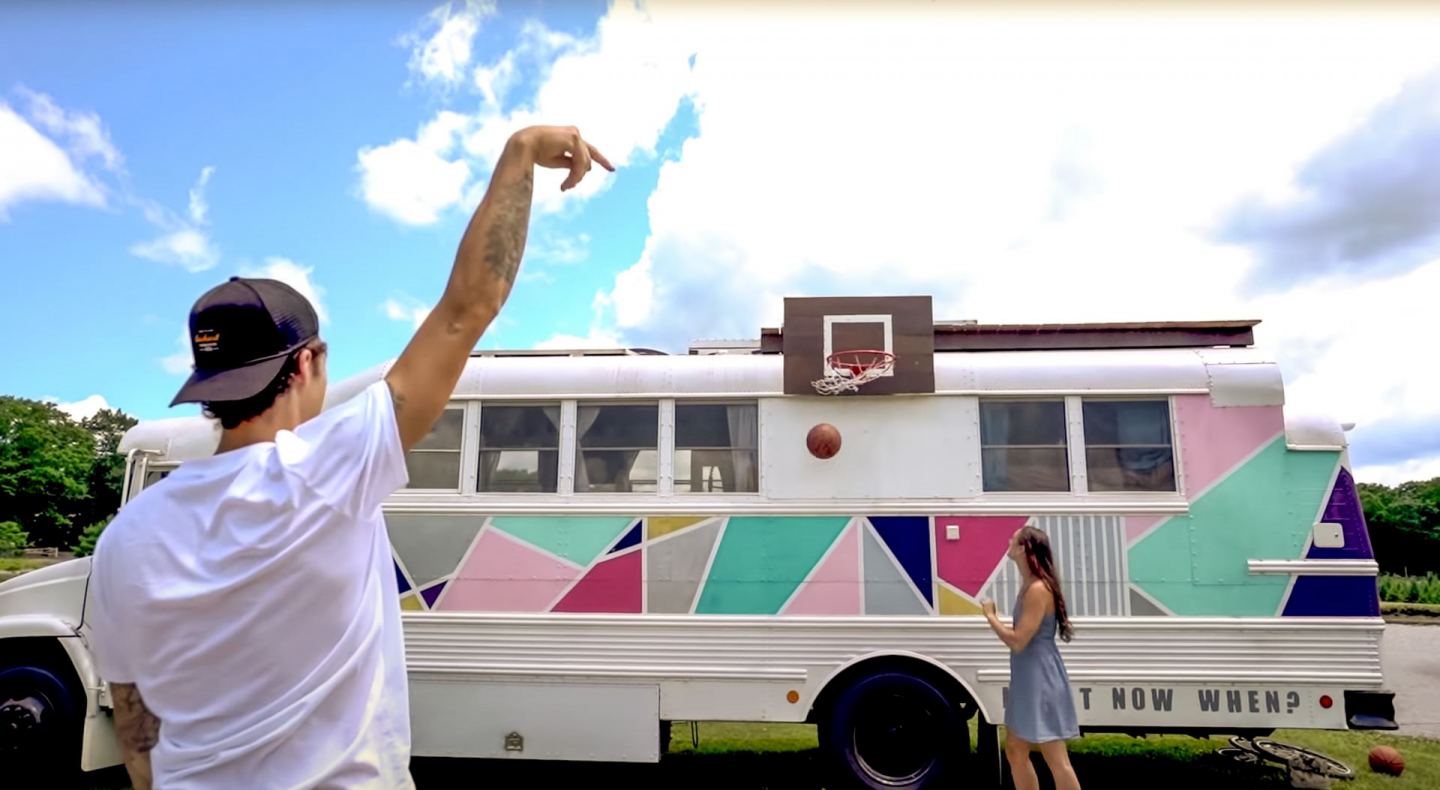 This week’s featured Tiny House really resonates with me. You see, my husband is 6’6,” and when we met, I was already living in my Tiny House. When he would visit my house, he would bang his head in various places. I wasn’t willing to redesign my house to fit his tall frame. It’s my house after all! Now that we’re married, things are a little different, but I still can’t do a full redesign. I would have to reframe a lot of my house, and it’s just not worth it. If only I would’ve known about him before I built my house! But that’s not the story I’m telling today. Instead, you’re going to meet a tall couple, who built their skoolie home to fit their tall frames! How? They raised the roof!

Raising the Roof on a Skoolie Home

I’ve seen a few skoolie home roof raises over the past few years, and every time it looks like a big ole’ pain in the butt! And, according to Kels and Jay (the owner’s of today’s feature Tiny), my assumption is correct. The roof raise was the hardest part of their build out, and they woudn’t recommend doing it as amateurs. In fact, while attempting to raise the roof of their skoolie home, the roof collapsed on them! It was very scary, but luckily no one was serious injured. Kels and Jay eventually succeeded in raising their roof, which was VERY important since Kels is 5’11” and Jay is 6’5″! Without a roof raise, living a school bus wouldn’t be possible. 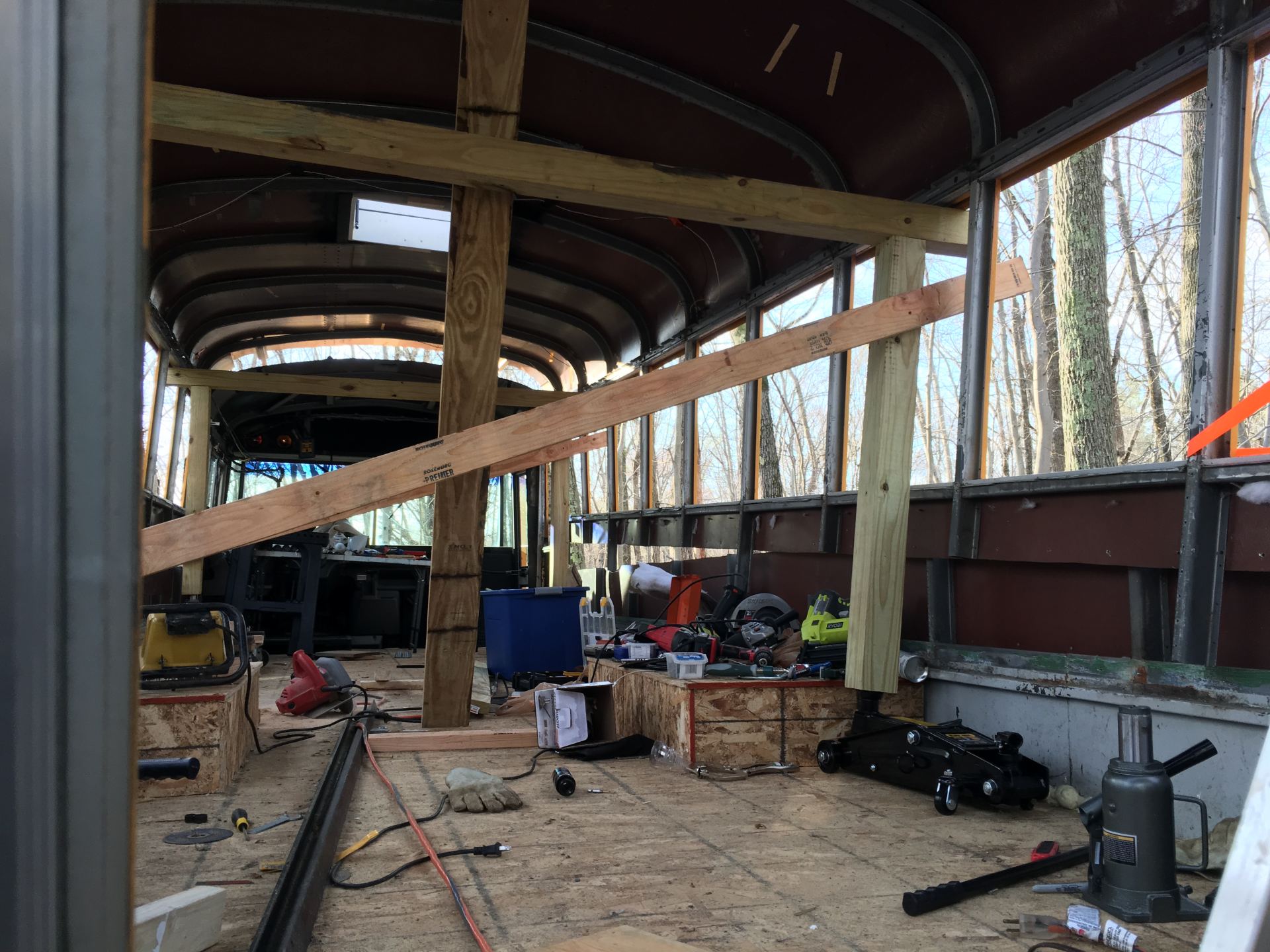 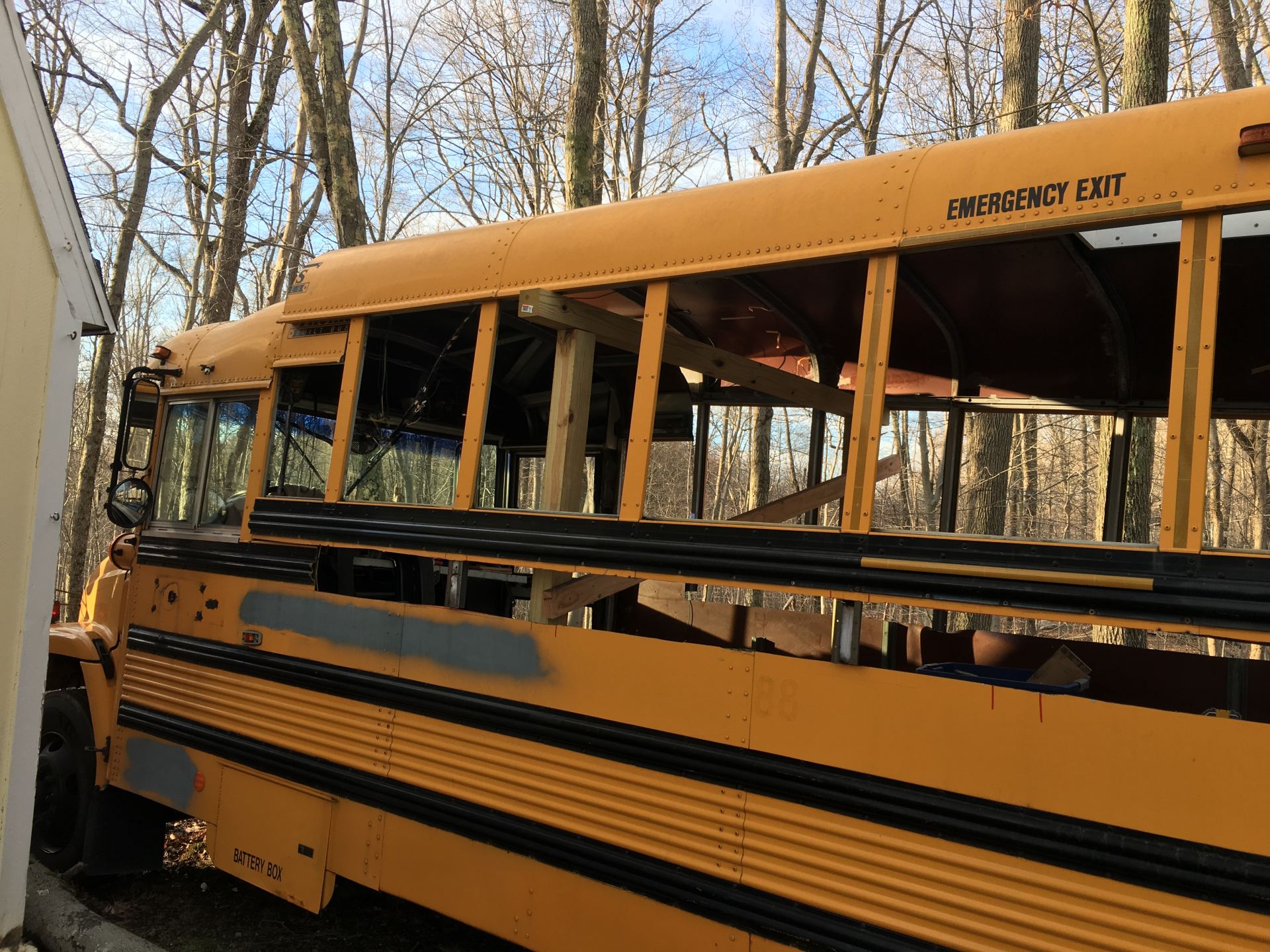 Kels and Jay were able to save a lot of money by purchasing the extra metal needed from a scrap yard. In fact, they did the whole skoolie home conversion on a very tight budget. They built a Skoolie Home for just $26,000 (including the bus purchase price)! That’s incredible affordable, even in Tiny House terms. If you’re curious what I spent to build my Tiny House, click here for am itemized cost breakdown and explanation. 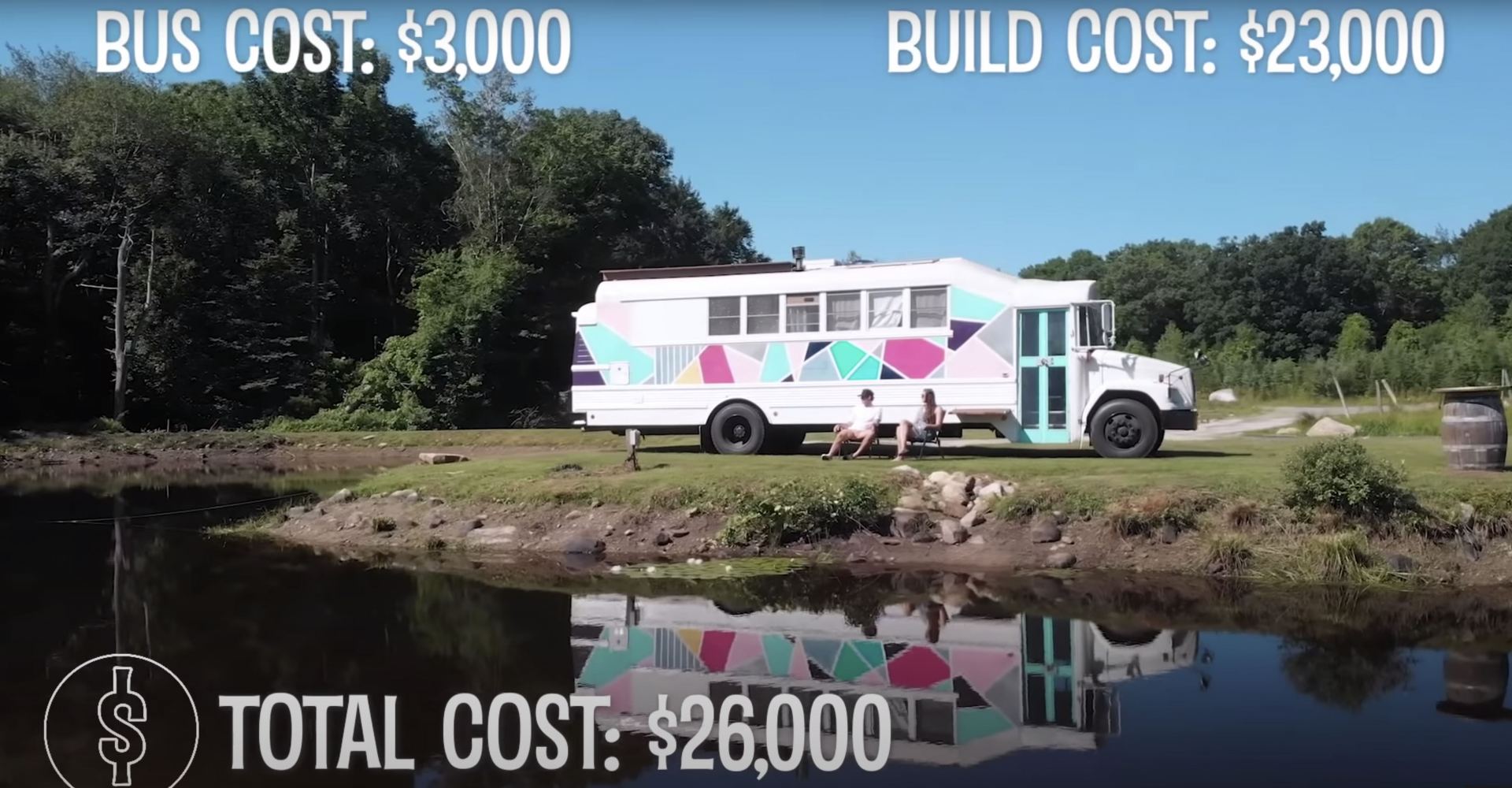 Kels and Jay met while Kelsey was over in England playing basketball. They both have a passion for the sport, so they found a way to incorporate a basketball hoop into their skoolie home! It’s even regulation height (10 ft)! They remove the hoop and store it in the back of their skoolie whenever they move. Now they can shoot hoops wherever they park. 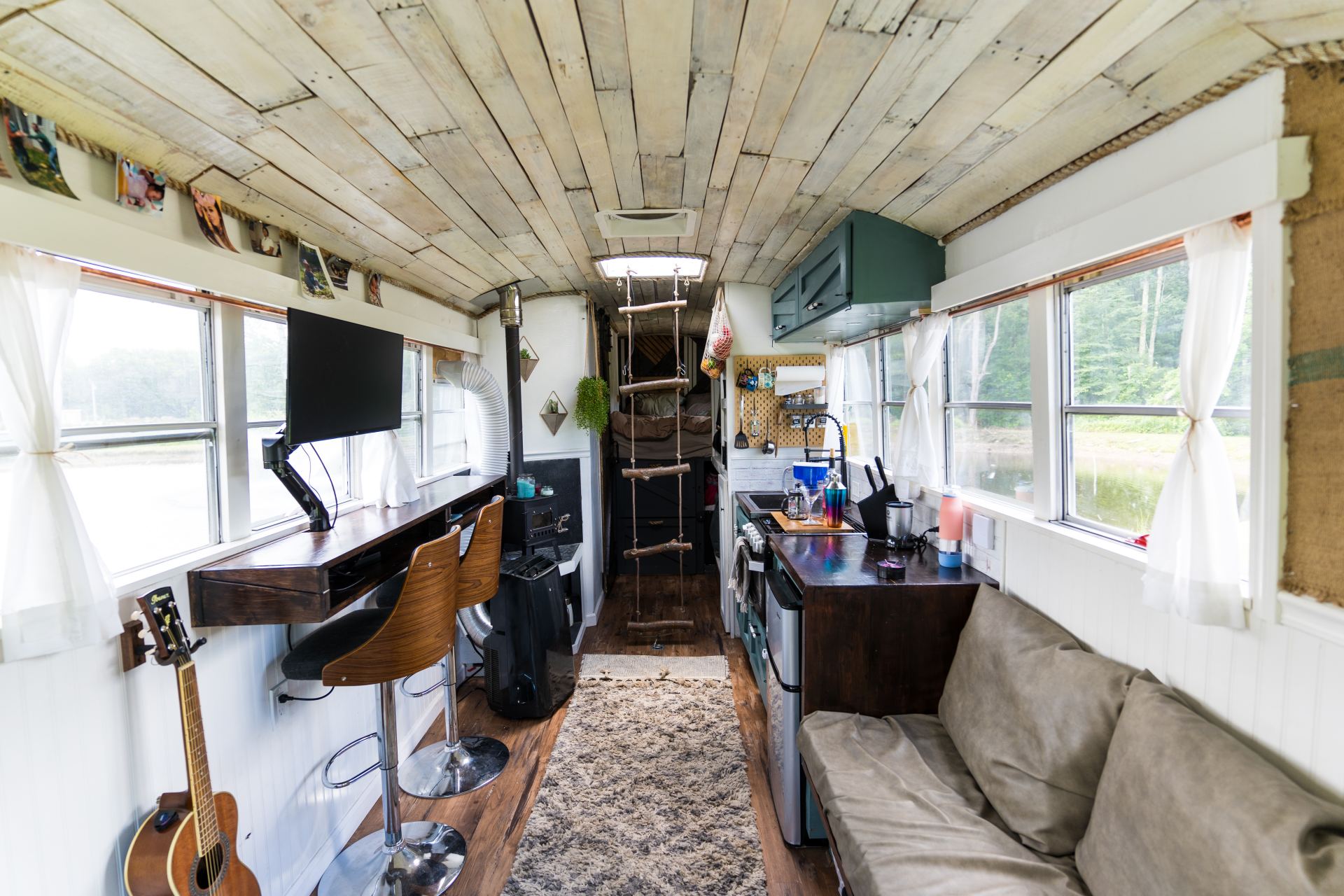 Other Features of Kels & Jay’s Bus: